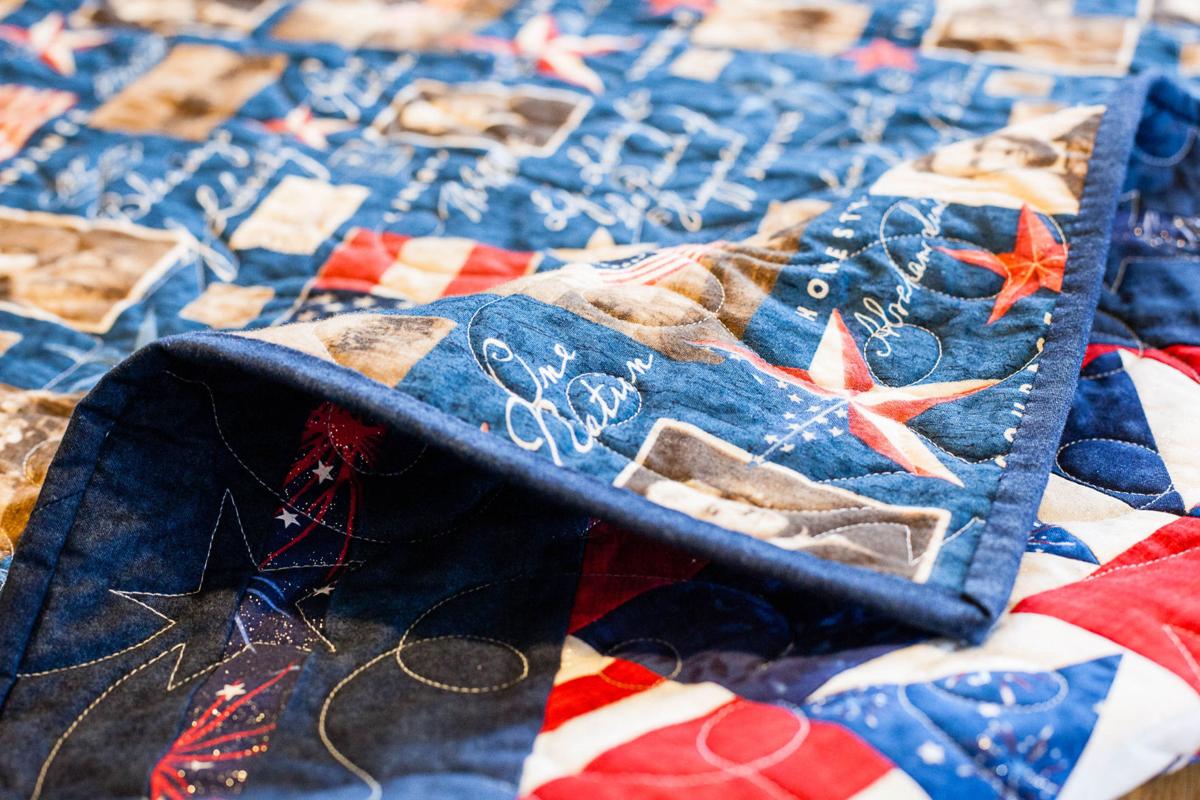 A fan of the annual Loyalty Days celebration made this patriotic quilt in honor of the occasion. The quilt will auctioned. 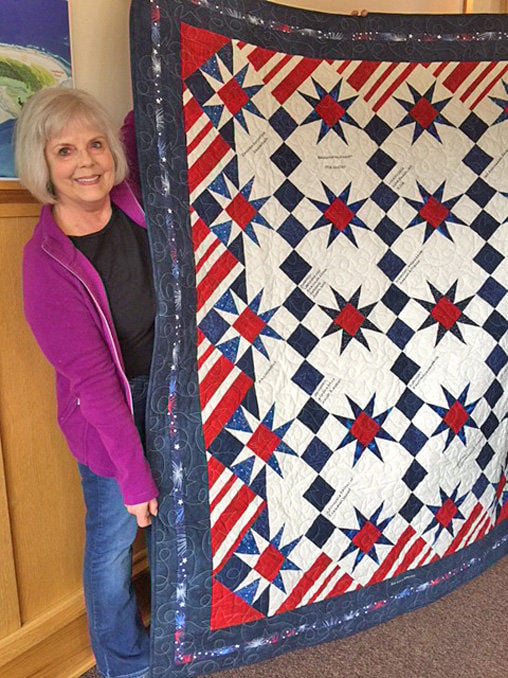 Ilana Canale displays the quilt she created for 2016 Loyalty Days.

A fan of the annual Loyalty Days celebration made this patriotic quilt in honor of the occasion. The quilt will auctioned.

Ilana Canale displays the quilt she created for 2016 Loyalty Days.

LONG BEACH — This is the sixth year that artist Ilana Canale has donated a quilt to be auctioned off as a fundraiser at the Loyalty Days Banquet. A longtime oil painter, she seems to bring that keen sense of color and composition into her fabric creations. In previous years, her quilts have received big money bids at this event. With two of them, the gavel dropped at $1,000.

Canale, a part time Long Beach resident from Vancouver, donates all the materials and labor to produce these quilts that prompt almost frantic bidding. Each year, she’s investigated facts about the featured patriot and designed her quilts accordingly.

“I’ve been really impressed with the speakers,” Canale said Friday, from her Long Beach cabin. “It’s like a history lesson.”

She calls this year’s quilt design “more Americana,” than some of her previous designs. Her husband Andrew, a contractor, commented, “I think this is the best one.”

History pertaining to the featured patriot for this year’s Loyalty Days provided Canale with more than enough information and inspiration for both sides of this quilt.

“It’s Benjamin Franklin,” she said. “He did a lot. He was an amazing person. I researched to see what I could incorporate into the quilt.”

In addition to the overall Americana design and patriotic colors, some of Franklin’s accomplishments are highlighted in machine embroidery on blocks of the front side, things such as “Abolitionist and Poor Richard’s Almanack,” Canale said.

Canale was impressed by Franklin’s list of virtues. “He had 13 that he followed and I put all those on the back of the quilt.”

That’s right. Canale quilts aren’t just unique on the front side. She explained, “I think if you’re going to make a quilt, you might as well put something decent on the back.” For the last three years especially, her Loyalty Days quilts have featured “something patriotic” on the reverse side.

Patriotism is impressive in Canale’s mind. So is history, so it’s not surprising that her Long Beach cabin was built in 1924. Andrew added on, building an upstairs master bedroom and bath, and incorporating a sewing area. On a counter rests a Singer sewing machine with quite a history of its own. Canale received it as a Christmas gift from her parents in 1965, when she was home for the holidays, from her first year of college. She was no stranger to sewing, but needed a machine of her own.

She learned at an early age. “Mom taught us to sew when we were 10. She told us, ‘You make your clothes or you don’t have any.’” That same year, Canale’s grandmother passed away. About a dozen years later, Canale’s mother handed her a box of fabric, sewing supplies and a template. “Your grandma started a quilt for you.”

Grandma’s work on the quilt had progressed to just one narrow strip, “and it was the length of a king size bed,” Canale recalled. She finished it, even though she had a child in the house that could offer interruptions and some distraction. She learned to work around that. “I had a baby, but I did it anyway,” she says with a smile.

With that project complete, she continued sewing, but didn’t get back to quilting until about 1993. The resulting enthusiasm didn’t fade and she hasn’t stopped since. In every room of her Long Beach cabin, there are quilts of every size. In the living room, a long narrow horizontal wall hanging of sand pipers on a beach graces the west wall. On other walls, there are also some of her framed oil paintings. In the small downstairs bedroom, a quilted bedspread in her favorite warm colors blends with the wood furniture and wall, while lighter areas of the quilt brighten the room. She also has a stack of other quilts close to the bed. She commented that in her designs, she starts with the center design and builds her patterns around that.

At the top of the stairs is a geometric designed quilt on the wall and in the master bedroom area, quilts are everywhere. Also, on a wood chest at the foot of the bed, two colorful purses she made are displayed. Add to that the fact that she made “all the window coverings,” testimony to her many talents exists all over the dwelling.

Canale loves creative designs, including techniques such as batik and stippling. And soon, she will start a portrait-type quilt project based on a painting with brilliant colors, by artist Babette Beaty (www.babettesgallery.com). Canale first saw the painting in an establishment in Westport, Oregon and contacted the artist for permission to use it as inspiration.

Above the sewing machine hangs a quilt inspired by a castle in Paris. The detail is intricate, clear down to the handles on the castle door.

Her creative mind has endless ideas and her artist abilities, nothing less than amazing. “I do a little bit of everything,” she said, but in quite a modest tone. “I just like to be busy.”

That’s evident, with this year’s Loyalty Days quilt and the painstaking work necessary to make it.