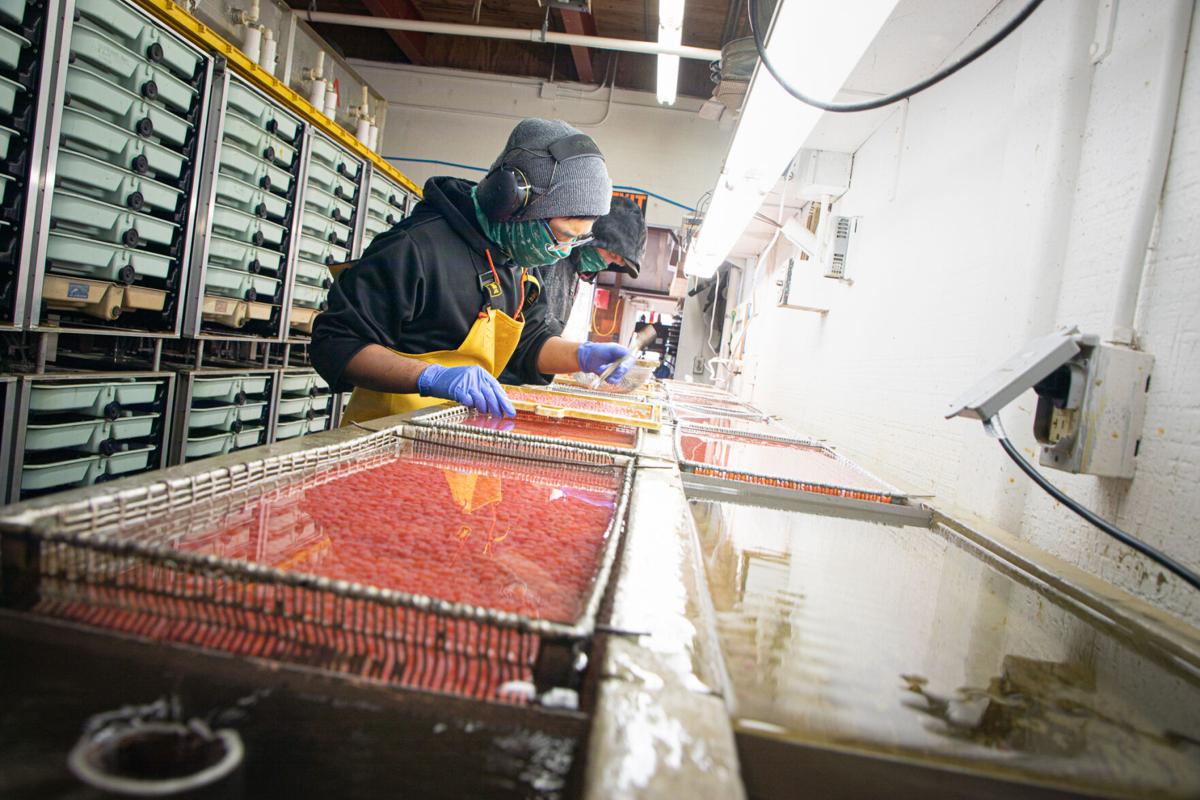 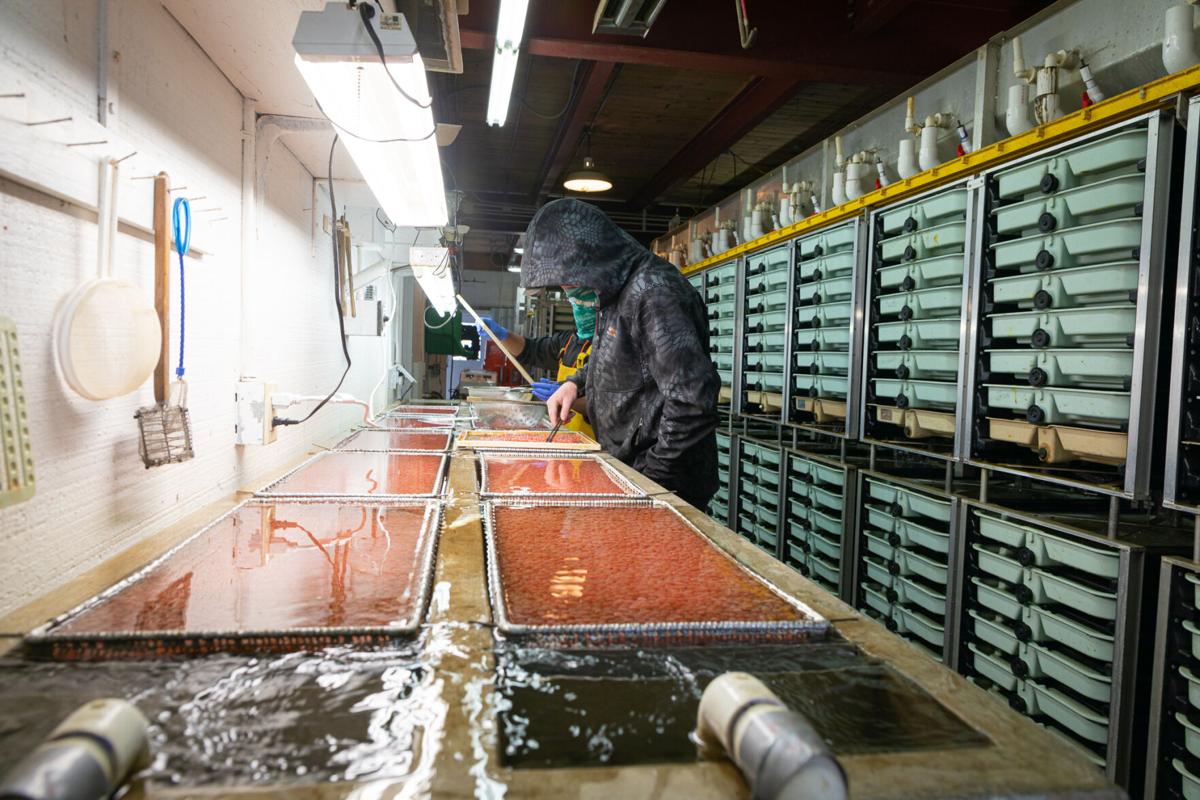 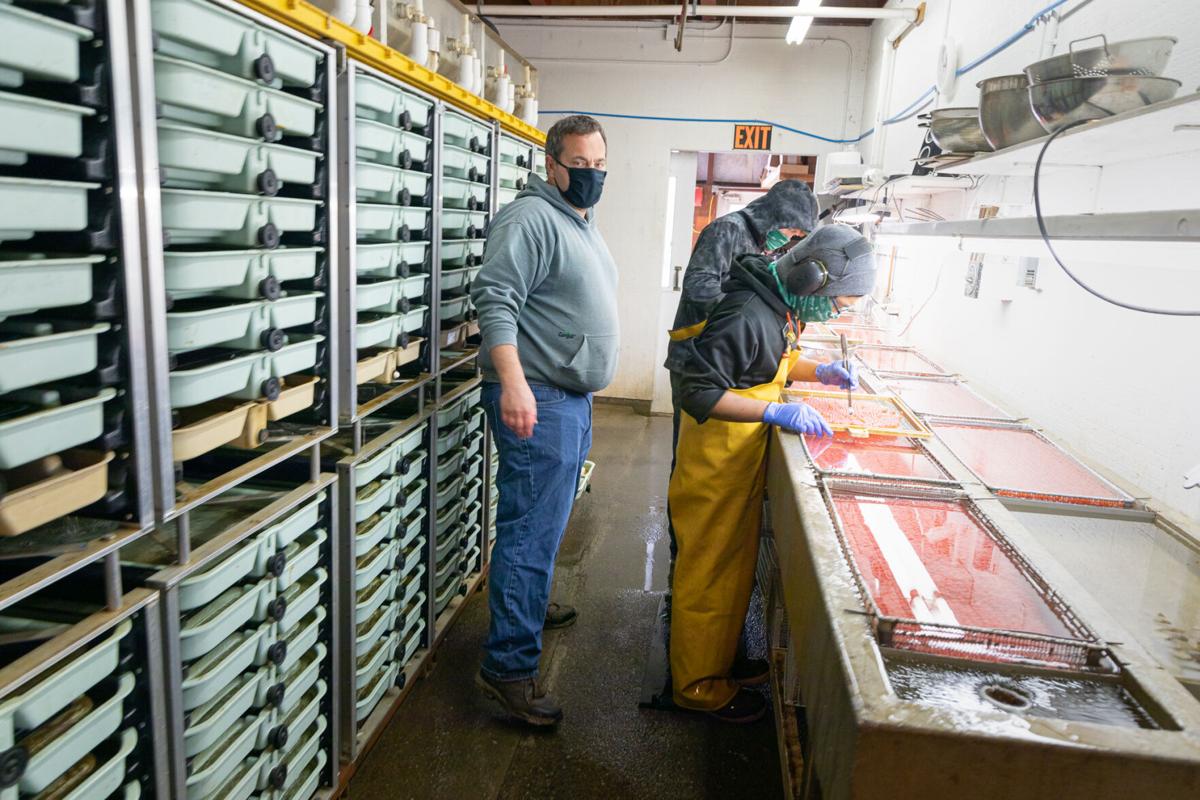 Hatchery Specialist John Larson, left, observes hatchery technicians sort healthy Chinook salmon eggs on Monday, Nov. 9 at the Naselle Salmon Hatchery. “Five years ago we were only releasing 800,000 Chinook. Four years ago it jumped up to 2.5 million. And now we’re releasing 5 million. It’s different in the fact that in my career I’ve only seen decreases, so it’s been refreshing to see some increases,” Larson said. 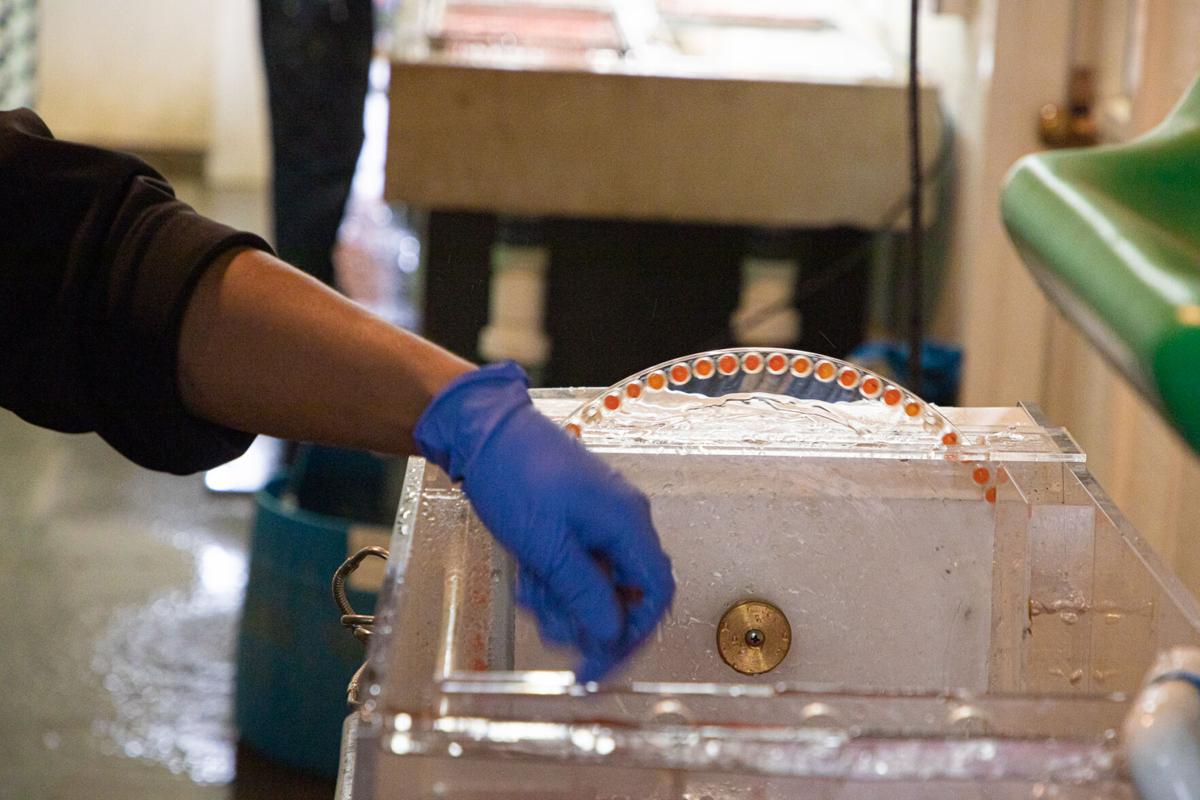 Chinook salmon eggs are processed through a Van Gaalen egg sorter at the Naselle hatchery. Any misshapen or undersized eggs are separated with the machine.

A technician walks along the weir to clear debris at the Naselle hatchery during the coho run in late September. The weir directs salmon into the hatchery from the Naselle River. Coho returns this fall far exceeded early predictions. The hatchery is playing a significant role in producing more Chinook salmon, the preferred prey of endangered orcas and a high-value catch for fishermen.

Part 2 in a series

NASELLE — The Naselle Hatchery has been “making salmon” for decades but has never before been so much at the forefront of rearing Chinook salmon popular with humans and orcas alike.

“We raise 1.2 million normal-time coho, 200,000 late-time coho, 5 million Chinook, 500,000 chum and 75,000 steelhead,” Naselle Fish Hatchery Specialist John Larson recently said. “Five years ago we were only releasing 800,000 Chinook. Four years ago it jumped up to 2.5 million. And now we’re releasing 5 million. It’s different in the fact that in my career I’ve only seen decreases, so it’s been refreshing to see some increases.”

The coho return has been exceptional on Willapa waterways this fall, including the Naselle — something of a surprise compared to most other recent years when returns haven’t been so abundant.

“We just wrapped up surplussing coho,” he said.

Larson and other hatchery staff are being exceptionally careful to avoid catching covid, something that would seriously impact salmon production at a crucial stage. Public visits to state hatcheries are banned for now, but WDFW made cautious arrangements for a local reporter.

Attention at the Naselle Hatchery has largely turned to picking Chinook eggs in recent days, this year’s iteration of an intense state and federal effort to produce more of the Pacific Northwest’s most iconic salmon.

One of four hatcheries operated in Pacific County by the Washington Department of Fish and Wildlife, Naselle is a crucial part of efforts to enhance survival chances for Southern Resident Killer Whales. Making their home along Washington’s outer coast and Puget Sound, only 74 of these orcas remained in 2018 when Gov. Jay Inslee issued an executive order aimed at improving their chances. After recent deaths and births, their population remains at 74, according to the Center for Whale Research.

“It’s difficult to imagine a Washington without orcas or salmon. These species are part of the cultural identity, fishing economy and tourism industry of our region. But both Washington’s Southern Resident orcas and Chinook salmon are facing a dismal fate,” the governor’s office said in 2018.

In addition to major spending on improving natural spawning conditions for Chinook, investments in state hatcheries “can play an important role in increasing prey abundance for Southern Resident orcas in the near term (three to 10 years) as increasing natural Chinook stocks will take more time,” according to a state policy brief from January 2019.

Nearly $12 million in operating funds and $75.7 million in capital investments were provided for the state hatchery system. The 2018 budget directed $8 million for Naselle facility upgrades.

These investments are starting to pay off, in the form of more adult Chinook returning to the hatchery with their eggs. This in turn should mean more salmon in the ocean for orcas and fishermen.

There are four full-time staff and three temporary employees helping handle the load.

“Right now they’re picking eggs. Up until this point the eggs are very sensitive — if you touched them you would kill them, but once they get to where they have an eye they can bounce around a little without hurting them,” Larson said.

The machine automatically sorts those that are misshapen or too small and counts the remainder. The pink-colored eggs are then hand inspected for their signature black speck, signifying eye development. Any discolored or underdeveloped eggs are removed.

“The bad ones are white,” Larson said, adding that they suffered some egg loss this season likely from warm water.

The eggs are then weighed and quantified using a specific per-pound formula.

“This gives us our best enumeration until they go into the clipping trailer; every fish gets clipped,” Larson said.

The eggs will hatch in about 10 days, then will start being fed about four weeks later.

Jimmy Carter was president and “Rocky II” was gracing movie screens when the Naselle Hatchery was constructed in 1979. A little more than 40 years later, it’s evident that time and erosion have taken a toll on the facility and surrounding structures. Roofs sag and pond walls pull apart from the shifting soil. But it’s what’s underground that’s posed the biggest problem.

“One of the things we’re plagued with is our aging pipeline. It’s had a couple of leaks and our ponds have settled so they actually kind of flow uphill now. When you turn the water off, you have puddles of fish that can’t get out. A lot of infrastructure has aged and shifted,” Larson said. “If you look at our pump house, the roof sags where it’s settled.”

The Trans-Atlantic Pipeline, built between 1973 and 1975 to carry oil roughly 800 miles across Alaska, impacted the Naselle Hatchery project occurring over the same period thousands of miles away.

“The hatchery was built in 1979. The pipe that they had available was poor. All the good pipe was going to the Alaskan Pipeline,” Larson said. “It was an inferior, thin steel — and just wasn’t very good.”

The new pipeline is 32-inch diameter high-density polyethylene that will stretch approximately 2,500 feet from Crusher Creek.

“That was one of our big challenges, the way they do HDPE pipe,” said WDFW Construction Project Coordinator Steven Harrington. “It has to fused in sections. They welded it in 100-to-200-foot sections and then snaked it underneath all the existing utilities.”

Laying the new pipeline was among the most ambitious and expensive undertakings of the first phase of Naselle upgrades.

“That’s where a lot of the money was spent,” Larson said.

Securing parts amid the ongoing covid crisis, particularly fittings and valves, has been among the biggest hurdles, Harrington said.

Common practices in salmon management have changed significantly from the 1970s, among the biggest is clipping fins to better monitor hatchery fish stocks.

“One of the big changes is that all of our fish are marked with the adipose fin clip,” Larson said. The clipped fin lets fishermen know the Chinook they’ve hooked is from a hatchery and can be kept. Naturally spawned salmon fins are intact.

“We used to be able to put 3 million Chinook in this pond right out of the incubation room, feed them and release them,” he said. “Now we have to start them, get them out of the pond into a marking trailer to take their fin off before they go to another pond. It’s important for the fisheries to be able to have mark-selective fisheries to harvest the hatchery fish while preserving those with natural origin.”

One of the first signs that changes were needed at the hatchery occurred nearly a decade ago, before Larson started.

“There was a fish loss in 2011 when the pipeline broke down by the adult pond,” he said. “They had to truck all the fish off in order to fix that leak. That was kind of the beginning.”

The ongoing threat of power failure persists, especially with an unreliable generator from 1979.

“It goes out frequently,” he said. “A couple summers ago we had the power go out and the generator not function, but just by the skin of our teeth we kept the fish alive.”

As recently as a few weeks ago, they had to rely on the back-up generator when they lost power for five hours.

Power outages in the summer often stem from a particular spot.

“A lot of times, it’s the in-ground wire on North Valley Road — it’s aging. We typically lose power in the summertime because the ground dries out and pulls the insulation back,” Larson said.

Construction crews broke ground on phase one of the project around June and were anticipated to finish last week.

Phase three will include new adult ponds and an incubation room.

Can you solve these real 'Jeopardy!' clues about comedy movies?

States doing the most and least COVID-19 testing