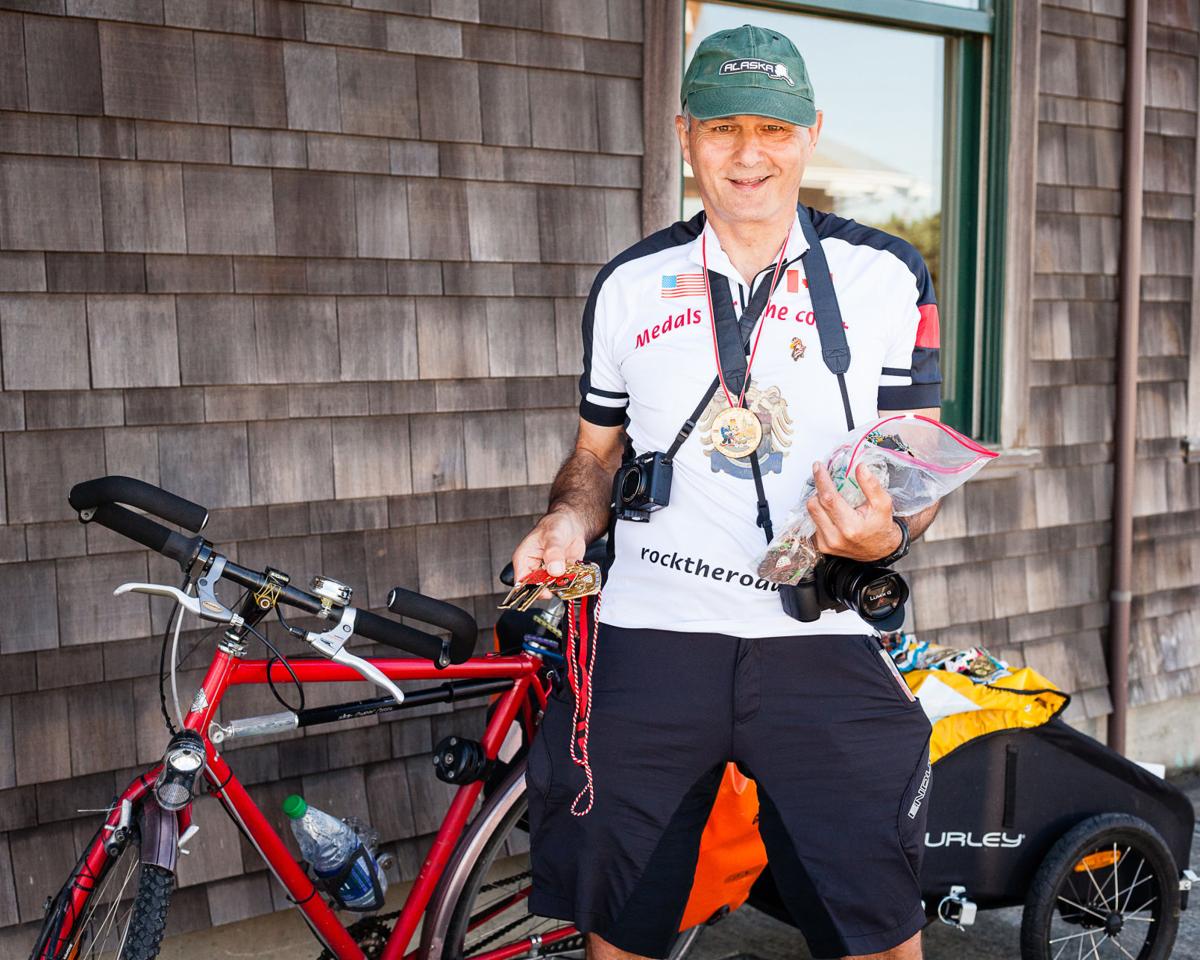 German cyclist Klaus Luttgen is hauling a cache of unique, collectible souvenirs from Cologne's famous carnival celebration, as he cycles from Vancouver, B.C. to San Fransisco. When he still had all the medals, they added about 125 lbs to his load, he said. 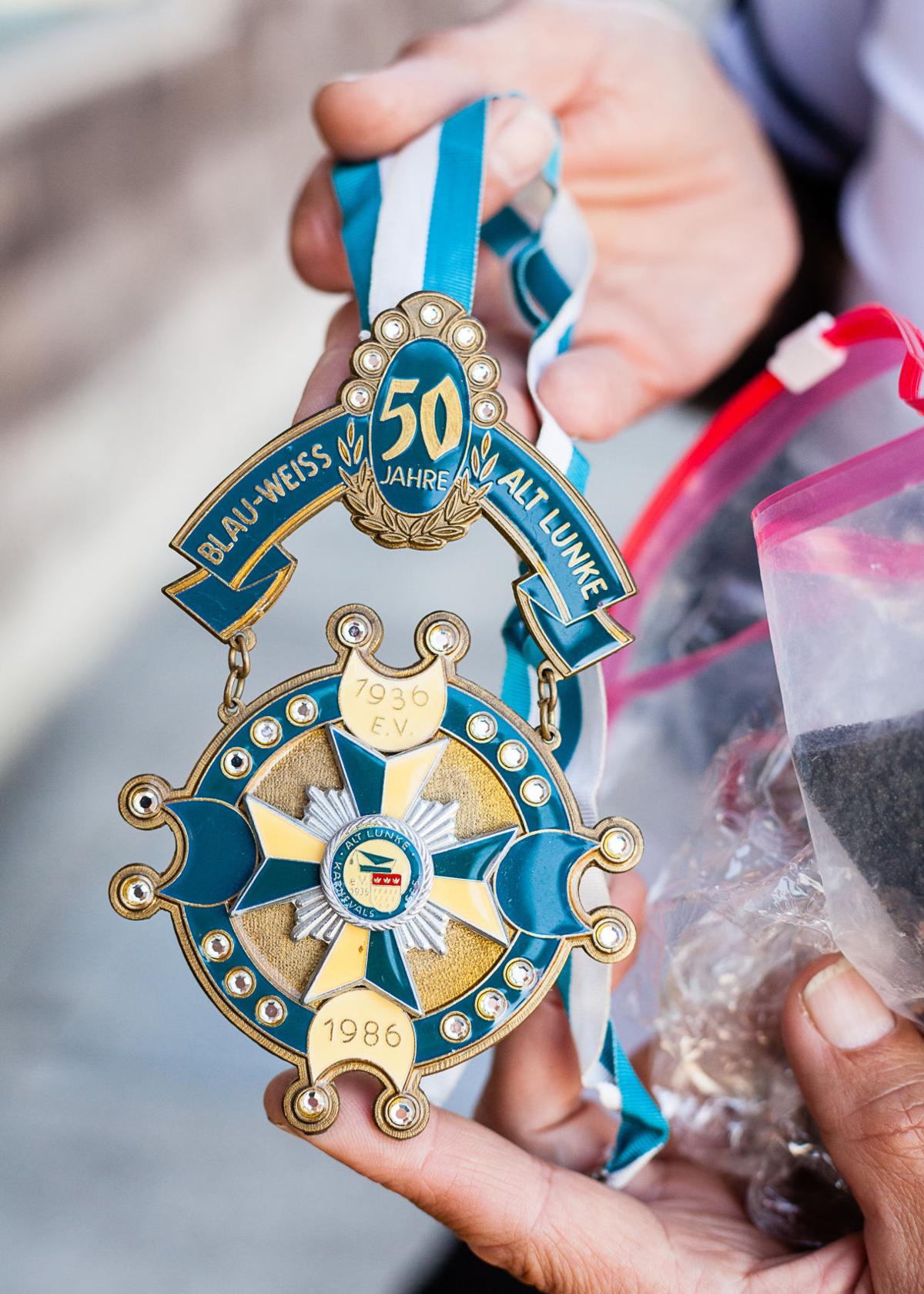 The souvenir ‘carnival medals' vary widely in appearance. Some, like this one, have elaborate, multi-piece designs, and can be quite heavy. 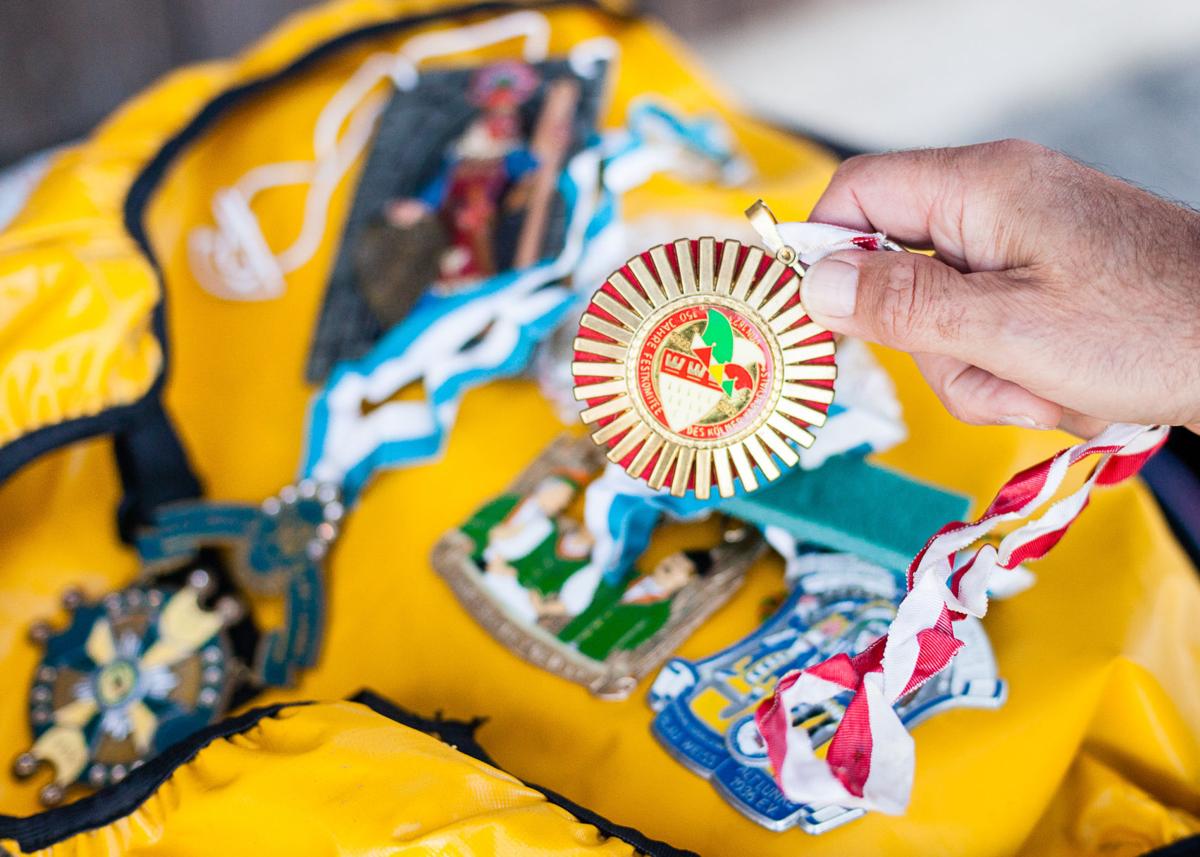 Luttgen inherited about 20,000 of these souvenir medals from Cologne's famous Carnival celebration. In honor of his father, he has been giving them away to friends he makes while cycling through the American West.

German cyclist Klaus Luttgen is hauling a cache of unique, collectible souvenirs from Cologne's famous carnival celebration, as he cycles from Vancouver, B.C. to San Fransisco. When he still had all the medals, they added about 125 lbs to his load, he said.

The souvenir ‘carnival medals' vary widely in appearance. Some, like this one, have elaborate, multi-piece designs, and can be quite heavy.

Luttgen inherited about 20,000 of these souvenir medals from Cologne's famous Carnival celebration. In honor of his father, he has been giving them away to friends he makes while cycling through the American West.

PENINSULA — German cyclist Klaus Lüttgen always thought he would have time to repair his difficult relationship with his father, Karl Lüttgen. But when the older man died alone in his apartment at the age of 77, the two were still distant.

Having missed his chance to make amends with his father, Lüttgen, 57, is instead bringing a message of peace and friendship to the people he meets during his six-week-long pedal from Vancouver to San Francisco, by giving away many of the thousands of elaborate souvenir “Carnival medals” he inherited after his father’s 2008 death.

By sharing the medals, and the story of how he came to own them, Lüttgen said he is fulfilling two almost life-long dreams: to experience the “grandiose” western landscape at close range, and to pay tribute to the father he knew, but never really understood.

“It’s a big dream for me to see this big land, this great land,” Lüttgen said, during a Sept. 9 visit to the Peninsula. Trim, and deeply tanned from his time on the road, Lüttgen wore cycling gear, a tangle of cameras around his neck, and the seraphic expression of a man who is free to follow his own fancy. Speaking in good, but heavily accented English, Lüttgen sometimes struggled to find the right words, but still told a compelling story about how he came to be pedaling down the West Coast, with nearly 125 pounds of German Carnival souvenirs in tow.

While growing up in Cologne, a 2,000-year-old city on the bank of the Rhine River, Lüttgen dreamed of exploring the American West — a place that seemed vast, and new and wild, compared to historic, traditional Western Germany.

“I wanted to be like a lumberjack — making wood and houses and living with the bears — all these idea you have when you are a young boy,” Lüttgen recalled with a laugh.

Perhaps, the freedom of frontier life was so intoxicating to Lüttgen, because he grew up in a family that had been deeply affected by war and loss. In a 2013 post in his personal blog, Lüttgen described how his mother and her family had to flee from Poland during World War II. She died when Lüttgen was still a child, so he grew up with few real memories of his mother.

Meanwhile, his father threw himself into his job at a large local company, and his passion for collecting a uniquely local cultural artifact.

Cologne is famous for its dazzling medieval architecture, and its huge annual Carnival celebration. Starting in November, the city celebrates the beginning of the “fifth season,” the months-long series of rituals and celebrations that culminates in a week-long street festival, usually in early February.

Though Cologne’s festival is similar in some ways to other Catholic pre-Lenten festivals, like Mardi Gras in New Orleans, or Carnaval in Rio, it has a uniquely German feel. The numerous parades, parties, performances and other events often involve elaborate costumes and huge crowds — the website for a local tourism authority estimates that the event draws at least a million visitors each year.

One unique aspect of the celebration is the “medals.” Starting in the 1800s, the dozens of clubs that sponsor Carnival events began commissioning these wearable souvenirs. Over time, they’ve evolved, from small, modest brass and ribbon pins with a military feel, to large, colorful badges that can be hung around the neck. Revelers buy them for a few Euros apiece, and some, collect and sell or trade them. But few ever accumulate as many of the medals Karl Lüttgen did.

By the time he died, he had been collecting for over 40 years, and his collection had grown to fill an entire room. Lüttgen left home as a fairly young man, so he and his sister didn’t fully comprehend how many medals their father accumulated until they inherited more than 20,000 apiece.

Following his father’s death, Lüttgen was filled with regret.

We want to make … freedom,” Lüttgen reflected. “But we say, ‘OK, we will make it tomorrow, we will make it next week.’ You love your parents, but you can’t go back.” For a year or two, he struggled to make sense of their fractured relationship, and with what to do with his enormous cache of carnival medals.

In about 2010, he found the impetus to do something about both dilemmas, when he lost his job. Rather than going right back to work, he decided to donate the majority of his inherited collection to a museum, sell some, and use the rest to pay tribute to his dad. He sold his refurbished vintage Yamaha motorcycle, packed up a couple hundred of the remaining medals, and booked a ticket to Alaska.

On that trip, Lüttgen wanted to experience the elements. He wanted to live in the moment. And, he wanted his father’s wisdom to guide him. As he pedaled more than 4,000 miles across Alaska’s vast landscape, he tried to listen for his father’s guidance; to do things the way his father might have done them.

As he cycled along with his trailer full of medals, curious people often stopped to ask him about his heavy cargo. He found that they were often delighted with his story, and with the medals that he often spontaneously gave away. He made a lot of friends in unexpected places.

“People were happy for this,” Lüttgen said. “I gave them a Carnival medal, and got goodness for him, and for me too.” One day, while riding through the Yukon, a man from Sitka saw him and pulled over. Upon hearing that Lüttgen was from Germany, the man, who was named Nathan, let out a surprised laugh, and gave Lüttgen a cookie he’d just purchased at a German bakery in a nearby town. Lüttgen gave him a 1973 medal.

With each gift, he felt a renewed sense of liberation and relief. The spontaneous friendly exchanges gave him the energy to keep going on hard days. By the end of his four-month-long trip, he had given away about 250 medals, and he found that he had let go of much of the grief and confusion that had fueled his sometimes grueling trip.

He would find himself thinking, “I am so lucky, but I am so tired,” Lüttgen recalled “... and then, in this time, it was OK for me and I only wanted to go home.”

Five years later, a lot of things are better for Lüttgen. His trip to Alaska became the subject of a two German documentaries. He has a girlfriend, and a new job, processing data for social service agencies. He feels more at peace with his past. But he still wanted to see more of America, and give away more medals. So after saving up all of his vacation time, he decided once again to load up the bike trailer, and see the West Coast. This time, he said, the trip is a tribute to his sister.

Since setting out from Vancouver, B.C. in late August, he’s given medals away at ranger stations and fire stations and lighthouses on the Olympic Peninsula. He’s given others to friendly strangers, including people he met while staying at Cape Disappointment. At the Cape D ranger’s station, he spoke with a woman whose grandma was from Germany. She gave him fruit, he gave her a medal.

“Only for kindness, not for money!’ Lüttgen explained.

Lüttgen will fly back to Germany from San Francisco in early October, but he hopes it will not be his last trip to the U.S. He wants to come back with his girlfriend, for a more leisurely, bike-free tour. And he wants to see Yosemite, Yellowstone and the Grand Canyon.

“Bringing Carnival to the U.S.,” and following in the footsteps of other adventurers — especially Lewis and Clark — has been everything he hoped it would be, he said.

“This is for me very interesting — the expeditions, crossing America, you know?” Lüttgen said. “I’m like a little boy, you know? This is wonderful.”

From screen to stage! 10 movies that became Broadway musicals