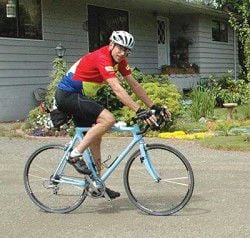 <I>KEVIN?HEIMBIGNER/Chinook Observer</I><BR>Mike Matthews starts off on an "easy ride" of 32 miles near his home in Rosburg. The retired Naselle teacher and coach is training for the National Senior Games in August in San Francisco. 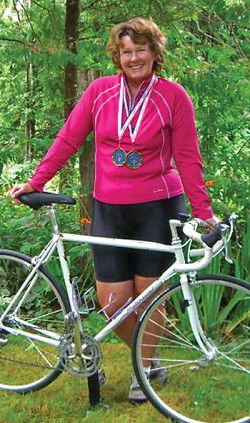 <I>KEVIN?HEIMBIGNER/Chinook Observer</I><BR>Mike Matthews starts off on an "easy ride" of 32 miles near his home in Rosburg. The retired Naselle teacher and coach is training for the National Senior Games in August in San Francisco.

ROSBURG - Mike Matthews grew up tooling around Ocean Park on his bike. Now over a half-century later the retired teacher and coach is training for 40 kilometer (24.86 mile) and five kilometer (3.11 mile) race in the 60 to 64 division at the National Senior Games in San Francisco Aug 7 and 10. "Other than my wife and family, training is my first priority. Being retired I don't have enough time to do everything I want to do, so I have to be efficient with my workouts." Matthews says with conviction.

"I ride hard three times a week, usually from 20 to 50 miles for two or three hours unless the weather is really nasty, then I use the trainer downstairs," Matthews explains. "This morning I rode 32 easy miles and once a week I ride with a cycling club in Astoria."

Matthews enjoys the tactics and competition of the 40K road race, but isn't as fond of the 5K timed sprint. Diane, his wife of 43 years says, "I like the shorter races." She won 2005 and 2006 Washington Senior Games championships in cycling. "Our first date was playing tennis and I beat Mike. He was so competitive that he got upset," she laughs.

Matthews graduated from Ilwaco High School in 1964 where he played football, basketball and track, but his first love was baseball. "I pitched a no-hitter in Little League against Ilwaco and one kid was thrown out at first base by our leftfielder to save me," he recalls. He worked summers at the Shell gas station on Bay Avenue in Ocean Park and later for Bumble Bee Cannery in Ilwaco. He earned a teaching certificate from Central Washington State College (CWSC) in 1968 and a master's degree in education in 1971 from Western Washington University.

Matthews taught 12 years in the Kent School District, five years at the middle school and seven at Kent-Meridian high and he also coached basketball at the junior high through junior varsity level. "In 1980 we got tired of living in the city and bought our present home near Rosburg. Luckily I got a teaching job at Naselle Youth Camp that same year," he says. He taught nine years at NYC school and nine years at Naselle grade and middle schools.

He coached varsity girls' basketball seven seasons and currently helps as a volunteer coach. Upon retirement after 30 years Matthews put in parts of six more years teaching at NYC. "I was able to start a small engines class and a sign shop class. Both were commercial business successes as well as great learning experiences and they are what I am most proud of from my teaching career."

When Matthews reached 16 years old, his preferred mode of transportation shifted from bicycles to cars. "It wasn't until 1971 that I decided to buy something called a 10-speed bike. I bought another bicycle two weeks later and the next thing I knew I had 29 bikes. Diane got a five-speed and we were hooked. Now we 'only' have 25 bikes between the two of us," he grins.

Diane, who met Mike at the freshman dance at CWSC, became a teacher's aide at Naselle and the couple commuted to work 12 miles one way on a tandem bicycle. "Mike made that bike and also the one I rode in the state championship races. I owe my success to good equipment," she jests. "I liked commuting on my bicycle because it incorporated my training into my normal day and we had to have teamwork to be able to ride tandem with log trucks whizzing by," he explains.

The longest race the Matthews completed was the Seattle to Portland 200-mile ride and they did that in 14 hours. Mike is hoping to average about 25 miles per hour in the 40K at the Nationals and has hit 45 miles per hour going down K-M Mountain's west slope. "I made the Naselle-Chinook-Willapa Bay loop in one hour, 51 minutes and averaged about 23 miles per hour the other day." Matthews also competed in biathlons, but doesn't anymore because "I can't run. A lot of the cyclists are former runners who have injuries like I have. When your tires are two inches from someone who doesn't have a lot of cycling experience then that can be scary."

The only serious mishap he has suffered in his thousands of miles on two tires came in 1981 when a fellow-cyclist accidentally struck him while driving in front of Naselle High School. "I was out for about 10 minutes, but didn't have any permanent injuries. Last thing I remember was seeing nothing but headlights and jumping off my bike."

The couple was featured on the TV show "Pedaling in Paradise" as they circumvented Mount Rainier. Their sons Shaun and Kyle live in the area and are married and there are four grandchildren ages four to 15. "We spend time following their sporting events and we kayak and take a family backpack trip in the Cascades every year and we have gone on four-week, 1,000-mile cycling trips with our kids when they were younger," Matthews explains. "I do a little carpentry and Diane has a vegetable garden and raises chickens and then I have a couple of car projects I'd like to get to."

Taking a breath he says, "I discovered my grandfather (Eddie Smith) earned three cycling medals in the 1890s in Rhode Island and my dad (Art Smith) was a very good athlete, especially in baseball. He was a carpenter, golfed and played volleyball at age 80. One of my life goals is to be like him, being very active later in life. Besides, if I ride for two or three hours I can eat more of my wife's cooking, especially her homemade bread."

Four years ago Matthews opened a cycle repair shop in Rosburg and he custom-builds bicycles as well (call 360-465-2320 for information). "Jim Noonan graduated with me in '64 and he won fourth and sixth place cycling medals at the National Senior Games in 2007. I'd like to get in the top 10 in the 40K," Matthews relates.

"I love being on a bike, the rhythm of it, the way it is such a simple machine, yet so efficient. Diane says the bike sings when she is riding. That's why I love riding; not to train, but to feel the rhythm. I guess that was born into me."

National Senior Games and the kilometer

The National Senior Games Association is under the auspices of the U.S. Olympic Committee and is dedicated to motivating senior men and women to lead healthy lifestyles through competition. The organization governs the National Senior Games, the largest multi-sport event in the world for those over 50 years of age.

The NSGA is also an umbrella for 33 state organizations, including Washington, which welcomes out-of-state entrants, as well as those within so they too can qualify for the National Senior Games. The National Senior Games began in 1987 in St. Louis and had 2,500 entrants the first year. This year 15,000 competitors are expected in the San Francisco area, with the central venue being at Stanford University.

In 2007 a bowler over 100 years old and a cyclist in the 20K race in his 90s competed. Events include archery, badminton, basketball, bowling, cycling, golf, horseshoes, race walking, racquetball, road race, shuffleboard, softball, swimming, table tennis, tennis, track and field, triathlon and volleyball. Complete information about the games can be found at.

As for the kilometer, we all know that it is equal to 0.62 miles and that one mile is 1,609.34 meters. The mile was first used by Roman soldiers as the equivalent of 5,000 feet, which measures 1,480 meters. In the 13th century the mile became its present distance of 5,280 feet and the 1824 British Act confirmed that distance for the homeland and the colonies in America. In 1959 that distance of 1,760 yards became the International Mile.

In the 1960s the Systeme International d'Unites in France, the SI unit, defined the metric system to the standard we know today. Basically, if you drive 10 kilometers, you've gone about six miles. If baseball player Jamie Moyer throws a 60 mile-an-hour change up, on the kilometer radar gun his pitch would be clocked at 100.

Driving 100 (kilometers) in Canada just might be legal, but don't try that in miles per hour on your way to South Bend. A 5K cycle race is a 3.11 mile sprint and the 40K is 24.86 miles, hopefully completed in close to an hour at the National Senior Games.