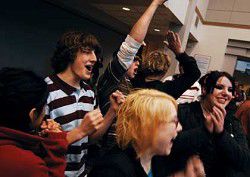 <I>DAMIAN MULINIX Photo</I><BR>The Ilwaco Knowledge Bowl team celebrates as it was announced that they were in first place going into the final round of the district tournament, giving them an automatic bid to the state tournament. 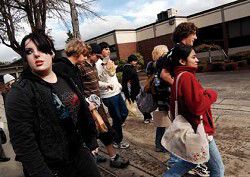 <I>DAMIAN MULINIX Photo</I><BR>Ilwaco senior Alicia Unruh, left, says that it is somewhat of a surprise that her team did so well because, "We never practice. Plus, we're a small school and people don't usually take us seriously, so it means a lot."

<I>DAMIAN MULINIX Photo</I><BR>The Ilwaco Knowledge Bowl team celebrates as it was announced that they were in first place going into the final round of the district tournament, giving them an automatic bid to the state tournament.

<I>DAMIAN MULINIX Photo</I><BR>Ilwaco senior Alicia Unruh, left, says that it is somewhat of a surprise that her team did so well because, "We never practice. Plus, we're a small school and people don't usually take us seriously, so it means a lot."

LONGVIEW - They were cruising. Who did this? Answer. What is that? Answer. With a first-place score heading into the final round of the district Knowledge Bowl tournament last Monday at Lower Columbia College in Longview, Ilwaco High School's team was celebrating a trip to the state tournament. But with a misstep in their team substitutions in an earlier round, it was almost all for not.

The Ilwaco High Knowledge Bowl team advanced to the state tournament after winning a bonus tie-breaking round against the fourth place team in their division, 4-1. This was necessary after it was found that Ilwaco had substituted different players in the second and third rounds, which is against the district tournament rules - a fact that is not so in regular-season play. The mistake could have disqualified them for the day, but since there was no precedence set for this situation it was decided that they would face off against the fourth place team to decide which would make the third and final team advancing to state from their division.

Before the start of that bonus round, team co-captain Fernando Rodriguez looked for some heavenly help.

"That was very intense. I was praying because I really wanted to go to state," he said. "We did good. I'm very happy, excited. Very proud for myself and my team."

The day started out a little less nerve wracking - the first round of the contest is a written exam. Laying on the floor in a circle facing each other amongst all the other teams, Ilwaco answered questions on things like hybernation, rivers in other parts of the world and Thomas Payne.

The following rounds proved more exciting as the competition turned into a game show-style format with three teams of four facing off against each - players buzz in when they think they have the answer. Their first round of this didn't go so well, with Ilwaco coming in third. But there was good news. Following the round they found that they had scored very high on the written portion and were currently in second place in their division.

"Right now we're doing pretty good," said team co-captain Shayla Williams on her way to the next round. "In the last round we only had nine points, which is better than what we were doing earlier in the season."

Perhaps inspired by their performance or standing to that point, Ilwaco went into the next round on fire, scoring 20 points - more than double the output of the next team. It was hard not to feel pretty good going into the announcement of the three finalists from each division.

"The top three teams are, first place Ilwaco ..." said the announcer as the eight Ilwaco students screamed. Making the finals also automatically qualified them for the state tournament, something that Unruh said was a big deal for them.

"We're a small school and people don't usually take us seriously, so it means a lot," she said.

For as high as they were, the Ilwaco team would soon fall back to Earth as they were no match for the other finalist teams. Soon following that round they also found out about the substitution problem and quickly were off to the bonus round.

With only 10 questions standing between them and a trip to state, the Ilwaco players were nervous, some even saying afterward that they were afraid they wouldn't be able to buzz in very well as their hands were shaking.

But with the win in hand, the only thing left to do was to inform their coach, Tom Trudell. But instead of just coming right out with their excitement, they decided instead to play a joke on him and act as though they had lost. As Trudell came towards them and found their faces low and sad expressions, he put a thumb down as if to ask if they had lost.

"This looks like a negative," said Trudell before Bryan Tarabochia told him the good news and the rest of the team razzed him.

"We are going to state," said a satisfied Unruh. "It's a pleasant surpirse."

Loving would be easy if your colors were like my dreams! Happy 60th birthday Boy George

10 summer blockbusters to watch in cinemas

Why these A-listers were BULLIED at school before finding fame