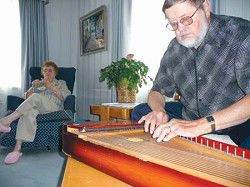 Wilho Saari plays the kantele, the national instrument of Finland, while his wife Kaisa knits in their Naselle, Wash., home. CATE GABLE PHOTO 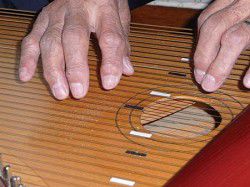 Wilho Saari plays the kantele, the national instrument of Finland, while his wife Kaisa knits in their Naselle, Wash., home. CATE GABLE PHOTO

In the quiet town of Naselle, Wash., on a quiet street, live the quietly content couple of Wilho and Kaisa Saari - but oh, what a life they lead!

"I came to the U.S. to learn English so I could go back to Finland and teach it," says Kaisa, knitting in her rocker in the corner. "But things didn't turn out that way."

"Instead, I ended up teaching Spanish at Naselle High School," she says, laughing.

But that's not the half of it. Wilho and Kaisa ("I call her my roadie," he says) were flown back to Washington, D.C., in 2006 so that Wilho could be honored as a National Heritage Fellowship winner. He and 10 other folk artists were brought to the White House for the award, and he has a letter signed by President George Bush to prove it.

Kaisa and Wilho have traveled the globe with the kantele (pronounced CANT-a-leh), Finland's national instrument and a relative of the zither. They estimate there may be only a couple hundred kantele players in the U.S.; Wilho is a master and largely responsible for the kantele revival.

The call of the kantele

The kantele looks similar to an autoharp, either played on the lap or on a table in front of the strummer. One plucks the instrument with fingertips, most often playing melodies with one hand and chording with the other.

Although Wilho is the fifth generation of his family to play the kantele, he did not seriously take up the instrument until he was 50.

"I listened to my father play the kantele every night after work, and my two uncles also played. But in school I always played brass instruments in the band - trumpet, baritone - and the organ and piano," he said. "The kantele was Dad's thing."

"Uncle Matt (Matti Fritioff Leppäsaari) was a gentle kantele player," he said, illustrating by playing a soft lilting melody by tenderly plucking the long strings of the kantele on the low table in front of him. "But my father played - (he looks over at Kaisa) - well, more of a march style." He begins a band tune with louder, brisker rhythmic plucking.

"My dad passed away in 1968 and I inherited his kantele. It always hung on our wall. One day in 1982, I was home and Kaisa was at work, and I took down the kantele and just decided to try it out - I knew how it was played - I fell in love with it from day one."

Since then, Wilho has become one of the best kantele players in the world and has composed more than 2,300 songs for his instrument of choice.

Wilho's great great grandmother, Kreeta (Järvilä) Haapasalo, was a famous kantele player in Finland who supported her 11 children by playing for the public throughout Finland and Russia.

Her playing is documented in poems and songs of the times - she was born in 1813 - and she has been honored by two statues in Kaustby and Vetil, Finland; she and her music are also commemorated on a Finnish postage stamp.

One of Kreeta's patrons was poet Zacharias Topelius. He encouraged her to perform her music and even suggested she take the surname Haapasalo, after the house she was living in, when she told him she had no surname.

By a strange and propitious twist of fate, two centuries after Topelius' death, Astoria's North Coast Chorale director Denise Reed-Hines plucked a Topelius poem from the library and set it to a tune composed by Wilho, not knowing the connection.

But Kaisa and Wilho are used to these amazing synergies.

They were married after a whirlwind romance by correspondence.

"When his first letter arrived, I just knew," Kaisa said, adding another several rows to her knitting project.

Then later in their lives, several decisions were settled in one fell swoop by another mail delivery. "I received a 4F letter from the military and a note from our pastor asking if we wanted to go to Liberia as teaching missionaries," said Wilho. "That settled it."

Their lives have been kissed by kismet. "In 1986, we went to Finland and I went to the place where they make kanteles," said Wilho, " and I bought this one made by Jussi Ala-kuha."

Wilho plays a beautiful red-toned 36-stringed kantele with a damping board. "Later, I was so pleased with it that I called Jussi up and ask him to make me two more. In about three months they came in the mail - one package, two kanteles."

"Five months later Jussi died, and he wasn't that old. Those were the last kanteles he made."

For seven years, Wilho and Kaisa drove to Portland every month to teach the kantele to a small group of musicians called Livakat. He also began composing tunes for the kantele in Mel Bay spiral notebooks, one song a page. He uses Roman numerals to keep track of his notebooks and tunes; his notebooks are numbering in the mid-40s.

Hot off the press is his newly-published "Wilho Saari Tune-a-Day Compositions," edited by Arja Kastinen. Many of the tunes can be played with other stringed instruments, guitar or ukulele; but even more fun are the notes that accompany many of the songs: XLI-19, "Tax papers done! Amen!" or XLI-87 "Uncle Paul in Walla Walla Hospital," or XLI-141 "Thanksgiving - all 12 present!"

It's the record of a life well lived.

How much every state spends on public health

Watch the Terminator get his Covid-19 vaccine