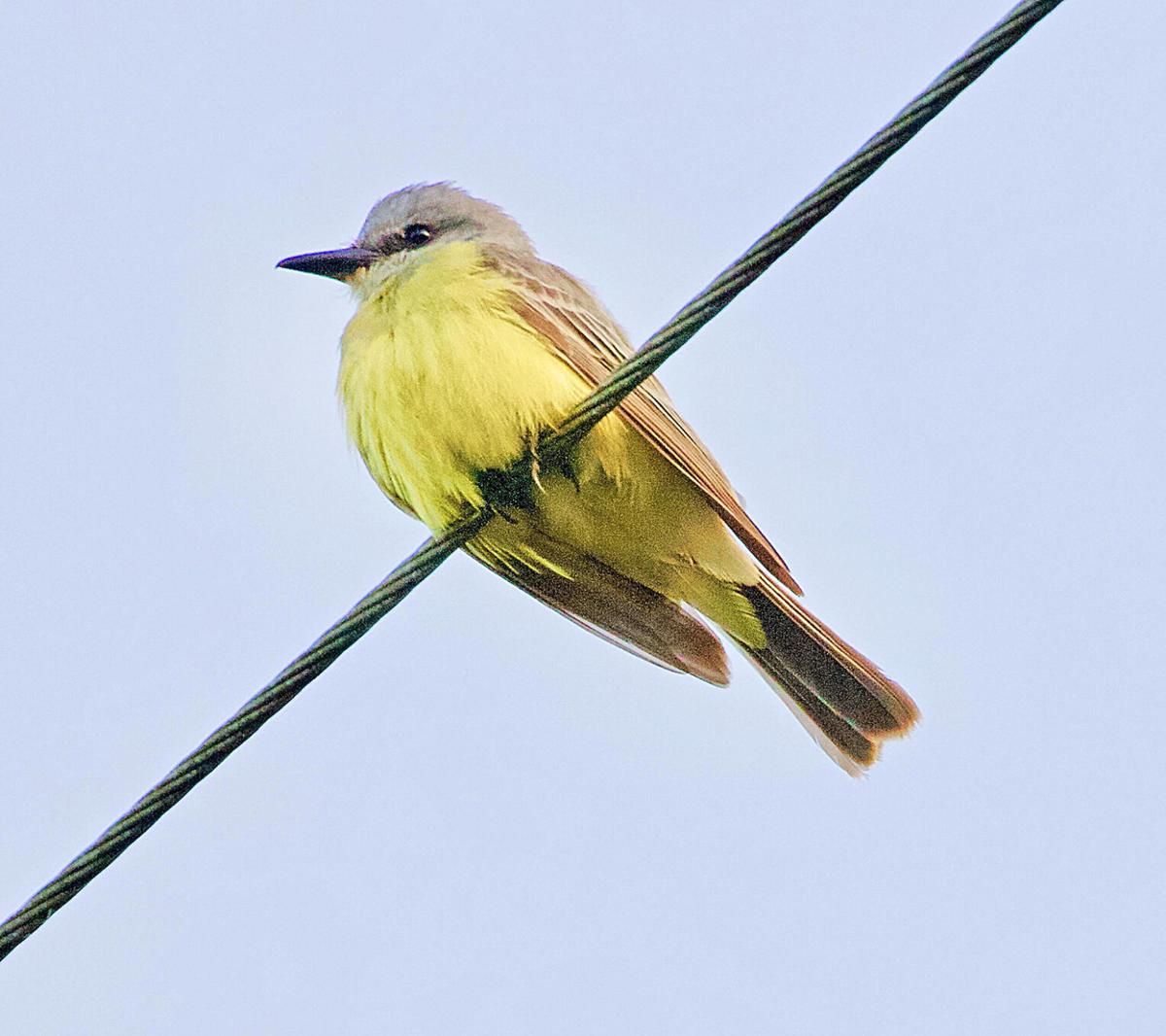 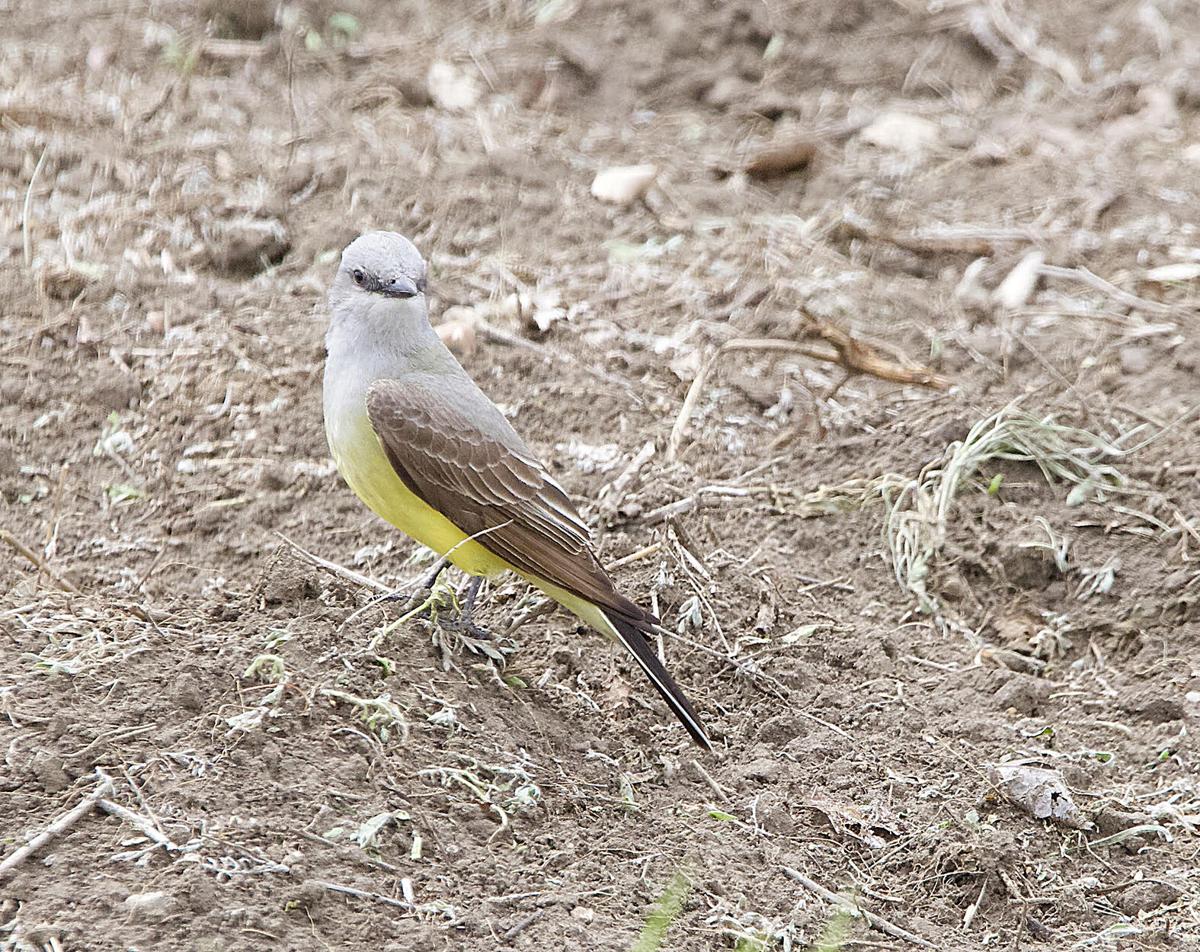 Kingbirds typically fly off their perch to snag an insect for lunch. This western kingbird was sitting on the tree branch, but flew off and landed in an open field. It has just finished an insect it spied flying up from the ground. 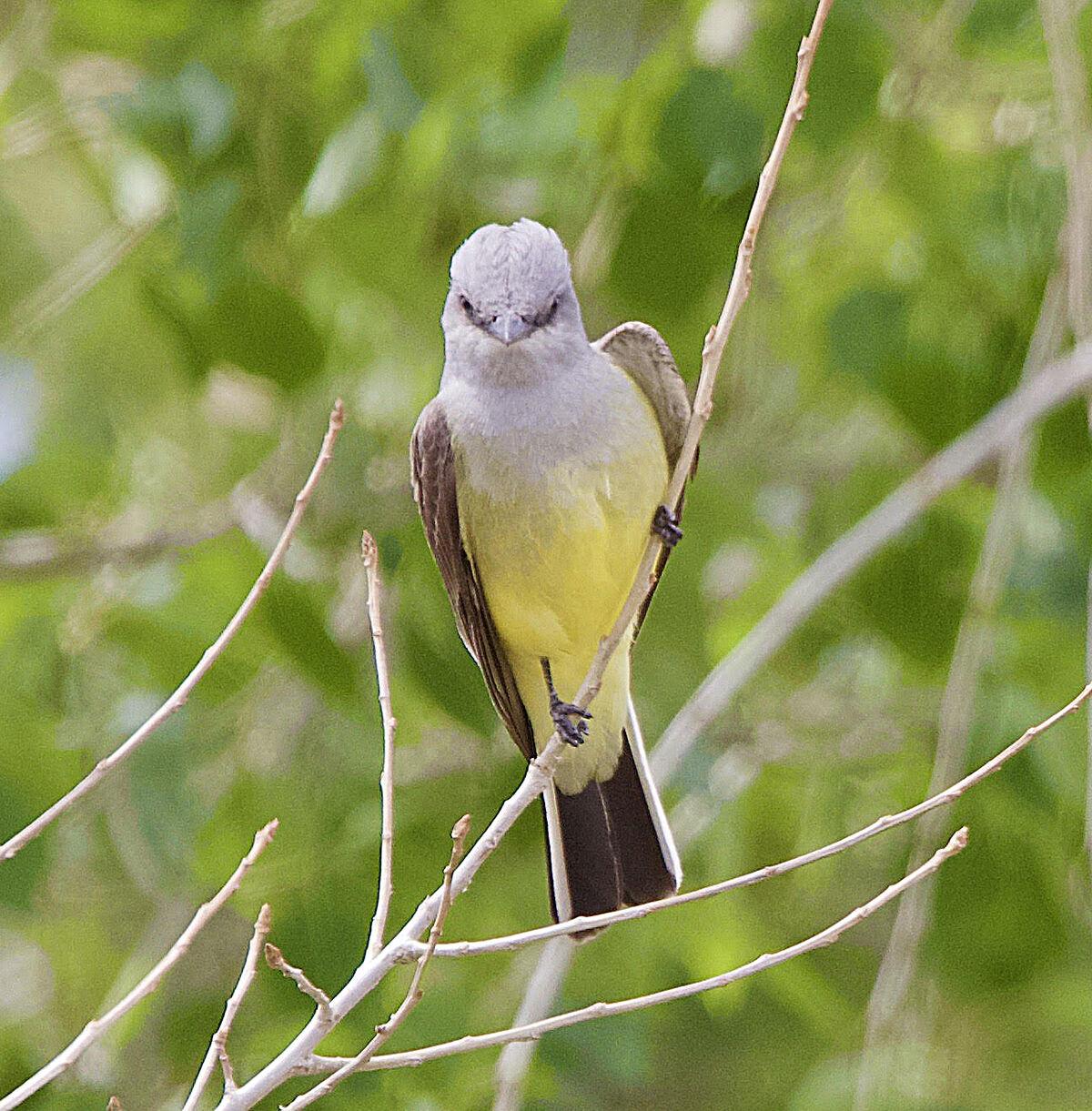 Kingbirds typically fly off their perch to snag an insect for lunch. This western kingbird was sitting on the tree branch, but flew off and landed in an open field. It has just finished an insect it spied flying up from the ground.

A large yellow-bellied flycatcher with a rather large bill, yellow breast and greenish back has been visiting the Ilwaco area since the last week in October. As of Nov. 16, the tropical kingbird was still being seen in Ilwaco. Some birders reported seeing three or four of them all at once.

The Cornell Laboratory of Ornithology indicates that tropical kingbirds’ preferred habitats are open areas with some trees and water, but it also indicates that it enjoys parks and neighborhoods. Ilwaco fits the bill in all respects, so it is not surprising that it has been seen for a while now and that it stayed around. It has been reported near the baseball field and in various trees in the neighborhood near the park.

The first ever sighting of this rarity on the Peninsula is thought to have been in the fall of 2015. That year it was seen on the Chinook Valley Road and in Tarlatt of the South Bay Unit of the Willapa National Wildlife Refuge. The next reported sighting, as far as I know, was in the late fall of 2019. Then, it was sighted here on Sandridge Road and also on Wireless Road in Astoria.

Now it’s 2020 and the tropical kingbird has again returned to the Peninsula.

The tropical kingbird is very similar to the western kingbird, which is designated as rare from spring through to autumn on the refuge. However, the tropical kingbird is much larger, has a larger bill and a brighter yellow breast and belly, and a greener back. The handsome tropical kingbird can be seen in trees, on fence posts and on utility wires. Like most flycatchers, insects are its favorite meal. It mainly feasts on larger insects. In typical flycatcher fashion, it snags its meal by flying off its perch to snatch an insect on the wing. It then returns to the same perch to consume the tasty goodie it caught.

The tropical kingbird is still considered relatively rare in Pacific county and on the Long Beach Peninsula where it is designated on the field checklist as an accidental. The explanation for this designation is based on the fact that it has only been recorded five times or less. This is certainly true for the Peninsula.

The Smithsonian Field guide indicates that the tropical kingbird is expanding its range in North America and is increasingly being detected as a vagrant far out of its range. It goes on to say that it is not as unexpected as one might think on the West coast during the fall months.

This is supported by Cornell lab records that indicate the tropical kingbird has become a regular fall visitor to the Pacific coast of the United States. Cornell’s mapping of the bird’s occurrence between 2015 and 2020 indicates that nearly every year a few of them are found on the coast.

It might not be long before the designation for the tropical kingbird on our local field checklist changes to common or uncommon in the fall if it continues to visit our area annually. Time will tell!