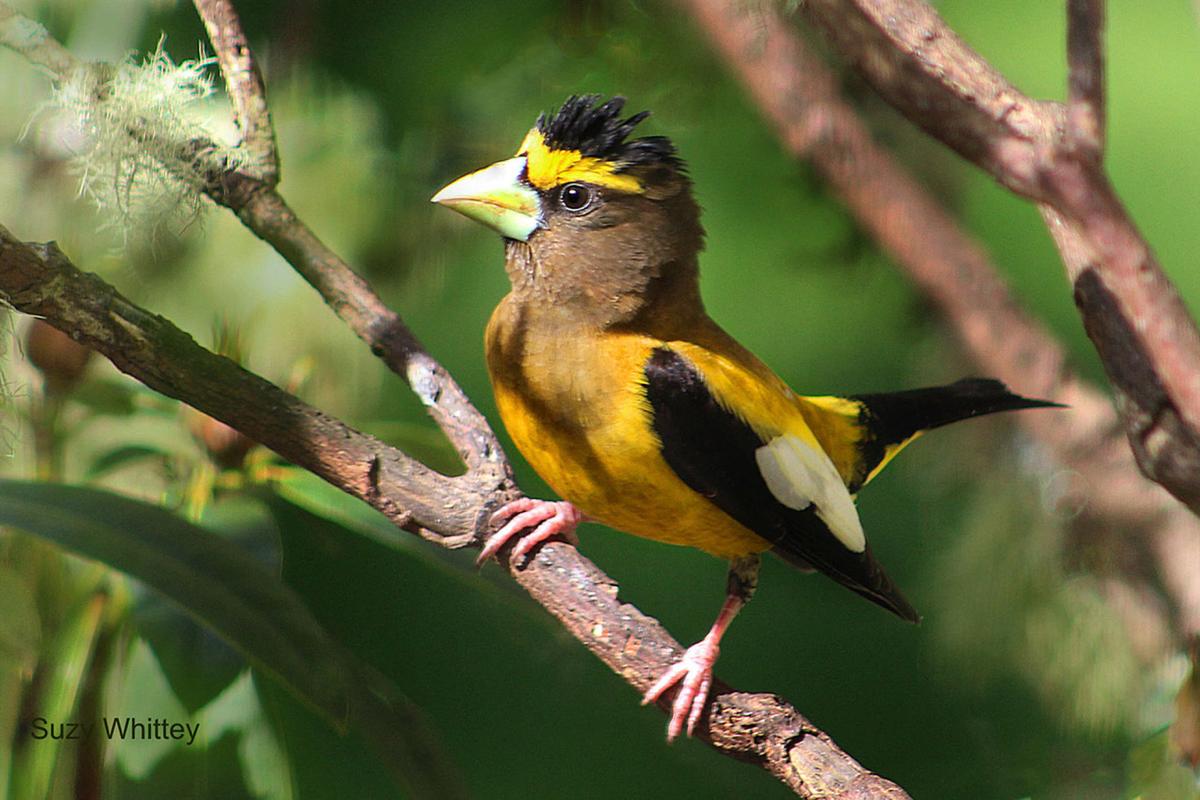 Evening grosbeaks are a colorful species that may be expanding their territory into the Willapa Bay/South Pacific County area. 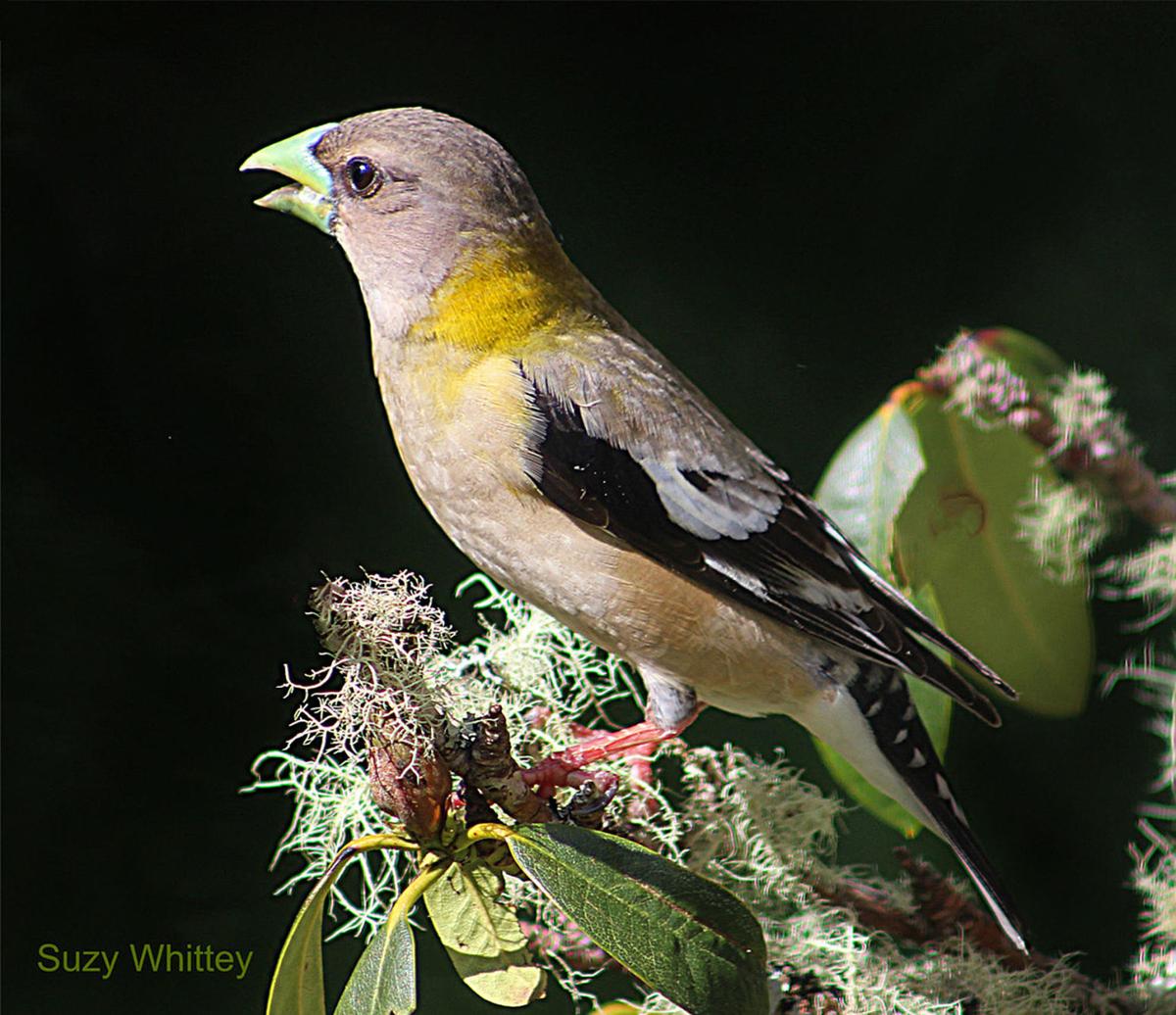 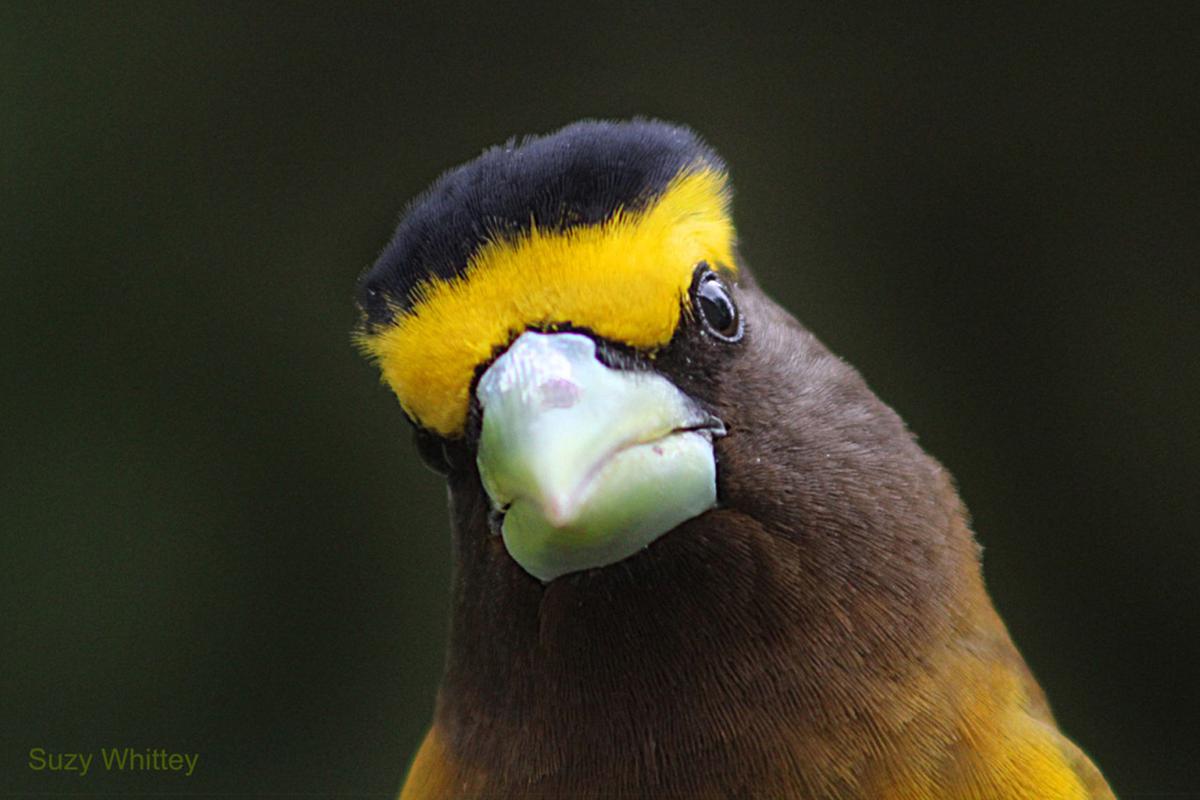 A male evening grosbeak gave a photographer a quizzical look.

Evening grosbeaks are a colorful species that may be expanding their territory into the Willapa Bay/South Pacific County area.

A male evening grosbeak gave a photographer a quizzical look.

The new kid on the block is heavy set and yellow bodied. The male has a large, dark head, a huge conical bill and a yellow eye stripe that makes for a fierce looking bird. This bird, the evening grosbeak has been seen in our area on occasion since 2014. I first came across it in Naselle. This species of grosbeak was first reported to eBird in 2014. To date, it has been observed in Seaview, Ocean Park, Cape D and the North Head. This year, it is being seen in Seaview and in Long Beach.

The female evening grosbeak, like the male, has a huge head and bill. Her bill is paler in color than the male’s. According to Sibley, she also has large more complex white wing markings. Overall she is a soft gray color with golden highlights and a greenish tint to the back of her neck. The very large beak gives this bird its name, but in reality it belongs to the finch family and allies.

Scientific research indicates that the evening grosbeak is monogamous. Their courtship is quiet without elaborate display behavior in their efforts to attract a mate.

Evening grosbeaks are social birds so they are often seen in flocks. They prefer insect larvae in the summer, but will eat seeds, buds, berries and small fruits most of which become their staples in winter. These birds will frequent feeders, and in fact, this is where they are being seen now in our area. These grosbeaks are typically seen sitting atop trees and shrubs when feeding. However, if tasty goodies are found on the ground they will also ground feed. Their seed diet is quite varied and includes maple, cherry, ash and boxelder. Their most favored food is the larvae of the spruce budworm, which is excellent because the budworm is a devastating forest pest.

The evening grosbeak is well suited to what it eats. Its powerful beak is capable of not only crushing the cherry pit, but is also capable of removing the flesh from a cherry so it can get to the pit. As you can imagine with a beak this size and strength it eats larger seeds than most other species. They provide a service to the smaller birds such as pine siskins which are often seen with them. They are there to get the food scraps that the grosbeaks leave behind.

The evening grosbeak is considered to be an irruptive species which means that once every two to 10 years a “dramatic, irregular migration of large numbers of birds to areas where they aren’t typically found may occur (The Spruce). If only a few birds appear during this cycle the birds are considered to be vagrants. Irruptions happen due to such things as lack of food in the normal wintering grounds, poor seed crops, famine, and harsh or cold weather. All of these things can “force” large numbers of birds to seek better habitats for food, sustenance, and warmer wintering grounds (the spruce). It would appear then, that the birds being seen in our area might be vagrants. Various up-to-date distribution maps reveal that the Evening Grosbeak is indeed in our area, and is common but irregular.

Only time will tell whether the evening grosbeak becomes a regular on the Willapa National Wildlife Refuge and the Peninsula. Perhaps it will always be a “new kid on the block” every two to 10 years! Again, time will tell!