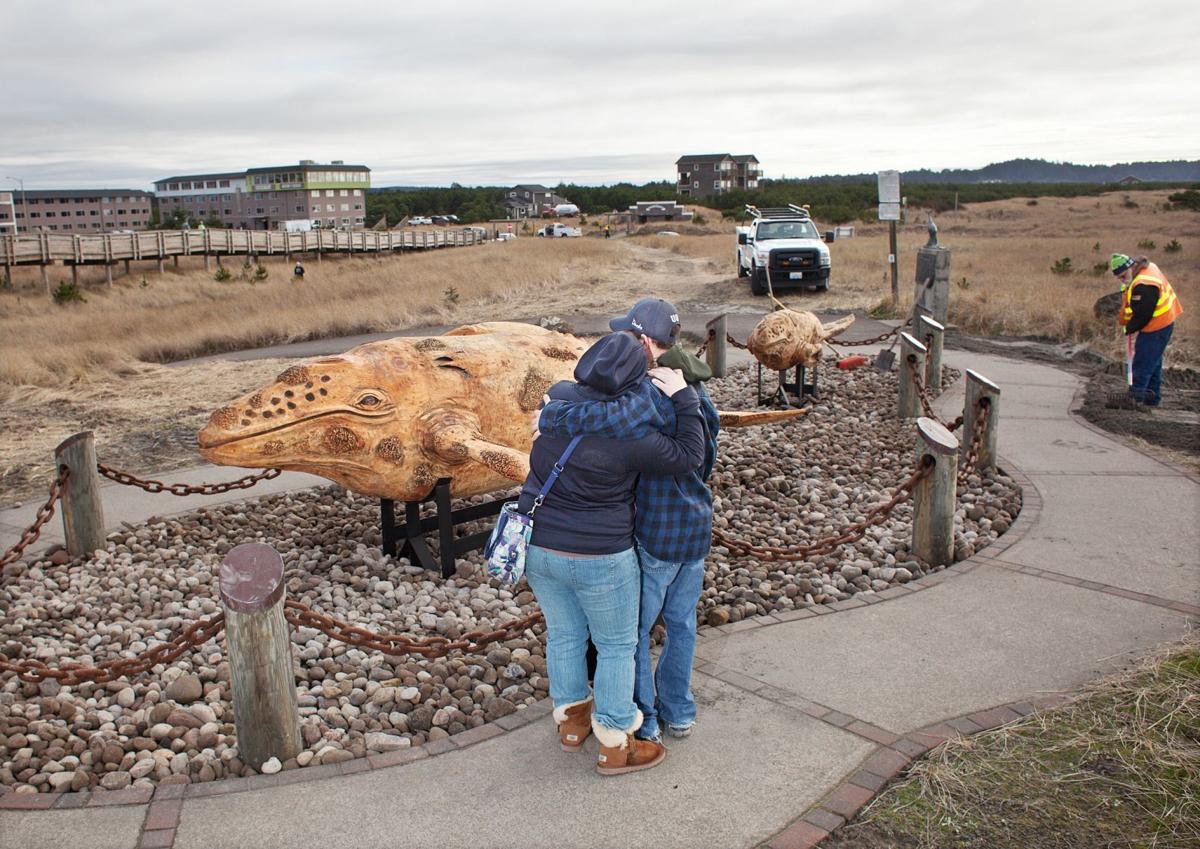 The newly installed gray whale wood carving will undoubtedly be a draw for anyone visiting the Discovery Trail for the first time. 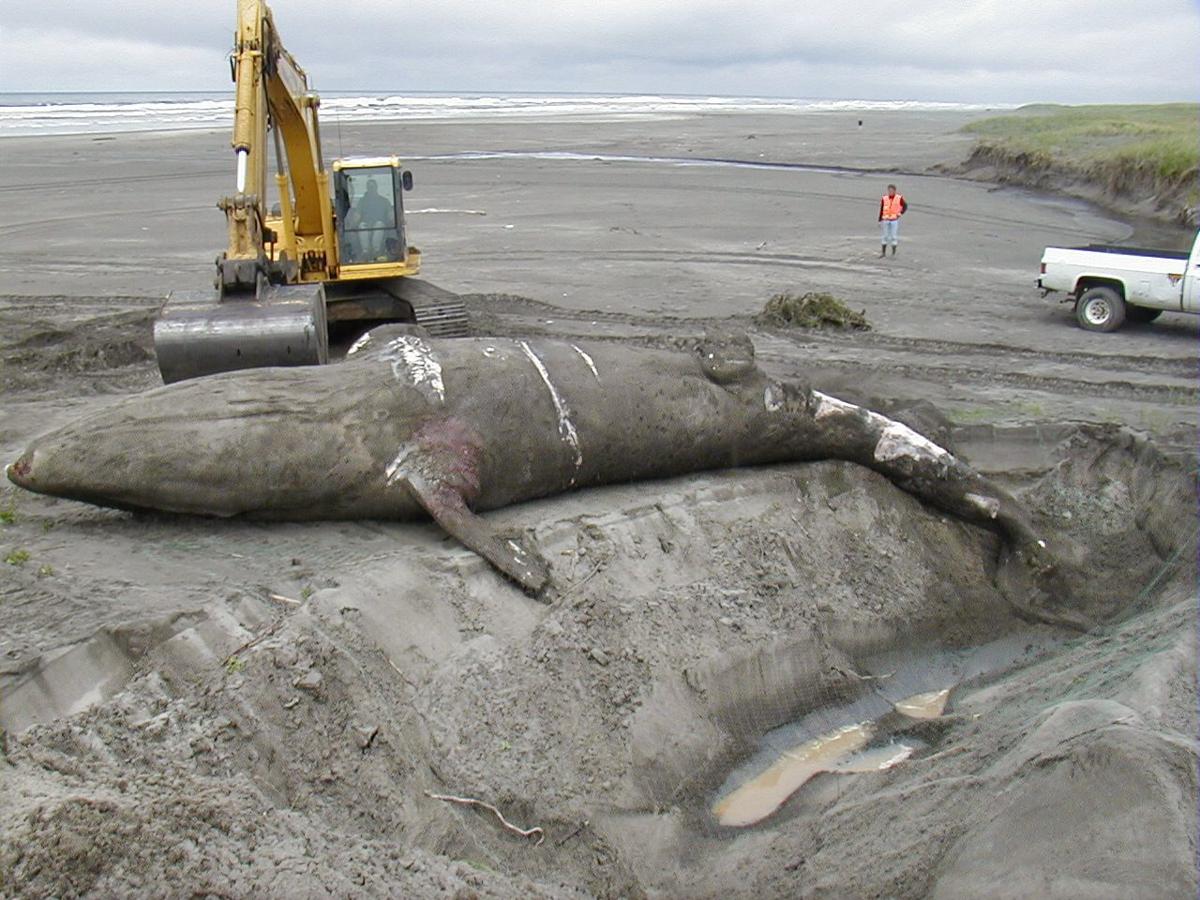 In May 2000 the city of Long Beach buried a juvenile gray whale that had washed up dead on shore. 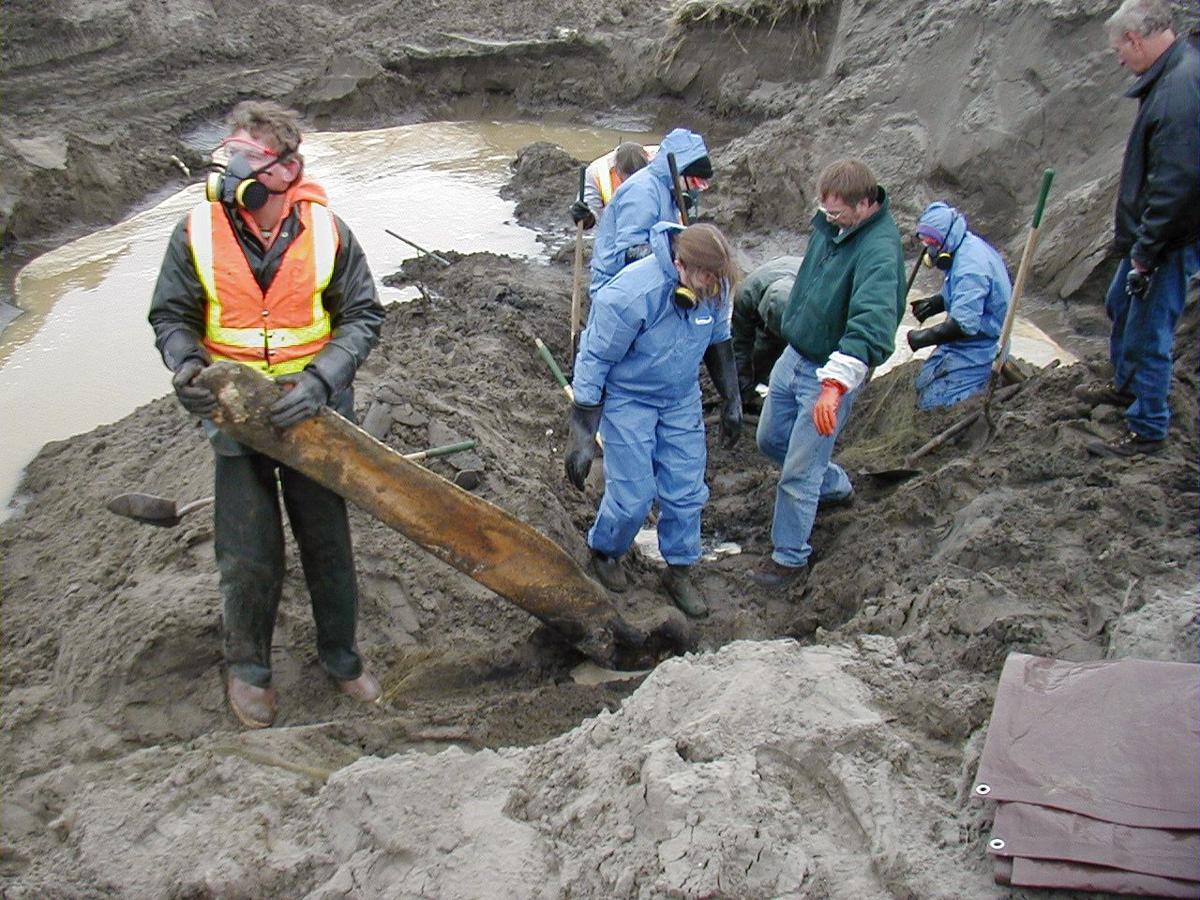 In early 2002 the city of Long Beach exhumed the whale carcass, which had only partly decayed at that point, in order to harvest the bones. 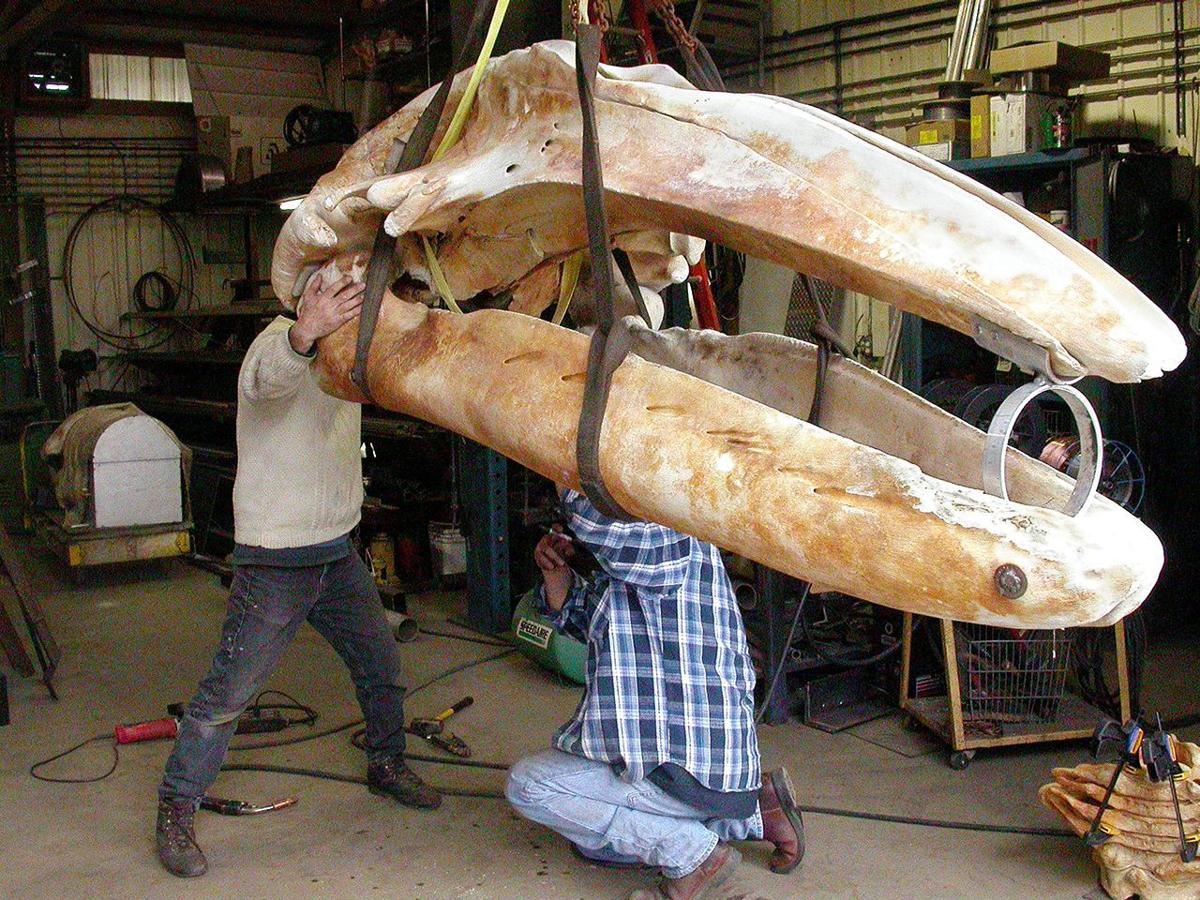 After stripping the remaining flesh from the bones, the skeleton was then articulated for display along the Discovery Trail. 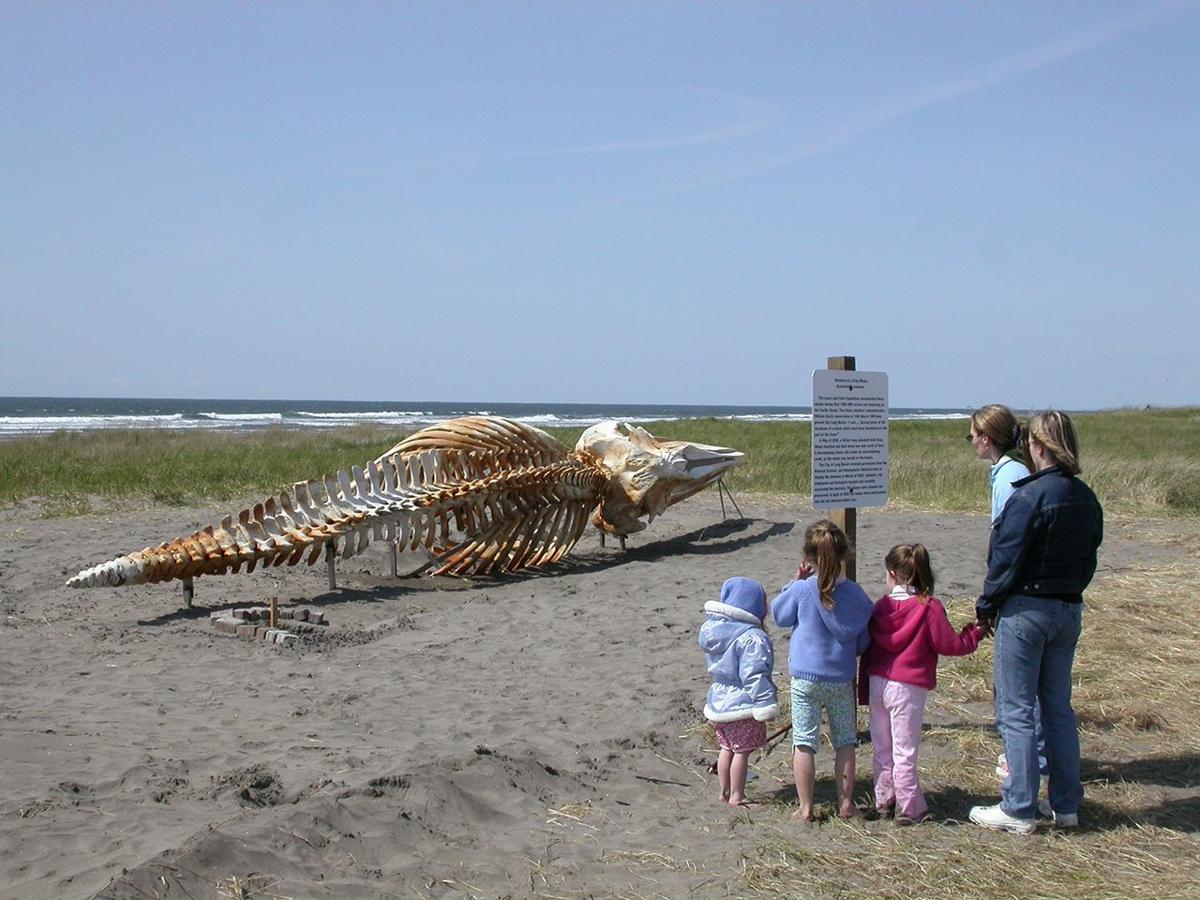 In May 2003 the completed skeleton statue was installed near the Sid Snyder beach approach in Long Beach. 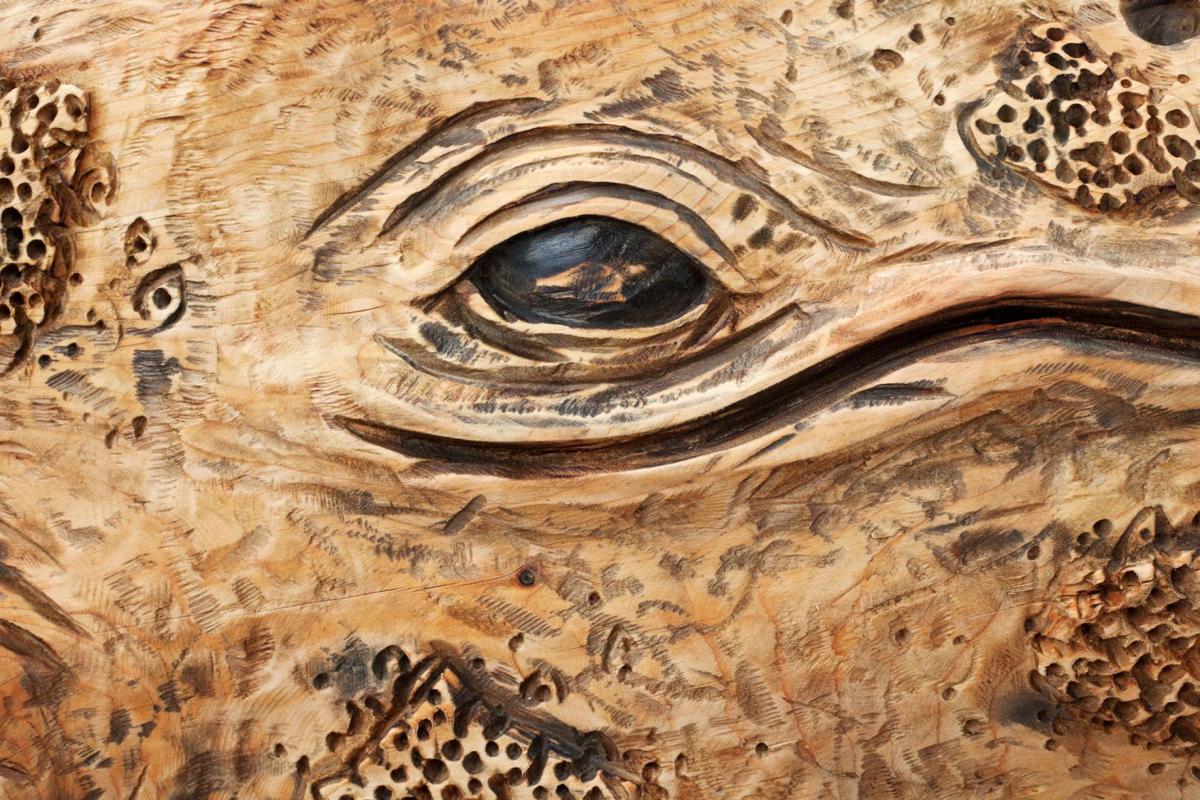 The new whale statue was carved by artist Josh Blewett, who has various carvings on display around the Peninsula. 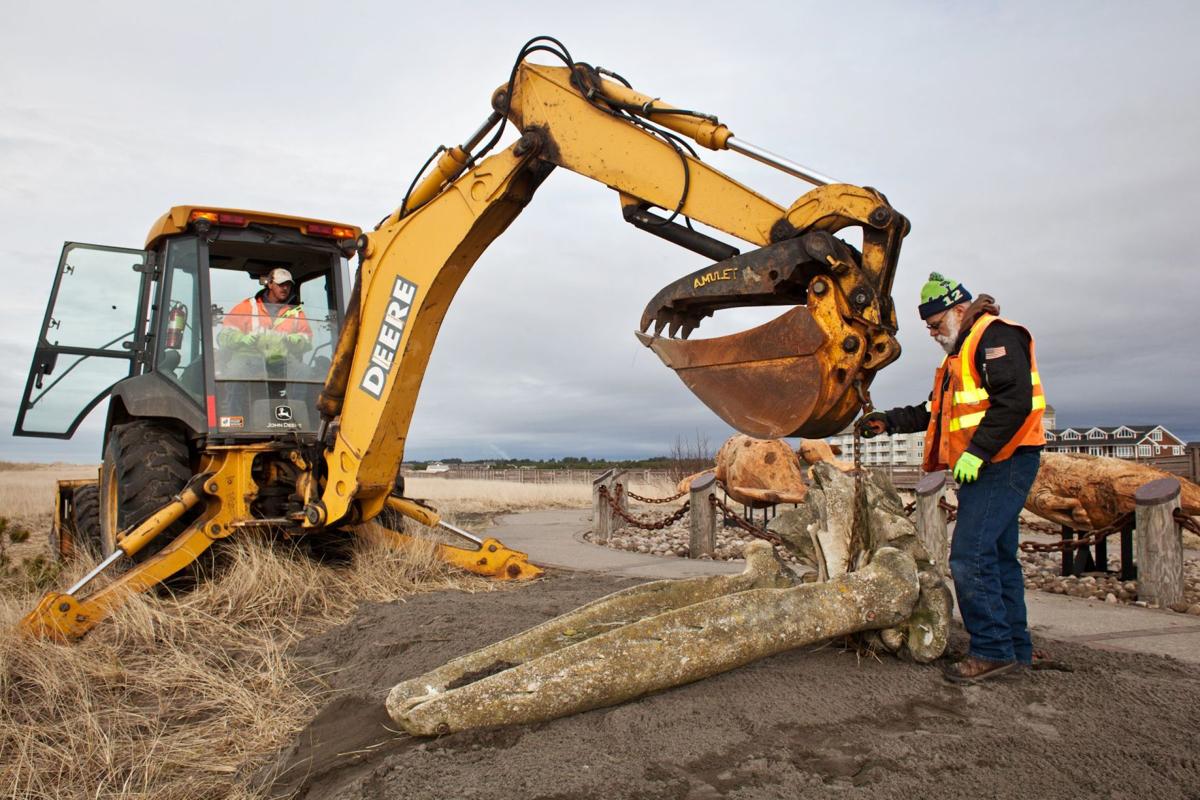 The newly installed gray whale wood carving will undoubtedly be a draw for anyone visiting the Discovery Trail for the first time.

In May 2000 the city of Long Beach buried a juvenile gray whale that had washed up dead on shore.

In early 2002 the city of Long Beach exhumed the whale carcass, which had only partly decayed at that point, in order to harvest the bones.

After stripping the remaining flesh from the bones, the skeleton was then articulated for display along the Discovery Trail.

In May 2003 the completed skeleton statue was installed near the Sid Snyder beach approach in Long Beach.

The new whale statue was carved by artist Josh Blewett, who has various carvings on display around the Peninsula.

LONG BEACH — On Nov. 18, 1805, Captains Meriwether Lewis and William Clark happened upon a whale carcass while exploring the area near Cape Disappointment. Though it was certainly one of their first and only encounters with an animal of that size, it was the California condor that feasted on the carrion that captured their fancy — one of the party shot it, and Clark meticulously recorded its dimensions in his diary.

Nonetheless, the explorers’ fleeting mention of the animal has provided the impetus for two ambitious public art projects along the Lewis and Clark Discovery trail.

This month, Long Beach staff installed a new pod of carved wooden whales on a bluff near the Bolstad beach approach. The cedar sculptures, carved by Seaside artist Joshua Blewett, replace a whale skeleton that had been on display since 2004.

While both projects were ultimately successful, the creators quickly discovered whale-sized art projects come with equally enormous complications. Years before Blewett struggled to transform a massive cedar log into a family of whales, city staff and volunteers struggled with the 38-foot-long body of an actual decomposing whale. Fifteen years after it all began, the people who worked together to turn that carcass into a piece of public art still can’t tell the story without falling into fits of laughter, or shuddering at the smell.

When the body of a young, male gray whale washed up in Long Beach in May 2000, city leaders thought that the skeleton would make an interesting tribute to the area’s natural heritage. But first, they had to figure out to get the meat off of an animal that weighed somewhere between 15 and 25 tons.

But they couldn’t just leave it to stink up the beach, so the city crew dug a deep hole near North 12th Street. Using a bulldozer, the rolled the carcass on the fishnet they’d spread over the bottom of the hole and covered it up.

But by early 2003, excitement over the 2005 Lewis and Clark Bicentennial was growing and community leaders were thinking about how to evoke the sense of wonder the explorers felt during time on the north coast.

They wanted public art that showcased the abundant wildlife of the era. They wanted the whale.

“We knew we had this whale that had been buried on beach for a year, but no one knew what kind of condition it was in. We got to talking about it and we thought, ‘Well, we’ll just dig it up and see what’s there!’” recalled Jim Sayce, a local historian who served as the city’s community development director at the time. After getting permission from NOAA (whales are a protected species), the city staff in spring 2003 made plans to exhume the whale.

On the day of the big event, a crew of city workers and volunteers assembled inside a temporary plastic tent. They suited up in plastic rain suits, gloves, hoods and gas masks, then taped their plastic pants to their rubber boots.

No one was quite sure what to expect when they unearthed the whale, but two things immediately became apparent: First, a surprising amount of the flesh had dissolved, and second, as Sayce puts it, “It stunk to high freaking hell.”

“There was literally no flesh left — I mean, none! It was insanity. We couldn’t believe it. That’s not to say there wasn’t a little blubber left. It was really greasy,” Sayce said.

Sea creatures don’t really have to contend with gravity, so a whale’s skeleton is surprisingly delicate. Most of its mass is flesh, vast deposits of blubber, and oil. Over time, the fat had soaked into the sand, creating an oozing black muck that let off an ungodly stench.

The workers had to wade into a “big, gooey blubbery mess,” Glasson remembered. “They were literally knee-deep in guts!”

“The sand had this weird, oily sticky-no-matter-what consistency like axle grease,” Sayce said. He spent that day taking photos, but Mike Kitzman the city’s parks, streets and drainage director, was among those who went into the belly of the whale. “I’ll tell ya, it was the nastiest smelling thing ever!” Kitsman remembered. “We had respirators, we had Vicks on our noses.”

According to Sayce, the stench persisted for weeks after the sand had been filled back in. Many of the crew members had put on brand-new rain gear for the exhumation, but the odor proved so persistent that they had to throw it all away.

Whale bones are impregnated with oil, which gives them a powerful odor and waxy texture. At first, no one was quite sure how to get rid of it. But in short order, the effort to turn the putrid carcass into art became a community project.

Long Beach Mayor Dale Jacobsen (who is now the mayor of Cathlamet) “came up with this weird recipe to de-flesh the bones,” Sayce said, and then someone suggested asking Albert Shepherd of the Friday Harbor Whale Museum for guidance.

The carcass went into a plastic-lined dumpster filled with water, peroxide and a submersible heating element, where it stewed for about a week.

“I gotta tell you the crew was very noble about it,” Sayce said. “This thing hung out by the shop for weeks and the smell didn’t leave. We talked about, ‘God help you if any got in your truck.’”

“It was one to remember. I hope we never to do that again,” Kitzman said.

When the bones emerged, clean and beautifully white, Sayce drove them home in the back of his truck and drilled a hole in each vertebrae so the skeleton could be articulated. In Nahcotta, welder Bob Girard created a steel frame and then the whale was shipped to Friday Harbor for assembly. A grant from the Templin Foundation paid for the project, which cost around $25,000.

The completed skeleton had a “surreal,” other-worldly appearance, Sayce said. “It was absolutely beautiful.”

Sadly, the years were not kind to the whale.

The city knew the skeleton might only last 20 years, because the cleaning process had eroded the bones’ protective enamel coating. But “None of us expected the vandalism,” Sayce said.

“People pull parts off of it and take them home and put them in their garden,” Borchard, the city planner, said. “People have parted it out. It’s just dreadful what they’ve done to it.”

By 2013, it had been reduced to a pile of discolored and moldering bones, so city decided to replace it.

They hired Blewett, a professional wood-sculptor who was raised on the Peninsula.

Originally, the idea was to re-create the skeleton bone-by-bone. Blewett, who started out making chainsaw carvings of Pacific Northwest animals, has gravitated toward more complex and abstract forms, so he was excited to take on the challenge. It didn’t take long to realize that the replica would be difficult to make, and nearly impossible to maintain.

“It seemed like it was one thing after another,” Blewett explained. A load of antique cedar, salvaged from a forest fire proved to be too rotten to carve, and then one after another, the curved rib bones split, leading Blewett to realize he needed a new plan.

He decided to carve a pod of whales instead, and began searching for a piece of wood large enough to carve three animals.

At 14 feet long and more than four feet across, that log was so heavy his tractor could barely moved it. Every time he wanted to turn the sculpture, he had to use his truck to roll it. He worried that he wouldn’t be able to get the shape right. He worried that he’d accidentally lop something off, and have to start from scratch.

As he sanded the final product, he realized it didn’t look realistic because real whales don’t have smooth skin. He went back over the surface with his chainsaw, adding scars, scuff marks and barnacles. Finally, the whale was done.

Now, the pod of whales swims above a bed of river rock, on the site where the skeleton used to be. Kitzman said they’ve fortified the fins, and taken pains to make sure the baby whale is securely fastened to the mother. He thinks the sculpture is sturdier, and at a cost of about $4,000, was “a really good deal.”

“In my opinion it looks really cool,” Kitzman said.

Despite all of the complications, Blewett is delighted with the final product.

“Everything came together in the very end and it looks just like how I wanted it to look,” Blewett said.