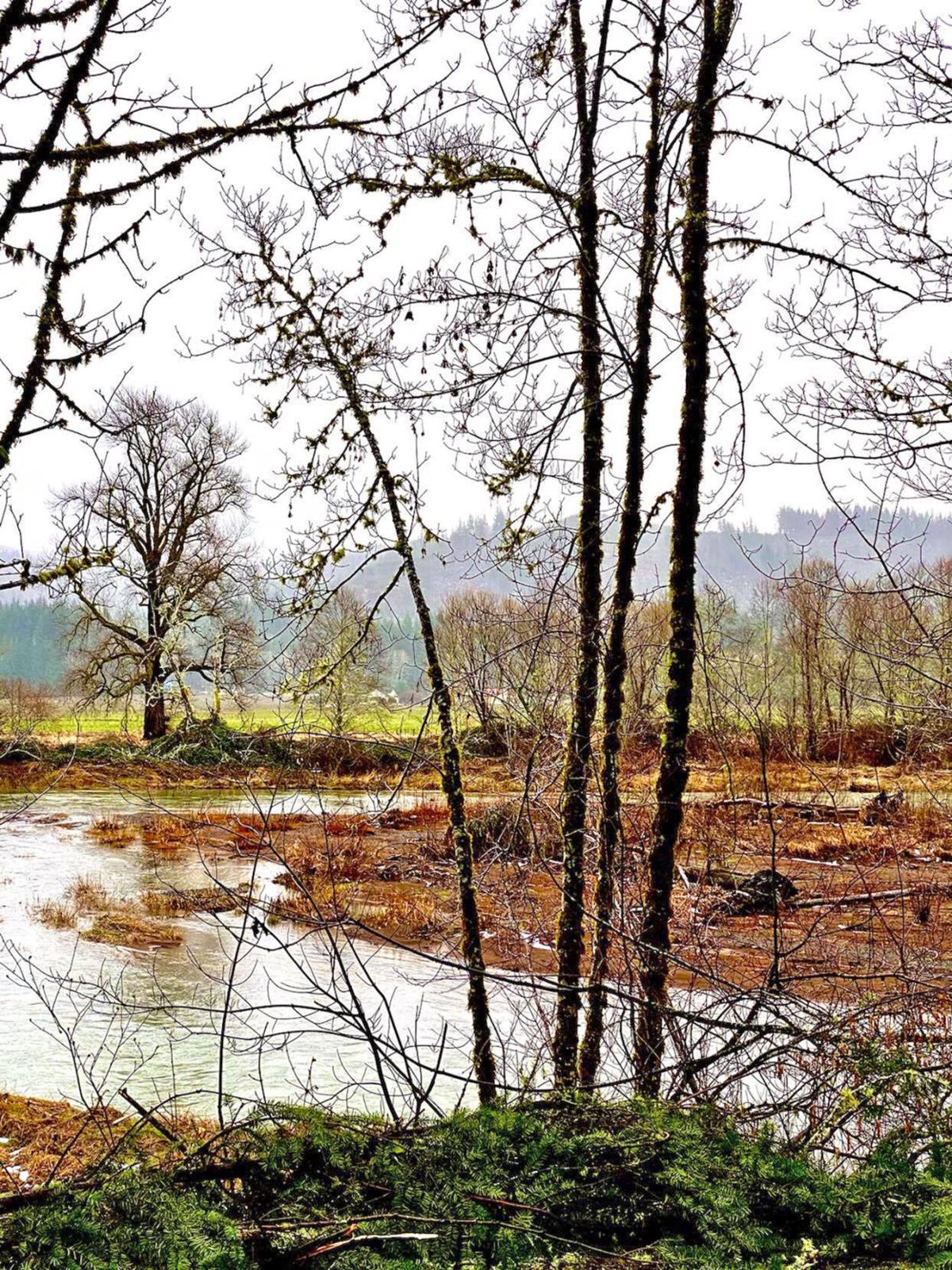 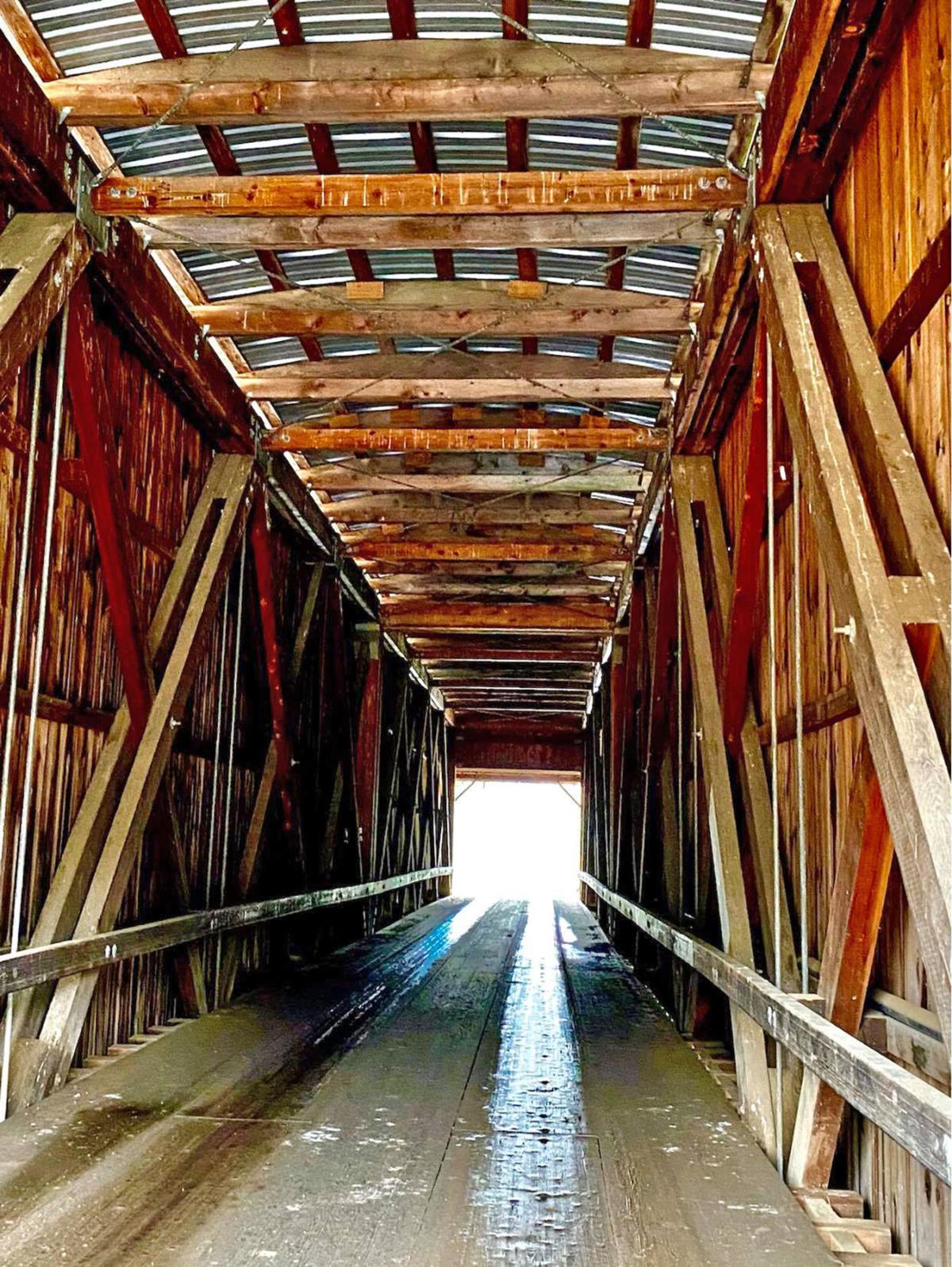 The carefully framed interior of the Grays River Covered Bridge serves as a home to birds and hosts a popular annual fundraising dinner. 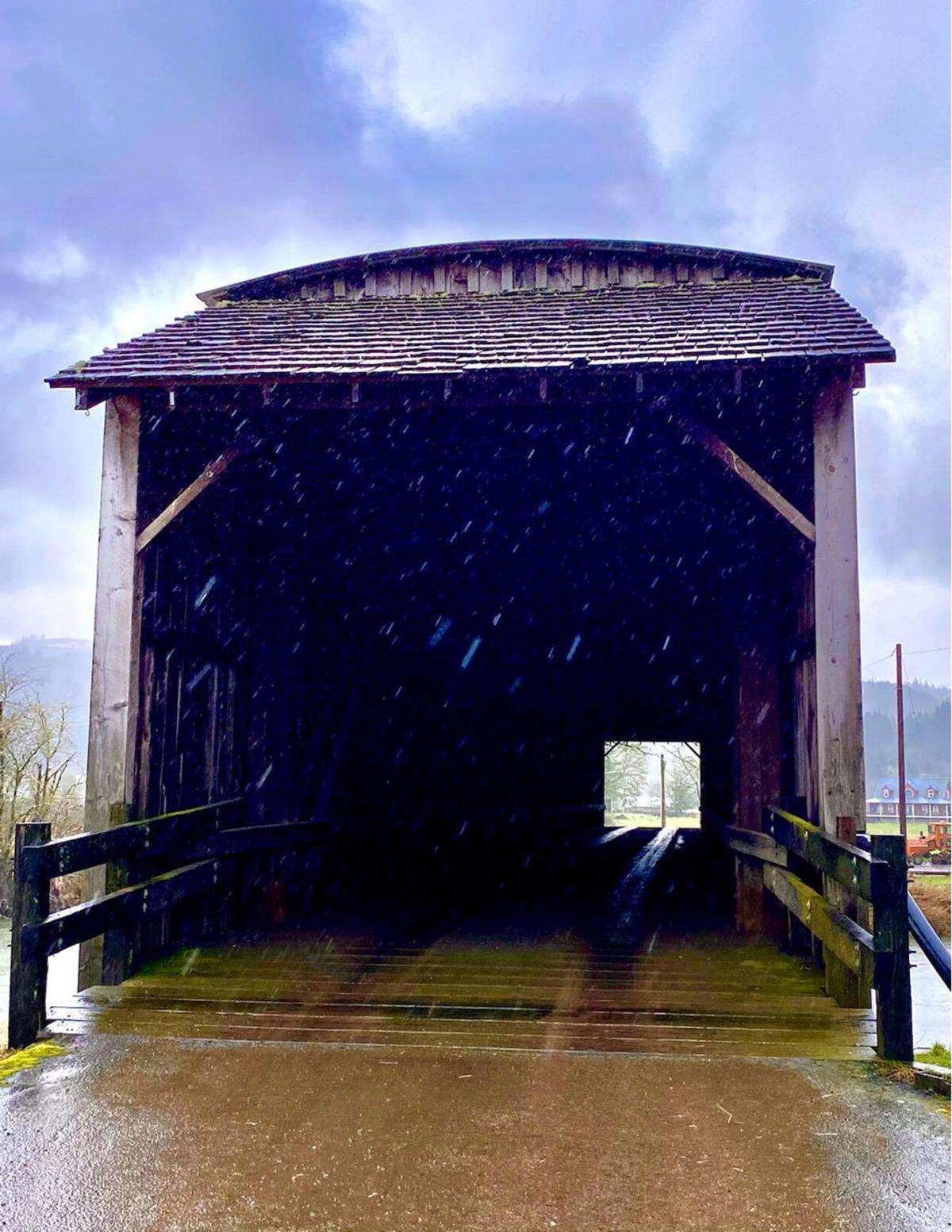 The light at the end of the covered bridge opens out onto the lush farmland of Western Wahkiakum County. 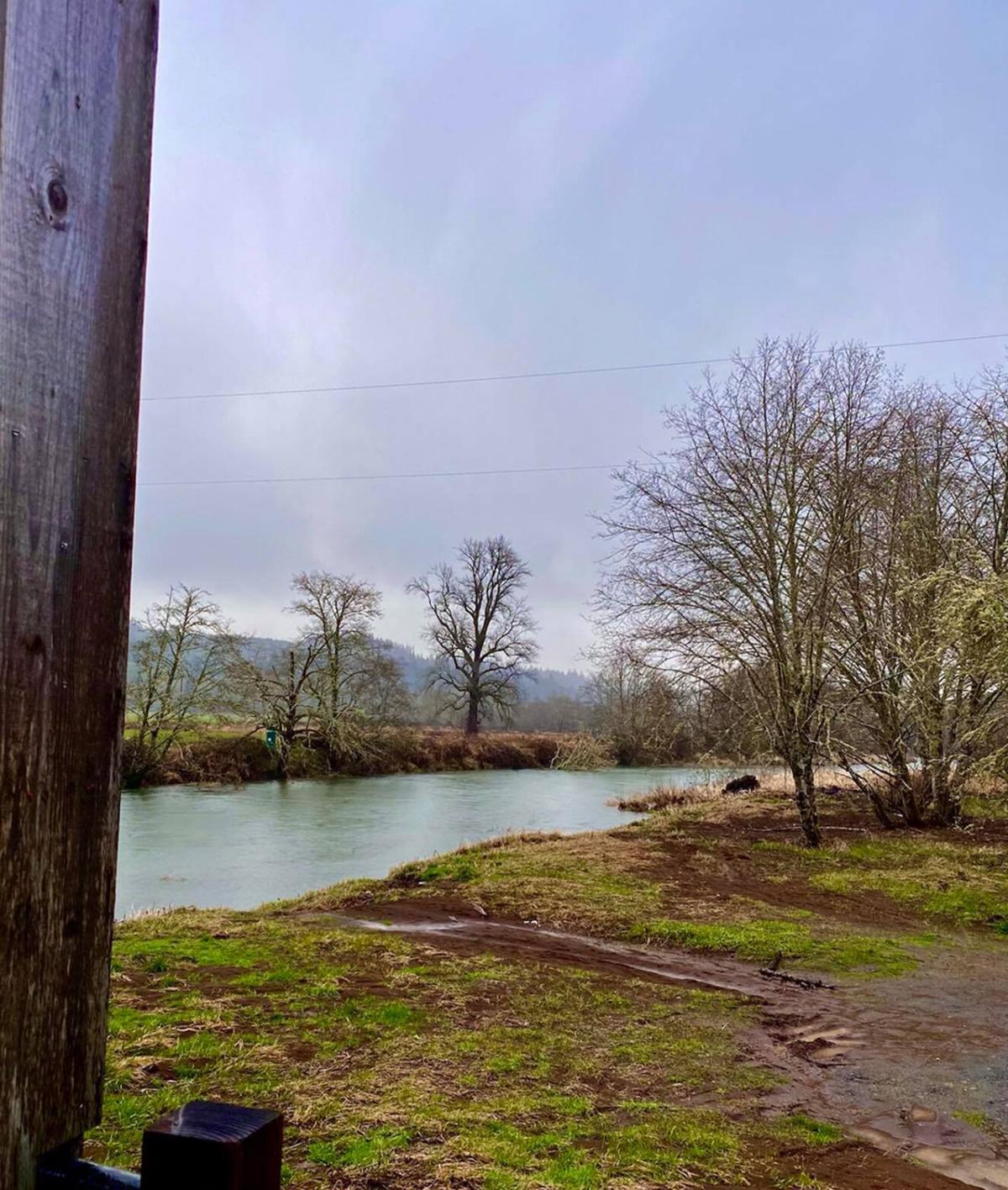 An earthen ramp offers access to Grays River near the covered bridge. 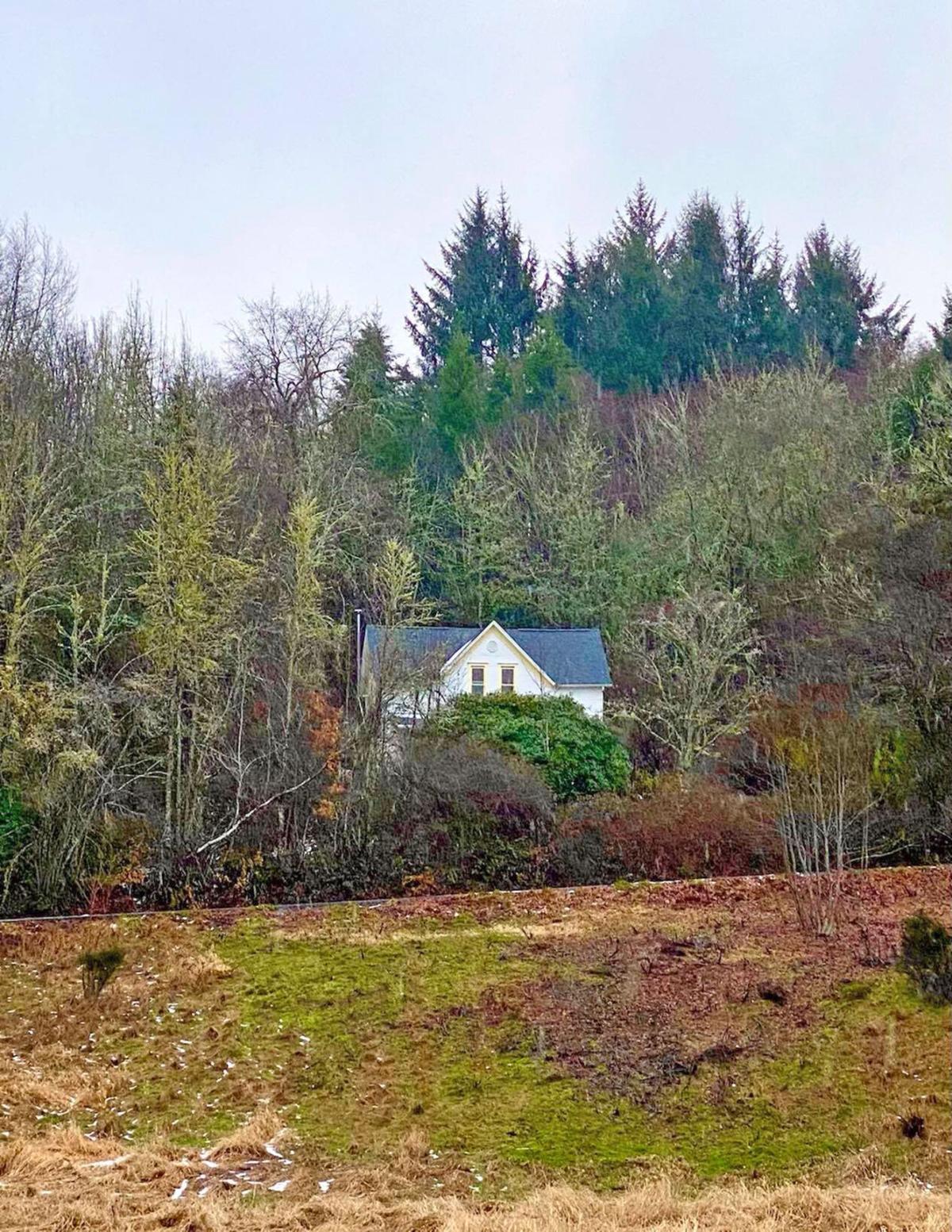 A restored farmhouse above Grays River serves as homebase for Bob Pyle, the Pacific Northwest’s most acclaimed nature writer.

The Grays River Covered Bridge — the last such structure in Washington state following destruction by wildfire in September 2020 of one in Whitman County — is a picturesque and easy-to-visit historical artifact just off State Route 4 in Western Wahkiakum County.

The carefully framed interior of the Grays River Covered Bridge serves as a home to birds and hosts a popular annual fundraising dinner.

The light at the end of the covered bridge opens out onto the lush farmland of Western Wahkiakum County.

Years ago, William Least Heat-Moon wrote a breakaway book called “Blue Highways.” It stirred up a strong following. Essentially, the author insisted that we get off the major thoroughfares and explore the back roads of America. Maybe it was a metaphor for a fuller life. After a recent appointment in Longview, I chose to drive the slower route home, following Highway 4 west from Longview to Seaview on one of the most scenic roads in Washington State.

It was a cold windy day with snow flurries blanketing the high country like the white markings on certain forest animals: the white-tailed deer, the wolf or bobcat, to mention a few. Against all the beige colors wrapped in winter green, the storms left handsome patterns on the hillsides. Down below, the Great River tumbled along. This season it roiled, unusually high because of large amounts of the ever present rainfall, the freshets. Winter’s beauty is as attractive to me as the other three seasons, each in its own indomitable way.

A drive of surprises

This 90-minute drive is full of surprises. Years ago, a few friends and I kayaked from Bonneville Dam to Cape Disappointment following the path laid down by the Corps of Discovery in 1805-06. In slow motion, we crept along the Columbia, reveling in the natural beauty, to say nothing of encountering the same inclement weather that so roughed up the Lewis and Clark Expedition. It was November and it rained and blew and puffed like Mr. Wolf blowing down the shanties of the Three Pigs.

Each storm has its own beauty. So do the first amber tips of the alder trees and willows as springtime approaches. This section of the river is not undiscovered, but habitation remains lean with the small exceptions of Cathlamet and Naselle. Along the route — on narrow sandy beaches peppering the way — the Chinook Nation left its mark. It is not so hard to imagine thousands of Native Peoples living here, lured by the abundance of salmon and a landscape that stamped a comfort level on the grateful faces of these first inhabitants. Compared to other parts of the continent, living was relatively easy.

And it’s a place that’s easy on the eyes as the highway snakes beside the mighty Columbia, the great river of the West.

Somewhere across the Grays, I slowed and made a departure down to the Grays River Covered Bridge. Under it, a swollen river raced through. The fields surrounding it belong to the dedicated, originally the Finns who settled here. And others, logging and fishing and struggling with subsistence farming. No, pioneering effort was ever easy. There were winters when even the Tsinuk suffered, lean winters, when dried smoked salmon cakes and berries preserved in eulachon grease barely fed their tight bellies.

But today it is all about scenery, so lovely, so rich.

Sailing beside the blue highway, the mighty ocean ships parallel State Route 4 on their way to large ports in Longview and Portland. One might define the big-hulled vessels as handsome. We generally make light of the arduous tasks of our seamen, instead, cloaking their existence with romance. But let’s be honest here: there has always been an allure to the boats and ships that ply the Pacific waters. We need not be reminded: Life on big water is a dangerous love affair!

Humans in the landscape

A number of islands dot the river reach, most sparingly inhabited by humans and animals alike. The interpreter, hunter and guide of the Corps of Discovery, George Drouillard (Shawnie/French Canadian) killed three bucks on Deer Island. By the time he rounded up a party to fetch the venison, the condors had beaten them to the prize. In an hour or two, the soon to be endangered raptors stripped the limber-footed mammals to the bone. In his brief stay on the Washington shore, Capt. Meriwether Lewis shot two. By the mid-1970s, this would have amounted to a significant fraction of all the condors that still existed in the U.S., about two dozen individuals, to be exact.

Above the twisting tributary, Grays River, sits a white Victorian house. The highly regarded author and poet Robert Michael Pyle lives there, and has written here for over 40 years. He is a national treasure, and certainly, the pride of our community. Pyle watches the river with keen eyes — the valley, the labors of local farmers and fishermen and loggers (as documented in his award-winning “Wintergreen”) — all with uncanny interest. As attested by his 2007 essay collection, “Sky Time in Gray’s River,” he insists that we learn to mindfully appreciate the remaining beauty that marks his good earth (la terra) and ours — 30 miles downriver — as a most-special destination. Do we take such landscape for granted? Well, maybe, at least part of the time. And sometimes we curse it, as when those heavy rains pour down for days, and the Grays rises dramatically. When we walk through several inches of mud to get to the front door and those handsome curls hang limply after an hour in the beauty parlor. Oh, the inconveniences of winter!

But then the mist and rain clouds frame the covered bridge in a gossamer shroud, and the sun decides to poke through, and we are lost in the sheer beauty of it all. The Grays, Deep River and the Naselle flow through fertile fields on their way to the Yakaitl-Wimakl, the Columbia, tattooing the landscape with a silver-thawed bliss. And the ships plow through. And the salmon run in great numbers. And we live happily in rural America, lost in our dreams.

Next time you drive home from Portland or Longview take the longer route. Drive the Blue Highway.