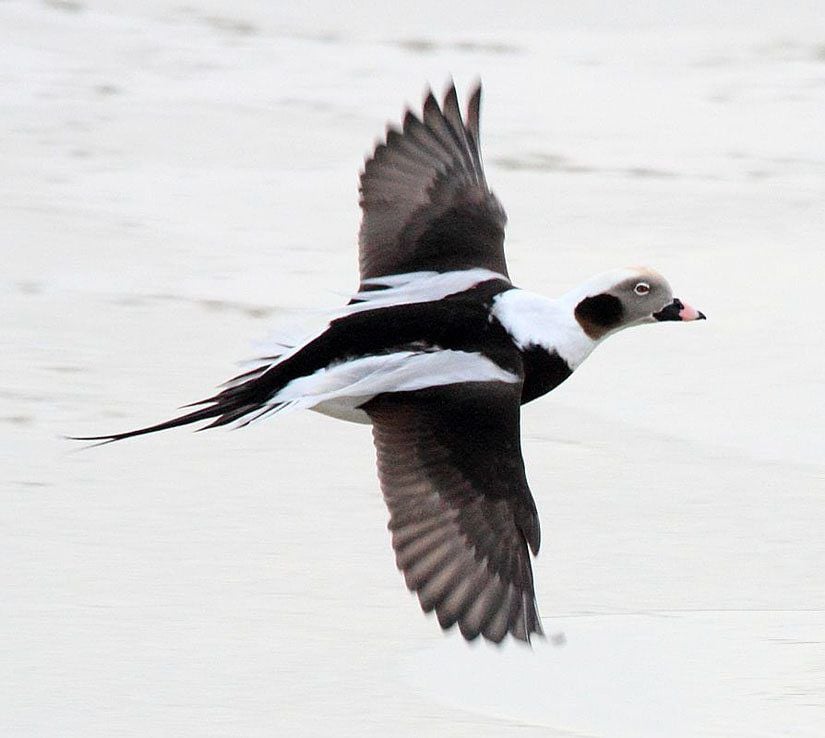 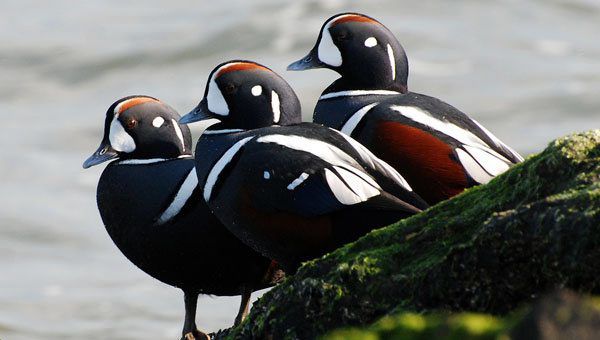 www.allaboutbirds.com Harlequin ducks like these may look fancy, but they're tough and spend their winters in the maritime interface.

www.allaboutbirds.com Harlequin ducks like these may look fancy, but they're tough and spend their winters in the maritime interface.

The ducks were barely visible on the icy, shifting sea. Gray-black and white, they dove and splashed, necks extended and heads down on the water, wings beating and sending froth over each other. Occasionally a long, thin tail was visible against the stormy waves. The water temp was in the mid-thirties and the wind was blowing at twenty to thirty miles per. They really didn’t seem to notice or mind, though. These were sea-dwelling long-tailed ducks.

Long-tailed ducks spend their lives in the far north. They breed in Alaska and the territories north of Canada, coming down to winter off our shore. Even when they are here, they usually stay far out from land; a boat or a big storm is necessary in order to see them. After our big blow a few weeks ago, three long-tailed ducks were seen just off the infamous Parking Lot C in Fort Stevens State Park near Astoria. I didn’t get there before they moved on. Instead, I traveled to the Straits of Juan de Fuca, just off Sequim to see my lovely ducks.

There was a small flock of six. They were so far out in the Strait that at first, I couldn’t say ‘long-tailed duck’ for sure. Patience paid off though, and either the incoming tide pushed them in, or they moved in for better fishing. A good, long look through the scope reveled that it looked like they were playing, splashing and chasing each other. Probably early courting behavior.

We ducked happily into the car and savored our find over a cup of hot coffee. Winter often looks so much more welcoming from a warm, dry place!

Harlequin ducks are aptly named because they are artfully designed with a series of bright lines, dots and splotches on a dark background. These, too, are hearty ducks that prefer to be at sea in the winter. In the summer, though, they love high mountain streams that run fast and deep through the northwest forests. They will build a nest on a steep bank over the water and raise their ducklings. These little guys will learn to surf the rapids with their parents. They can be seen, vibrant little puffs rocketing along in the white water behind mother.

I first saw harlequins on a long hike to a northern river one hot July day. The mosquitoes almost carried us off before we got to see the ducks. These kinds of hikes are chancy, because there is no guaranteed bird at the end. So, you learn to appreciate the journey, bugs and all. We reached a place on the trail where, if you looked way over, we could see rocks jutting into the river. Harlequins had been seen here before, and pairs often will return very close to prior nesting sites. So it wasn’t exactly a miracle, but it felt like one, when we spotted the hen harlequin and her brood of four. She was settled watchfully on a rock near the roaring water and her little ones bounced and chased each other in and out of the torrent. We were so far above, and the water was so loud, that we didn’t disturb the family.

When winter comes, harlequins move to the ocean and again, like to hang out around rocky, turbulent shores and jetties. Jetties along our coast and even farther south are always good places to check. The ducks will be loafing in the water close to the rocks, or perched very near.

Closer to home, the mallards, hooded mergansers and a scattering of wood ducks are loafing on the lee side of the pond. There is no wind to riffle the water, and the long grasses have all turned golden in the cold. It’s late afternoon and the flock is beginning to settle in for a chilly night. There is soft talk, and an occasional squeak from a wood duck. A heron floats by, low to the water. He gives his low, prehistoric-sounding squawk as he passes. Another winter day is fading and the flock moves a bit tighter for security and warmth. A pale quarter moon sails through the thin clouds and all is good in the world.