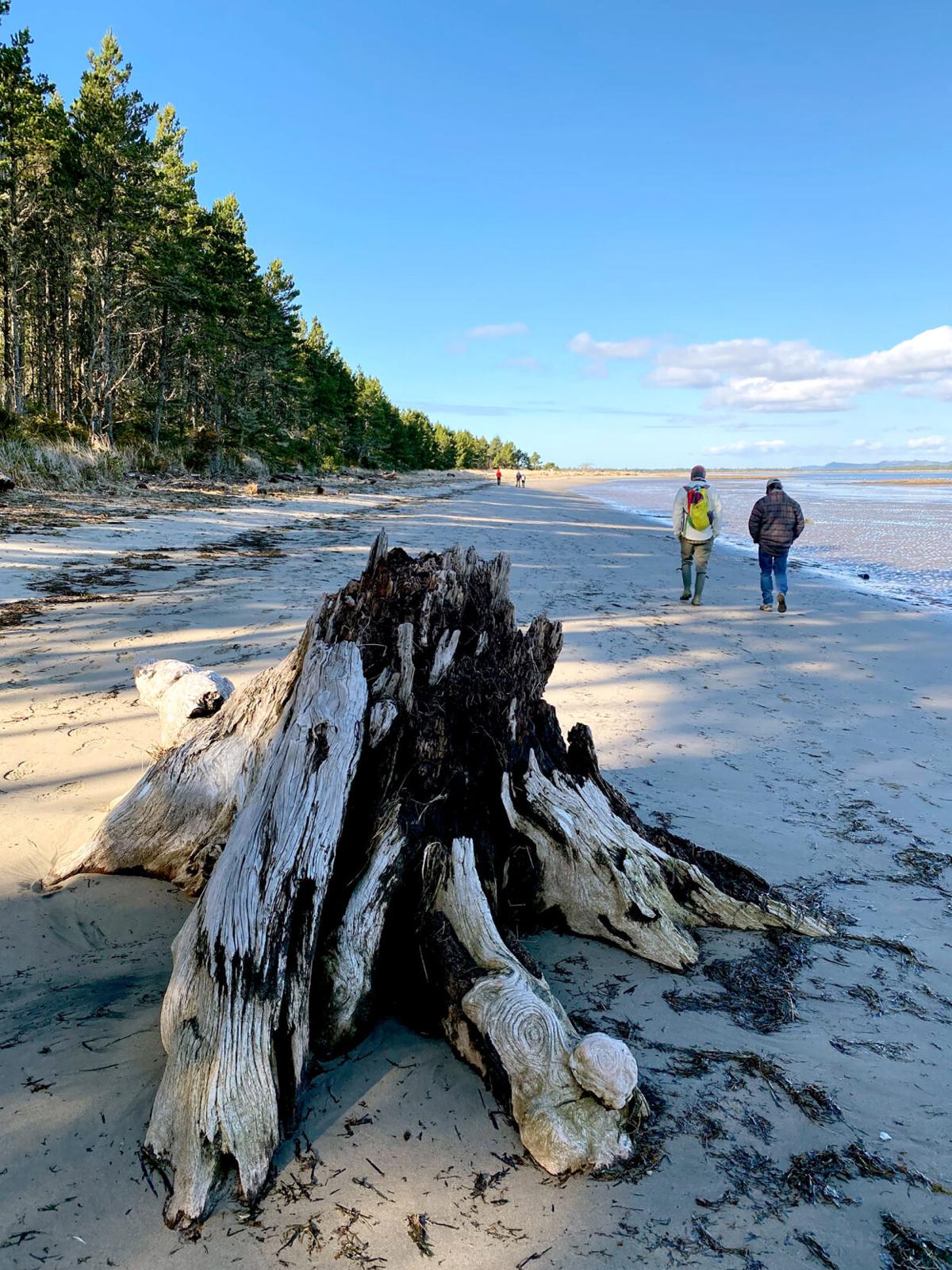 This ancient stump adorns the tideline along the inner shoreline south of Leadbetter Point in the Willapa National Wildlife Refuge. 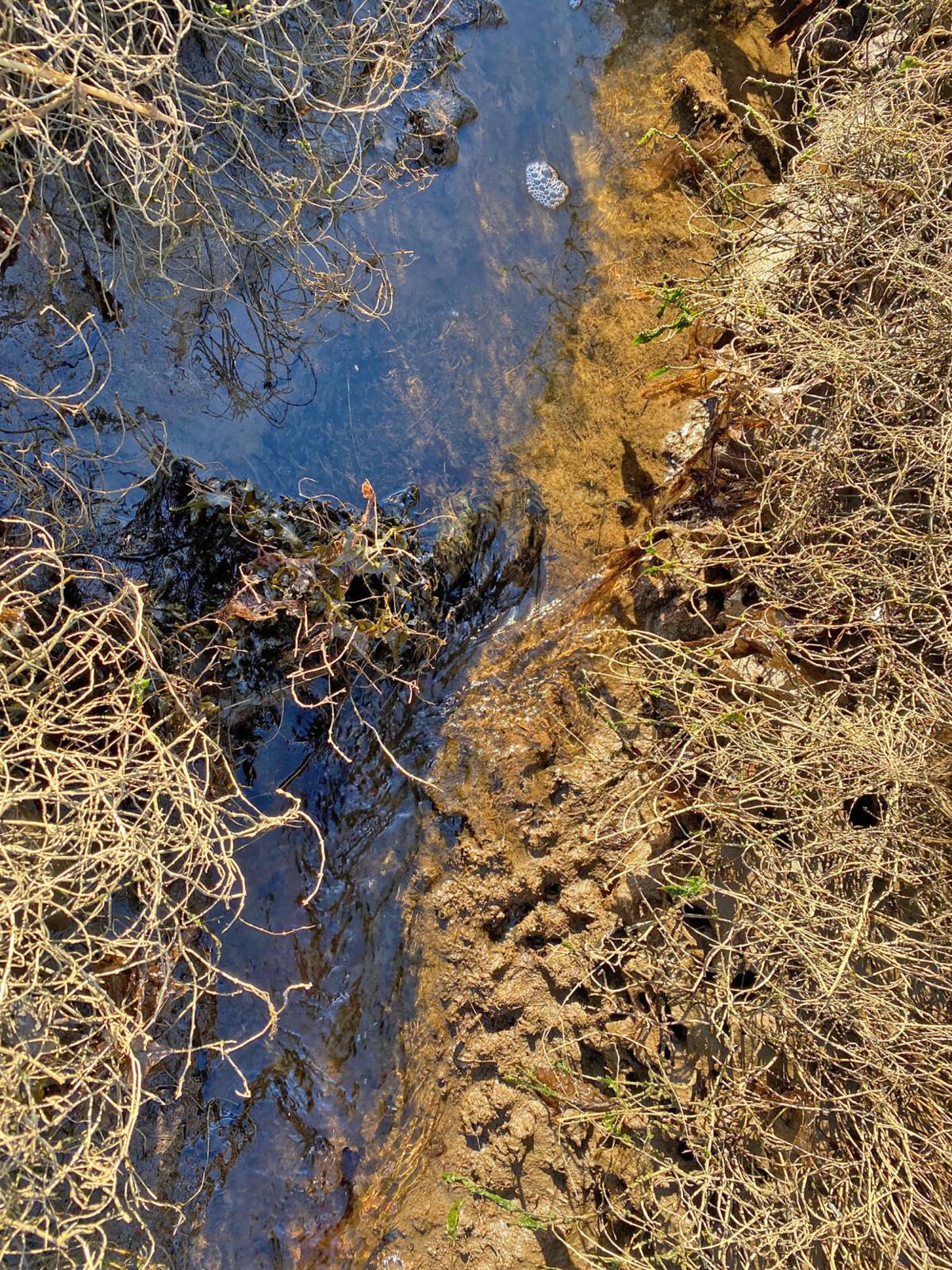 Much of Willapa Bay’s northern inner shoreline is laced with small sloughs and tidal flows. Most can be stepped over, but some are deep enough to require cautions and detours. 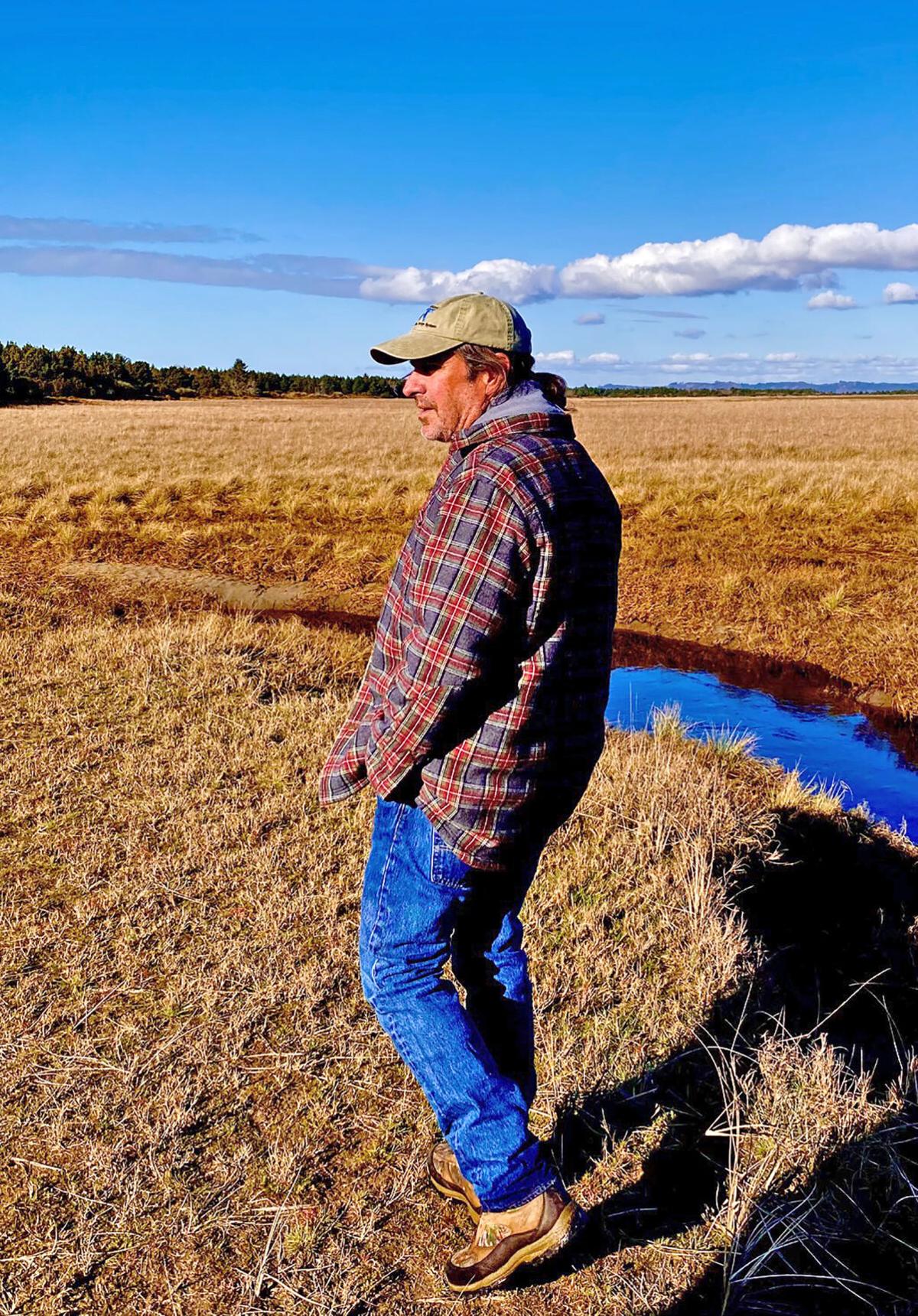 Charlie Pelizza skirts around a tidal inlet near the northern tip of the Willapa National Wildlife Refuge. 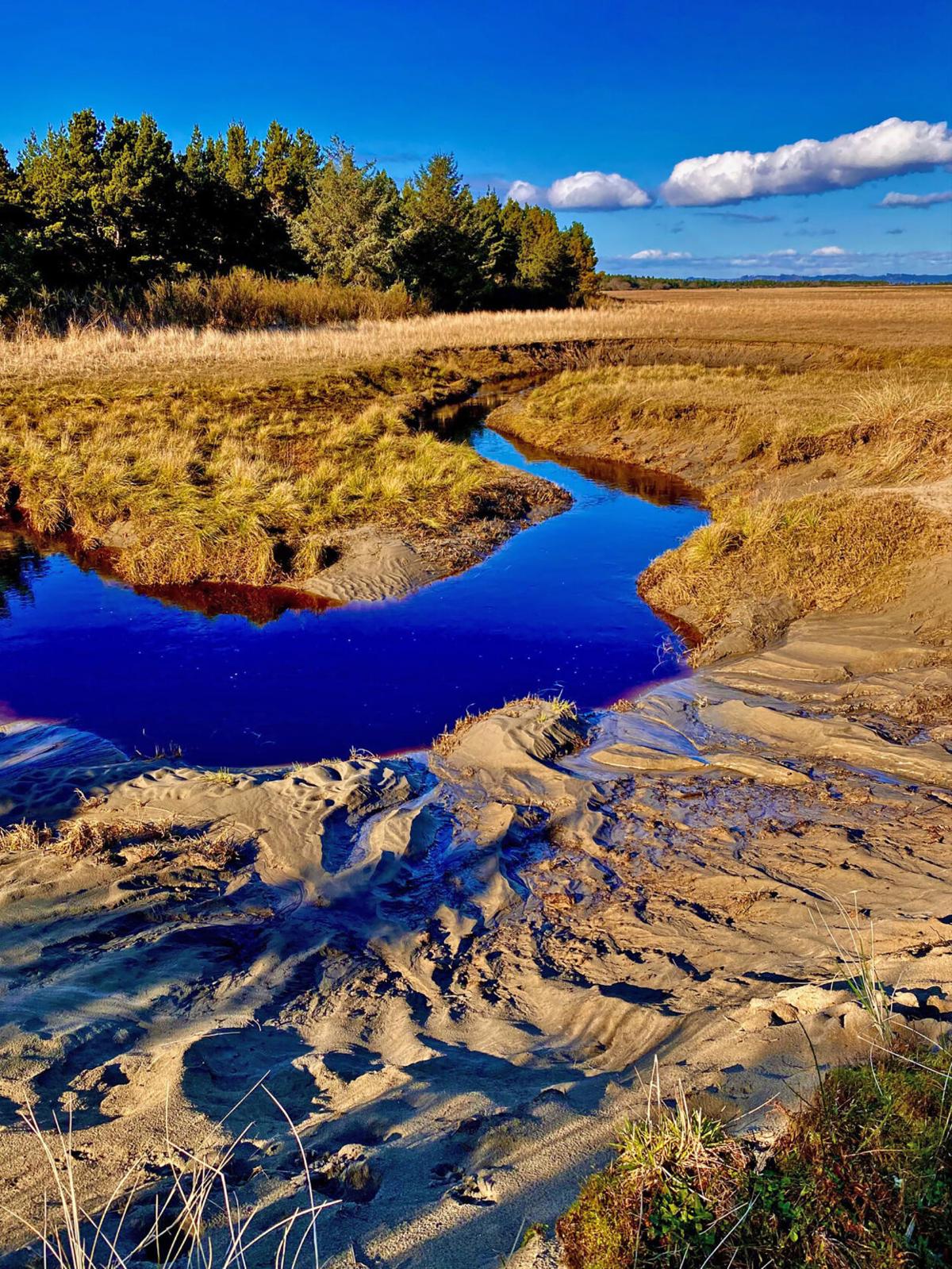 A meandering slough links the fresh and saltwater drainages in the wild and rich habitat of Willapa National Wildlife Refuge’s Leadbetter unit. 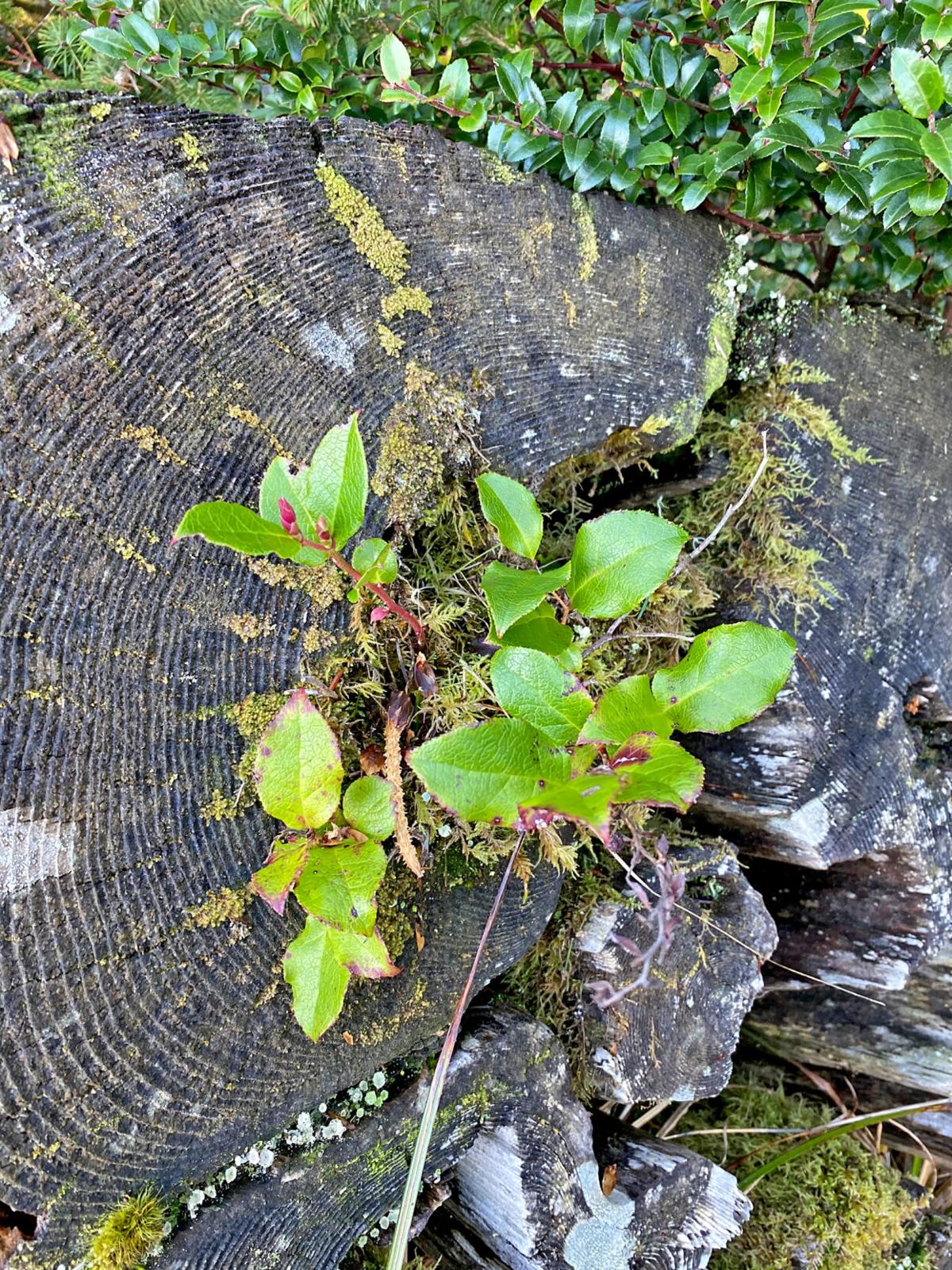 The observant will spot many small treasures like this one that punctuate the refuge.

The remains of a tree lie stranded on the Willapa mudflats near the peninsula’s northern tip. The hills above Tokeland rise along the northern horizon.

Much of Willapa Bay’s northern inner shoreline is laced with small sloughs and tidal flows. Most can be stepped over, but some are deep enough to require cautions and detours.

The observant will spot many small treasures like this one that punctuate the refuge.

Welcome to a big bite of Paradise

We slowly amble up a short stretch of sandy shore, heading north along Willapa Bay — a bay once called the Shoalwater, or before that, by Native peoples, the Tsinuk (Chinook): the Wilapah.

Ahead, we spot a gentleman with a tripod and telescopic camera spotting and photographing sandpipers. I certainly cannot identify all of them, even up close. The photographer has an advantage called the camera’s eye. But then, his human eye is mighty good, too.

Charles Pelizza is the recent president of the Friends of Willapa National Wildlife Refuge, a retired fish and wildlife manager. He knows the small birds, even at a good distance, but then, on this clear Northwest day, he is not completely certain. An education in bird identification is not an easy degree.

“Yes,” agrees the photographer, and then points to another species.

Heck! Growing up we called all of them, “snipes.” So much for my contribution!

Our other companion is Steve Romero, an outdoor advocate, if ever there was. I call him, Mr. Mushroom. He hunts them with fire in the belly, and prepares them in the same vein, passionately. Walking with Steve is like following a robotic scanner. His darting eyes never relax.

As Ken, the photographer, zeroes in his lenses, I offer an apology.

“Sorry, to interrupt. I probably scared your birds away.”

And that said, says it all.

One of those perfect winter days

It was a perfect, blue-bird day in mid-winter. One that no one expected. The big water was ebbing. The sparkling sun-lit surface ricocheting a dozen or more hues of blue and silver, pewter and lavender. Hundreds of waterfowl — pintail, mallard and Widgeon — were munching and chattering away. A pair of peregrine falcons flew over, issuing a high scrambling call, perhaps a scolding, as if to say, “This land is my land.”

The funny thing is: This land is your land. Well sort of! You, citizen elect, of good stead and strong moral fiber, a taxpayer who funds the good work, this refuge and so many others across the nation. And to say nothing of the several offerings in our own bay and along the tributaries like the Naselle and Bear rivers, such as the Riekkola Unit, Long Island and the Art Trail at the lower launching facility on the Naselle River. Of course, nobody should own such places. The Tsinuks knew this. And the Haida and Tsimshian and most of the other indigenous peoples. They simply were protectors. Guardians. After all, the Creator offered these lands to all humans. The Natives considered themselves as caretakers.

Charlie has worked as a park ranger for 40 years. Crossed the country, repairing and protecting much of this fragile landscape. At times he was held spellbound by the natural beauty. He worked the South Pacific, snorkeling in the crystal clear waters. Was raised and educated in the Northeast and found comfort there, along the rivers and forests that seemed to call his name. He stood above the Grand Canyon; stood awestruck under mighty redwoods and explored Ansel Adam’s old haunt, Yosemite. Then he settled here, on the Long Beach Peninsula. Love at first sight.

“Heaven,” he says, “This little bit of paradise.”

The First People lived on this bay for generations beyond modern memory.

The rich tidal waters sustained them. While the Corps of Discovery hunkered down in Hungry Harbor, addicted to a single menu of red meat, the Tsinuks harvested clams, oysters, sturgeon and salmon. They pulled flounder from the tide pools. Ate mussels. With bow and arrow, they felled the abundant waterfowl. The Native peoples boiled and roasted seal. Reveled in an occasional whale. Lastly, they gathered copious quantities of roots and berries and edible greens, like the sea beans (Salicornia) that cover areas of the tidelands today.

In other words, Willapa Bay and the sandy peninsula replenished them, both bellies and souls. As it does for us, today.

As a kid I hiked here, gathered mushrooms, hunted the abundant waterfowl, and learned to love oysters and clams, searing them over an open bonfire, the bonfire of my vanities. When I was thirteen, we lost a dog here. Took two days to round her up. The park is that large. And more than once, I have stumbled out of here, long after dark, grateful to find my way home. It is still easy to get a bit overwhelmed by the sheer size of it all.

And now, preserved and protected, we remain the recipients of this stunning body of land and water.

Welcome to a big bite of Paradise.