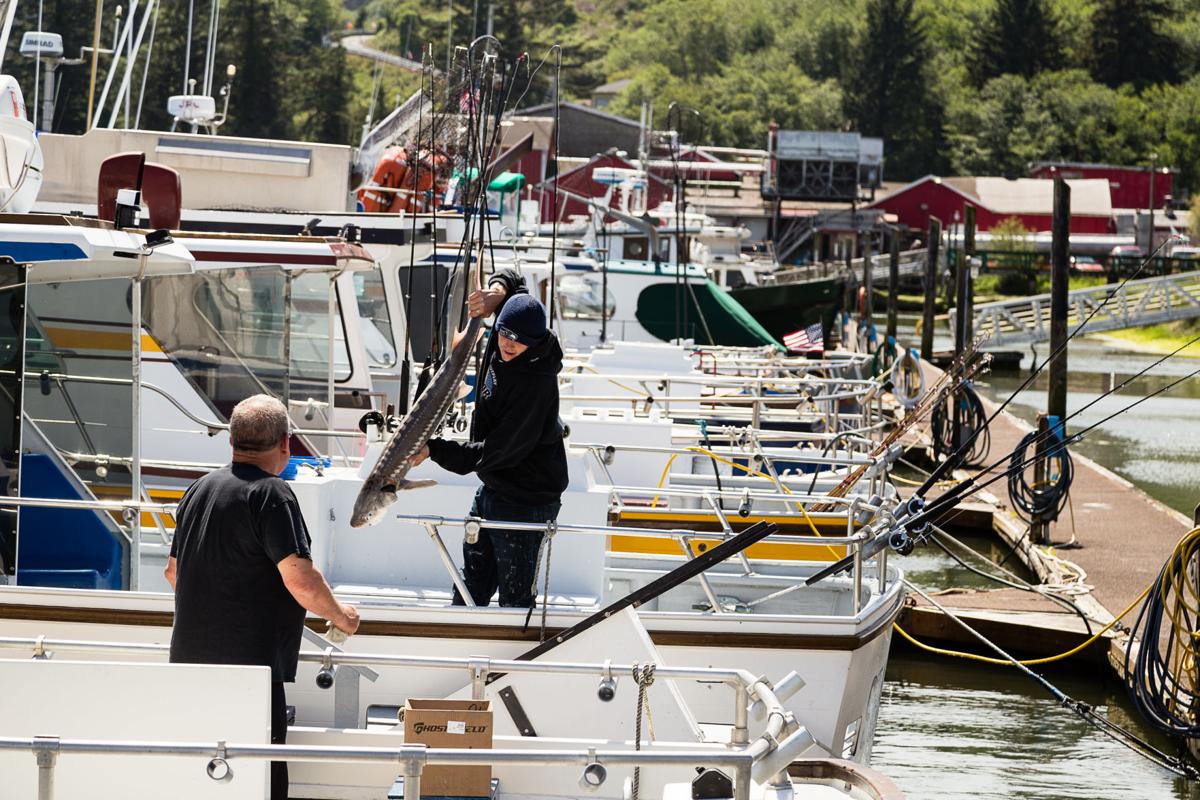 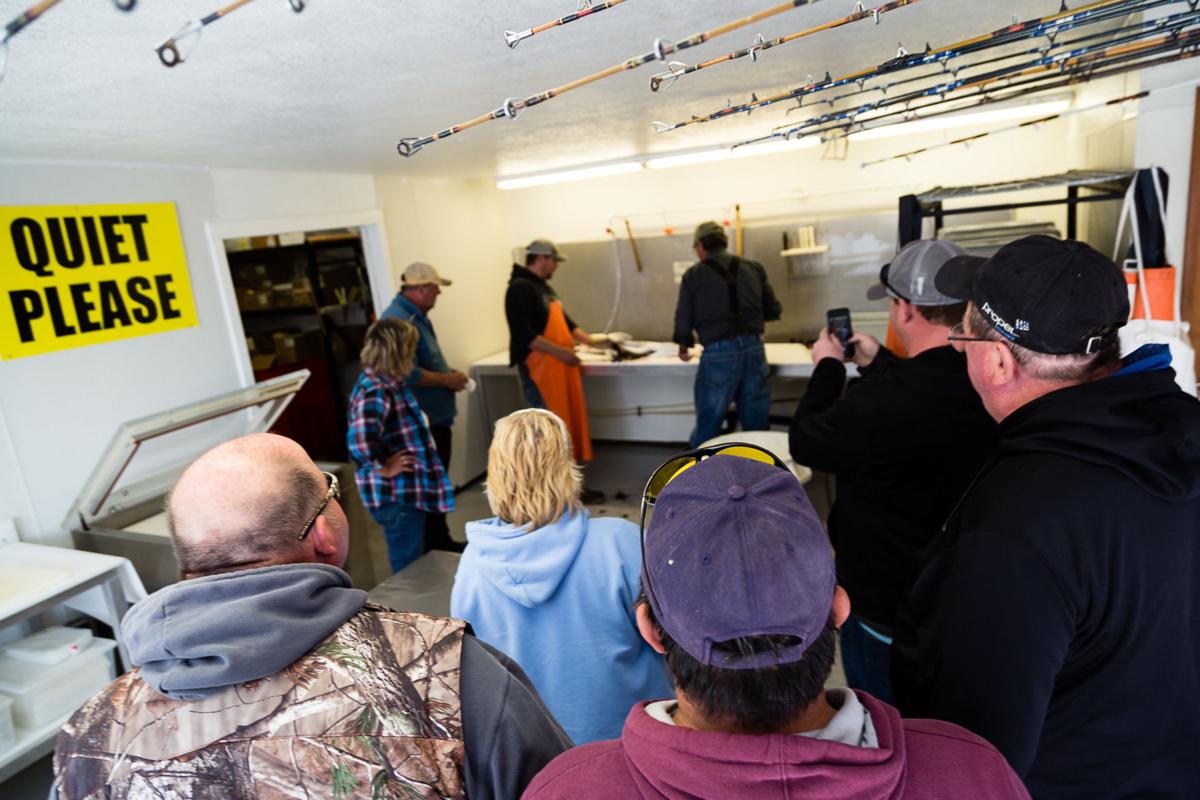 A crowd gathered around David Gudgell and crew as they filleted the first sturgeon of the season. 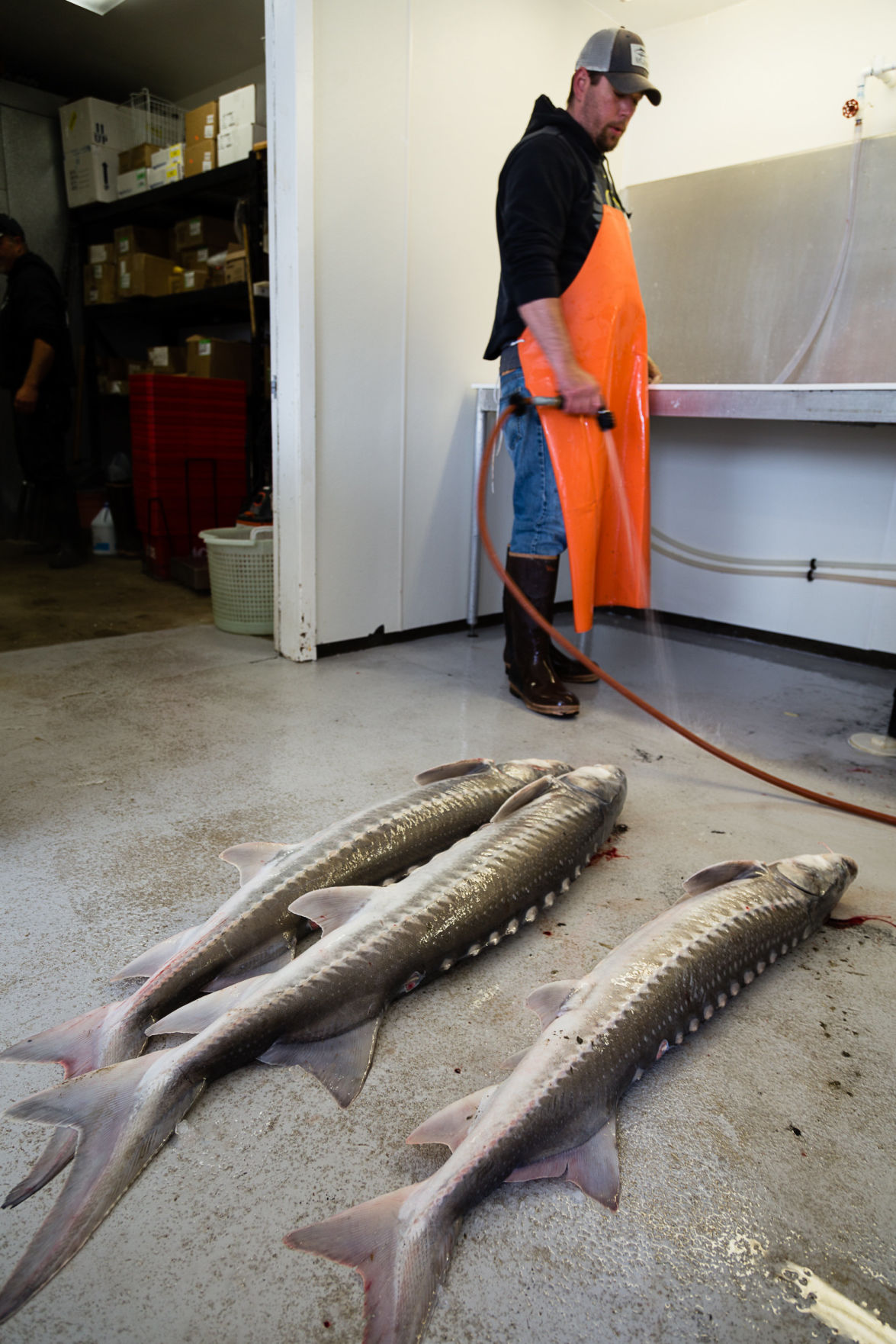 After three years of catch and release fishing, anglers are allowed to keep one sturgeon between 44 and 50 inches per trip.

A crowd gathered around David Gudgell and crew as they filleted the first sturgeon of the season.

After three years of catch and release fishing, anglers are allowed to keep one sturgeon between 44 and 50 inches per trip.

ILWACO — As the sun rose over the Ilwaco mooring basin Monday morning, the sleepy port was already alive and buzzing. Charter-fishing crews readied gear and talked about the weather and bar conditions with customers in between sips of coffee. Sturgeon season had finally returned. Hopes were high after three years of catch-and-release fishing for the species on Lower Columbia.

As each boat came back with a couple keepers, there was relief but little outright joy.

“For the charters, it wasn’t as great as we would like it to be,” Rob Gudgell, skipper for Pacific Salmon Charters, said. “We expected to catch quite a few more fish.” He said factors ranging from river conditions to food sources contribute to the low initial catch rate.

“Fishing was fairly slow,” said Gudgell who saw four keepers caught on the single boat they sent out. “There weren’t a lot of fish caught for the amount of pressure that was there,” he said.

Seabreeze and Coho Charters each had enough fishermen to fill two boats, but only a couple sturgeon were caught with no boats reportedly “limiting out.”

“It was a tough fishing,” said a Washington Department of Fish and Wildlife official who was on hand monitoring the catch coming back to port. “A lot of people caught fish, but nobody got their limit.”

The slow start isn’t uncharacteristic for a fishery that hasn’t felt pressure from charter fleets in years.

“It’s always a slow first day when you haven’t been out there fishing for them for so long,” Gudgell said. Finding the fish and their patterns during the tides has been more difficult with high-water conditions on the Columbia, according to Gudgell. The adverse conditions can have a negative effect on anchovies, a primary food source for sturgeon.

“With all the freshwater (coming down the Columbia) the anchovies aren’t coming in and out like they usually do,” Gudgell said. As a result, he believes the fish aren’t sticking around as long before continuing up river.

Washington and Oregon fisheries managers decided last week to end a three-year moratorium after population surveys showing the number of legal-size sturgeon below Bonneville Dam has grown each year since 2014, when the fishery was closed to allow stocks to rebuild.

Anglers have a daily limit of one fish measuring 44 to 50 inches from its snout to the fork in its tail. An annual limit of two white sturgeon, regardless of where they are caught, also is in effect.

Ron Roler, a fishery manager for the Washington Department of Fish and Wildlife, said the two states are taking a “cautionary approach” to the fishery below Bonneville Dam.

“We believe the sturgeon population in the lower river has increased to the point where it can support a limited fishery, without impeding future growth,” Roler said. “This is a very popular fishery, and we need to take this one step at a time.”

Roler said the fishery managers currently estimate there are 165,600 legal-size fish in the Columbia River Bonneville Dam. The harvest guideline for the current fishery is 3,000 sturgeon.

In designing the fishery, the two states adopted several measures specifically aimed at controlling the catch, Roler said. Those measures include:

• Holding the harvest rate to 3.8 percent, compared to 14.5 percent in years before the closure.

Roler noted that the fishery will overlap with the arrival and departure of the Rose Festival fleet on June 10 and June 12. Anglers are advised there is a Homeland Security buffer of 500 yards surrounding all naval vessels and boats are not permitted to approach within 100 yards.