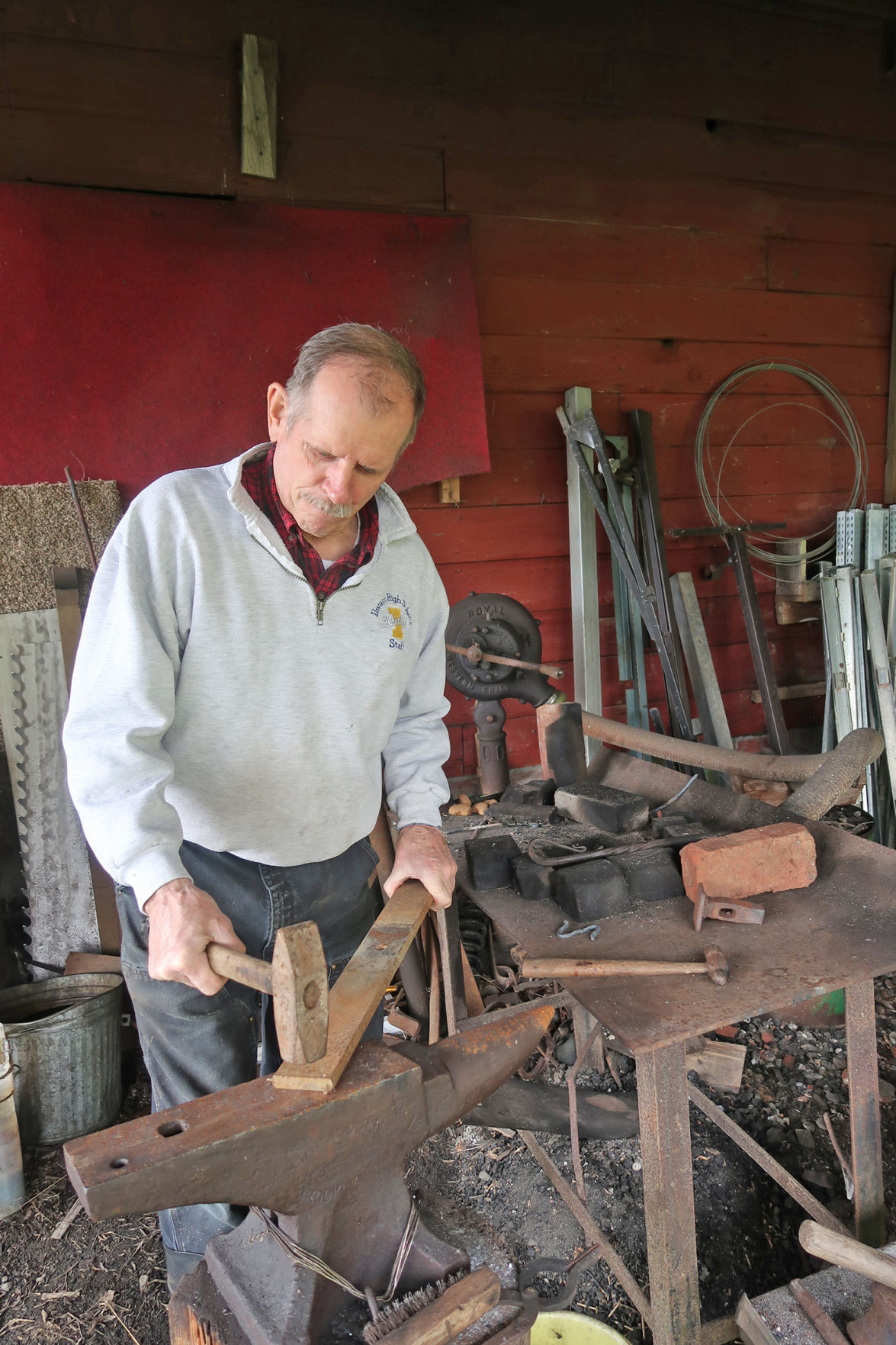 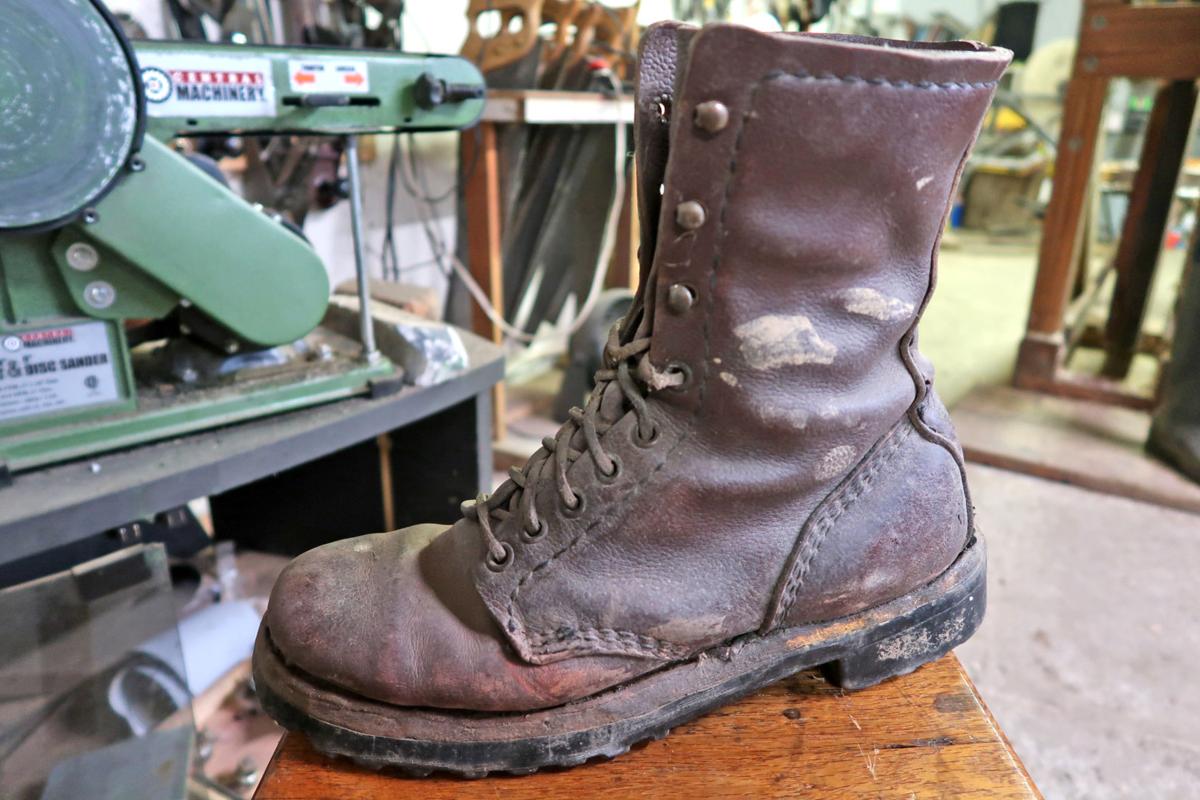 Repairing heavy-duty work boots like this one is a valuable skill but one that’s hard to locate in the modern world. 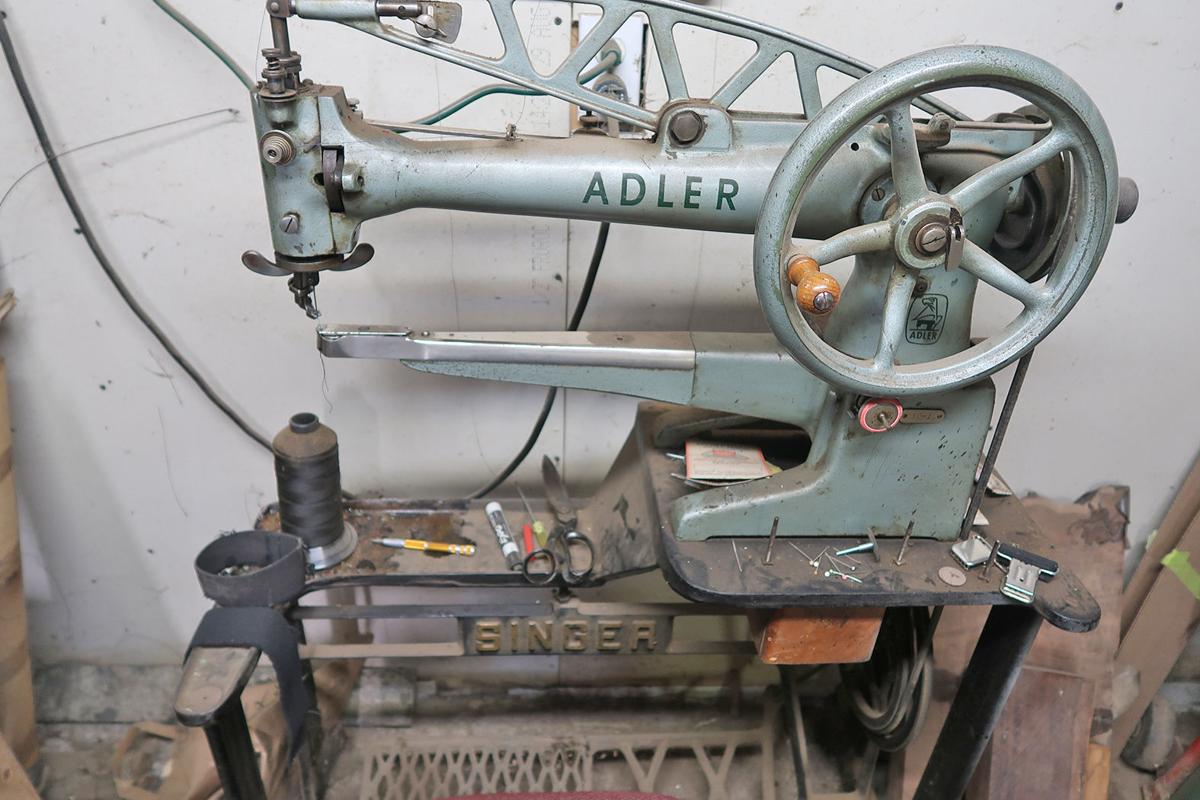 This industrial-strength Singer sewing machine might almost qualify as an antique but still performs valuable functions, much like its owner.

I met Larry “Dutch” Holland when I noticed the “eggs for sale” sign in front of his small farm in Menlo and stopped to inquire. When Dutch opened the door, he was wearing an apron and preparing the single daily meal for himself and his wife Sally. It turns out that Dutch and Sally had been two-year Peace Corps volunteers in Kenya, (1988-1990), where time constraints limited them to cooking just one meal a day. It’s a habit they’ve maintained ever since. I bought a dozen eggs that day, and returned often over the next year for eggs, each time learning more about this complex, interesting man. Dutch says that the Peace Corps was the most stimulating and challenging part of his adult life, but becoming a farmer was the most rewarding. It was farming that led him to milking his own cows and goats, making cheese, butter and soap, along with canning and consuming his own garden produce.

In Kenya, Dutch’s primary assignment was teaching math and science to students in a remote, isolated village between Nairobi and Mombasa. His secondary assignment was to teach the boys of the village how to tan cow and goat hides and to sew leather, as well as how to make their own sewing needles and awls, and how to put a razor sharp edge on their skiving knives. Dutch sets the scene for me as he describes teaching in a very poor village with no electricity. Water had to be hauled from a natural spring about two kilometers distant. Everyone was barefoot, and those few who owned shoes only wore them to church on Sunday.

One morning in class, Dutch asked his students if any among them had shoes in need of repair, and if so, bring them in and he would try to mend them. Though many fit that bill, a lone boy stepped forward the next morning and handed Dutch what appeared to be little more than a handful of scraps. The students roared with laughter at such a ridiculous and hilarious prospect. Two weeks later, during morning class, Dutch reached into his backpack and withdrew a perfectly resewn pair of leather shoes. The students were incredulous and gasps were heard throughout the mud-constructed classroom. From then on, what do you know — every boy wanted to be a leather worker.

Shortly after returning home, Dutch accepted an opening at Ilwaco Jr/Sr High School, and for the next 13 years, went on to teach mathematics, chemistry and physics. It was there that he built his first wood-turning lathe. Constructed of 2x4s, it became a classroom fixture, where, over the years, hundreds of students took turns creating various wooden products. Dutch himself produced and sold salt and pepper sets; something he continues to this day. It was at his home in Nahcotta where he taught himself the art of blacksmithing. Many years later, he continues to forge tools and trinkets. A little over three years ago, Dutch built a spring-pole lathe in his smithy and began turning wooden bowls. The spring-pole lathe dates back over 1,500 years. Brian and I have both taken turns using that lathe. It’s a quiet, peaceful and therapeutic exercise, both mentally and physically.

Dutch is also a beekeeper, and it was the combination of chickens and honeybees that brought us together again. I naturally thought of him when our friends needed a colony of honeybees extracted from deep within the walls of an old house they were selling. The new owner was deathly allergic to bee toxin, and Dutch was happy to help us extract the colony — bringing out a bee vacuum, and working to get the bees safely to their new home on our property. This meant working with my husband and our friend Tim for hours, to tear into the house exterior allowing us to see the enormity of this colony that had established a hive that consumed a large section of wall, up through the entire side of the house. It was an amazing site to behold — from a distance. Eventually, they were loaded up into our truck and delivered to set up shop at our home where we excitedly adopted them.

This meant twice vacuuming them up, as bees are so intelligent that they will hide their queen if they sense danger. They had probably escorted her to safety to a closet in the top corner of the wall. It was important to capture her with the remainder of the colony.

I naturally thought of him when our friends needed a colony of honeybees extracted from deep within the walls of an old house they were selling. The new owner was deathly allergic to bee toxin, and Dutch was happy to help us extract the colony — bringing out a bee vacuum, and working to get the bees safely to their new home on our property.

Our bees thrived only because of the knowledge that Dutch kindly imparted to us, such as how to treat bees for mites — how and when to feed them — and just how delicate the balance is in keeping them alive. I guess I was under the impression that you give them a box to live in and they live happily ever, thankful not to be homeless, and produce gallons of sweet honey that you just pour straight into jars. Hardly. Keeping bees and extracting honey is nearly as complex as the nature of the bees themselves. The next thing I learned about Dutch is his capacity for compassion and willingness to help anyone in the community with his expertise on many a subject. He provides a bee education center at the Pacific County Fair to help educate the public about the plight of the honeybee.

Brian and I have learned much about honeybees over the past several years, and Dutch continues to assist during hive inspections. We’ve extracted several gallons of honey since we became beekeepers, and our garden has flourished as well. Shortly after the extraction of the bee colony, Dutch asked if I’d like to come over and see his workshop. I took him up on it and I’m glad I drove the eight miles to his house. I was to learn a great deal. Behind the shop, Rusty the bull came running down the hill as Dutch called to him and offered a treat. Rusty likes to show who’s boss by gaslighting Dutch as he overturns boxes and rearranges chairs when Dutch isn’t around. It made me wonder if he entertains himself with, say, the Hokey Pokey, during his field solitude. Rusty has proven to be a smart and athletic bovine. “Put your left hoof in — put your left hoof out…”

The love of NW wood

I stepped back in time entering his wood shop. This is a man who definitely thrives with challenge and is not afraid to take risks, neither with his work nor his life. I was in awe as he showed me his handmade tools and machines, how each worked, and I learned more about his fascinating life. Using a variety of tree chunks that he gathers and cuts himself, Dutch turns bowls with the use of his homemade spring pole lathe as he pumps the treadle to spin the lathe. He expertly molds the bowls with the steel tools made in his forge. Though he makes the work seem effortless, when I take over the lathe, I find it about as easy as grinding a bowl with my teeth. This is definitely not a trade I will master in my lifetime. The tree chunks are kept in a tub of water to cure until being turned into the next work of art. These are Oregon ash, alder, and black cherry, to name a few. I have also seen his work with purple heart, and it is stunning.

Dutch sells his tools, dinner gongs, sets of salt and pepper shakers, and bowls throughout the world, reaching the likes of Iceland and Australia. With each piece of art, he provides a certificate of authenticity and a letter. The letter addresses how he matches the grain of the wood to the personality of the recipient. He says, in every life there are tough times, and every piece of wood has flaws (or one could call it character). This special letter symbolizes a period of time in their lives when they faced and overcame adversity. He expertly molds the bowls with the steel tools made in his forge.

Before the coronavirus, Dutch frequently gave tours of his farm, allowing visitors to feed the animals, to pet Rusty the bull and collect eggs from the hen house, and pump water from the creek using his pitcher pump. Everyone was also encouraged to use the old fashion tools that Dutch still uses today; the hand plane, the brace and bit, and the gimlet and pump drill (a tool used to bore holes through glass). Everyone had their chance to hammer hot steel and try out both the treadle lathe and its mother, the spring-pole lathe.

Dutch often says he was born centuries too late, and touring his farm makes one believe it is true. It’s a slower life, and a quieter one. Most tools operate by muscles of arm or leg, and the sound of work done by plane or brace and bit is both soothing and pleasant. Many of Dutch’s former high school students have visited the farm gaining first-hand experience of life during earlier times, and often celebrating with a picnic of barbecue and homemade potato salad.

For the past two years, Dutch has set up his portable spring-pole lathe and shaving horse at the Pacific County Fair, where boys and girls, men and women have all been given the opportunity to experience woodworking and how it was done over a thousand years ago. Last year he even took his homemade hay baler and a few youngsters were able to process a bale of hay using just human power. Several local farmers were on hand to witness the event, and while it’s unlikely any will go out and build such a machine, I’m sure they all appreciated the effort that went into making a bale of hay.

We owe Dutch a wagon full of gratitude for imparting his vast knowledge onto the rest of us. Where would we be without the ability to pass expertise from generation to generation? Dutch is a talented, valued member of this community. We may never get to the bottom of this multi-dimensional character. In his spare time, when he isn’t volunteering his services, he can be found sewing masks for the coronavirus — always giving back to the community. In the corner of his shop sits the dusty first pair of boots he handmade in Africa, tattered from years of use. I might ask him to sew me a pair of saddle shoes. I am confident he could do an outstanding job.

'There are no loopholes': Actress describes 'Camp Quarantine'