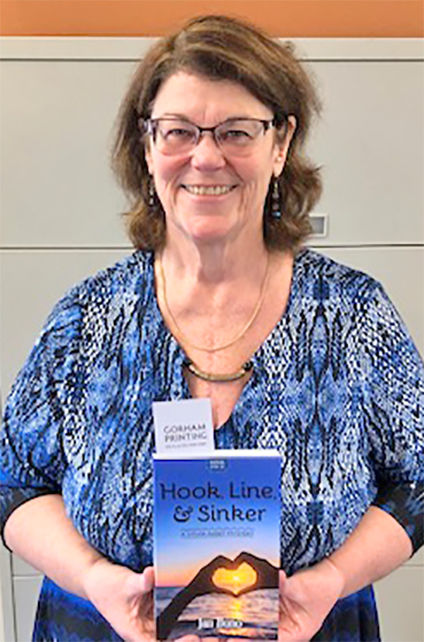 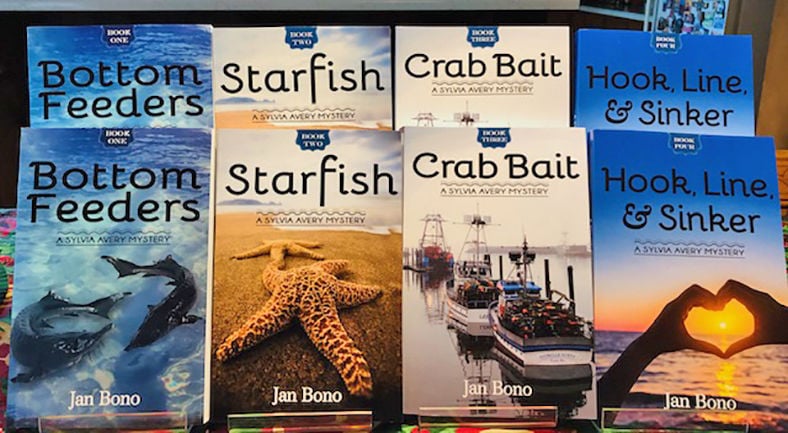 “Hook, Line, & Sinker” joins “Bottom Feeders,” “Starfish” and “Crab Bait,” and continues the mischief stirred up by the widows of the Peninsula’s geriatric belly-dancing troupe.

“In this book, the ladies of The Veiled Rainbow are looking for love by signing up on an online dating website,” said Bono. Then she laughed. “And yes, before you ask, I did extremely extensive research to ensure accuracy!”

Sylvia Avery, Bono’s main protagonist, has been recruited to help the ladies navigate the hoops, hurdles, and hustles of online dating, while Sheriff Donaldson is passing out pepper spray and warning them not to give these internet guys any money.

But when Sheriff D attempts to run background checks on the ladies’ dates, not many of them are using their real names. When he persists, he discovers that several of them have criminal records, and orders the ladies to “cease and desist” their dating adventures.

Naturally, none of the ladies choose to pay him any heed, and despite their best efforts to stay safe, several of the troupe unwittingly end up putting themselves at personal risk.

“But it’s a cozy mystery,” said Bono, “so there’s no graphic violence, no obscene language, and no explicit sex scenes.”

By definition, a cozy also has an amateur sleuth who works with the police department in a small town, a quirky cast of characters, and, at least in Bono’s case, a great deal of humor.

“My five proofreaders all told me that this book is more of a comedy with a side of mystery thrown in,” said Bono, “but there’s plenty of mystery when we try to figure out which of these guys is a good guy and which might be a suspect in a series of local crimes.”

As for the “small town” required in a cozy, Bono has used her 42 years on the Long Beach Peninsula to create a believable environment. So believable, that there’s a map on page five of each book that looks very, very familiar.

“I’ve changed the names of most towns, major landmarks, and businesses,” said Bono. “It’s still the Columbia River to the south and the Pacific Ocean to the west, but Astoria is once again going by the name of Fort George.”

Bono taught school for 30 years on the Long Beach Peninsula before she began her writing career in 2006, and the first thing she did was to create a “fictional” community in which her characters would live.

For the local history buffs, she decided to revert to Ilwaco’s original name, dating back to 1865. The town was called “Unity” for a brief time right after the Civil War ended, and so it is in Bono’s books.

“Long Beach was originally called Tinkerville, because the Tinker’s founded it,” said Bono. “Lolita Morris, who lived to be 102, and died in 2005, was a direct descendant. A lot of locals know that, so I call it Tinkerstown.”

By the conclusion of “Hook, Line, & Sinker,” Bono decided she needed to tie up a few loose ends and get the number of reoccurring characters down to a more manageable number.

“In each book,” said Bono, “I was adding more and more people. It became really hard to remember where all 19 of them were, and what they were doing, and how to balance their ‘screen time,’ as I call it.” Again, she laughed. “ It was time to resolve a few story lines so I could trim the active cast back before I start book number five.”

Bono paused reflectively, then decided to share an insider’s decision. “I fell in love with a couple characters who were supposed to be gone by now, but at the last minute, I found ways to keep them around.” Her eyes twinkled. “They may not have big parts in the next book, but I’m sure we’ll be hearing from them again.”

The Sylvia Avery Mystery Series was originally planned to be eight books, but now Bono is not so sure. “It could end up being five, or six, or seven,” she said. “I’m still having fun, I’ve still got strong ideas for the next few books, but as soon as Sylvia decides which guy will be her main squeeze, I think it will be time to wrap it up.”

Fans of the series hope there are many more books to come, and are delighted book four will be available on Saturday, June 8, from 10 a.m. to 1 p.m. at Olde Towne Coffee Café, 108 1st Ave North in Ilwaco.