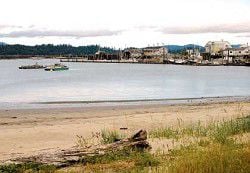 <i>photos By KEVIN HEIMBIGNER</I><BR>Morehead Park beach overlooks the Port of Peninsula, canneries, and Willapa Bay. It's a perfect place to watch the oysterboats come and go. 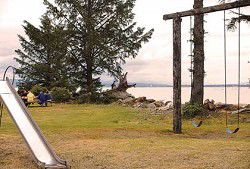 <i>photos By KEVIN HEIMBIGNER</I><BR>Morehead Park beach overlooks the Port of Peninsula, canneries, and Willapa Bay. It's a perfect place to watch the oysterboats come and go.

NAHCOTTA and CHINOOK - South Pacific County is home to two of the most picturesque county parks to be found anywhere in the U.S. and they have both been spruced up for use this summer.

County Engineer and Director of Public Works Don Larson says, "We have limbed trees, cleaned up brush, repaired the sea wall, and brought in a new restroom at Chinook and we are ready for the public to enjoy the park."

He says of Morehead Park, "The wind storm last winter caused some damage, but we've cleared trees and cleaned up the park. We try to maintain the parks the best we can with the funds available so that they are usable for the public." Both Chinook and Morehead are day-use only parks.

Chinook County Park, located at the eastern edge of the town of Chinook, features spectacular views of the Columbia River, Cape Disappointment, Saddle Mountain and Astoria. The park has playground equipment for youngsters of all ages, several picnic tables near the river, and plenty of grass fields for a game of touch football or a game of catch.

The new restroom is the proverbial brick outhouse as it is made from molded concrete and has stainless steel fixtures. There is a new drain field and the restroom facility is wheelchair accessible. "The one piece, pre-cast restroom came in on a flat bed truck from Spokane," Larson explains. The Port of Chinook has taken responsibility for maintaining the park with the generous help of volunteer caretakers.

Morehead Park borders to the north the Port of Peninsula in Nahcotta. From the sandy beach one can see Long Island, Willapa Bay, the oyster dredges at the port and the canneries to the south.

"The local 4-H Club takes care of Morehead Park and they still host camps there for kids," Larson says. There are several cottages for campers, a cookhouse, places for counselors to stay, an open fire pit surrounded by new benches, and open areas for recreation. The flag pole stands in a central location.

Morehead Park has been hosting camps for over half a century. Chinook resident Eileen Wirkkala relates, "I remember camping at Morehead as a little girl in the mid-50s when I was a Girl Scout. I lived in Ilwaco at the time and Nahcotta was a long ways away. We even got mail from the Nahcotta Post Office - there were no cell phones back then."

Wirkkala talks of washing dishes at the end of the cookhouse, riding horses in the field to the north, playing on an old boat that had "run amuck" on the beach, and beginning each day of camp with the flag salute.

"We worked on earning our badges, did activities like basket weaving, and competed to see who had the best campsite," she reminisces. "We did simple things, but they were fun and we had a wonderful time. I'm sure kids today still enjoy that kind of thing."

Wirkkala was on the Chinook County Park Committee that created a plan for the park, thanks in part to citizen input.

"I remember when I was young we would see all the salmon fishermen camping alongside the road and Chinook had a salmon derby for all the fishermen who would go out in the river in their small boats. There was a tent city," she laughs. "It is nice to see that Chinook Park is being fixed up."

The county parks are open from dawn to dusk from May through October, with exact opening and closing dates dependent upon the weather. Bruceport and Bay Center also have parks in Pacific County.

From screen to stage! 10 movies that became Broadway musicals

'Nobody has better respect for intelligence than Donald Trump." Can you believe the former President said THAT?