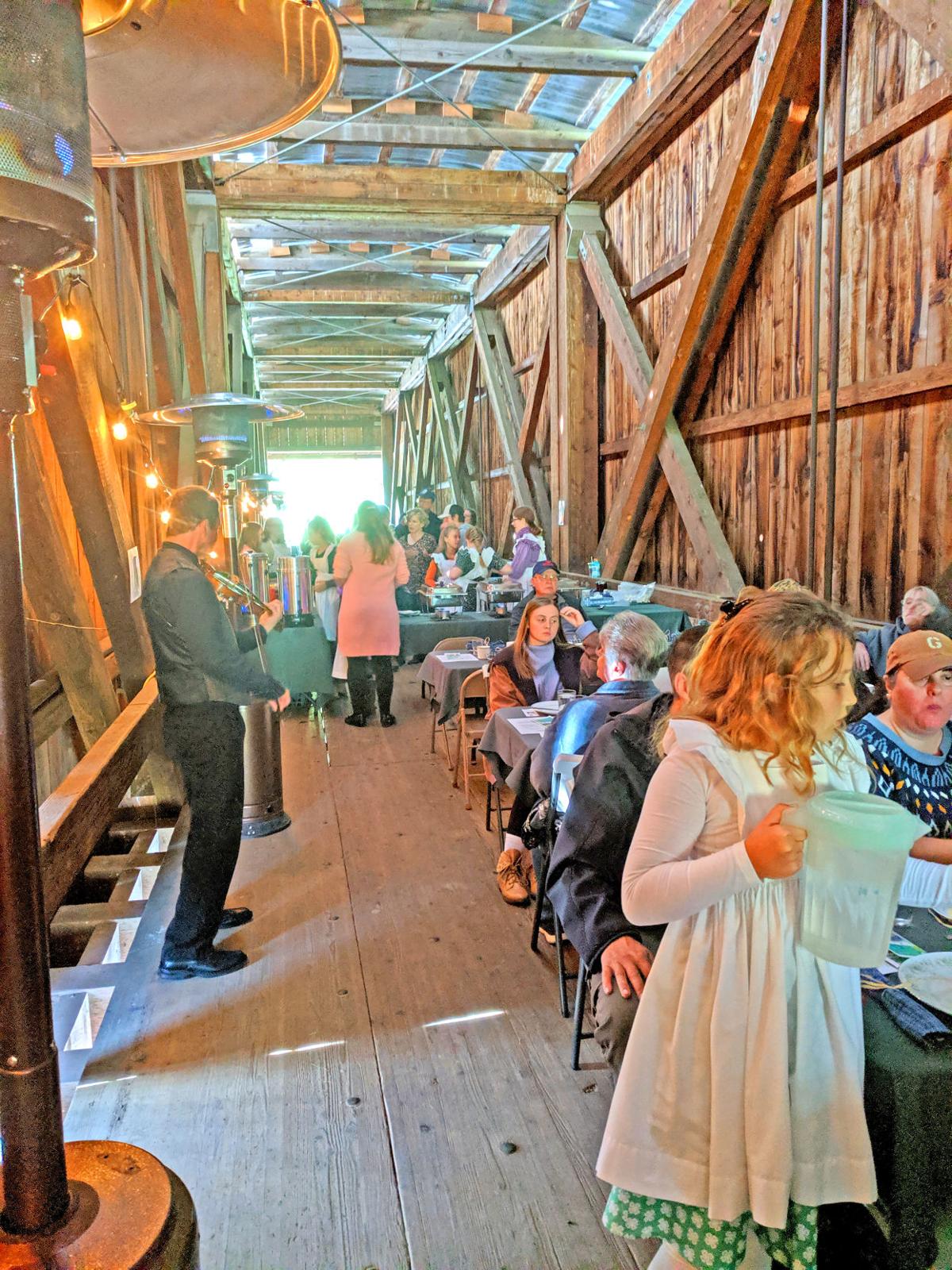 Grays River Covered Bridge in Western Wahkiakum County serves as a civic dining room once a year as the venue for a 4-H fundraising dinner. 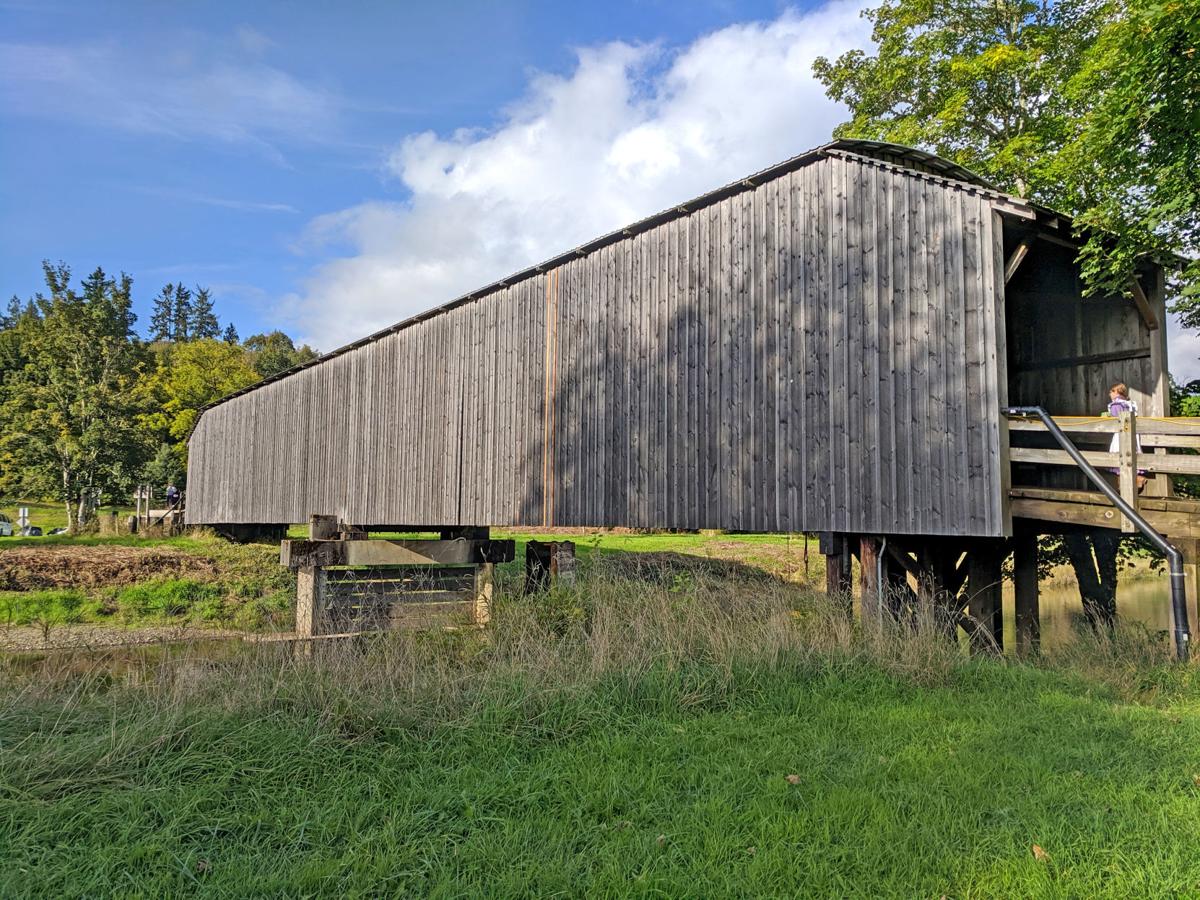 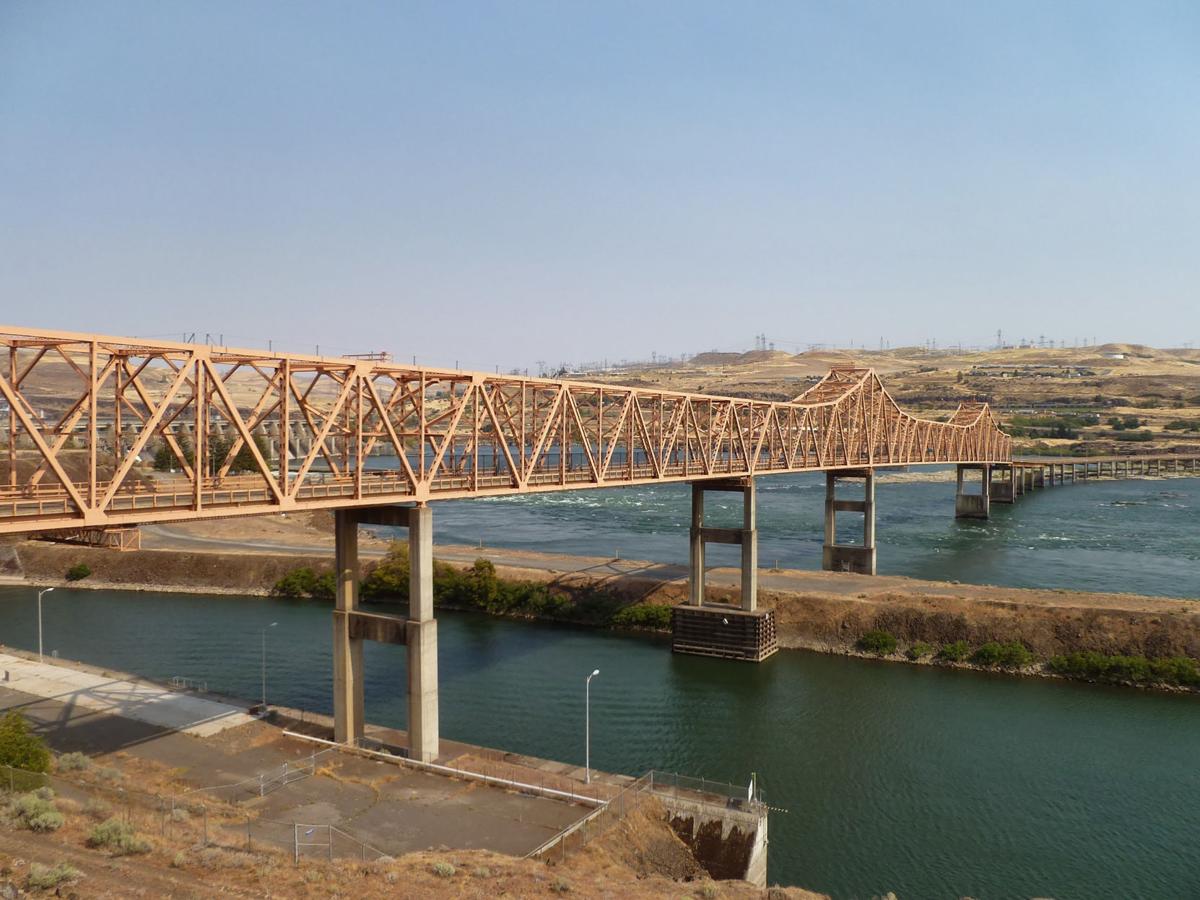 The Dalles Bridge is a feat of 20th century engineering east of the Columbia River Gorge. 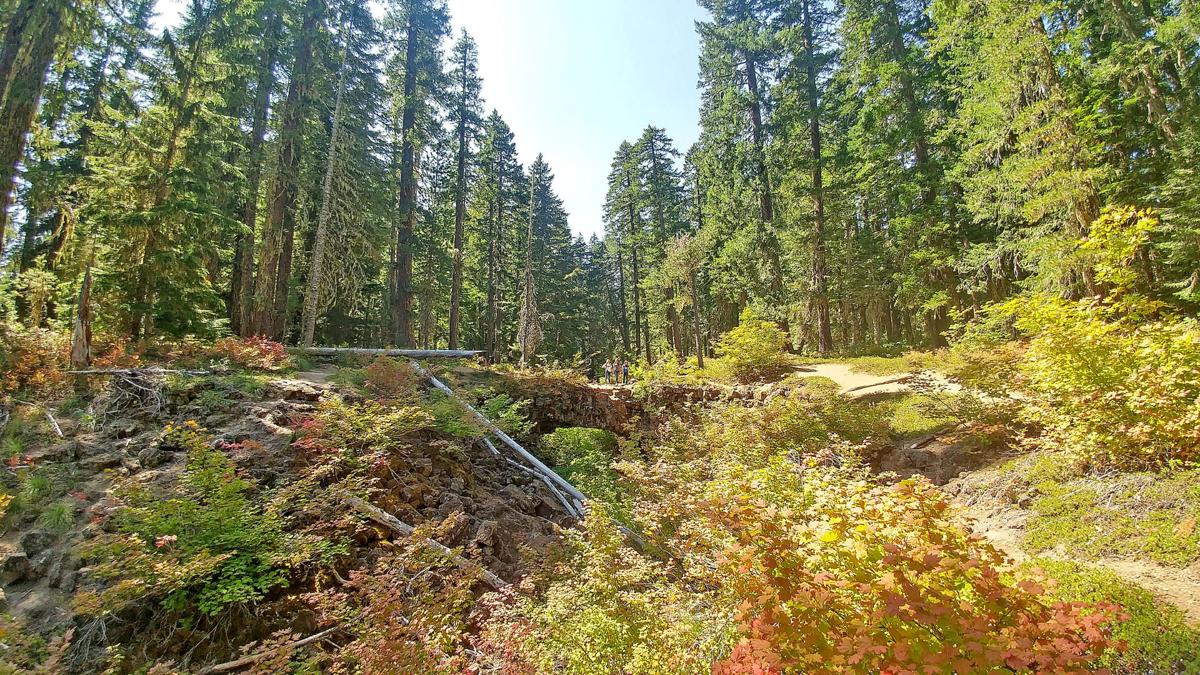 A natural bridge formed when a ancient lava tube collapsed near Mt Adams. 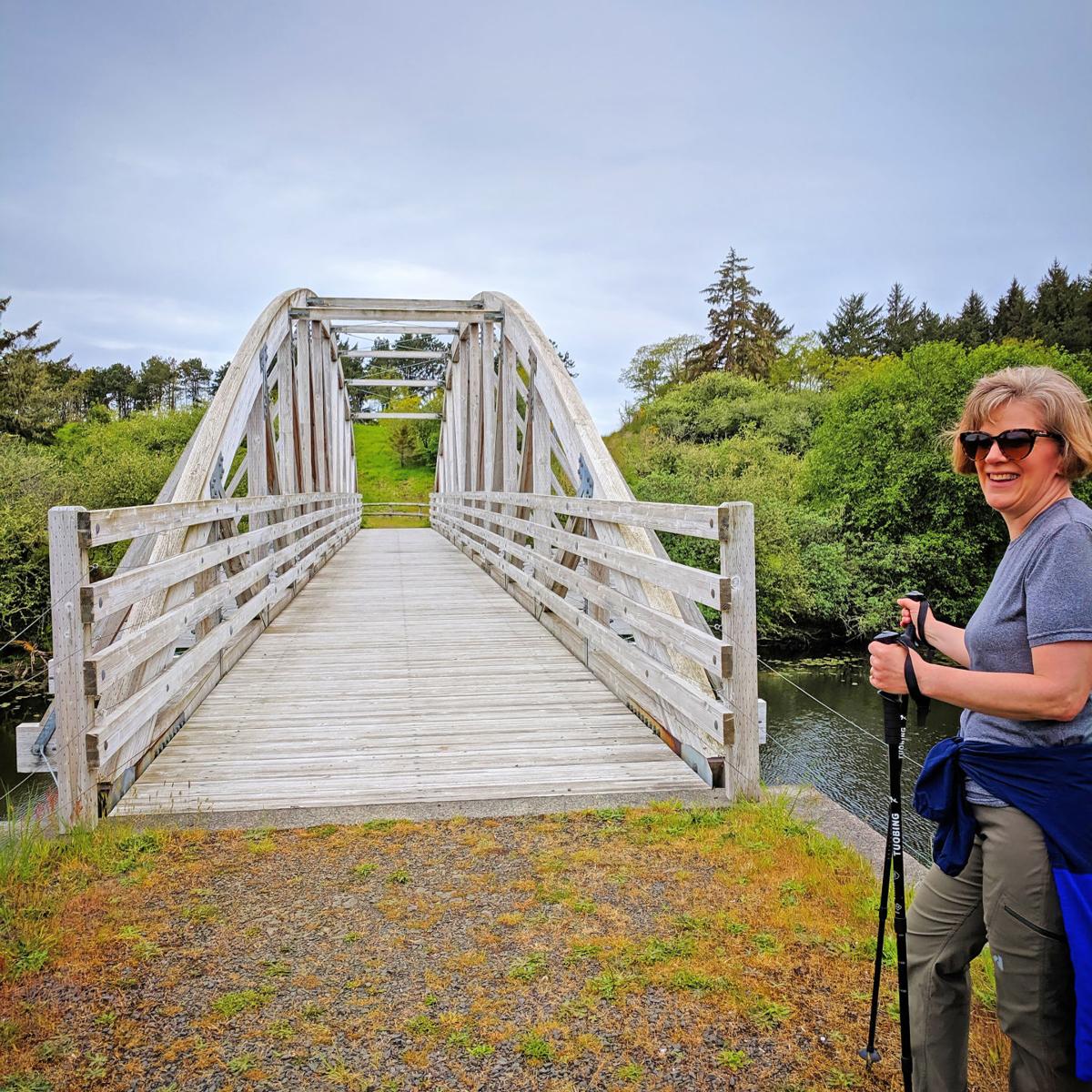 Amy Hunt pauses by a hiking bridge across the Skipanon River.

With an expensive accommodation for passing ship traffic, the Astoria-Megler Bridge’s picturesque southern high rise has become a leading symbol of our region since it was finished in the 1960s. Cannery Pier Hotel adds a splash of color.

We take many things for granted in our daily lives here along the rivers and bays where the Columbia River meets the vast Pacific.

None more so than the practical magic of the bridge.

A long, long time ago, a man or woman following a hunting trail came across a stream flooded after a spring snow melt. Crossing the stream would mean getting wet and it was already chill and night falling soon. They shuddered at the thought of the wet, of struggling against the currents that might dash them against the rocks, or wash away their spare and valuable handmade tools. They spied a tree that had fallen across the stream — the root-wad on the near bank, the crown of the tree disappearing into the forest on the other side.

I get a thrill on a hiking trail when some wood structure deep in the forest carries me across the creek. I study it and wonder at the work that must have gone into transporting its materials miles into the woods — assembled just to await the passage of my hiking boots.

In between, the trunk of the mighty tree connected one side to the other — high and dry above the raging waters. They saw a way to make their path safer and better.

The bridge was born.

In time, the natural bridges like this would be replaced by humans creating their own — crude tools felling a tree or dragging logs and piling rocks and earth to make a crossing when no natural bridge was available. It is unlikely that the bridge was man’s first invention, but it may have been the first that involved creating something so long lasting, practical and significant.

There is a bridge still standing that dates to 860 BC, that was crossed by the likes of Homer and St. Paul, that still carried the daily vehicle traffic of commerce and civilization until it was closed to cars and trucks in 2006. You can walk or ride your bicycle across it today

Trial and error, math and geometry — from the strong back of the perfect arch to the sinews of steel cable — bridge design advances on the cutting edge of our practical knowledge while proven designs endure. The Astoria-Megler Bridge is the longest continuous through truss bridge in North America — yet its riveted steel girder triangles look little different from bridges generations older.

It is the invention that first tied the world together.

Bridges fascinate me not so much in their structure, but in the human cooperation necessary for their genesis. In the ancient world, bridges were built for commerce — like the stone caravan bridge in Turkey — as well as to conquer — Roman legions marched with engineers that erected bridges as they advanced across the Western world. A ferry or a ford is a bottleneck for cultural interaction — a limitation on human travel that perpetuates isolation. A bridge allows a free flow of movement that can melt this isolation.

You don’t need to venture to ancient world to see an example of this. Think about the dozen bridges that cross the Lower Columbia River connecting Washington and Oregon. These two states have had very different cultures since their inception, different ideas of taxes and tolls and cooperative planning — not to mention competing economies.

That these two states were able time and time again to bridge the river between them speaks to how an overarching practical necessity for connection can build a cathedral to cooperation.

That is how I see bridges after all.

The striking thing about cathedrals is how they spanned generations in their making — that the craftsman who laid the first stone, or the architect that designed it never lived to see its completion. Aside from their religious significance, they are monuments to inter-generational cooperation.

While bridges take far less time to construct, they rarely appear overnight. The Astoria-Megler Bridge took more than 40 years from conception to ribbon cutting. The Brooklyn Bridge was designed by John Roebling but chief engineering duties were passed on to his son, Washington, after he was felled by tetanus. Washington was incapacitated by injuries suffered during construction, so Washington’s wife — Emily Roebling — became chief engineer, serving both as on-site project manager and political liaison to see the massive project through.

First conceived in 1800 — it wasn’t completed until 1883 because the East River’s busy ship traffic required a span high enough to allow a constant stream of world commerce to pass beneath. So too does our four-mile-long span of the Astoria-Megler Bridge arch its back 197 feet off the water to allow the endless movement of world trade to glide under its girders. Imagine the problem given to its engineers — design this bridge to be high enough that ships can pass under it — not just the modern cargo ships of 1964 — but all the ships of the future as well.

I have talked with people who remember what it was like before these bridges we take for granted, who remember the wooden truss bridges, the swing bridges and draw bridges that would daily bring travel to a halt to allow water traffic to pass. I have talked with those who remember when the ferries were replaced by the Astoria-Megler Bridge and I myself have seen the way the removal of the toll across that bridge changed patterns of commerce and commuting in the region.

I love to run the Columbia Crossing each year — to take my time appreciating the marvel of the Astoria bridge. So too, do I love the Grays River Covered Bridge dinner — an annual 4-H fundraiser that transforms the last covered bridge over a public road in Washington into a rustic celebration of local talent and bounty.

I love stopping at the top of nameless practical bridges on my daily runs or motorcycle rides around the valley.

I get a thrill on a hiking trail when some wood structure deep in the forest carries me across the creek. I study it and wonder at the work that must have gone into transporting its materials miles into the woods — assembled just to await the passage of my hiking boots.

It is hard to build a bridge single handed.

I know first hand. A few years ago I worked to build a sturdy bridge across the seasonal creek behind my house — something strong enough to ride a horse across. Even though the creek I needed to cross was only 5 feet deep and 8 feet wide, it was hard to work the heavy railroad ties into place. Hard to make it solid and level while jumping from one side to the other. Building such a simple span over such a shallow creek gave me renewed respect for bridges I cross everyday — that make my life here possible.

By necessity then, bridges are monuments to human cooperation and belief in future and practical investing in progress.

Those are things worth celebrating, worth wondering at, worth appreciating the next time you cross a bridge.

By now, you are likely used to me musing about the magical human investment evidenced in inanimate objects on our landscape. I take no shame in that. The silent world our eyes behold speak volumes if we stop ourselves long enough to listen.

Ed Hunt is a writer and registered nurse as well as the author of “The Huckleberry Hajj,” a collection of essays available on Amazon.com. He lives in Grays River.