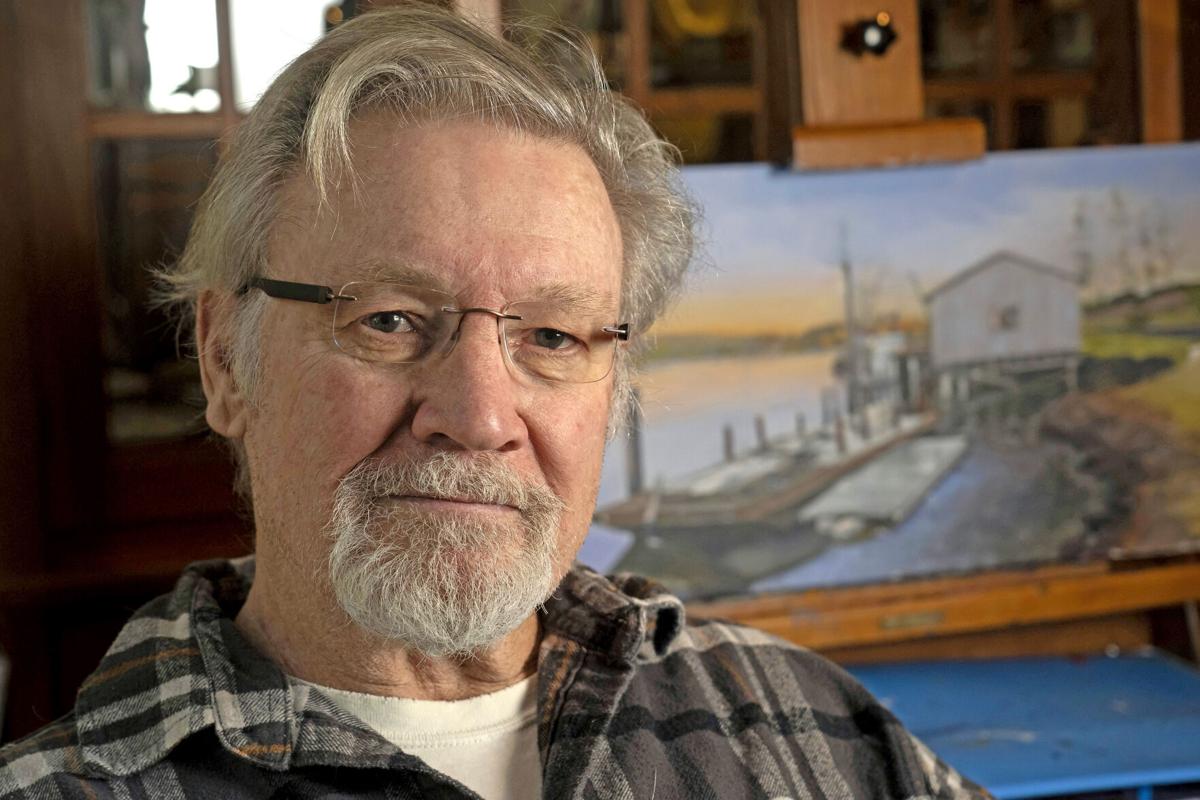 Bay Center artist Ron Pulliam paused in the midst of painting on Dec. 19, 2020. 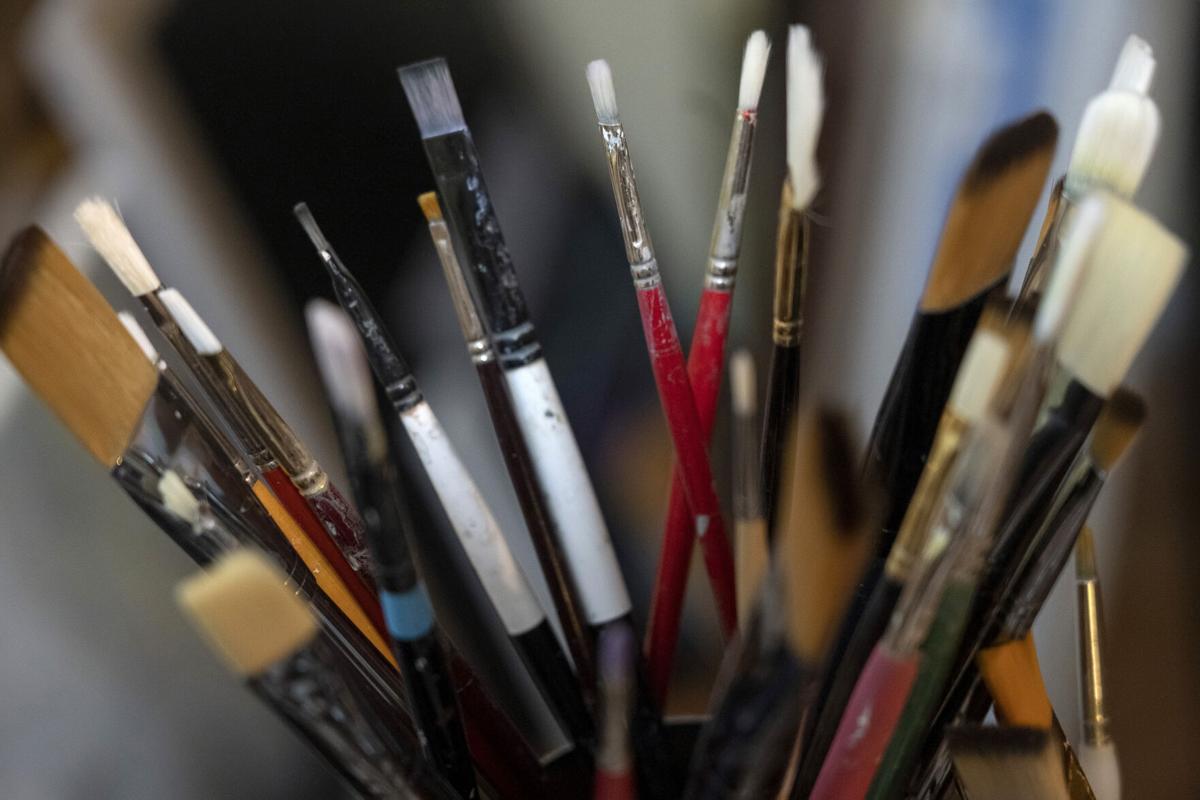 The Niawiakum River at low tide, also acrylic on canvas. The river and the Palix are among Pulliam’s choices for scenic pictures. 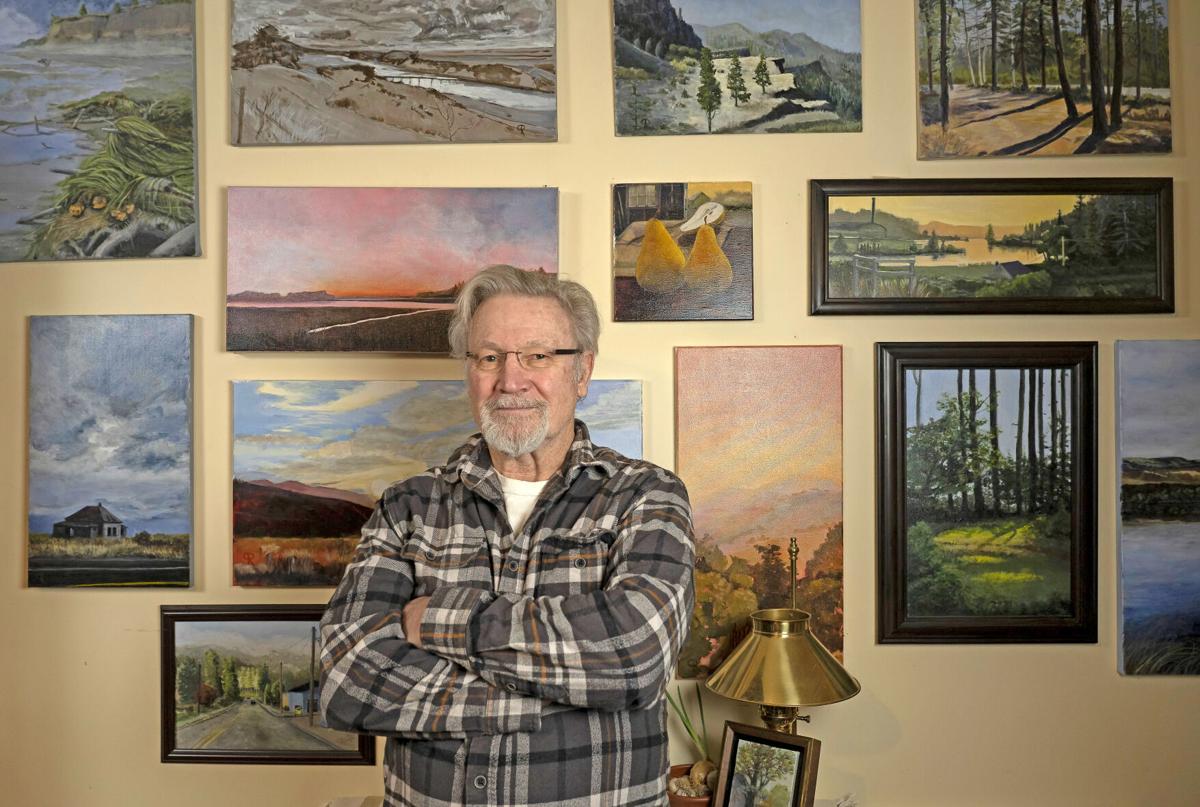 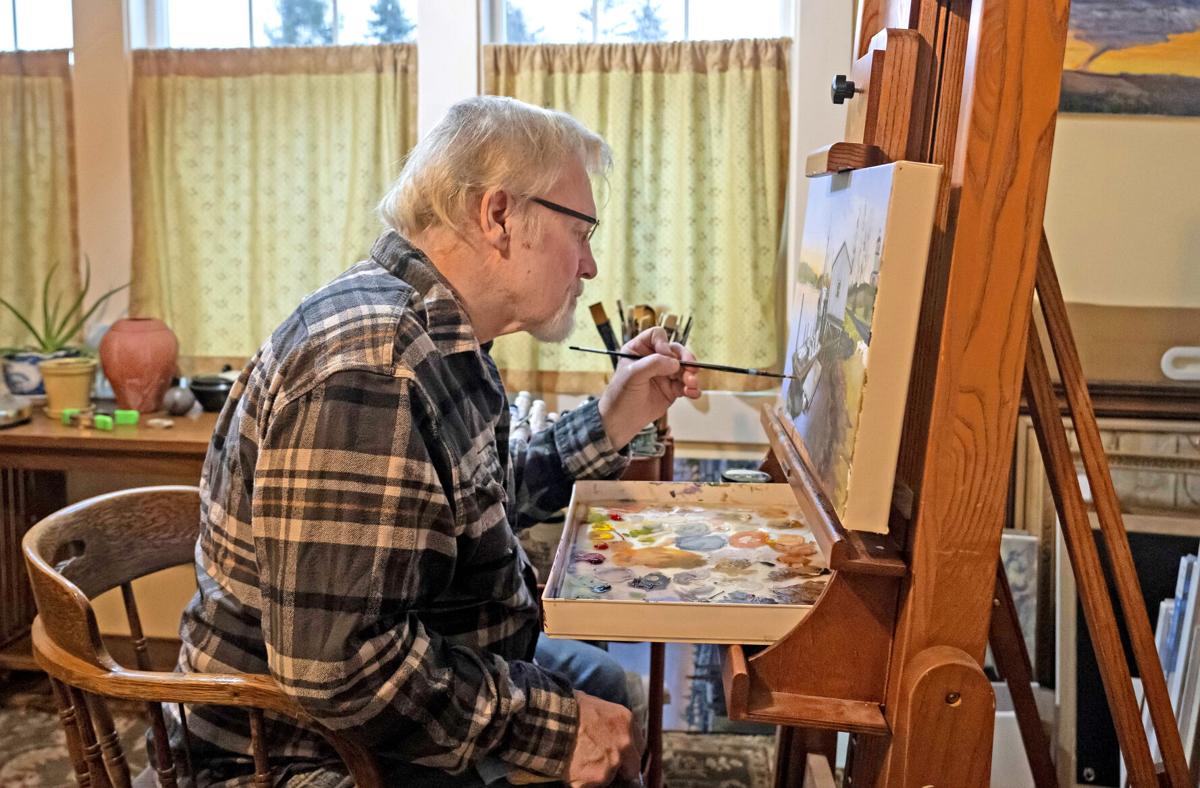 At 73, Bay Center artist Ron Pulliam is pursuing an old passion for painting in cozy surroundings above Willapa Bay.

This scene shows the landmark Rose Ranch in northern Pacific County. “Most people take their pictures from the highway side. I like this one,” Ron Pulliam noted. 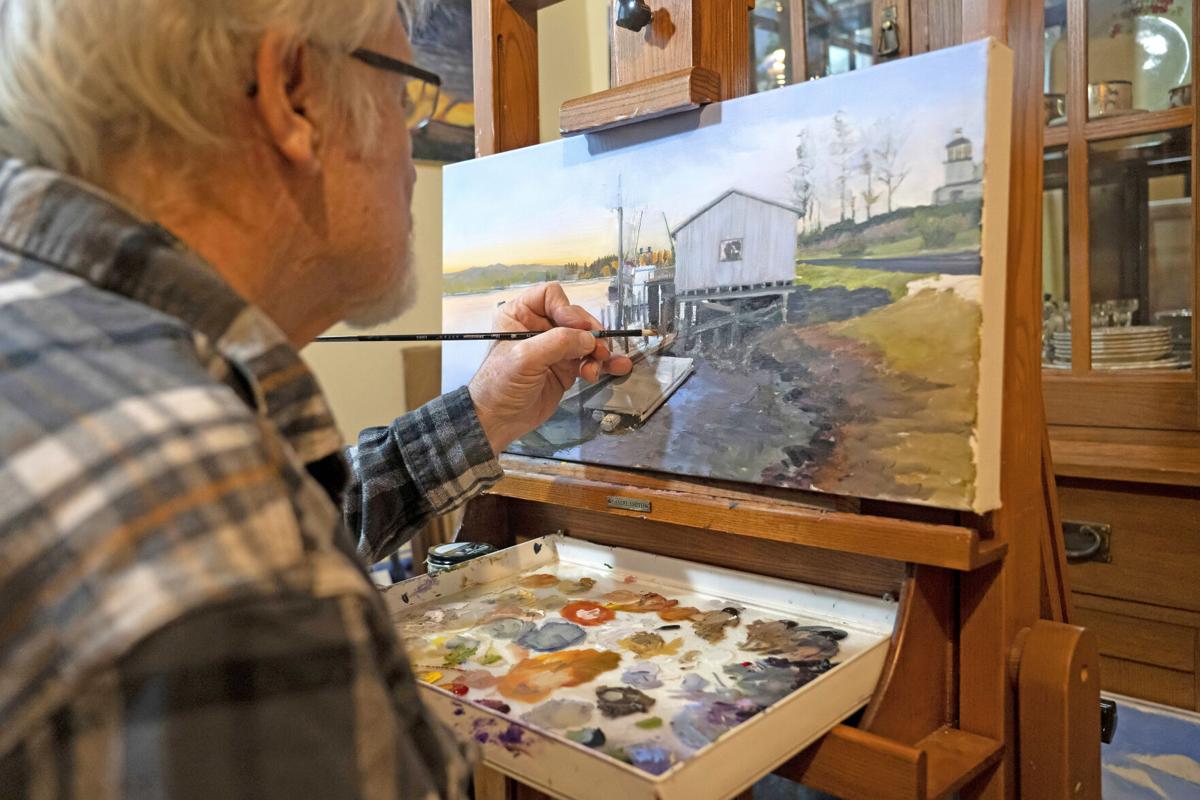 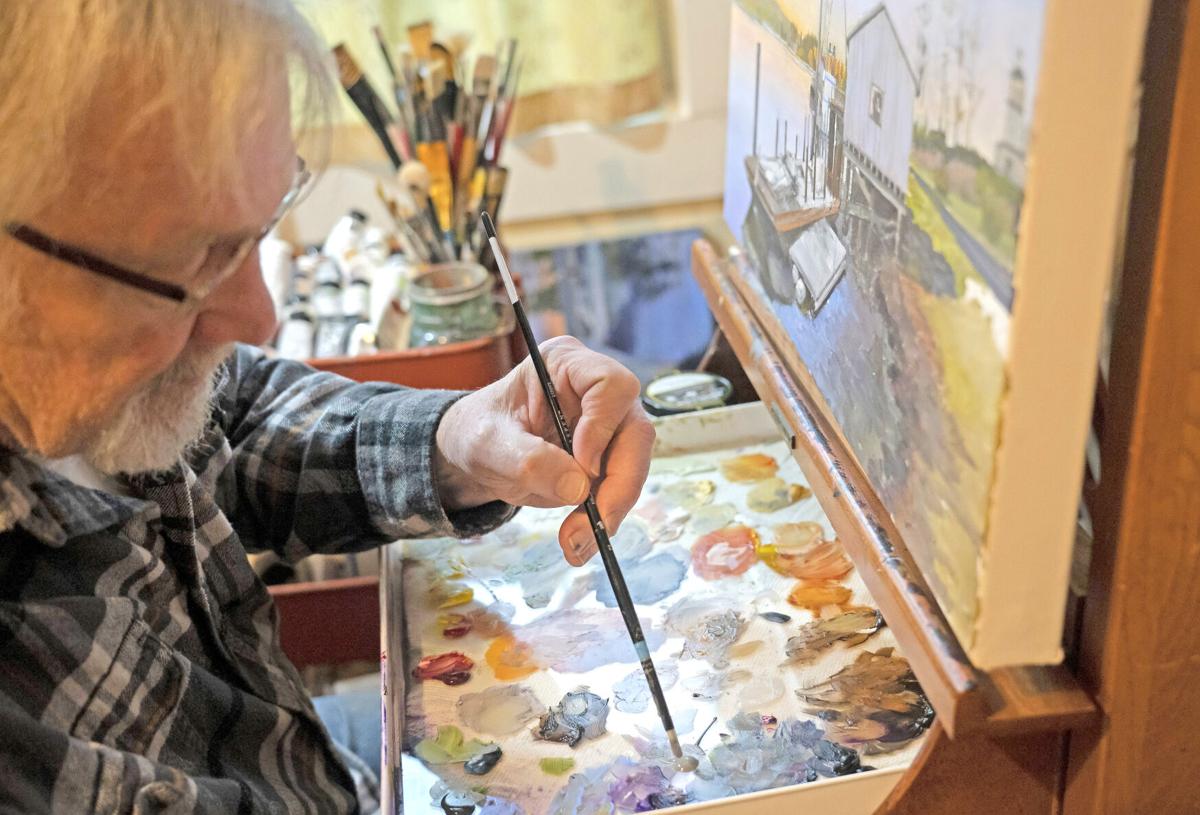 Ron Pulliam works on his latest painting, this one of an oyster industry building near Willapa Bay. 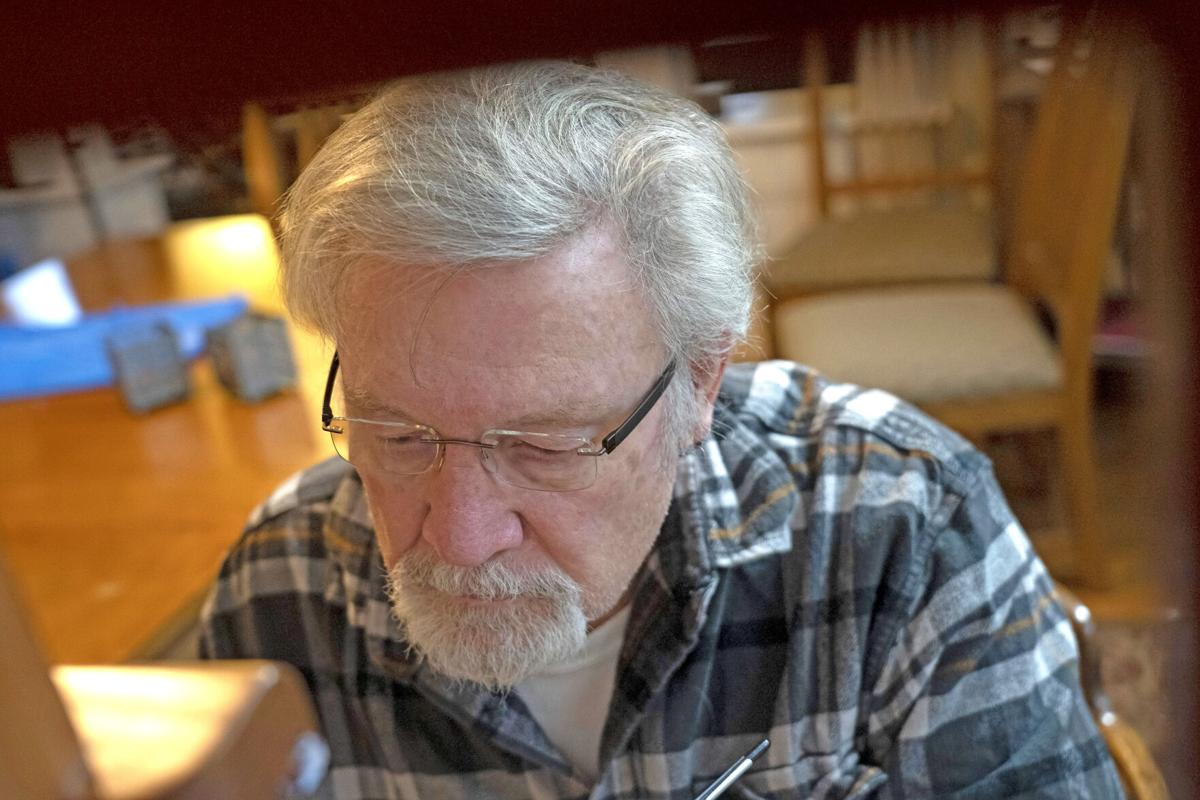 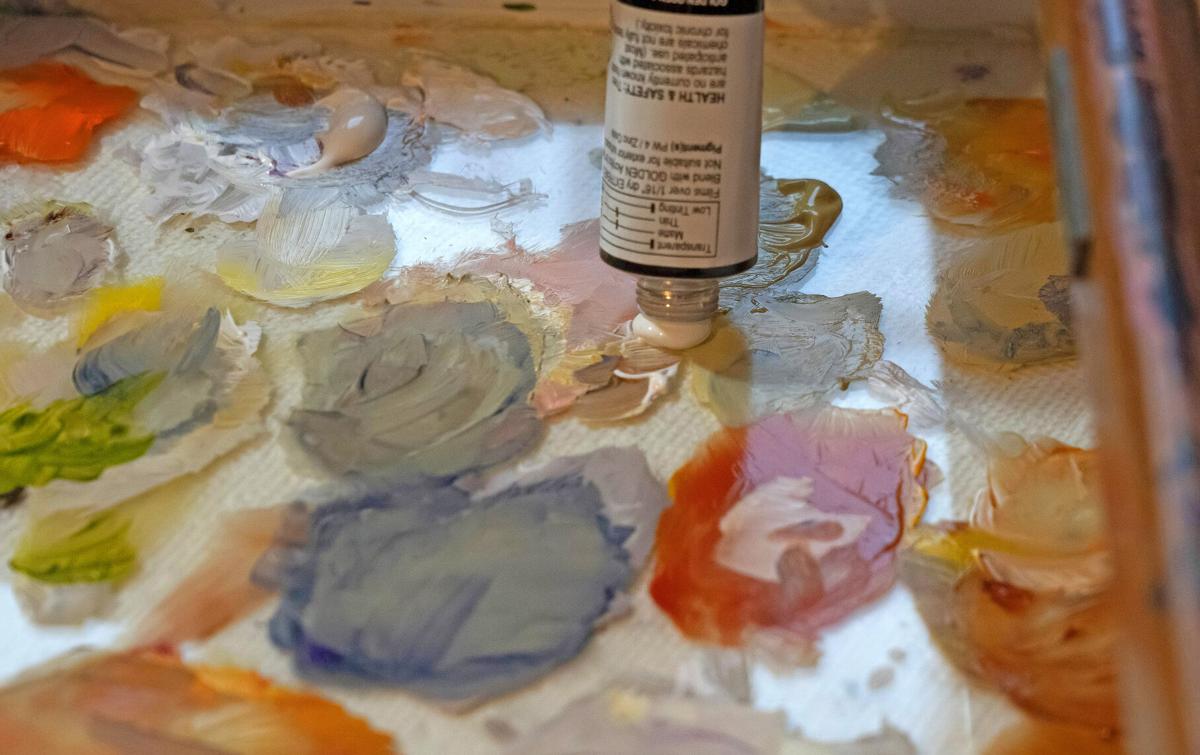 His pallette reflects some of Ron Pulliam’s taste in colors.

The Weyerhaeuser Mill at Raymond, painted in acrylic on canvas and shown in a temporary frame, was one of Pulliam’s earlier pictures. 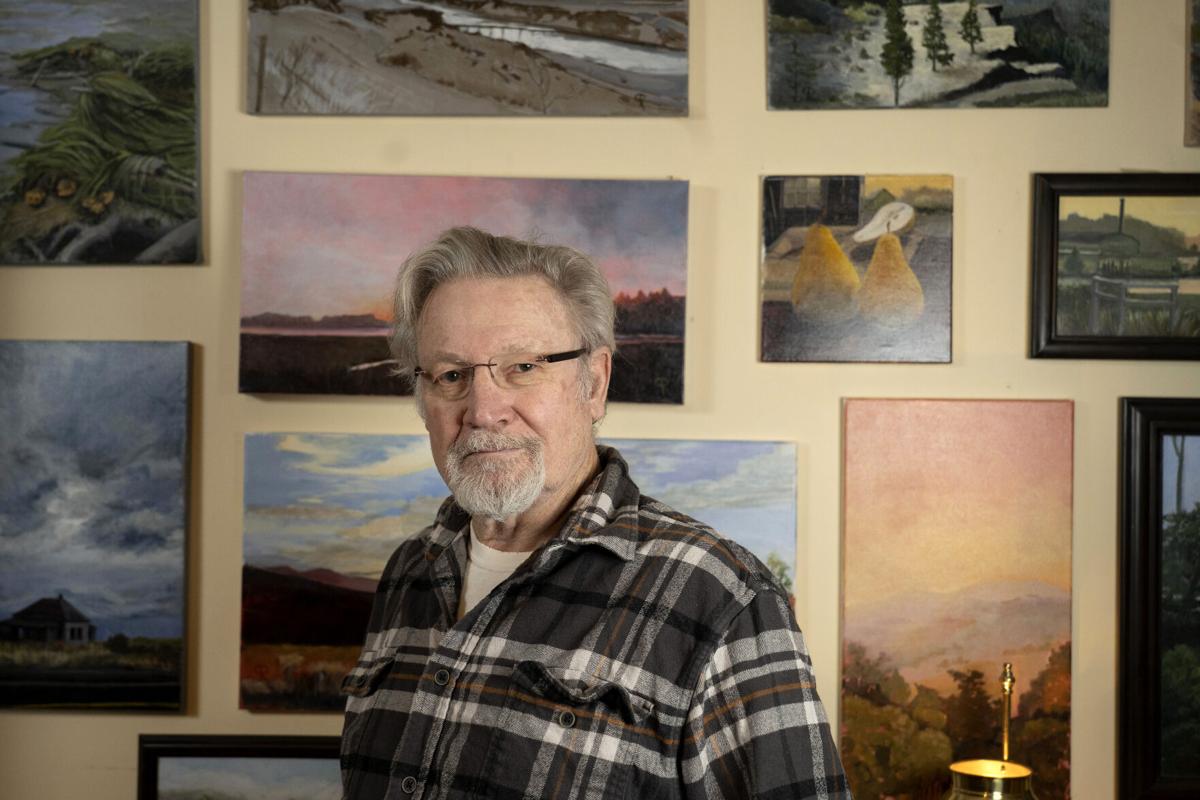 This painting of the highway curving into Bay Center elicited positive comments from online viewers. “This makes me feel like I’m actually driving down that road,” wrote Mary Edwards.

Bay Center artist Ron Pulliam paused in the midst of painting on Dec. 19, 2020.

The Niawiakum River at low tide, also acrylic on canvas. The river and the Palix are among Pulliam’s choices for scenic pictures.

At 73, Bay Center artist Ron Pulliam is pursuing an old passion for painting in cozy surroundings above Willapa Bay.

BAY CENTER — Is painting like riding a bicycle — once learned, you never forget?

Where to view online

Perhaps. Ron Pulliam put down his brushes almost half a century ago.

He posts his finished art — and sometimes works in progress — on his own Facebook page or on the Bay Center Remembered site.

Positive comments from residents spur him to create more.

“I paint for pleasure for sure, but it’s not all pleasure. Sometimes it causes temporary grief, but I get a lot of satisfaction from it,” he said, when asked to sum up why he does it.

‘Nothing else exists except the canvas, the colors and my brush.’

“Nothing else exists except the canvas, the colors and my brush.

It’s like I am in a vacuum or maybe an hour in a warm pool.

Pulliam is married to Jane Pulliam, a member of the Chinook Tribal Council. They split their time between their home in Tacoma, where he has a tiny basement studio, and an older property in Bay Center. “We love it there, the town and the people.” They bought the North Pacific County home, which they are restoring, 13 years ago; there his painting is confined to a corner of their dining room.

One facet of his creative talent has been on hold for almost 50 years.

Pulliam grew up in Ohio and attended Kent State University in 1968. He was drafted into the U.S. Army and served a tour in Vietnam as a surveyor and photographer. “It was a period of prolonged, unrelenting stress and threat,” he shared.

He returned changed, and wasn’t keen on resuming his early artistic endeavors. “I painted now and then, but had to go looking for my brushes,” he said. “It was a long period in between paintings.”

In the years that followed, Pulliam had a 32-year career as a graphic designer, including running his own business.

Now retired, he is rediscovering his talents, gaining a considerable local fan base, while remaining cautious about expanding into too much marketing. Years back, he used to turn wooden bowls with considerable skill, but extending art into commerce killed the hobby. “They were more artistic than functional, but because I started thinking about selling, going to arts fairs, I lost interest at that point.”

Pulliam teases that he is a “recovering perfectionist.” Some years ago, he immersed himself in elements of Japanese culture. He spent seven years honing his skills in the aikido martial art, nurtured trees in the bonsai style and bred koi fish. He was fascinated by the Japanese trait of exactitude, which extends to perfecting the rear surfaces of a fence which is hidden from view.

He is reflective looking back at that phase. “I didn’t want to be reminded that I had lost an opportunity by not going back to painting,” he said.

The breakthrough moment came after he and Jane were stimulated by Landmark Education personal coaching classes in Portland. “It challenged my way of thinking,” he said.

Around that time, he connected with artist Lori Beth Chandler who invited him to her Seattle studio. Together they dumped acrylic paint on 4-by-5-foot pieces of heavy canvas in an exercise in process, “without thought toward design or results.”

“We squeezed, we splashed, we splotched the paint all over,” he recalled with a laugh. “It was kind of cool. Looking back, that was part of the break in my way of thinking.”

Once he took out his brushes, his own skills surprised him. “I was flabbergasted by my first paintings,” he recalled, noting he was way better than in his youth. “I said, ‘Dang, I can do this!’ I was fully prepared for a lot of failure — you have to be. You have to be prepare to do a lot of crappy things. It’s a skill and it takes practice and work. It usually takes years.”

He painted the Weyerhaeuser mill and its Raymond waterfront setting and a street scene showing the town’s Park Avenue. As he toyed with choosing a consistent style for his preferred artist’s signature, he painted his initials as if they were chalked on the sidewalk.

From those early works, rural landscapes have dominated.

“The area comprising Raymond, South Bend and Bay Center is the source for many of my paintings. There’s no end of subject matter and weather to work with,” he said.

On journeys between their Tacoma and Bay Center homes, he scouts scenic views. “My wife drives the last 50 miles. I sit with my phone and and take pictures out of the window. Sometimes I get her to stop the car.”

From these, plus photos he takes on walks around their Bay Center neighborhood, he chooses his subjects and angles. “I see a sunset. I look for composition, contrast and color, and take pictures then review them. I go over 10, 15, 20 and find the one.”

The Palix River Delta and various views of the Niawiakum River at the mouth and at low tide drew favorable compliments when shared on his Facebook links. With the Palix scene, which almost glows with pinks and light blues, he first painted the entire canvas a pinky orange. “It helps me be freer with color.”

“Of all the work you’ve shared, this one is my favorite. The colors really are lovely,” wrote Lilli Cuevas.

A sweeping view of the highway curving toward Bay Center was almost photographic. “Oh, this makes me feel like I’m actually driving down that road. Great job, Ron,” wrote Mary Edwards.

Another, of the landmark Rose Ranch, was intentionally from an unusual angle. “Most people take their pictures from the highway side. I like this one.”

His progress still amazes him, as he shares online. “Some days I’ll walk into the studio, and stop dead and think, ‘Did I paint that last night?’ It’s a weird feeling.”

But Pulliam is down-to-Earth, too. He shuns watercolors or oils, preferring the more forgiving medium of acrylic paint. “I am still learning, I learn from just about every painting I do. I have ‘happy accidents’ — most mistakes that can be corrected.”

If not happy with a perspective, color or other elements, he takes a break. “If I get to that part where it is as much as I can do, I set it down and pick it up later when I can see what it needs.

“That happens when I think, ‘This is good enough’ or if somebody says, ‘Put down your brush and step away from the painting.’ There is a danger of overworking.”

Occasionally Pulliam selects unexpected topics for variety and fun. One was of pop icon Freddie Mercury, originally seen in a black and white photo but painted in color to resemble stage lighting. Another was a set of four still lifes of pears which he posted online seeking votes; just about every respondent agreed with his own favorite.

But at 73, he is in no rush to cash in on his revived talents. His pleasure comes from others enjoying his work. “I don’t want it to become a business; it’s a love,” he said.

“I want something that generates emotions in a person at first glance or else something they can identify with.”

Masti-Denise Mayrand is among those captivated. “Your painting is so good for the soul,” she posted.

Dr. Fauci: Getting vaccine doesn't mean you have free pass to travel