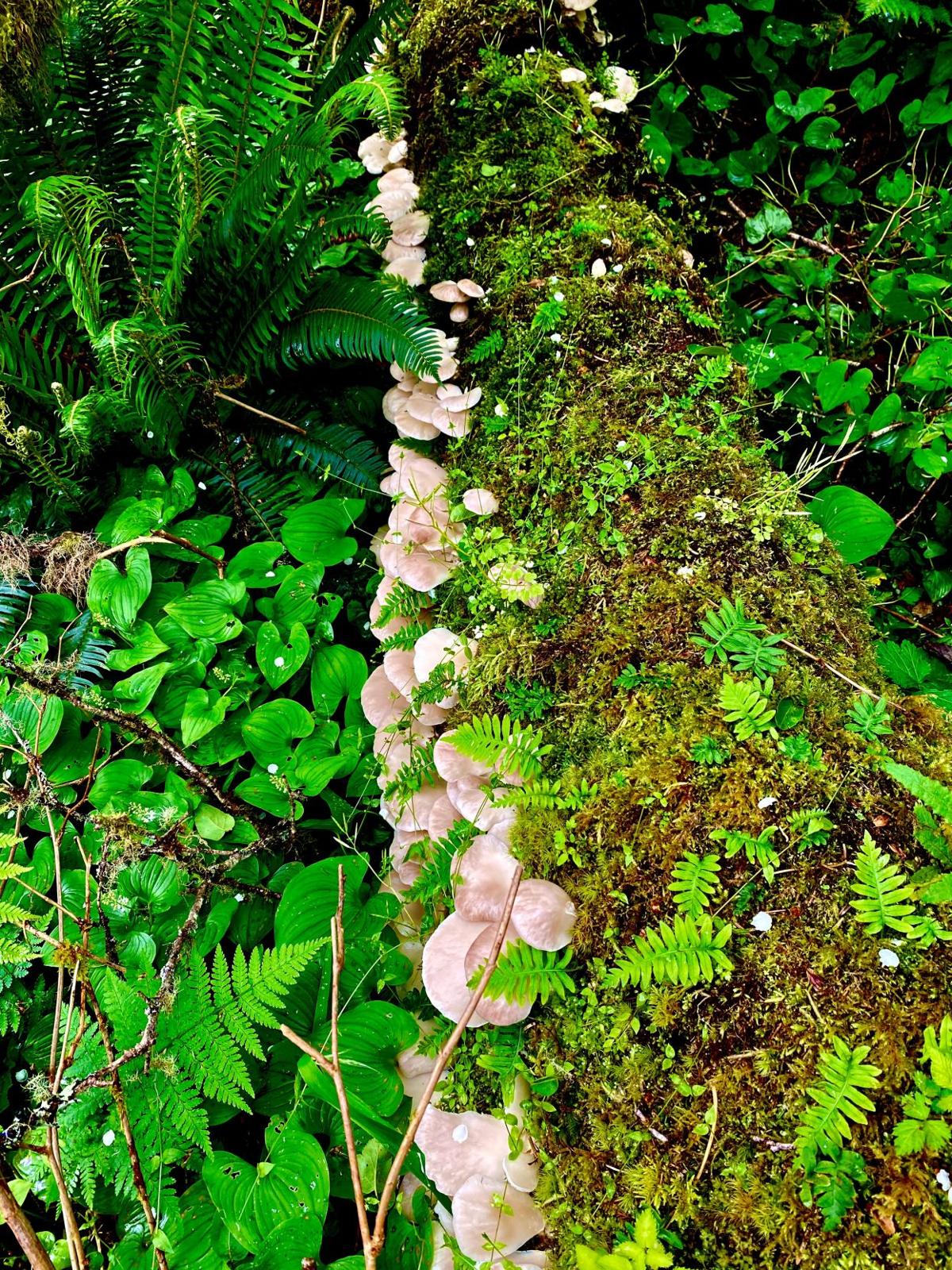 A row of wild oyster mushrooms. 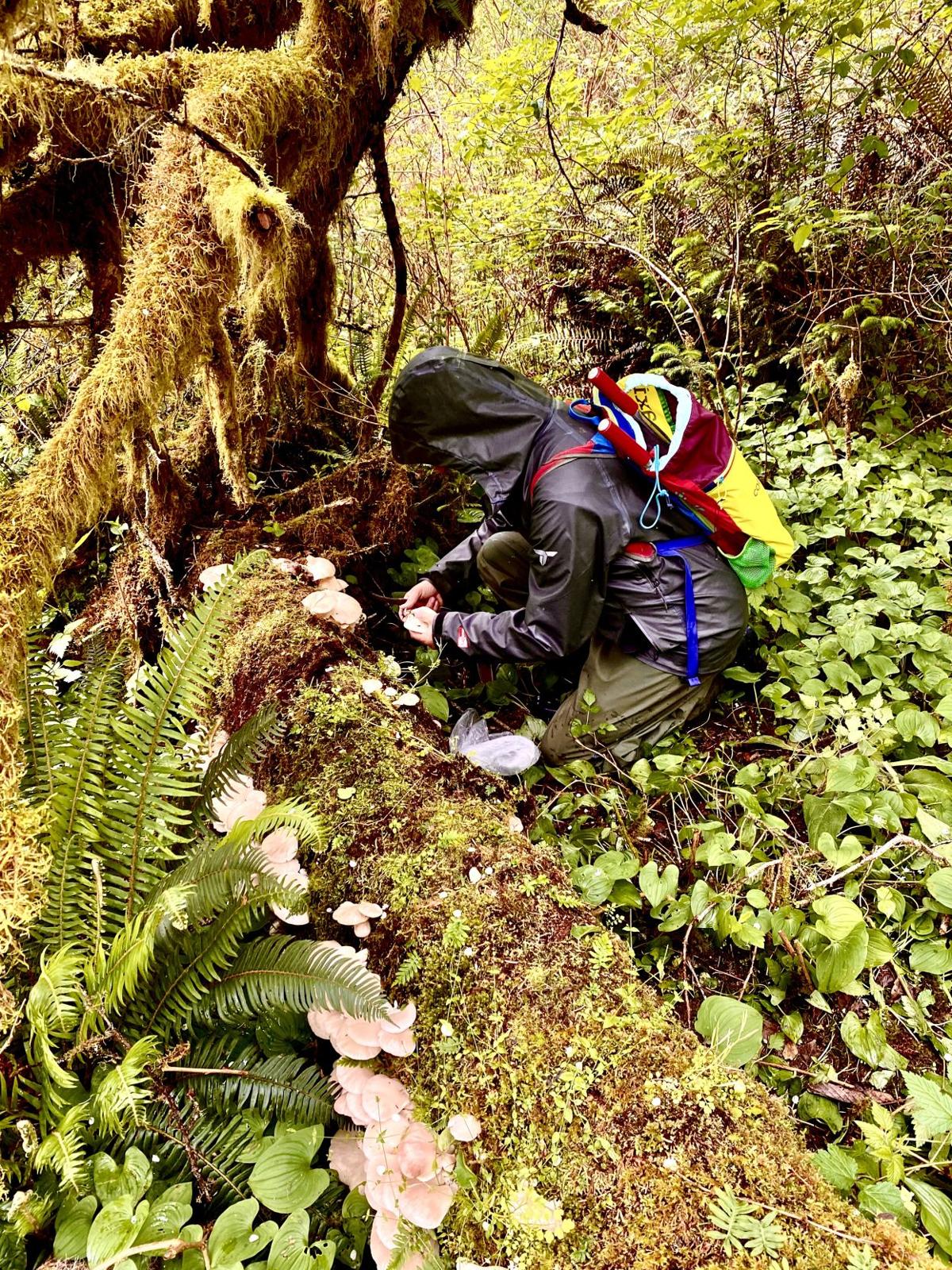 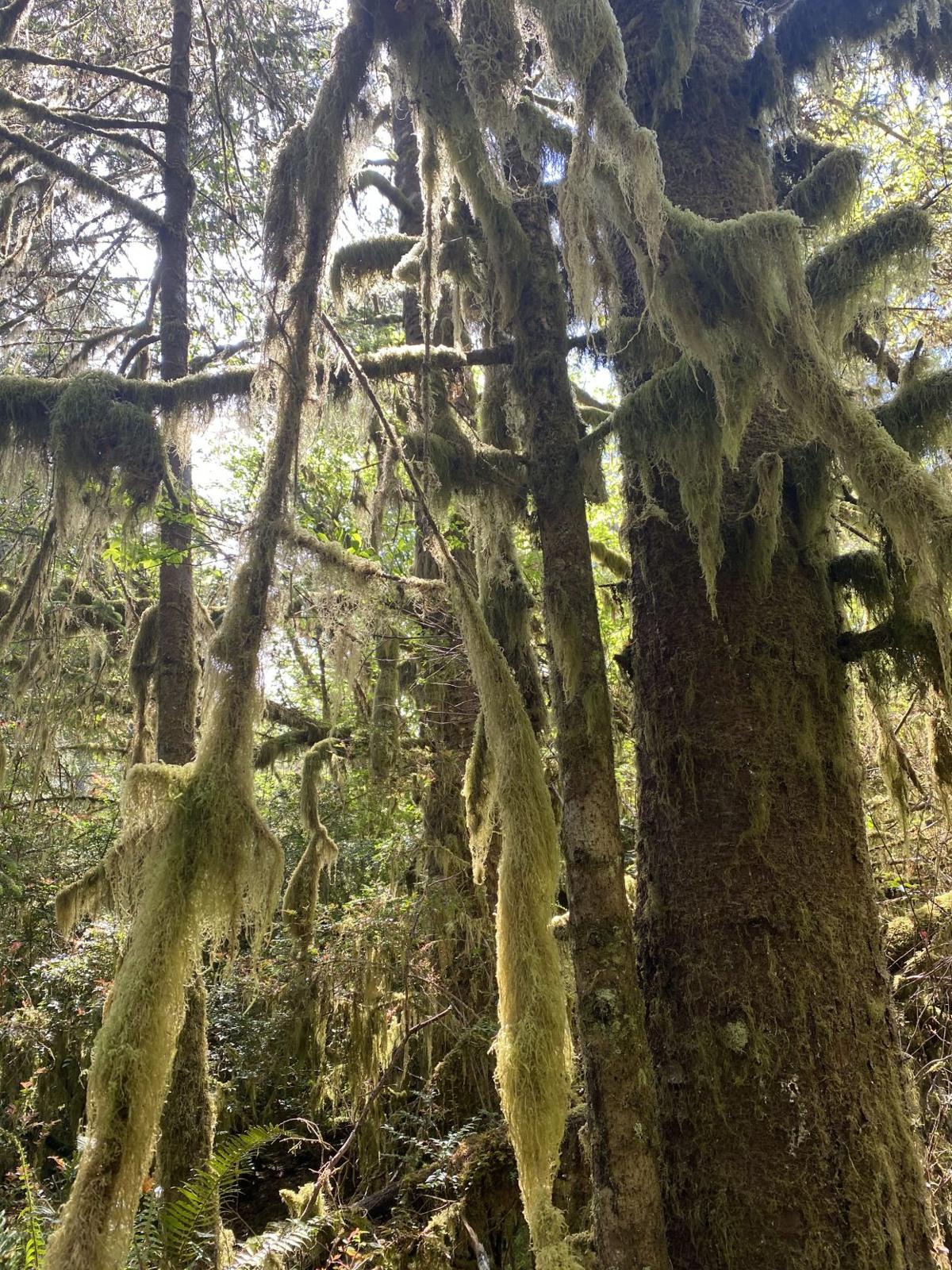 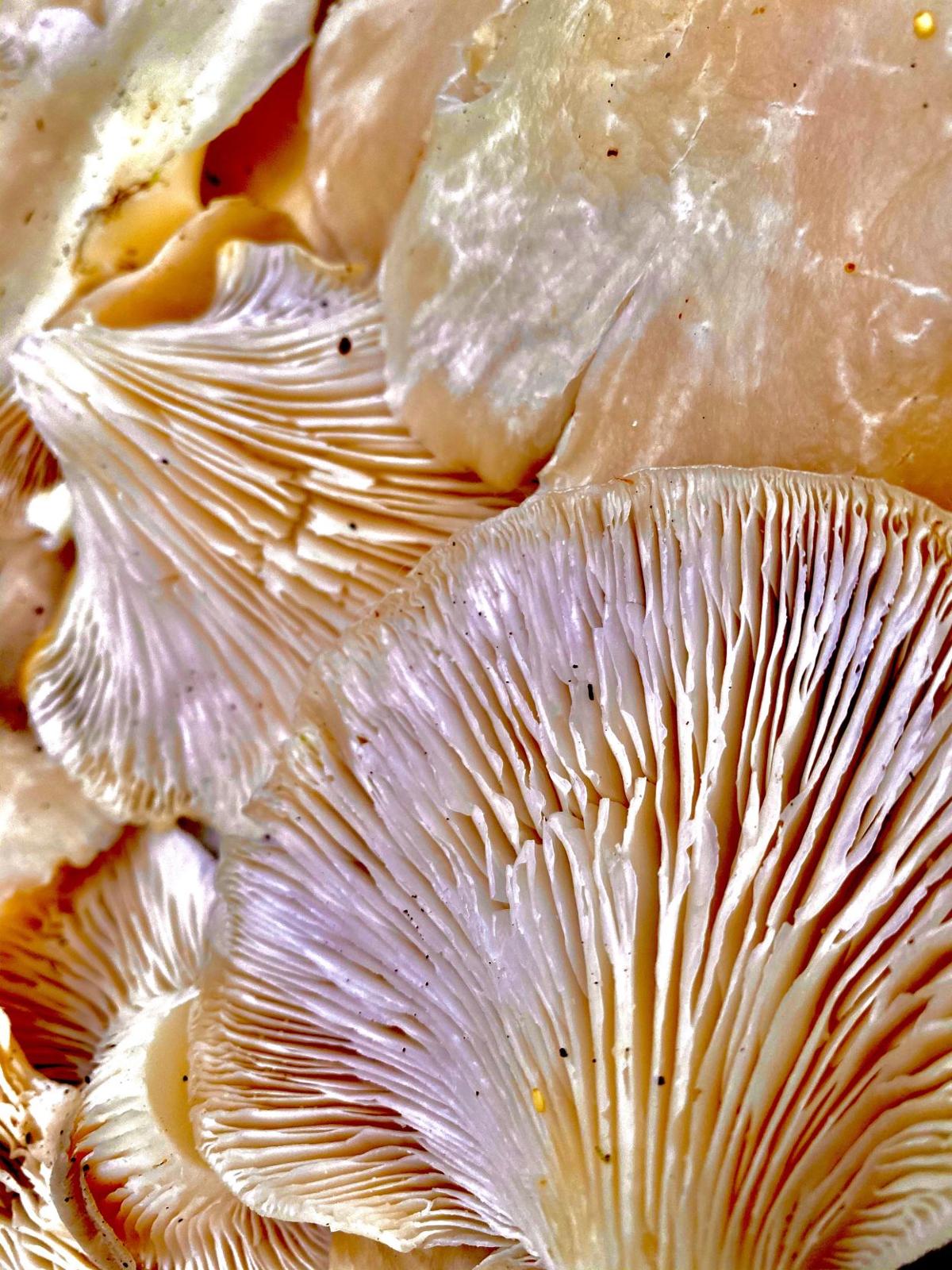 A row of wild oyster mushrooms.

My friend Steve Romero is one of those undeterred guys who steps off a trail and plunges into the deep underbrush in pursuit of wild ingredients: fiddlehead ferns, watercress and the allusive wild oyster mushroom. He steps forward gleefully, his heart beating rapidly.

“I am home,” he thinks. The word bushwhack comes to mind.

“Hurry up,” he says, “I’ve blazed a trail and back there a few hundred yards. I found a dead alder tree loaded with oyster mushrooms.”

Off we go, two souls on a pilgrimage.

The deep forest creates a trance. The air is fragrant but seems a bit short of breath. So is the light, thin, that is — fractured and ladled out in small, delicate servings. The ground is thick underfoot, damp and crowded with a patchwork of bramble. False solomon seal pokes upward like a soft carpet.

Salmonberry bushes, not yet ripe, crowd against you like an outcropping of humans on a New York City subway platform. And huckleberry idles, the fruit’s blossom still months away. The tall majestic trees are mostly alder, spruce and pine. On the dead alder stumps, lay pale-white oyster mushrooms, called so because of their color, shape and sublime taste.

We trudge on, cautiously stepping between the verdant plants, careful not to break limb or branch. Perhaps this is a territorial instinct or the ancient precaution of remaining hidden from the gleaming eyes of a predator.

The sunlilts south. The days are still short but not as drastic as during winter. Under the green scattering, nearly black after the rainfall are thousands of falling needles. Fluttering, gathering, rotting. Unlike the spread of concrete and asphalt, this is the natural way of the planet. With decay comes life.

Steve is a city kid who built a home in Oysterville and adapted to the natural world in his backyard like a badger seeking shelter under a decayed stump or a tunnel wedged into clay and duff.

In Steve’s backpack is a pair of shears.

Along the way he clears away some of the gorse. Yes, he is trailblazing in a sense. Truth be told, that lovely yellow-clad bush with sharp spines is quickly invading the fragile ecosystem of Leadbetter Point State Park and the Long Beach Peninsula. Park rangers spend a lot of time attacking the pest. They may be losing the battle.

Our two families have been quarantined for a couple of months. Steve and I arrived in separate cars. The only other mammal we see is a sow bear. “Thirty feet away,” he says. The bear seems indifferent and we slowly slink away. I am glad to be here, bear or no bear. I feel the release of so much pent-up energy, and a fair amount of anxiety, to boot. I am thinking, you too can take a walk into the green lush world of our backcountry, the out-bush of the Long Beach Peninsula. You too can walk privately and carefully along the plethora of forest trails and deserted beaches. Practice social distancing. But come.

Why did Steve choose to retire to the peninsula? That answer is clear, here, in this land of forest and beach and crashing ocean waves. Leadbetter Point State Park is surrounded on three sides by the Pacific Ocean and Willapa Bay, one of the most pristine venues in the U.S. I have descended into Death Valley and walked on the rim of the Grand Canyon. I studied in New York City and in Paris, France. I would go back in a flash. But here, in our small corner of the world, we are surrounded by landscape all as lovely as the high mountains and raging rivers.

Steve moves through a forest now inundated with gorse. He leads me on, stopping only to clip back the invasive bush. Bird song is sharp, soft, rolling and sweet. A rain lifts and pelts us for a few minutes. Then, the sun comes tumbling through.

We relish the deep green. We are free for a couple of hours; free of the pandemic and worry. Free in the land of persistent evergreen, ocean and the poetry trees offer, our silent friends with deep roots.

Mushrooms have a symbiotic relationship with the trees. They draw energy and nutrition through their mycelia. When the mushrooms die, they give back. So is the way of the forest. So it impacts us, this voice like a silent dog whistle, a subterranean mantra emanating from terra firma.

Two friends fashion their own way, an unfurling path through bramble, under tree and charging sky and beside the surge of bay water, of ebb and flow. After cutting a basket full of mushrooms we stumble back home, happy wanderers, appreciative always of nature’s rich gift.