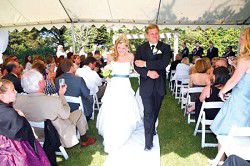 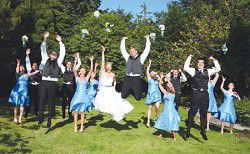 If the meeting, courtship and engagement of Julie Demersseman and Kyle Kupers were made into a movie, it might be called "Romancing the Skies." Julie, a flight attendant and Kyle, a pilot, both work for Horizon Airlines. They met on the job. She's originally from Colorado, although most of her family lives in California. He's from Washington state. They get a kick out of telling the story of their first date.

It seems she lived in Denver while he was based in Portland. When their paths crossed at work, they met for coffee. Kyle followed this up with a call asking Julie to dinner. To make a long story short, living in different parts of the country, bad weather, cancelled flights and a Christmas dinner (where she met his friends) conspired to make their very first date seven days long! What can only be called "fate" put them in the same city at the same time long enough to spark a friendship which, over the next two years, blossomed into love. "We had such a great time together that week," remembers Julie.

Some time later, over dinner at Higgins Restaurant in Portland, Kyle proposed. Things didn't go quite as planned, though. The idea was to come around to Julie's side of the table and get down on one knee. As it turned out, the table was long and another diner in a wheelchair made getting next to the woman he loved rather problematic. "I panicked," laughs Kyle. He stood, causing Julie to ask, "What are you going to get?" Then, "he started saying all these sweet things," she says smiling. He followed this up by showing her his grandmother's ring. He'd even made an appointment with a jeweler to resize the the ring the next day, which was good since Julie's answer was "Yes."

Planning for the big day was very much a team effort for Kyle and Julie. Kyle's approach, he says, reflected good advice he got from a buddy... "always have an opinion; just remember it never matters." (Julie smiles indulgently at this.) The couple loves to dance. In an inspired move, they took dance lessons at an Arthur Murray studio and worked up an actual routine for their first dance together as husband and wife at their reception. What a wonderfully unique way to visually reinforce how you'll be dancing through life together from that day forward, totally in sync and gliding gracefully with every step.

Lauren Young, from the Surfsand Resort, helped coordinate key activities. Under her able supervision, guests were treated to a sit-down dinner of "surf and turf" in the banquet room. In terms of menu choices, the emphasis was on using local, sustainable food from Oregon or Washington. (Kyle's family's business, called "Shepherd's Grain," grows, packages and distributes sustainable flour.) Portland's French bakery, St. Honore (who's the patron saint of bakers) fashioned miniature French pastries on multitiered silver trays especially for reception. They also whipped up a simple, supremely elegant white layer cake with butter cream frosting, boasting a single blue flourish along its bottom edge. Not one bite of wedding cake was left over, said Julie.

The wedding florist was Delta Design in Warrenton. According to Julie, Chris at Delta, "did a great job and took care of everything...(she) was easy to work with and helped them stay within their budget." The flowers of choice for the bride and bridesmaids were blue hydrangeas; the guys had white "bouts." In her bridal bouquet Julie carried a locket with a picture of her father, who'd passed away a few years ago. He'd had seven brothers and been "a favorite" in the family. All the brothers were at the wedding, which meant a great deal to his daughter.

The bridal gown came from David's Bridal in Portland. Julie says she ended up buying the first one she tried on, although she looked at several different dresses. No sparkles, beads or lace for this bride-to-be... just a chic gown of white satin with clean lines, a tasteful band of blue at the waist, a strapless bodice and a train.

The North Coast's CB Events in Cannon Beach furnished the DJ for dancing. He played lots of Earth, Wind and Fire, which is one of the groom's favorite bands. The disk jockey also adhered to a "do not play list" the couple had drawn up beforehand. At the ceremony, Gaylan David, from the Portland area, sang and accompanied herself on the guitar. Her performance included at least a couple of songs requested by the couple.

As the wedding day drew near, the groom's parents rented a house at beach and hosted the rehearsal dinner. Members of the wedding party feasted royally on Columbia River beef. The evening culminated with a bonfire on the beach, where they were joined by other folks in town for the impending nuptials.

On Saturday, June 27, Kyle and Julie were married at Surfsand Resort's beautiful Haystack Garden Retreat Center in Cannon Beach, with roughly 120 friends and family looking on. They'd had a special Valentine's Day date at the Resort earlier. Said Julie, "As soon as I saw the place, I knew I wanted to have my wedding there." This is not surprising since the Surfsand is the only facility of its kind in such close proximity that the views of Haystack Rock are breathtaking.

Before the ceremony, Julie Adams, of Julie Adams Photography, took the wedding photos on the beach. The weather was perfect that day-73 degrees, no wind and lots of blue sky and puffy white clouds. It was so nice, in fact, that several guests from California talked about moving to the area, recalls Kyle. Julie was especially pleased about that. She'd consulted an Almanac beforehand and the day turned out exactly as predicted.

Julie's brother, who's 23, gave her away. Her aunt, Sheryl Demersseman, a minister, performed the ceremony. The couple opted for a traditional religious service with vows, a prayer and two readings from the Bible by family members. Each of them had composed "promises" ahead of time - a list of five or six items that were a sweet surprise at the altar.

A plan was in place to move things indoors if the weather was bad, but it wasn't needed. Everything went like clockwork. With help from family, Julie was able to relax and enjoy herself, free from all logistical concerns. At Kyle's suggestion, she'd "planned her wedding day like she wasn't going to be there," diligently drawing up lists and assigning tasks ahead of time. What a great idea!

At the wedding, there was one moment with comic potential when all groomsmen and the groom were in position. The minister, Julie's aunt, signaled for the procession to start the aisle walk, but there was not a bridesmaid or bride to be found! It turns out that Julie and her attendants were in a nearby room laughing, drinking champagne and taking "pyramid pics." In the midst of the fun, one of them finally asked "aren't we supposed to be doing something?"

After the wedding, the couple kicked back at home for a bit, visiting with friends who were still in town, delaying their honeymoon trip. Then in August, they went to Fiji, which was, apparently, full of New Zealanders and Australians at this "high season" time. Julie said she enjoyed "hearing their accents again" since she'd gone to school for a year in Sydney, Australia..

When she was a baby, her family lived in California. On a family vacation, her parents drove up the Oregon Coast. It turns out that Julie's first steps as a baby were at Cannon Beach! So getting married there, too, was nothing, if not appropriate... bringing things full circle. Congratulations Kyle and Julie!

Welcome to the best festival in the world...for dogs! Meet the cutest pooches of Dogstival 2021

Best and worst roles of the 'Friends' cast

Have you ever danced with the devil in the pale moonlight? Did you know these stars played SUPER-villains?