Metal sculpture artist Chris Goodwin welds wings together in her Astoria workspace. Goodwin works out of an old hanger at Tongue Point which was also used as a soundstage for movies like "Teenage Mutant Ninja Turtles III."<I><BR>DAMIAN MULINIX photo</I> 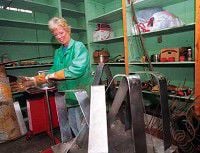 Metal sculpture artist Chris Goodwin welds wings together in her Astoria workspace. Goodwin works out of an old hanger at Tongue Point which was also used as a soundstage for movies like "Teenage Mutant Ninja Turtles III."<I><BR>DAMIAN MULINIX photo</I>

TONGUE POINT - Walking into Chris Goodwin's workspace, located in one of the old hangars at Tongue Point near Astoria, she will admit to its oddness. Painted all black on the inside could lead one to wonder a bit. But she's quick to explain the space she has used the last few years to create her metal sculpture art.

"I spent two months trying to find someone to rent to me on the Peninsula. Due to the welder and the plasma cutter, I couldn't find anyplace that wasn't afraid," she said.

She rents a small room in the hangar, which has been used as a sound stage on motion pictures shot in Astoria, it even still has a remnant from the set of "Teenage Mutant Ninja Turtles III." But it's big, and fairly secluded, so she can escape into the creative world of her mind, where found scrap metal can become a wonderful work of art.

She hasn't always done this, in fact she's rather new to metal sculpting, although she has done other forms of art all her life. She is a graphic designer for heavy industrial items by trade and through that she became aware of what could be done with things like plasma cutters and welders. Some of her sculptures have a very smooth, laser-cut finish, while others are found objects made into something new, often having a rougher exterior.

"I create things out of junk," she said.

Many of her ideas are originally designs that she draws up, making patterns for the pieces like a dress maker might. She shows off one piece and says, "I don't know what I'm going to do with it yet, but it was too cool to not get." She said her nickname is the "dumpster diva," for her flights through the trash in search of interesting scraps. She also receives items from people she knows.

Her sculptures can range from very large, like the one she has displayed in the port of Ilwaco's sculpture park, to more reasonably sized, to fit in one's garden or on a wall. She's currently working on a couple of commissioned pieces.

"I've got stuff from Florida to San Juan Islands. I've got one on a wall in a guys a house that's 10-feet by 8-feet tall," she said.

She's been making metal sculptures for the last four years on a professional level.

"I just love how you can take this chunk of steel and make these wonderful things out of it," she said.

Goodwin said that being able to touch her art is perhaps the appeal, calling it a three-dimensional appreciation.

"It's like this," she said as she ran her hands around a smooth piece of sculpted metal. "I can't hardly keep my hands off of it. Part of the thing with the bigger sculptures especially is the tactile, not just the visual."

She started out doing what's called a "cold weld," basically sticking steel together, but has since moved up to more advanced techniques like "wire-feed" and plasma cutting. This was all a long way from her first job in art, which was writing calligraphy for grocery store signs.

Alhough she still does graphic design, she said that she has been successful enough with her metal art that she can count on it as her main source of income these days.

"You have to think that your an affluent artist no matter what," she said. "If you think you're a starving artist, than you will be."

Goodwin noted that people in Long Beach actually commission quite a bit of art. Though it may not be the $4,000 sculpture, most can afford the smaller stuff for their gardens. She said that aside from local clients and buyers, she's looking to expand - her art was recently accepted to a gallery in Chelsea, N.Y., where she hopes to pick up some new buyers.