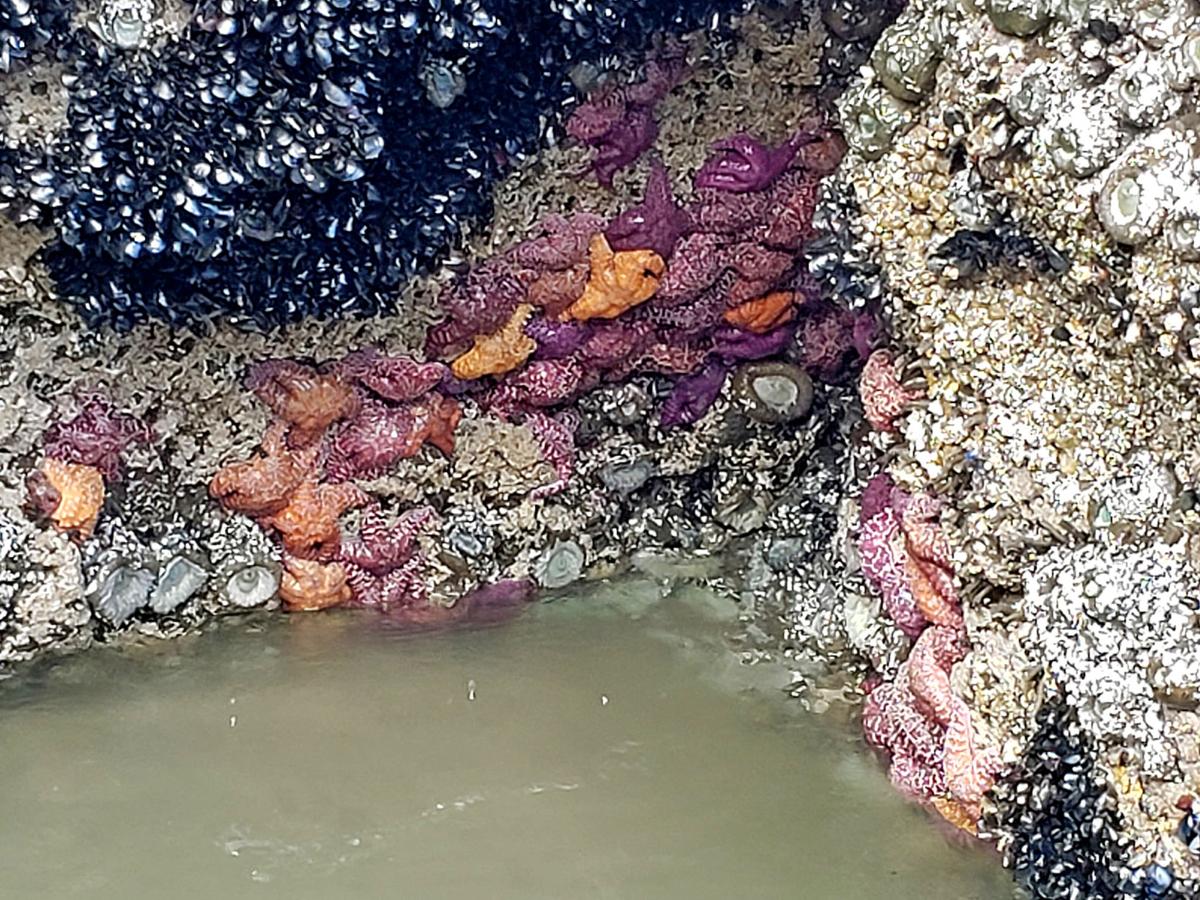 The rocky tidepools on the peninsula’s south end are home to ochre sea stars, the mussels they eat, and a host of other species. 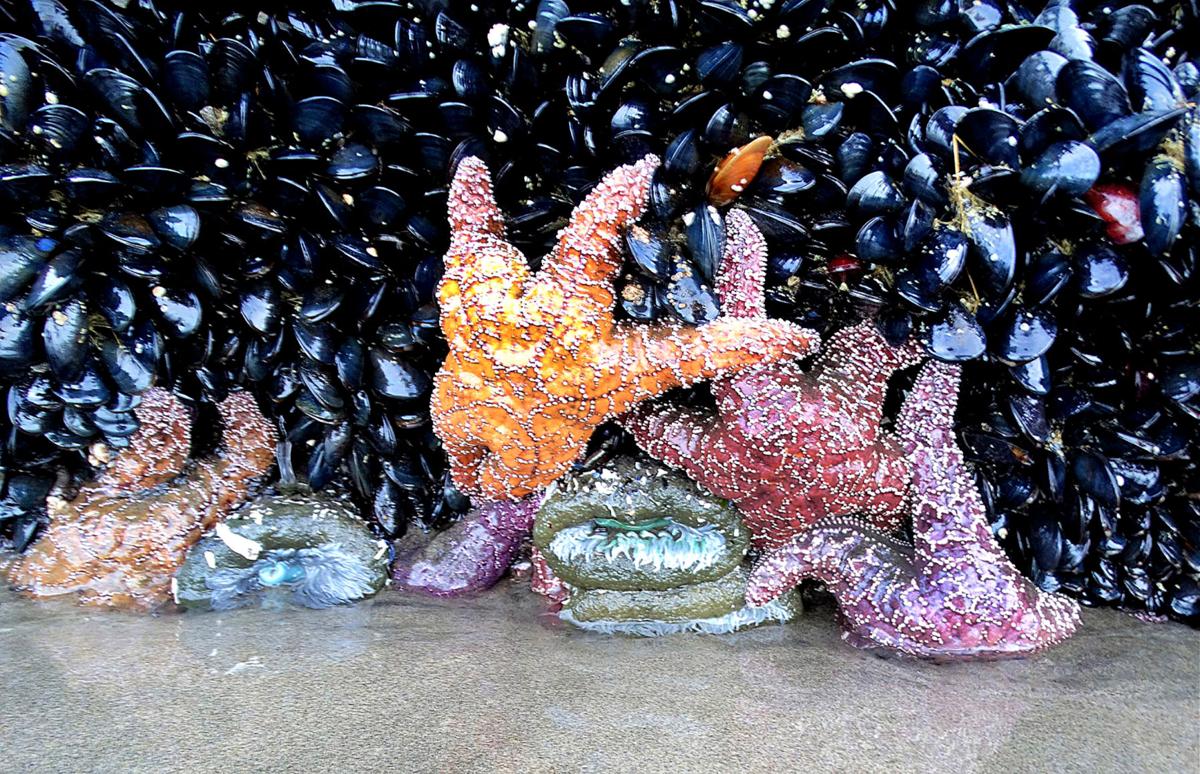 The Pacific Northwest’s native ochre sea stars — like these at Beards Hollow in Cape Disappointment State Park — come in a variety of colors from ochre (orange) to various shades of purple. They are one of several sea star species that were seriously harmed by an illness that struck in 2013-14. 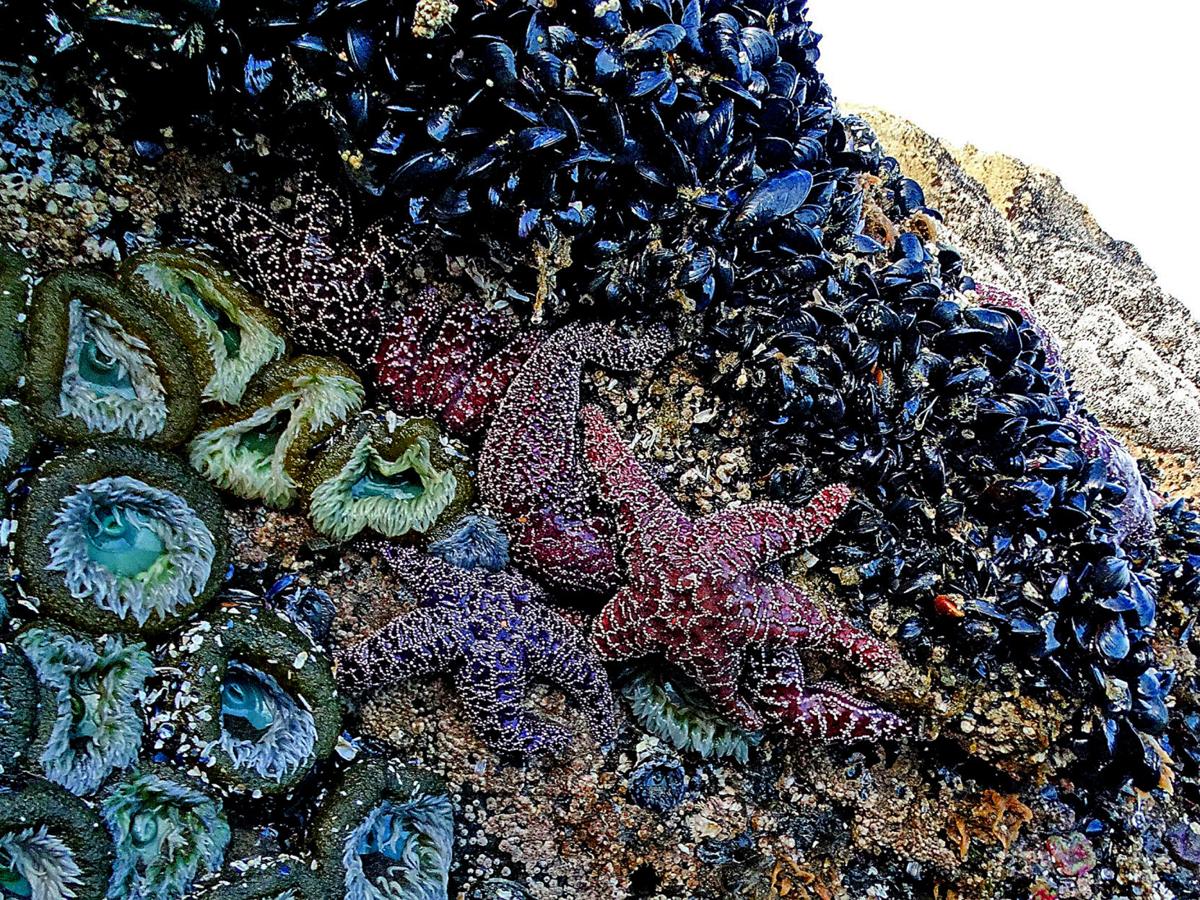 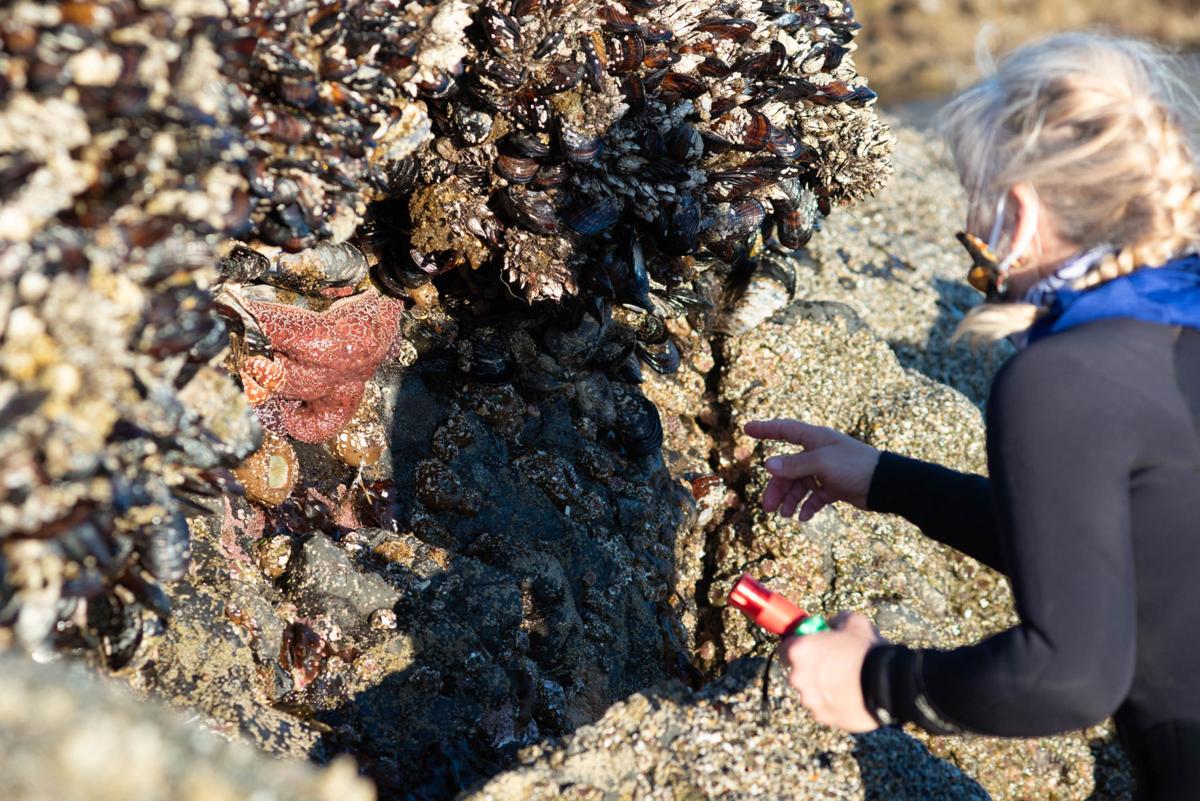 Lisa Habecker checks a massive sea star for lesions and other signs of disease in the tide pools at Haystack Rock across the Columbia in Clatsop County. 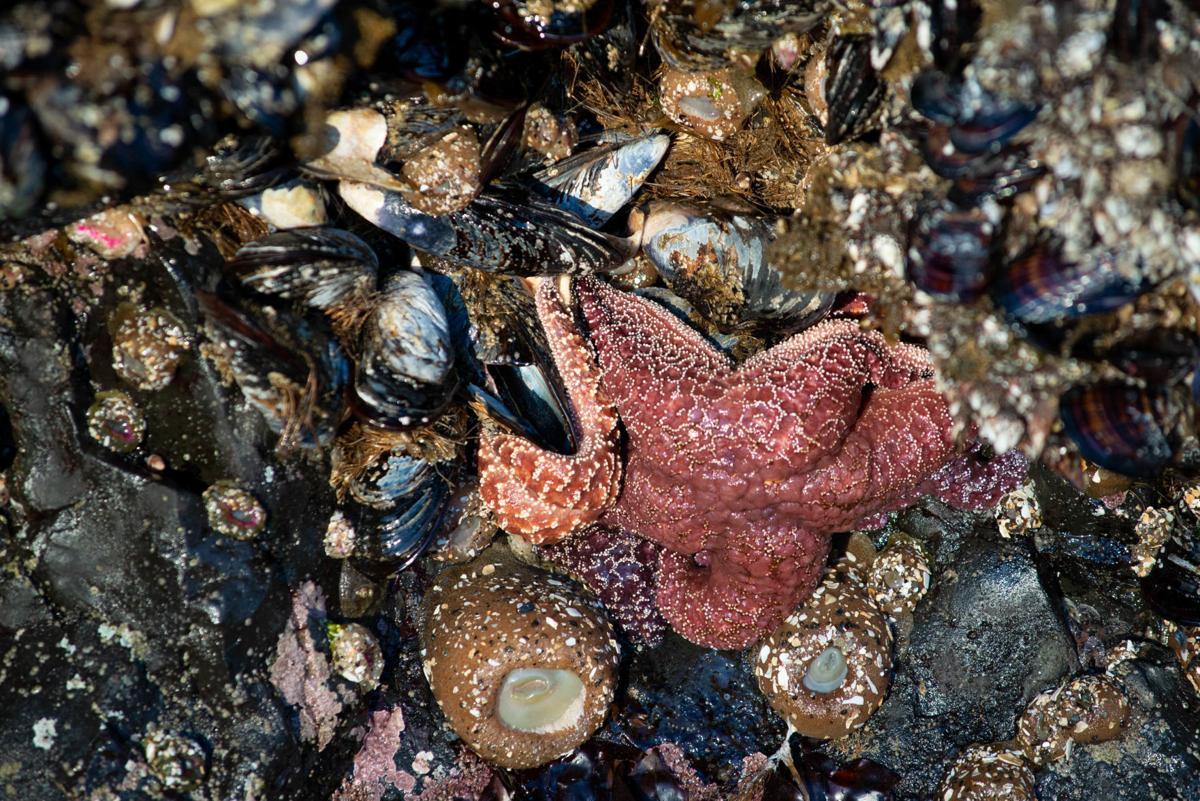 The rocky tidepools on the peninsula’s south end are home to ochre sea stars, the mussels they eat, and a host of other species.

The Pacific Northwest’s native ochre sea stars — like these at Beards Hollow in Cape Disappointment State Park — come in a variety of colors from ochre (orange) to various shades of purple. They are one of several sea star species that were seriously harmed by an illness that struck in 2013-14.

Lisa Habecker checks a massive sea star for lesions and other signs of disease in the tide pools at Haystack Rock across the Columbia in Clatsop County.

“I’m so used to looking for small ones, I don’t see the obvious big ones,” said the education and volunteer coordinator for the Haystack Rock Awareness Program in Clatsop County.

She shined a flashlight over the animal’s arms, looking for any lesions, the telltale evidence of a mysterious disease that decimated sea star populations on the West Coast in 2013 and 2014.

The five-armed ochre sea star is puny compared to what people used to see in tide pools around Haystack Rock. But with populations still down in our region because of sea star wasting syndrome, it stands out — a stray bit of bright color on the barnacle and mussel-encrusted rocks.

Sea stars have soared back in some places in the years since the wasting syndrome hit Washington and Oregon in 2014, but recovery has been uneven and remains uncertain this year despite other gains.

Even at local sites where populations seemed to be rebounding, physical growth now appears to have stalled.

“The individuals that came in seem at some places to be doing fine,” said Bruce Menge, a starfish ecologist with Oregon State University. “They grew. But in the last year or so the change in size has been fairly minor.”

Under conditions before the wasting syndrome arrived, it was not uncommon for researchers to find sea stars that measured about a foot and a half across. Given the right quantity and quality of food, Menge said, “these are animals that are able to just get bigger and bigger.”

Now it is possible they are not getting enough food, or the food they are finding is not providing the nutrition they need. Menge isn’t sure. That data has not been analyzed yet.

Ocean temperatures and chemistry are in flux. These and other shifts are only expected to accelerate with climate change.

If changes in the ocean lead to less nutritious food for sea stars — or a scarcity of prey in general — this could prevent the populations from recovering, as well as have lasting consequences on other organisms in the same ecosystems.

“We’re sort of in a limbo state at this point,” Menge said. “We don’t really know what’s going to happen … it’s all an unfolding play that we’ve never seen before and is totally unpredictable.”

Habecker counted fewer than 200 sea stars on three small rocks in a tide pool cluster below Haystack Rock in Cannon Beach during a survey this month. The largest sea star she found was under 6 inches — a giant compared to the other sea stars slurping down mussels nearby.

Before the disease, these same rocks were “technicolor,” she said.

Still, it could be worse.

Last August, Haystack Rock Awareness Program employees and volunteers could not find a single healthy sea star. This month, Habecker categorized most of the sea stars she found as only mildly affected by the wasting syndrome.

The syndrome affected around 23 different species of sea star and the ecologically more important species seem to have been among the hardest hit. The chain reaction throughout the rest of the sea stars’ ecosystems is not fully known.

The loss of the sunflower sea star in Northern California has certainly been felt. The species is still present, but no longer seems to exist in large enough numbers to exert significant influence on the organisms around it, also known as “ecologically extinct.”

In its absence, urchins, the sunflower’s prey, have exploded in number, mowing down kelp beds and transforming them into barrens.

In the Pacific Northwest, researchers predicted the loss of the ochre sea star — an important predator in the intertidal area — could result in a similar kind of takeover by mussels.

“That hasn’t happened,” Menge said. Or at least it has not happened across all the sites as they had expected. They don’t know why.

Sea stars are notorious at resisting close study. Try to fit them with a pit tag — the kind of small tag commonly used to collect data on salmon — and they’re likely to expel it, as researchers discovered in a lab setting.

“If you put something around their arms, they will sluff it off or even remove their own arm to get rid of whatever it is,” Menge said.

Because of their propensity to grow or shrink depending on food availability, sea stars are also difficult to age.

Researchers usually rely on pulses of age groups to determine relative age. They look at the arc of groups of large adults compared to what are clearly very young sea stars.

If there is any silver lining to the wasting syndrome it is that in wiping out a vast percentage of adult sea stars, researchers know the animals they are seeing now must be within a certain age range and can chart their progress.

But the coronavirus pandemic has hampered further research this year.

Access is restricted at some sites — those located in state parks, for example, which have been closed for weeks due to the covid-19 emergency. Field crews are limited by social distancing and citizen scientists face many of the same restrictions.

For longer-term datasets, this lost year may not be a problem, Menge said. Still, it is important to be able to look at the sites on a regular basis.

The cause of the wasting syndrome remains unknown. Early on, it was thought a virus was behind everything, but the virus turned out to be killing off only the sunflower sea star. It is possible a number of factors are causing the disease.

“Nothing has popped up,” Menge said. “It is still very much an unknown question.

More about our ochre sea stars

Ochre sea stars are relatively large sea stars, with five arms and a rough surface, the short spines on the upper surface arranged in wavy pat…

Dr. Birx has a warning for rural Americans