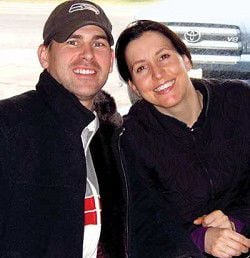 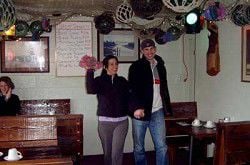 <I>NANCY THOMPSON photo</I><BR>The happy couple launch their married life together after dealing with a wedding-day crisis.

<I>NANCY THOMPSON photo</I><BR>The happy couple launch their married life together after dealing with a wedding-day crisis.

OCEAN?PARK - Dressed in a baseball cap, jeans, casual shirt and dark colored jacket, Daniel Patzer didn't look like a man about to get married. But that was his plan. Flanked by his casually clothed fiance, Magee, and accompanied by their friend Dustin Brown, who would perform the ceremony, the setting was to be on the sand at the Ocean Park beach approach. But poof. The Easter Sunday weather quickly deteriorated and Patzer, his bride-to-be, along with Brown and his wife April, headed for cover. When they walked into Colleen Smith's Full Circle Cafe, they were immediately engulfed in warmth and support.

The two couples ordered breakfast. Somewhere, during the meal, the idea was brought up to have the wedding right then and there, amidst the aroma of food on the grill. Cafe crew members Cristine Swett and Nancy Thompson happily embraced the idea and sped to the back room to tell Smith, who kicked into action.

Smith said one of her first thoughts was, "They'll need flowers!" She snatched a string of pink felted flowers and raced upfront. Seeing a young woman in her late 20s, Smith approached, smiled and handed off the makeshift felt bouquet.

The woman was April Brown, not the bride-to-be. "No! It's not me!" April said and redirected Smith to Daniel's fiance, Magee.

Smith was asked to sign the marriage certificate as a witness. When she bent down with the pen, she saw the information for Dustin Brown. Near the line where an ordained or licensed minister must sign and enter his official number, Dustin had also put his town, Walla Walla. Smith thought, "I know lots of people in Walla Walla," but she didn't say anything at the time, even though she wondered if there was any kind of a connection between them. "It was their time - it wasn't for me - so I didn't ask 'who do you know that I might know.'"

Every bride needs a maid of honor, so Smith assigned the job to cafe crew member Swett. And of course, someone needed to take photos. Smith ran to the back and got her digital camera and handed it off to Thompson, who was now the official wedding photographer.

"They wanted it to be very informal," Smith recalled, but she told the couple at the end of the ceremony that "It needs to be announced that they are now man and wife." That's when the couple from Seattle, Mr. and Mrs. Daniel Patzer, stood up, holding hands and smiling. As Smith made the announcement, the couple walked in the aisle between tables, in front of a sign that read "Today's Desserts." With her right hand, Magee Patzer raised the faux bouquet and then tossed it.

"I caught my own bouquet of felted flowers," Colleen recalled, laughing.

Smith asked the Patzers if photos of the wedding could be placed on the Web site for the cafe and Tapestry Rose, Smith's businesses that share the same building. (www.tapestryrose.com). They obliged. Within days, Smith sent the couple an e-mail, which read, "I have attached all the pictures to this e-mail for you. Thank you again for letting us join in your special day." She signed it Colleen and the Full Circle Crew.

Daniel Patzer replied to the e-mail, thanking Smith and saying, "We look forward to returning annually and stopping by. Dustin's dad, Frank Brown, owns the beach house we were staying at, about two blocks away, and (he) told us he knows you well. I am sure you will be seeing a lot of us and Dustin's family in the future."

Smith had not known this on the wedding day, but now instantly made a connection. Frank Brown's beach house is just a few doors away from her own home. "I've known Frank for 32 years," she said. She thinks she might have seen Dustin when he was growing up.

There is a connection now, between the Full Circle crew, the newlyweds and the couple that was there to marry them.

So what's on the menu for next Easter? Smith laughed and said, "Now, every Easter, I'll have to have the Daniel Patzer breakfast special."