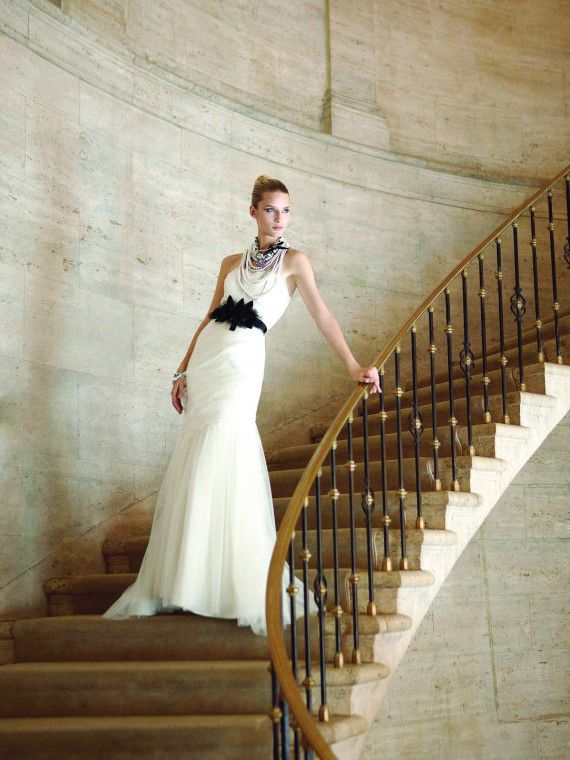 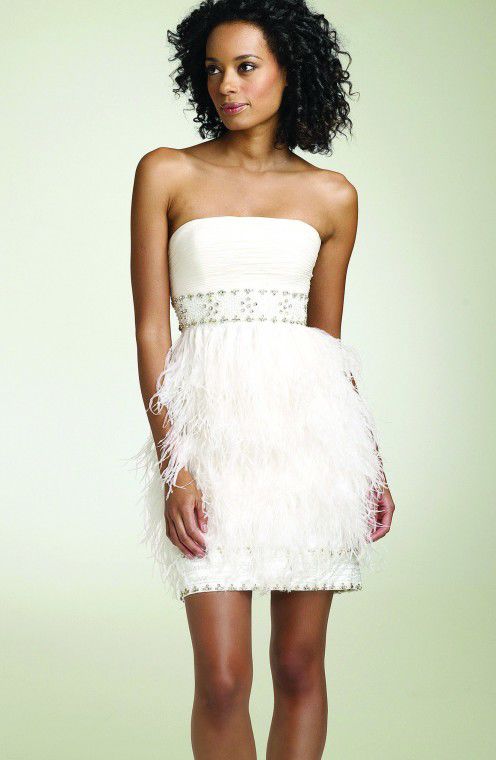 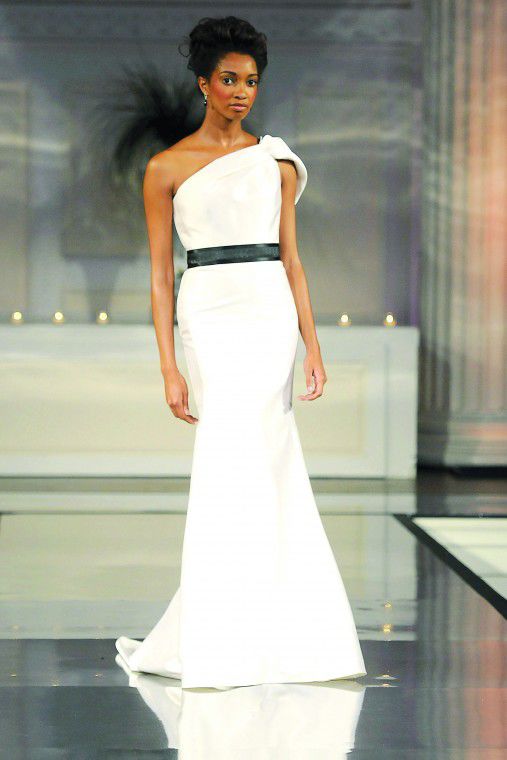 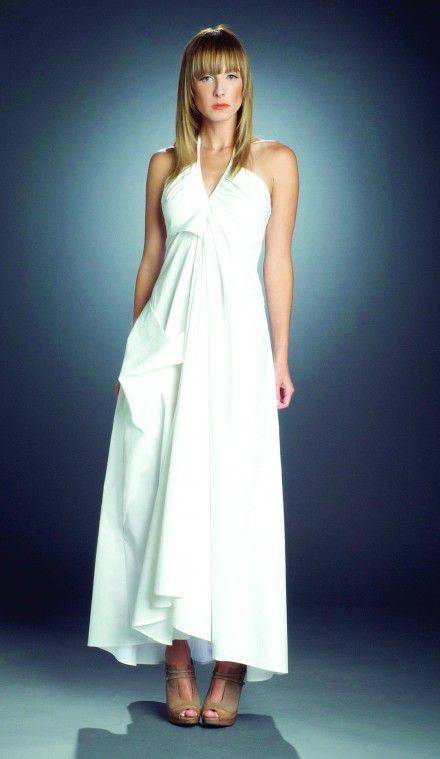 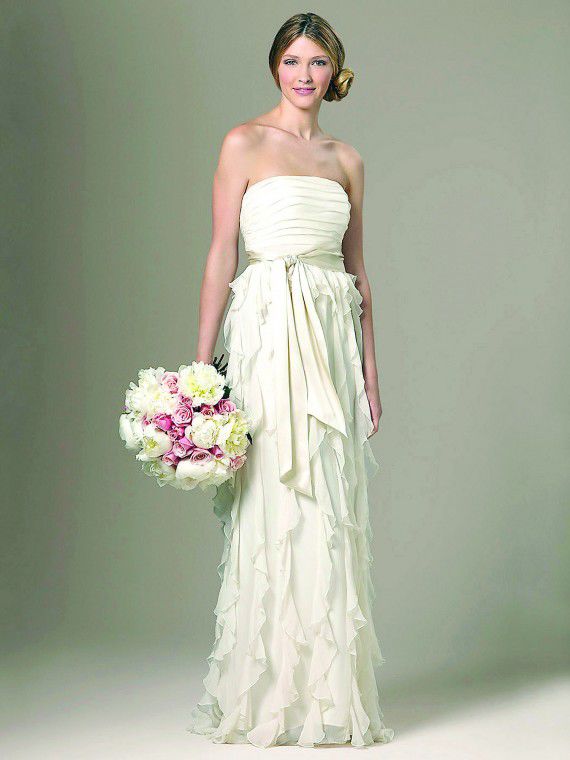 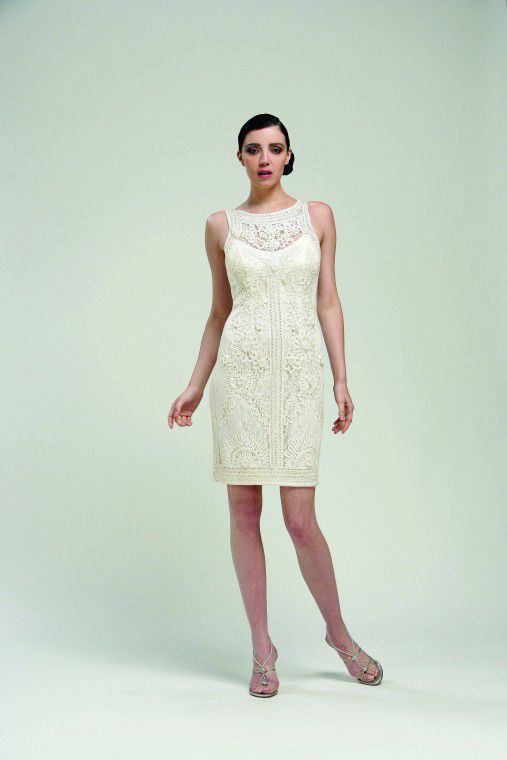 Theres a new sense that less is more in the bridal gown world, both in terms of style and price.

Fuss-free gowns, in columns, sheaths and cocktail styles, are getting their due as brides scale down their version of their dream dresses, maybe because theyre older brides or are tying the knot in a more casual environment. In step with the mood, some brides are slashing their fashion budgets in these not-so-flush times.

As a result, a number of brides are embracing non-bridal styles, per se, made by the likes of contemporary designers, such as BCBG Max Azria and Sue Wong  not your typical go-to bridal resources but ones that are creating sexy, romantic and feminine gowns that are absolutely suitable for weddings, according to Wong. The shift has prompted other designers and retailers into rolling out their own wallet-friendly bridal options that are less showy and more sophisticated.

In spring, White House |Black Market unveiled a strapless dress with a high-low hem for $499, and now it has added three more looks all for under $700. After hearing that its customers were buying its dresses for bridesmaid functions, The Limited debuted a two-dress collection online this summer for under $300, with plans to expand the line to seven looks by January 2011 (four styles are available). Higher-end designers joined the mix this summer when the likes of David Meister and Carmen Marc Volvo signed on with New York-based Designer Bride Inc. to license bridal gowns for $1,500 to $3,000 that are not over-the-top.

Brides want to tone it down, says Jill Giordano, co-owner of San Francisco-based gr.dano, a contemporary line of architecturally inspired clothes. They want their dress to match their style versus their age. You can still wear something thats nontraditional and look spectacular.

Giordano recently outfitted a violinist for her wedding. The musician had picked out a gr.dano skirt made of crinkled nylon for a press tour and opted to wear it along with a custom-made knit blouse for her special day. The possibility of catering to more bridal customers is on Giordanos radar, especially with her spring line that includes a white halter maxi dress in cotton poplin for under $400.

Were definitely trying to hit the events market but keep it in line with what we do  clean, approachable, flattering styles, Giordano says.

White House | Black Market got a plug for its new wedding dress collection in the September 2010 issue of O, The Oprah Magazine, which highlights its elegant strapless Victoria bridal gown in ecru tulle and satin with a floor-sweeping mermaid skirt. The collection also features a mix of accessories, such as satin slingback heels and a clutch.

Along with three bridal gowns priced at $298 (and one at $398), The Limiteds wedding collection offers two bridesmaid dresses under $100, plus accessories, such as teardrop earrings and bobby pin sets. Its strapless ruffled wedding gown in crinkle chiffon generated positive reviews online, many from second-time brides and those having casual weddings. Based on the feedback, The Limited is planning to test the dresses in stores in the next year, says Marci Milito, director of public relations for The Limited.

Even though brides dont want to spend a huge portion of their budgets on their dress, they still want that shopping experience and were looking to make it fun and posh for her, Milito says.

Los Angeles-based David Meister, whose eveningwear has graced celebrities such as Emmanuelle Chriqui and Diane Lane, is injecting glamour in his bridal gowns hitting about 20 stores in November, including Neiman Marcus, Couture Bridal in Bal Harbour, Fla. and Bridal Images in Rockville, Md., according to Erin Haggerty, senior manager of public relations for Kellwood Company, parent company of David Meister.  A tulle ballgown with a tiered skirt and a one-shoulder silk wool Mikado gown are a couple highlights from the 12-style collection, which hit the bridal market in October.

Meisters gowns, along with those of his contemporaries at Designer Bride, are targeting a new bride, says Sol Baratech, marketing manager for Designer Bride.

More independent and more mature, she now pays for her gown, Baratech says. She is also more sophisticated and fashion savvy. Todays bride wants a designer gown, which is more fashion-forward compared to the princess-like dresses worn years ago.

That designer touch is arriving at Davids Bridal in February 2011, when über-bridal designer, Vera Wang, debuts her line, White by Vera Wang, with the national retailer. The collection, priced from $600 to $1,500, gives fans a chance to buy a Vera Wang-influenced look without the sticker shock.

Other high-profile names, like Nordstrom, have entered the wedding business. The Seattle-based department store has added a wedding section on its website devoted to gowns made by contemporary designers, such as Laundry by Shelli Segal and Nicole Miller, all of which retail for under $1,000.

Full-service bridal boutiques have also noticed an uptick in interest from brides seeking gowns with down-to-earth styles and prices.

Theres growing interest in that price point, says Allyson Marshall, manager of Bridal Boutique in Baton Rouge, La., which carries lines such as Maggie Sottero, Casablanca and Mori Lee. About 60 percent of our business is devoted to that category compared to 40 percent a couple of years ago.

Boutique owners caution, however, that the dress a bride chooses should mirror the vibe of the wedding.

About 10 percent of the wedding budget should be devoted to the wedding gown, so if youre having a swanky, $50,000 affair and your gown doesnt measure up, you may not look right, says Bobbie Lopez, owner of All Brides Beautiful in Hudson, Ohio.