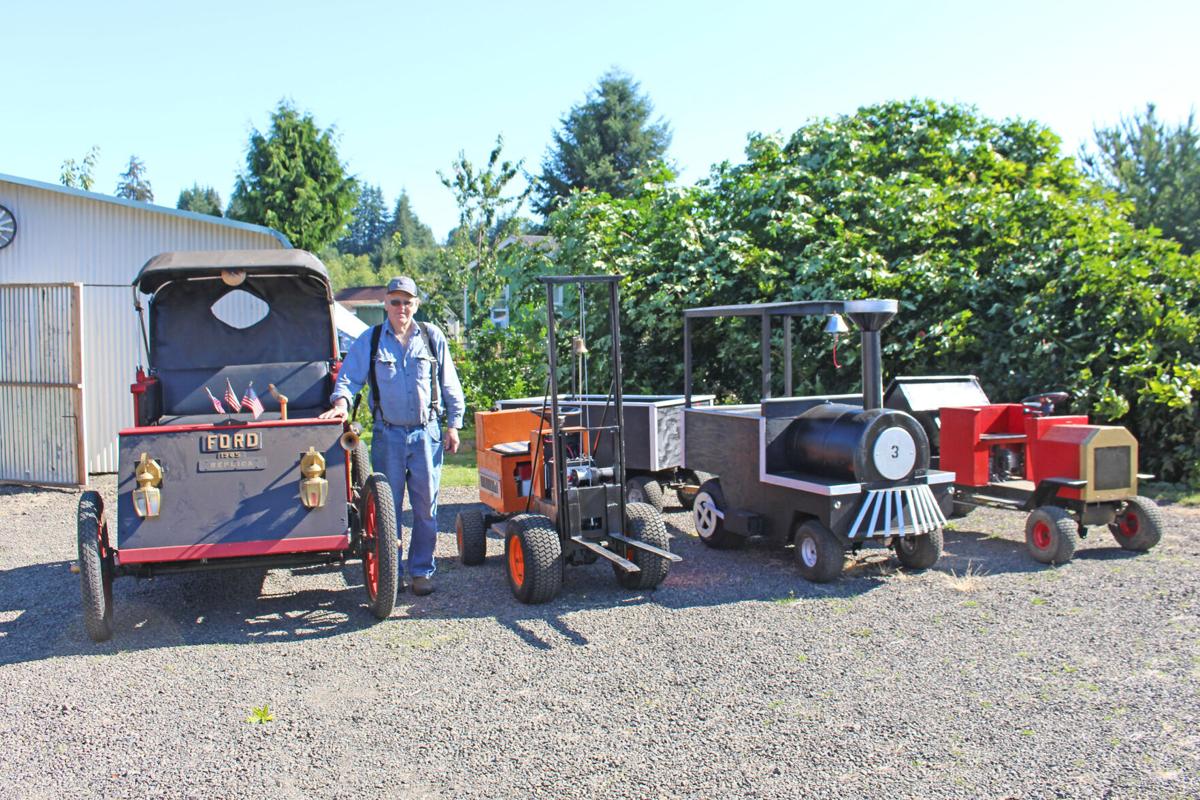 Raymond Badger stands beside his 1905 Model T replica. Other creations pictured here, left to right, include the forklift, a locomotive with passenger car and a dump truck. 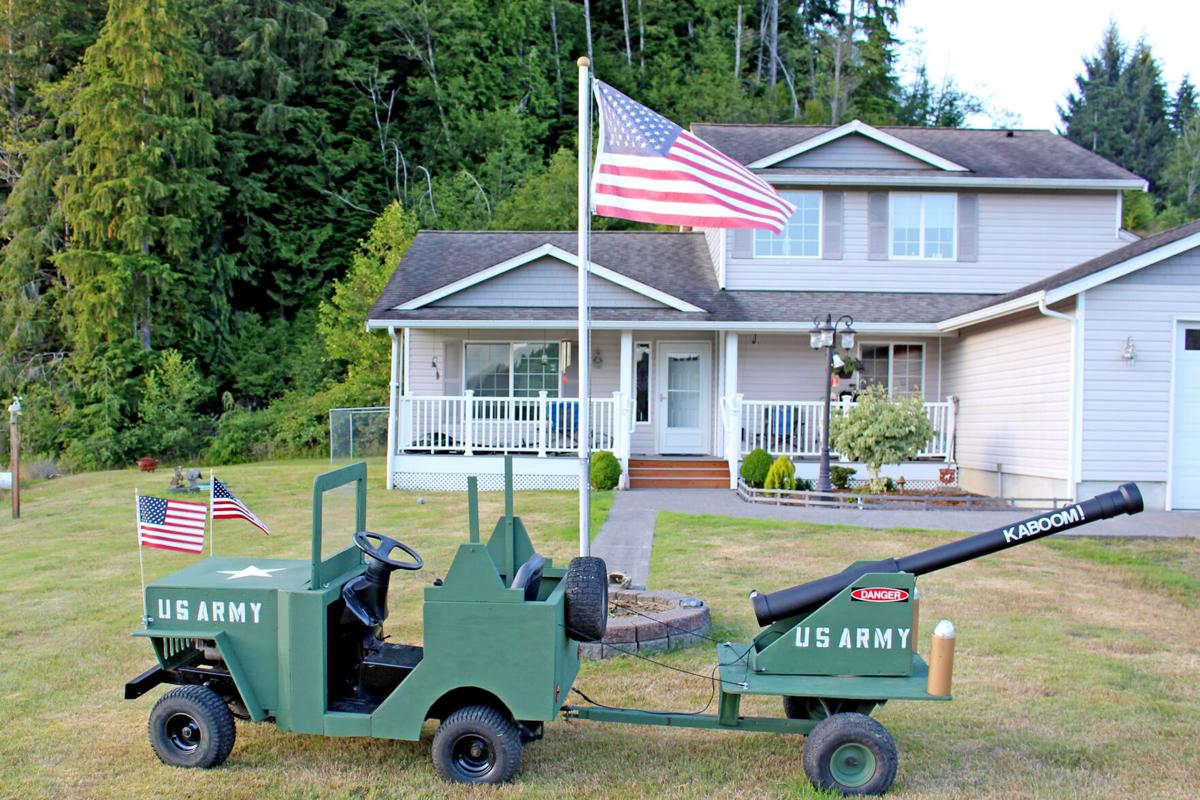 Kaboom the water cannon, a Badger creation, is popular with kids of all ages. 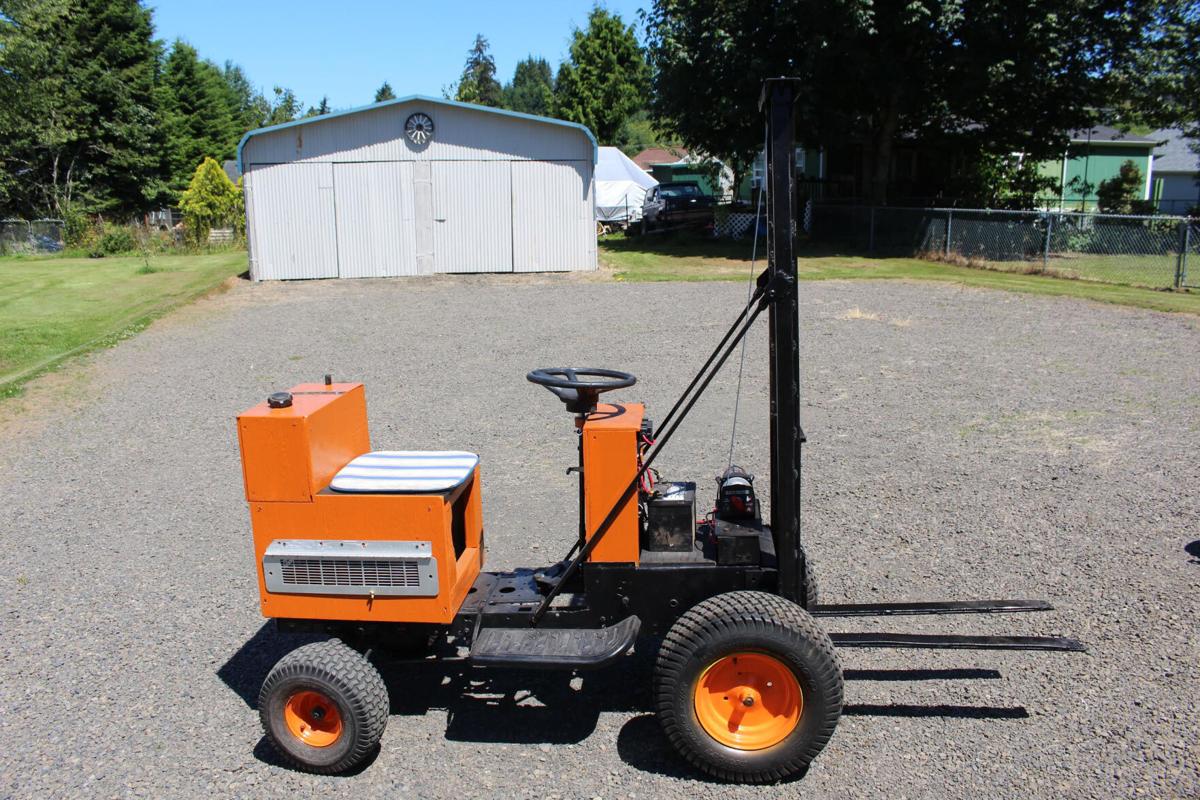 A pint-sized forklift is pragmatically useful. 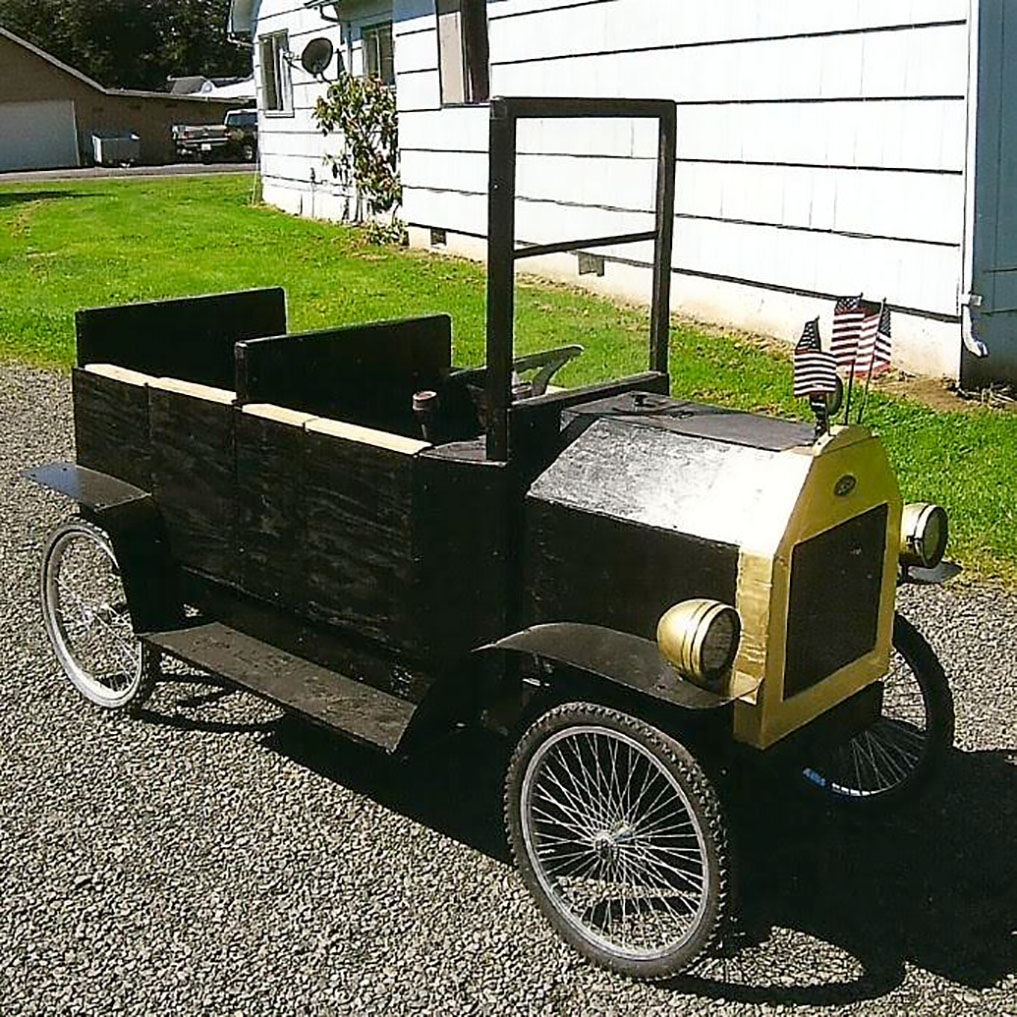 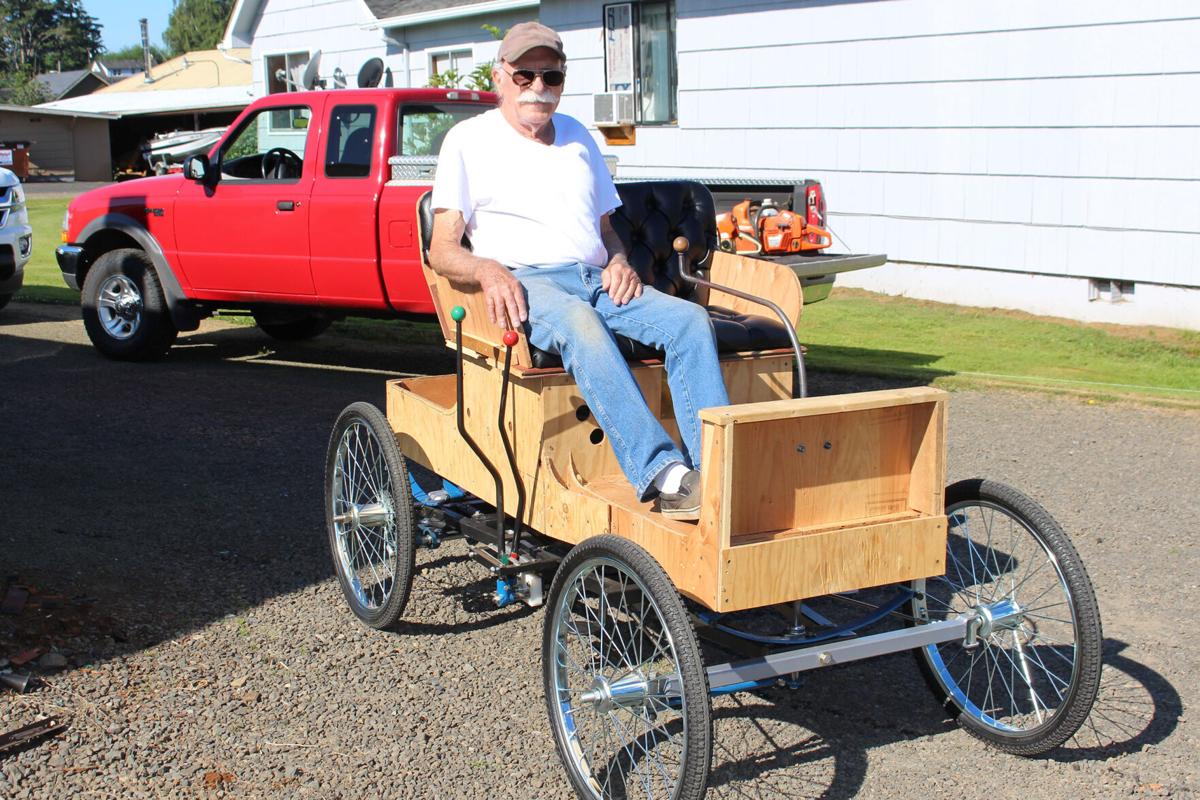 Raymond Badger stands beside his 1905 Model T replica. Other creations pictured here, left to right, include the forklift, a locomotive with passenger car and a dump truck.

Kaboom the water cannon, a Badger creation, is popular with kids of all ages.

A pint-sized forklift is pragmatically useful.

There are people in this world that just know how to live and genuinely enjoy life and 87-year old Cathlamet resident Raymond Badger is one of those people. Spending a little time with him is an enjoyable experience and, more often than not, a learning experience as well.

He is a man of moderation in his lifestyle, a devoted husband and father and one who looks at every situation with a positive view and a wonderfully good sense of humor. More importantly for this article, he is an industrious man with an inventive mind for creating ways to make things. He enjoys having projects to do and is always planning for the next project before the current one is completed.

Always on the lookout for unwanted riding lawnmowers, Badger’s next project is to create another Army jeep with a new twist — it will have a mower deck and be able to cut grass.

Fans of Badger are well aware of his little exploding outhouses, dust pans and birdhouses built from old automobile license plates, and wooden toys of all kinds for children to enjoy. He is a fan of Ford Model Ts and very experienced in their repair and operation. Over the years, many visitors to the Wahkiakum County Fair have enjoyed rides in Badger’s Model T Doctor’s Coupe and the cars of others in the local Model T club. From a rusted-out old Model T pickup that to most eyes would have been unrecoverable, he once fashioned an extended open cab touring car. Today, that creation is used at a California vineyard to transport visitors. Using the chassis and engine from a small Nissan pickup, he created a vehicle he called “The Whats It,” reminiscent of the Model T and Model A age. The Whats It was purchased by the Mike Mouliot family. In more recent times, he has seen the opportunity for creations based on discarded riding lawnmowers.

Using just such a lawnmower, Badger built the locomotive engine that in past years has been used by the Wahkiakum Historical Society to give rides to children and raise money for the museum. At the request of the American Legion Post in Deep River, Badger built an Army jeep using a riding lawnmower chassis and engine. The jeep was used by the post to pull children around in a military style wagon during the Naselle-Grays River Valley community picnic celebrating the 100th birthday of the American Legion.

After completing the jeep, Badger decided it should have a cannon to pull behind. As that cannon, named Kaboom, was in the building stages, the thought occurred to him it would be fun if it could squirt water. He solved the way to do that by removing a windshield wiper motor from a junked car. With a little wiring and the installation of a switch and an onboard water container, Kaboom could squirt water almost 20-feet. It was a hit with children lining the streets at last year’s Bald Eagle Day parade.

Badger’s youngest son, George, is also a Model T fan and the recipient of his dad’s gift of the Doctor’s Coupe. In its place, Badger used a discarded riding lawnmower to create a replica of a rudder-driven 1905 Model T which he had seen in a photograph. He can often be seen driving it around the neighborhood and in the Bald Eagle Day parade. Neighbor Richard Snyder was so enamored with Badger’s 1905 Model T replica that he used an 18-horse riding lawnmower with a hydrostatic transmission as the building block for a replica of a 1903 Oldsmobile for his wife.

A miniature Model T then became a project much to the joy of the neighborhood children. A woman from Oregon fell in love with it and is now the proud owner of a Badger Model T for her grandchildren to enjoy.

Another locomotive soon came into existence from a discarded riding lawnmower along with a RR wagon capable of seating six to eight children at a time. The intent was to provide rides for children at the Wahkiakum County Fair. Since the 2020 fair has been cancelled due to concerns over the spread of covid-19, the locomotive and trailer await their next opportunity to bring joy to the lives of children. Badger has plans to install a bubble-making machine in the stack and a control switch on the dash. Due to the pandemic, these bubble machines are difficult to locate since parents are buying up anything that will catch and hold the attention of their homebound children.

Badger heats his shop with a woodstove during the late fall and winter months. That means the firewood stored in the detached garage must be carried to the shop. Putting on his thinking cap, Badger devised the creation of a dump truck to transport his wood using, you guessed it, a discarded John Deere riding lawnmower. He had to add 14-inches to the frame and the dump bed is from an old tilt trailer for a lawnmower. He loads the firewood in the dump bed, drives up to his shop and can then dump the load without leaving his seat.

On occasion, Badger needs to load his heavy generator into the bed of his pickup. It’s often said necessity is the mother of invention. In what may be his most ingenious and challenging build to date, he devised a way to create a forklift from an old Craftsman riding lawnmower.

In this build, the vehicle was turned around so that the front of the forklift was the rear of the previous lawnmower. In that way, the engine is in the rear and the larger wheels are in the front. This meant the steering was done with the back wheels. As a result, turning the steering wheel to the right had an opposite effect on the direction of the forklift. With a little ingenuity, a swing arm was created that made the rear wheel steering act the same as if it were front wheel steering.

Springs from a three-quarter ton pickup were straightened and doubled up to create the forks. Garage door railings were reinforced and used as guides for the raising and lowering of the forks. The actual raising and lowering is performed by a remote controlled 12-volt in and out powered winch from Harbor Freight in conjunction with a cable and a pulley at the top of the railings. It works like a charm and has shown it will lift 500 pounds or more up to the height needed to load items into the pickup truck bed.

Always on the lookout for unwanted riding lawnmowers, Badger’s next project is to create another Army jeep with a new twist — it will have a mower deck and be able to cut grass. Once that project is complete, it will be on to devise a lawnmower-based road grader to grade his gravel driveway. Already, he’s envisioning the use of two slide-in camper electric jacks to move the grader blade up and down and at an angle.

Dr. Fauci: This is a predictor of trouble ahead

Widow to Trump: Shame on you for my husband's Covid-19 death