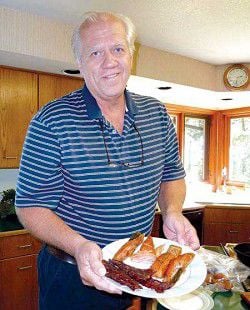 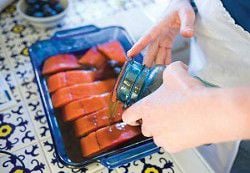 Before refrigeration was available, smoking fish and meat as a food preservative was an essential activity, a matter of survival.

Like drying, brining and pickling, these means of food storage allowed communities to take advantage of the abundance of seasonal food - salmon, berries, fresh fruit - and preserve it for leaner times.

Now, smoking your own fish, oysters, fowl or meat is an activity that has a certain haute cuisine cachet. But despite the mystic allure - and the sky-high price tags at retail outlets on smoked anything - if you have a couple of days and the right equipment, smoking your own food is something anyone can do.

A matter of style

As Ed Ketel, co-owner and veterinarian at the Oceanside Animal Clinic in Seaview, Wash., reveals, "People who smoke things have opinions."

"But, however you do it, it takes a lot of time and effort, you try different things and you screw up every once in a while."

"My dad smoked food - he used to brine fish - and I've been trying to float an egg for about 20 years and I can't do it. You'll have to tell me exactly what 'floating an egg' means - is it end up or just suspended? - I want to know."

"Anyway, people who like to smoke their own food are always trying different things because you want to get better at it. My dad wasn't very good."

"I smoke oysters and I do brine them. Lots of people use a complicated brining solution, with molasses or other spices. Mine is simple: I use a five-gallon container about half full of water. Then I put in 15 to 20 handfuls of rock salt until it floats a raw egg.

"You have to give the salt adequate time to dissolve. I put the egg in and it starts at the bottom of the bucket but pretty soon it starts to float up. Then I might throw in another couple handfuls of salt.

"But that's the traditional thing - floating an egg."

The other trick, according to Wiegardt, is not to leave the oysters in the brine too long. "I only brine them four or five minutes. Then I rinse them off. Don't forget that part."

Ketel agrees: "If you don't rinse your oysters they'll be way too salty - they just suck that stuff up."

Bette Lu Krause, co-owner of the Bay Avenue Gallery and naturalist for Lindblad Cruises, is another backyard smoker. Her brining recipe for smoked salmon is a bit more elaborate.

"I use pickling salt, molasses, brown sugar and soy in my brine," Krause says, as she feeds alder chips into the Little Chief Smoker on the porch outside her painting studio in Ocean Park. "You can strain it and reuse it if you want.

"Then I slice the salmon filet, with the skin on, into pieces of about one and a half inches. I put them all in a shallow pan with the brine for eight hours, or longer if I want the flavor to be stronger.

"Then I rinse them off, pat them dry and put them on a cookie sheet on my front porch overnight."

Ketel suggests another alternative, a dry brining process for salmon. "I just cover the filets in rock salt and brown sugar - four to five hours for fresh and two to three hours for frozen."

Whatever brine recipe is used for fish, oysters or meat, there is universal agreement that between the brining and the smoker, the product must sit - sometimes overnight in the refrigerator - until it gets "tacky" to the touch.

Talking to these smoking practitioners, one thing becomes clear: No one considers him or herself an expert - it seems that smoking is an art, not a science.

Krause cited Wiegardt as the true expert. Wiegardt cited Ketel as the "master fish smoker." Ketel named Bernie Wilson of Chinook, Wash., as one of the all-time smoking gurus.

One thing they all agree on is that alder is the wood of choice, although Ketel occasionally uses crab apple. Some smokers use "bisquettes" - Wiegardt uses the Bradely Smoker, made in Canada - which purport to be fed automatically. Some use chips, easily available at local hardware stores. Ketel buys his alder chips in large quantities from a source in Seattle.

Smokers need an energy source - either electric or gas - to keep the wood smoking; and they contain a series of racks in an enclosed compartment above the heat source.

The amount of time for the product in the smoker is as various as the chefs. A "soft smoke," as Krause calls it, will leave more moisture in the salmon; a longer smoke provides longer storage life and more flavor.

Ketel smokes his salmon four to six hours, though this varies depending on the size of the pieces. Wiegardt smokes jumbo oysters - cut into smaller pieces - for 12 hours.

Krause uses "one hour per pound" as a rule of thumb; she smokes her Bristol Bay sockeye about six hours. (She trades smoking to a friend who provides the salmon.)

Smoking is something that has been done on the North Coast for thousands of years. The bottom line seems to be to just jump in and give it a try.

But, as Wiegardt says, "Be ready to spend several days at it - between the brining, the smoking and the cleanup."

Ketel, standing next to shelves of preserved foods - pickles, smoked and canned fish, beef jerky - in his family's garage, puts it this way: "You might as well do it in large quantities if you're going to take the time. Food's fun!

"And smoking food takes my mind off everything else."

'This is like my new job': Inside the struggle to get a Covid-19 vaccine