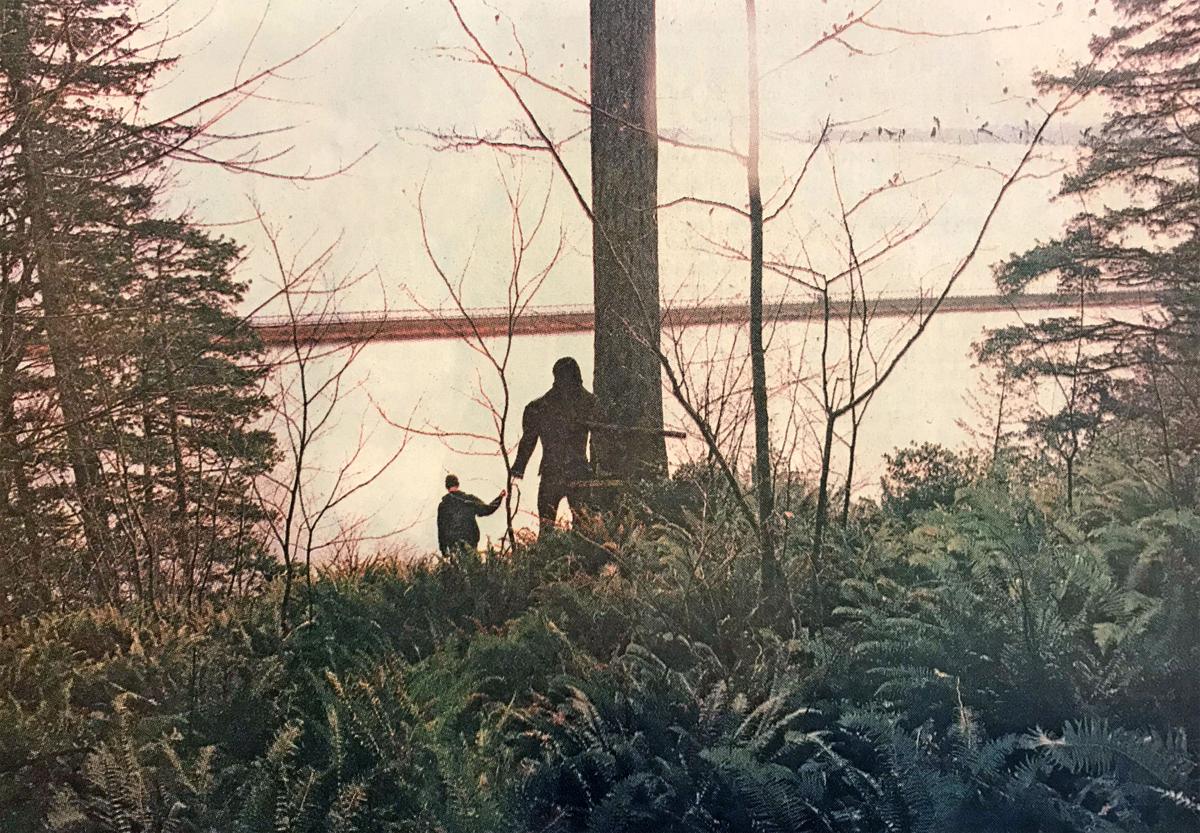 A plywood and carpet silhouette of bigfoot caught glances from passing motorists on a south Pacific County hillside a couple decades ago. 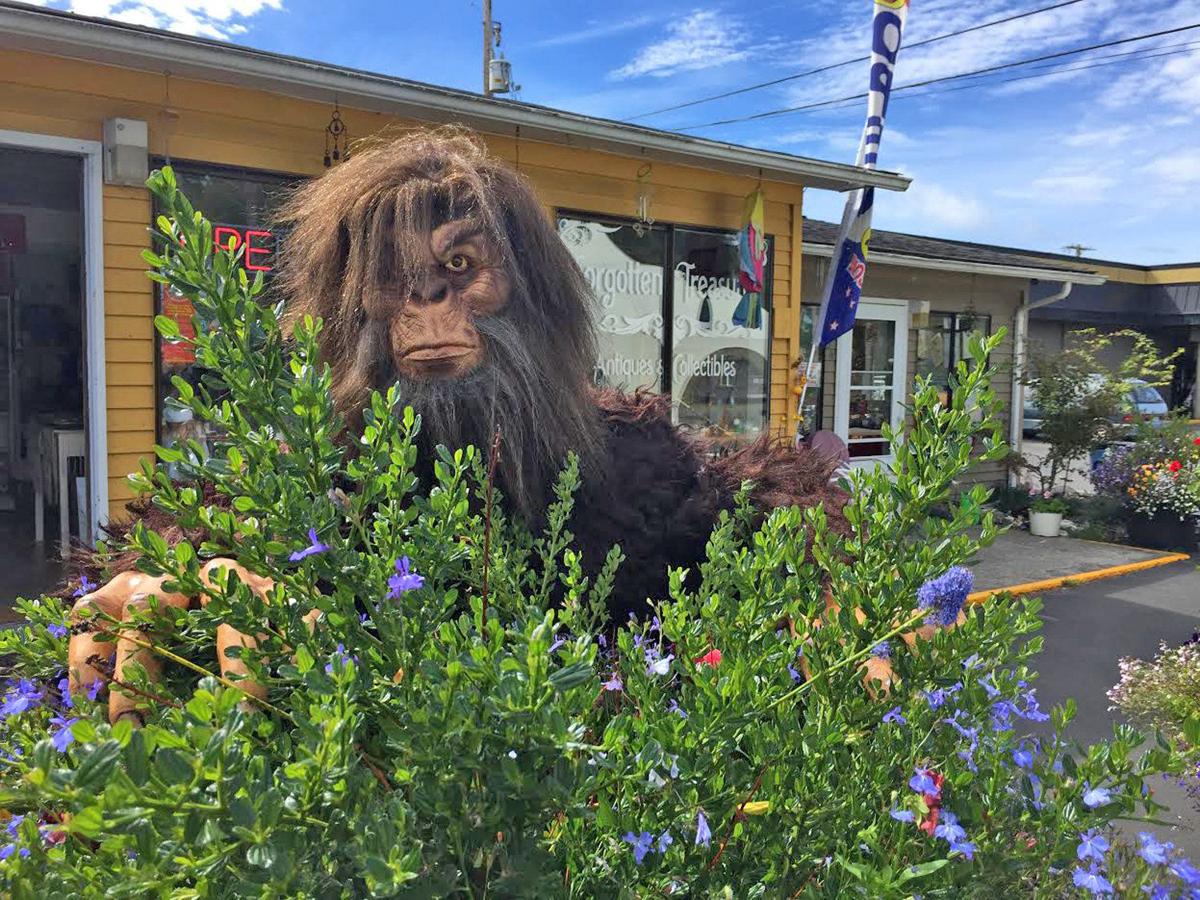 Bigfoot has become one of the most easily identifiable mascots of the Pacific Northwest, including this fine, furry fellow in Ocean Park. 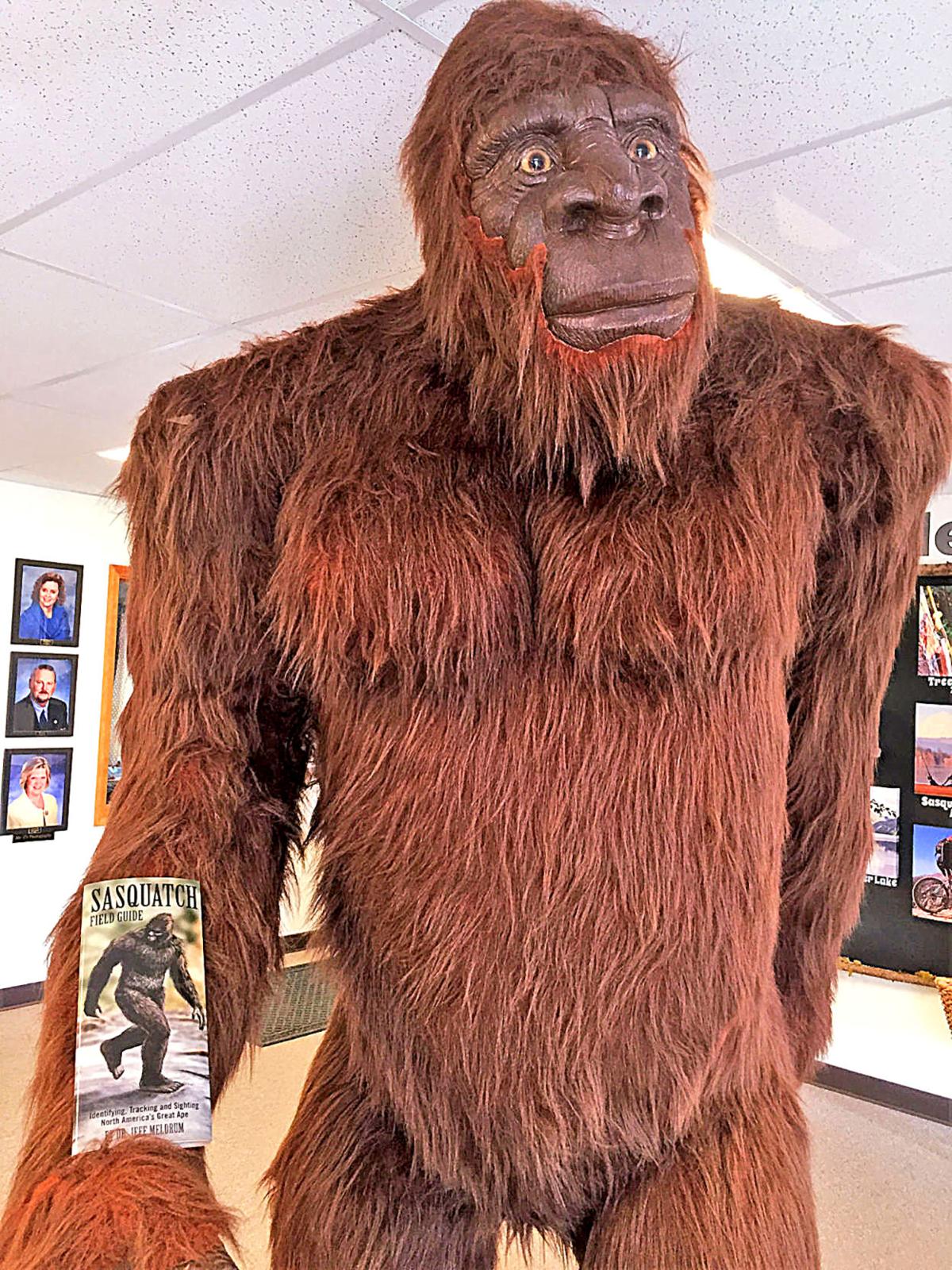 A giant sasquatch stands in the middle of the Kelso Longview Chamber of Commerce Visitor Center, just off Interstate 5 in Kelso. The forested foothills below Mount St. Helens National Volcanic Monument are rumored to be prime terrain for the legendary creature. 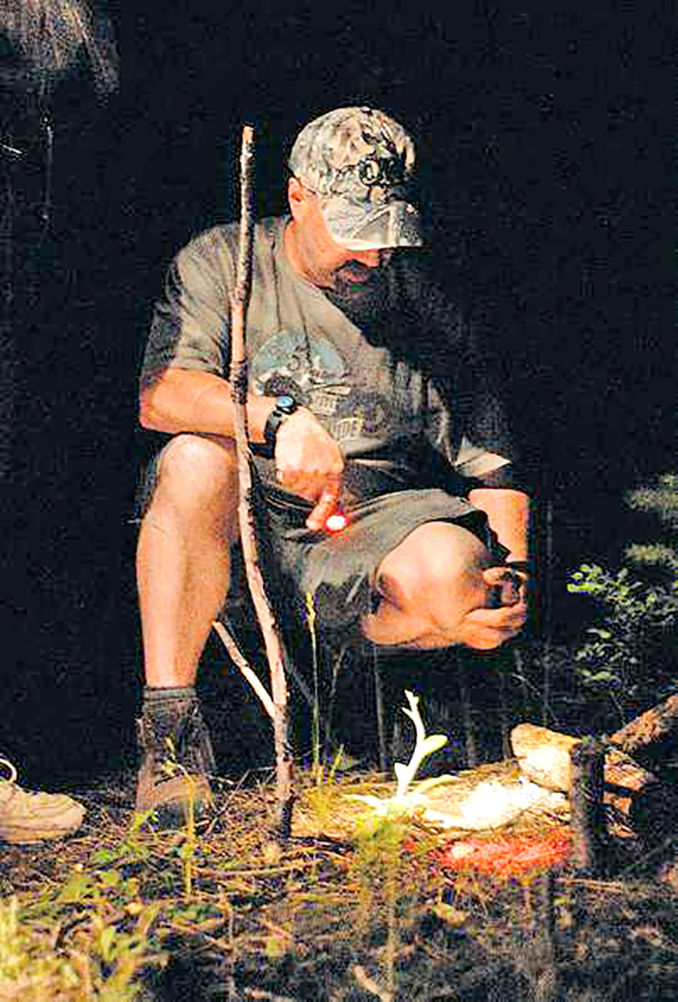 Scott Taylor of Tacoma shines a light on indentations in the ground that a fellow bigfoot seeker had found and identified as possible evidence of Sasquatch’s presence. Taylor is a participant in the Bigfoot Field Researchers Organization. 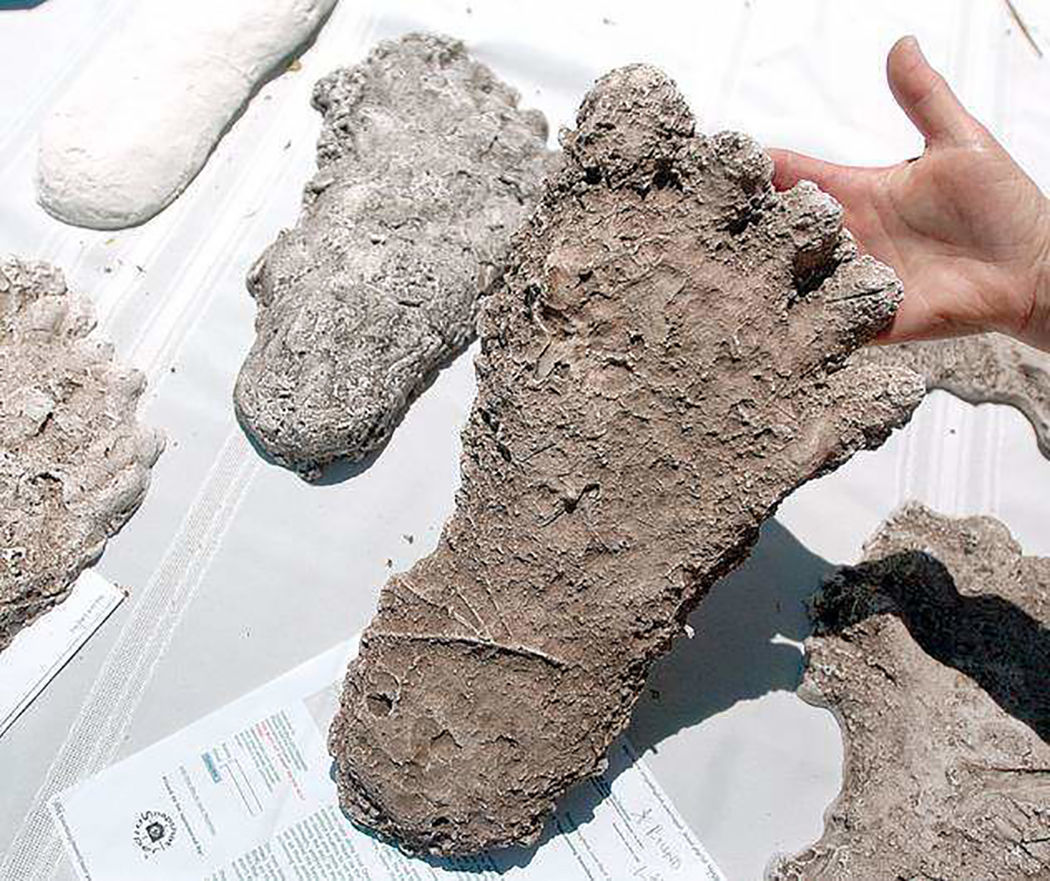 Members of the Bigfoot Field Researchers Organization have examples and copies of different sasquatch footprints, which demonstrate why the legendary creature was dubbed bigfoot. 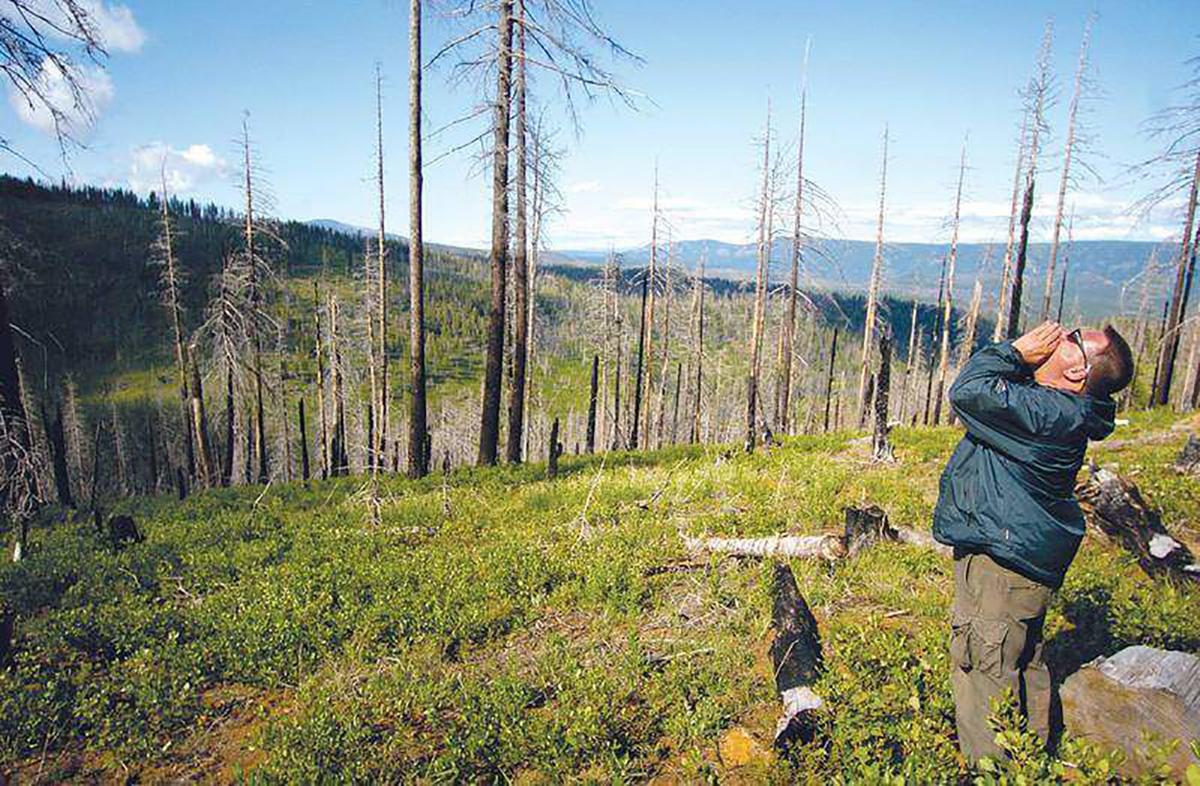 Matt Moneymaker, a leader of a Bigfoot Field Researchers Organization expedition, “howls” in an attempt to make contact with a Sasquatch in Deschutes National Forest in Central Oregon.

A plywood and carpet silhouette of bigfoot caught glances from passing motorists on a south Pacific County hillside a couple decades ago.

Bigfoot has become one of the most easily identifiable mascots of the Pacific Northwest, including this fine, furry fellow in Ocean Park.

A giant sasquatch stands in the middle of the Kelso Longview Chamber of Commerce Visitor Center, just off Interstate 5 in Kelso. The forested foothills below Mount St. Helens National Volcanic Monument are rumored to be prime terrain for the legendary creature.

Scott Taylor of Tacoma shines a light on indentations in the ground that a fellow bigfoot seeker had found and identified as possible evidence of Sasquatch’s presence. Taylor is a participant in the Bigfoot Field Researchers Organization.

Members of the Bigfoot Field Researchers Organization have examples and copies of different sasquatch footprints, which demonstrate why the legendary creature was dubbed bigfoot.

Matt Moneymaker, a leader of a Bigfoot Field Researchers Organization expedition, “howls” in an attempt to make contact with a Sasquatch in Deschutes National Forest in Central Oregon.

PACIFIC COUNTY — In 2002 the Chinook Observer’s Damian Mulinix, on one of his first professional assignments, went looking for bigfoot in the hills above State Route 401 with Eric Fremstadt of Astoria.

As I got through the first grouping of trees I could make out a figure on the edge of the hill, tall, standing next to a giant hemlock. Fremstadt approached fearlessly; I quickened my pace. As I got closer, I could see that the beast was not moving. Was he frightened by my intrepid guide? Was he communicating with him? Was he ... made of plywood?

My heart sank as I approached and saw it to be true. The creature that I had risked my life from certain death on the side of a hill on a logging road, was made of wood and old brown carpet.

”Somebody stole his mask,” said Fremstadt. “His face was an old gorilla mask.”

It was then that I found out how my guide was such an expert on this particular bigfoot — because he is the one who created him.

Fremstadt, at the urging of some of his friends, built the nine-and-a-half foot tall sculpture two summers ago. He scouted out the location well, driving by the area on his way to work at the Naselle Youth Camp. Once put together, Fremstadt hiked up the hill — twice, because he had to bring it up in two pieces — and attached it to a tree on the edge of a cliff above a landslide overlooking Hwy 401.

The “beast’s” eyes were made from red reflectors, and its “fur” was some old carpet Fremstadt got from a friend who was remodeling a house.

Fremstadt told me that his bigfoot was a big hit with many of his friends and associates, noting that many of them had made the trek up the hill to “meet” the beast. One time this even resulted in some females taking photographs with the monster in their birthday suits — for research purposes, I’m sure.

Bigfoot in our backyard

Although Fremstadt’s art project was a creation meant to amuse rather than convince, there are many other eyewitness accounts from our region telling of encounters with the Pacific Northwest’s legendary man-ape. It’s easy to dismiss these as bear sightings or the vocalizations of cougars, but it’s often obvious that these hundreds of stories are backed by sincere belief in bigfoot.

The Chinook Observer’s editor recalls a sober and serious neighbor in the old Columbia River fishing village of Altoona telling of a terrifying 1930s night when she and her friends believed they were being spied on by a monster above them in the deeply shadowed ancient forest. A descendant of the Chinook Tribe, she had no doubt that what they heard was a Sasquatch.

There are many more-recent accounts around Washington and Oregon. Even in populated and heavily logged coastal areas of Pacific, Wahkiakum and Clatsop counties, an online database maintained by the Bigfoot Field Researchers Organization (www.bfro.net) has reports from the past decade, including one from Klipsan Beach in 2011.

The witness stated that they have had numerous and regular interactions. There are four that they see regularly.

There is a younger male about seven feet tall, and fairly thin build, who they interact with most often. He is estimated by the witness to be around 500 pounds. This Sasquatch has long hair on its head, shorter on the body, a mixture of brown, red and black hair, and an ape-like nose. The facial skin is very dark.

He said that there is also a very large male, mixed colors of hair (brown, and gray/white), long on the head, shorter on the body. He has a human like nose. One time they were able to observe it next to an object of known dimensions. Later they went out and measured the height and width of the shoulders in relation to the object. This individual was comparatively measured at nine feet tall, and five feet across the shoulders. …

The female is more shy. They have only seen her silhouette. Her voice is different than the males. She is reported to smell very good, while the males smell bad. …

The witness is feeding them a variety of foods, but they seem to like peanut butter and jelly sandwiches. … While I was there, the plate was on the hood, but the sandwiches had been thrown on the ground. These sandwiches were made using white bread. Normally, the witness uses wheat bread. Evidently the Sasquatches don’t like the white bread. …

In another report, a man tells of planning to spend a night in Long Beach in July 1979, but then setting out walking toward Astoria with a friend after midnight when a party turned sour.

“We walked for miles, however we were relieved just knowing we got out of town and away from those wicked girls. Whew! So now we have walked to Ilwaco, Wa. and it’s pitch black out,” according to the witness report. “We were laughing and joking when suddenly we heard a growl that instantly stood the hairs on our neck up in a frenzy.”

Reporting on a followup interview, BFRO investigator Taylor said “He described the sound as ‘otherworldly; like it came from the depths of hell.’ It sounded like nothing he had ever heard before. They both stood there frozen for a few seconds, and then they took off running down the road. He said that he was afraid to see what it was. They ran for what seemed like miles.”

Other reports have been made in recent years from Naselle, north county, Deep River, KM Mountain and Grays River.

The Grays River report, from a hunter whose encounter was in November 1978, is especially detailed:

“The creature we both saw was at least 7 feet tall, possibly more, had bright red eyes, which kind of glowed in the near dark light conditions that we were in. This creature which turned in front of me less than 6 feet away, was a real hulk, big barrel-chested, massive arms and shoulders, and the really impressive fact was it never made a sound when it turned to leave, it just seemed to float away. It was very hard to keep calm, but I knew almost as soon as I saw those red eyes what this creature must be. I have hunted and fished this country for years and have never had anything like this happen before, but I truly wish I could see him again, and may yet.”

The BFRO database has six reports from Pacific County and two from Wahkiakum, but counties closer to the wild lands of the Olympic and Cascade mountains have many more: 43 in Grays Harbor, including one from November 2018, and 47 from Lewis County. Pierce County, which surrounds Tacoma, has the highest number of reports in Washington: 80. BFRO counts 672 reports statewide.

Oregon, with 253 reports, either has fewer Sasquatch or fewer people with excitable imaginations.

However, there is a particularly colorful account from the South Jetty observation tower just south of Cape Disappointment. The witness posted a report in 2005 concerning an incident they said occurred in the winter of 1978-79.

It was a very stormy day and the surf was high, crashing over the rocks on the jetty and pounding the beach. From the viewing tower I saw a man-like figure walk down off the grassy area onto the beach.

At first I did not think too much of this “person” out on the sands. Then I watched as the figure neared the edge of the water. It was waving its arms up and down facing the surf and the tower. There was another person on the tower with his daughter and they too saw the figure; we looked at each other with a “what the hell is that” look but said nothing and continued to watch this figure standing on the beach.

At this point I noticed a pick up truck with its lights on approaching up the beach from the south. Then the scale of the figure really struck me; it had to be a good 8 feet tall or more. The figure quickly turned and moved very fast off the beach before the truck was in range.

It did not run but rather “strode” the 30 or so yards to the dunes edge, then took one or two steps up the embankment and was gone.

I was all excited and scared on what I has just seen. I decided to go to the nearest parking lot near where the figure came down on the beach and see if I could get another look at it. As I approached the beach I became even more afraid, the wind was so strong I could hear nothing but the roar of the surf and the howl of the wind through my coat’s hood. My dog was anxious and stayed close to me.

I went to the beach and found where it came down the sand hill, the sand was all torn up from its passage. But when I discovered the hill was an easy 10 foot high, I really became fearful and decided to return to my car and leave instead of following the tracks into the grass.

The vivid picture of a sandy colored figure standing near the surf waving its arms still stays with me today nearly thirty years later.