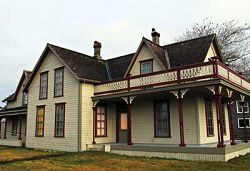 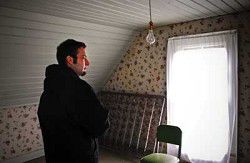 <I>Photography by DAMIAN?MULINIX</I><BR>Washington State Parks Interpretive Consultant Jon Schmidt has long been interested in the Colbert House and its history. State Parks was gifted the property in 1994.

<I>Photography by DAMIAN?MULINIX</I><BR>Washington State Parks Interpretive Consultant Jon Schmidt has long been interested in the Colbert House and its history. State Parks was gifted the property in 1994.

ILWACO - Possessing the distinctive charm of other fishing village homes nestled along the sidewalks of downtown Ilwaco, there is that one house on the corner that still manages to stand out among the rest.

Pleasing to the eye and piquing curiosity of all who see it, the two-story Colbert House has occupied the corner of Quaker and Lake streets for the past 12 decades. Serving as a local attraction in past years, the Colbert family property is reminiscent of Ilwaco's fascinating history and heritage.

Though the doors have been shut and visitor activities have ceased for the past two years, don't be fooled by perceived waning interest - this home is still highly cherished as a well-preserved bookmark in time.

According to a 1995 Colbert House historic structure report, Frederick and Catherine (Petit) Colbert settled in Chinookville in 1872. Born in Sweden in 1840, Frederick sailed the seas in his young adult years and changed his last name from Halvorson to Colbert upon arriving in the United States. Born in 1853, Catherine was the granddaughter of a Hudson's Bay Company employee and a Chinook woman, Mary Anne. The couple married in Astoria in 1870 and ran a restaurant there. Two years later they purchased and moved into a house near old Chinook near Catherine's parents, Amelia and Amable Petit, and began building a new 20-foot by 26-foot residence on site.

In the early 1880s, the couple - with five children at the time - moved their new home, by barge, to downtown Ilwaco. Frederick wanted to be part of the new fish trap fishery in Baker Bay, and Catherine looked forward to having her children - Daisy, Hilma, Elfreda, Pauline and Otto - educated at the local school.

Over the years the property was home to chickens, a cow and horses, and featured a few gardens. The house itself changed as Frederick and Catherine had three more children - Percy, Mildred and Ruby.

The 1977 Colbert House National Register of Historic Places inventory-nomination form explains, "...As the Colbert family grew in size and the complexity of Fred Colbert's salmon fishing business increased, the house was enlarged accordingly. The central portion, with its gable oriented east-west, was constructed by Colbert in the early 1870's at Chinook Point some five miles to the southeast. When the young family moved to the growing settlement of Ilwaco, c. 1883, they floated the small house by barge to newly purchased lots on Quaker Street. Several years later an addition was made on the south, consisting of a front parlor staircase and entrance hall, as well as an upstairs bedroom. A second addition to the north or rear of the house replaced an early shed kitchen, and included a dining room, kitchen, pantry and bath. Upstairs a large open workroom was created in this wing which served as a dormitory for Colbert's crew members. The dormitory is reached by a staircase which originally led from the back porch."

Washington State Parks interpretive specialist and curator Donella Lucero is currently processing items from the house and says the first addition to the Colbert House was completed in 1891, while the second addition was added around 1896.

"The appearance of the surrounding property has changed over the years," the National Register of Historic Places form states. "A stable with a hay mow and four stalls for cows and horses once stood at the northwest corner of the house. A woodshed, privy, and playhouse, as well as a garden and grindstone for knife sharpening, were also situated on the property. Presently a frame garage stands immediately to the rear of the house. Further down Lake Street near the waterfront was Fred Colbert's web shed, where the tarred, twine nets used in trap fishing were stored and mended."

The historic structure report describes the Colbert family dynamic as being very tight, as the family sat together and conversed over dinner regularly, and in the winter months they worked together to maintain and repair fishing gear. Later in life, Mildred claimed Catherine was the quickest of the bunch - and in Ilwaco - when it came to knitting nets with needles and twine. Unfortunately, fishing profits began to decline amidst the "salmon wars" and the 1894 completion of the south jetty. Shortly after, Frederick opened a livery stable at the family's Ilwaco property.

In addition to being active with local churches and other organizations, Frederick was employed as postmaster from 1910 through 1913 and served on the city council. Frederick is credited as being the last postmaster in Chinookville (present day Chinook) before the office closed in 1874. Catherine seems to have been a "Jill of All Trades" - finding work as a maternity nurse, seamstress and an undertaker. Their daughters contributed by working in salmon canneries and picking cranberries. Five of the seven surviving children went on to become teachers.

Following her graduation from the State Normal School in Ellensburg, Elfreda earned her first teaching job at Sunshine, a town near the mouth of the Naselle River. She later taught in Ilwaco.

Percy graduated from Whitworth College in 1908 and taught in Puyallup and Olympia and coached at two schools in Tacoma before becoming a chiropractor.

Mildred taught school in a logging camp in Pacific County, and later taught in Naselle along with Ruby.

After Frederick's death, Mildred, Ruby, Catherine and Hilma lived together in Portland, where Mildred and Ruby continued to teach. The group returned to their Ilwaco house in the summer months.

After her retirement from teaching, Mildred took up historical writing and wrote "Kutkos, Chinook Tyee" and was featured in the "Sou'wester" and "Oregon Historical Quarterly."

"By 1934, the front porch and west portion of the rear porch were gone," says Lucero. "The living room had been refinished in 1960 and modern electrical outlets were installed at that time ... Colbert House was gifted to Washington State Parks in 1990 through the will of Mildred Colbert. A restoration of the house by Washington State Parks began in 1995. At this time it was important to stabilize the house by constructing a new foundation. The porches were restored, ADA access was provided at the back porch by construction of a ramp. A new roof and heating system were installed. The house had deteriorated inside due to a leaky roof and lack of heat. The interior was painted and re-wallpapered and a furnace was installed making the house ready for visitors. For several years during the summer months, Colbert House was open by volunteers as a historic house. Several structural issues and lack of visitation closed the house in 2007. Capital projects funding allowed the repairs to be made and the house to be re-painted. The exterior restoration is now complete. At the present time, additional repairs need to be made to the interior of the house. The house is being preserved in hope that eventually a non-profit will come forward and be interested in operating the house as a house museum again."

In the meantime, the house's items are being carefully processed and recorded for archival purposes, which might have been a much more tedious job if it weren't for some assistance from the Colberts along the way. Lucero says they've discovered little notes on the backs of mirrors and furniture, which give a little bit of information on the piece's history. For example, some of the items were originally part of the Ilwaco Central Hotel. Many of the family's belongings have been featured in temporary exhibits at the Lewis and Clark Interpretive Center and Fort Columbia.

The house is listed as a Washington State Parks Heritage Site and is on the National Register of Historic Places.

"I look at Colbert House as a window of time for Ilwaco, or for any town for that matter," says Lucero. "It's the historical identity of Ilwaco and it looks the same as it did in 1900."

For more information about the Colbert House, contact the Long Beach Area State Parks office at 642-3078.