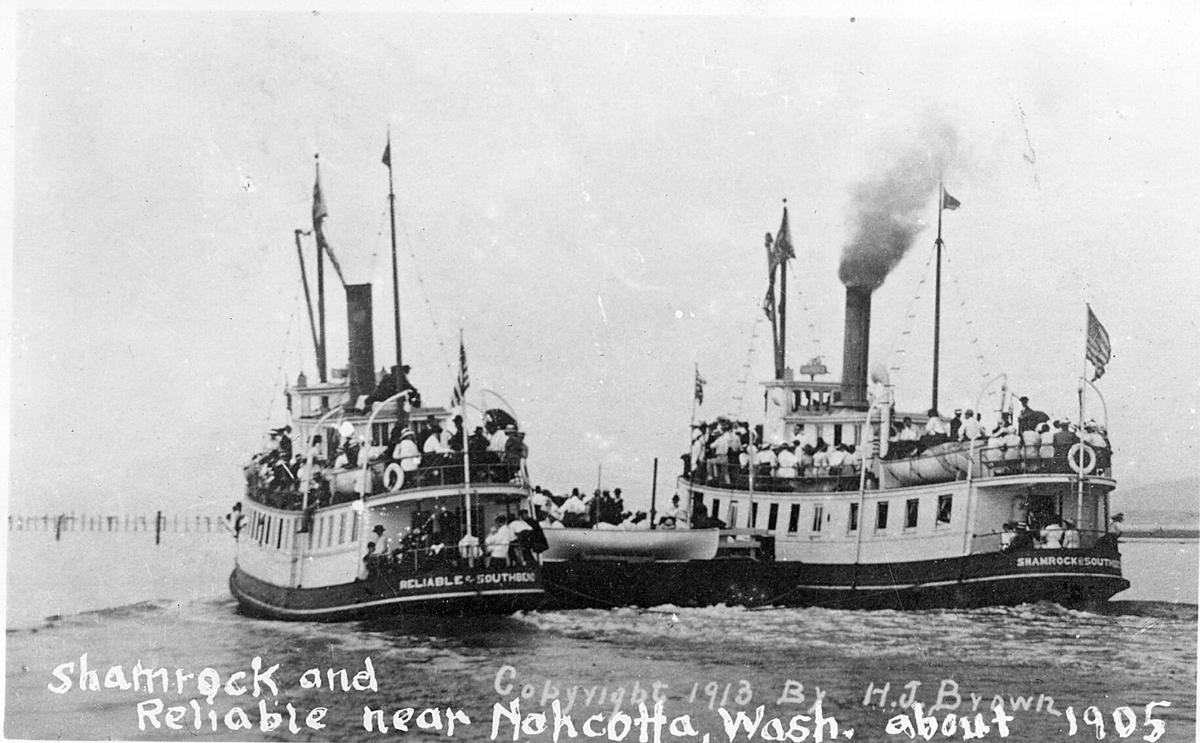 Built in 1902, the sister steamers Shamrock and Reliable were typical of the small launches that carried passengers, freight, and mail between communities around Willapa Bay in the years before reliable road or rail transport was possible. 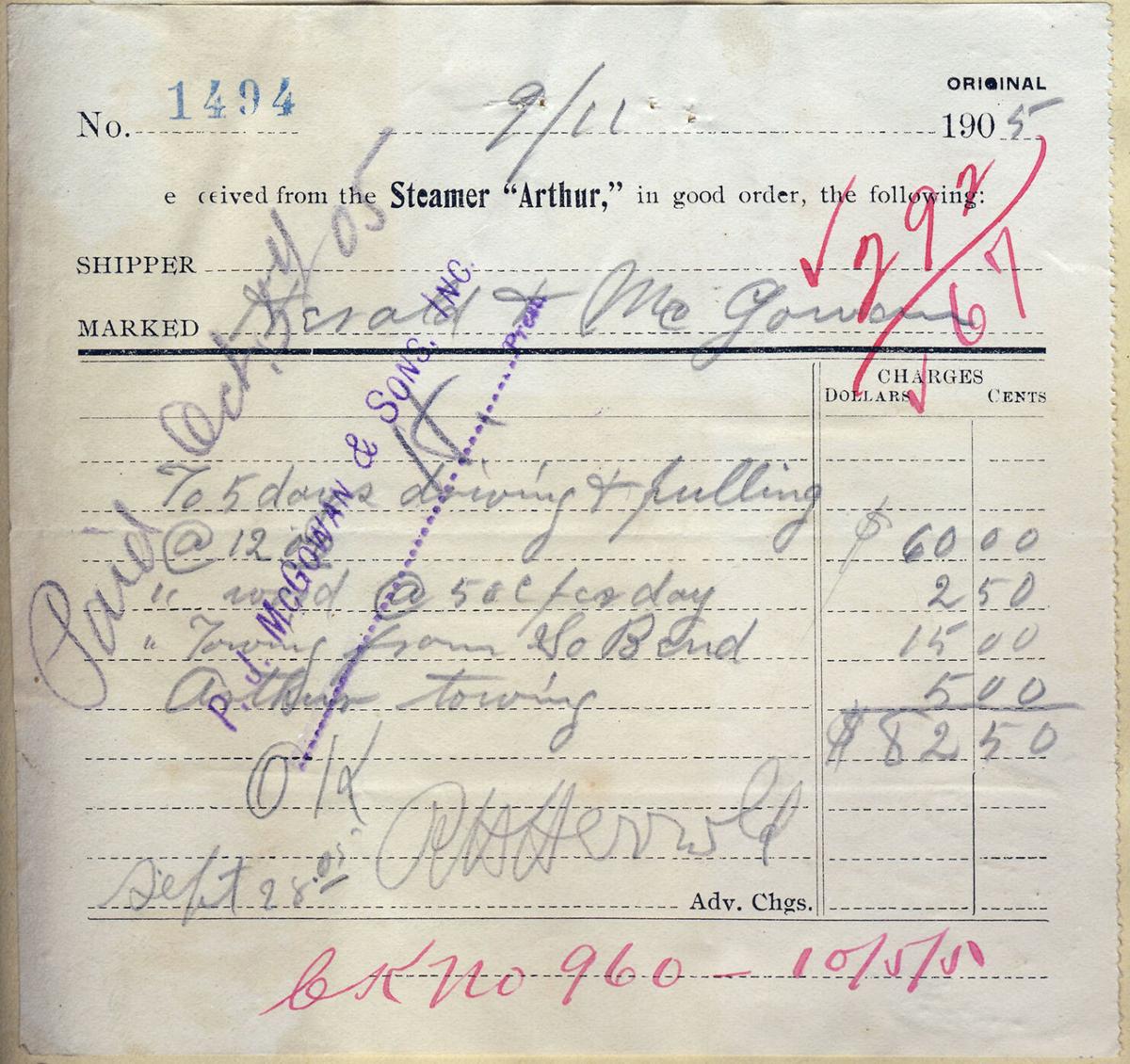 Th Arthur was one of several small steamboats that delivered mail and performed other functions in Willapa Bay around 1900. This bill reflects work for the firm of McGowan and Herrold in 1905.

Neither snow nor rain nor heat nor gloom of night stays these couriers from the swift completion of their appointed rounds.

Although the U.S. Postal Service has no official motto, the popular belief that it does is a tribute to America’s postal workers. The words above, thought to be the motto, chiseled in gray granite over the entrance to the New York City Post Office on 8th Avenue, actually come from The Histories, Book 8, Paragraph 98, of “The Persian Wars” by Herodotus.

In the first century of Pacific County’s history, the mail was most often carried from place to place by boat, for in this watery region in the corner of Southwest Washington, there was little other choice of transportation. Pacific County’s last “mail boat” run occurred on Jan. 31, 1948.

A few weeks beforehand, Postmaster J.E. Dorman of South Bend had been notified by postal authorities that on that date the South Bend-Tokeland mail service would be discontinued. According to an article in the South Bend Journal: “Until the Raymond-Tokeland road is built providing truck transportation, mail between Tokeland and the county seat will travel in a round-about way through Aberdeen and Grayland.” Completion of that road, Highway 105, would not take place for another 16 years!

The article went on to explain that for the past several years, the daily mailboat service between South Bend and Tokeland had been handled by Capt. Ward Spooner, whose contract called for the payment of $2,800 per year for the service. The termination of the service put an end to the last of the mail boats that had once been the county’s principal method of the postal delivery.

In pioneer days, almost all mail in and out of the county was transported by water. Mailboats supplied regular service to and from South Bend, Willapa, North River, Astoria, Portland and San Francisco, as well as to Nahcotta and Bay Center. Within Pacific County, small sailboats called “plungers” carried most of the mail. One exception was the stagecoach run along the Peninsula’s weather beach, replaced in 1889 by the Ilwaco Railroad and Navigation Company’s train from Ilwaco to Nahcotta.

Mailboat captains were known for their seamanship as well as for their detailed knowledge of the bay. Dorothy Trondsen Williams’ tells a story about her great-grandfather, John Brown, who had arrived in Bruceport 1872. He delivered mail to all the settlements on the bay, the first two years using the little sailboat locals called a “plunger” and, later, by the steamers Garfield and Montesano.

Brown’s daughter, Lizzie (who was to become Dorothy’s grandmother) often spoke about her father and his expertise on the bay: “Captain Brown was master of the steamer Garfield. The steamer was a teapot of an affair as far as boats are concerned, and on this special trip the fog was so thick that the bow of the boat could not be seen from the wheelhouse. After running by dead reckoning for a time, Captain Brown told the mate, Charles Nelson, to go out in a small boat and get some mud from the bottom of the bay as they were in a shoal spot.

He did so and Captain Brown promptly said that they were off Mrs. Lucy Johnson’s house at North Cove. He landed his passengers there and they were cared for by Mrs. Johnson with that warm-hearted hospitality which has always distinguished her.”

From 1886 to 1906 small launches like the Naselle, Lassie, Arthur, and Edgar, and later, steamers like the Shamrock and Reliable, were making regular scheduled stops on Shoalwater Bay at South Bend, Bay Center, North Cove, Nahcotta/Sealand and Sunshine bringing passengers, mail and other freight all points around the bay. Completion of the Ocean Beach Highway in 1925 ended all the mailboat runs except that between South Bend and Tokeland which was continued for a time by steamer, later by motor ferry and, finally, by motorboat.

Once upon a Time in Pacific County: Dreams and schemes that never quite came true

As the last decade of the 19th century rolled into view, the recently platted towns of Sealand and Nahcotta on the North Beach Peninsula were …