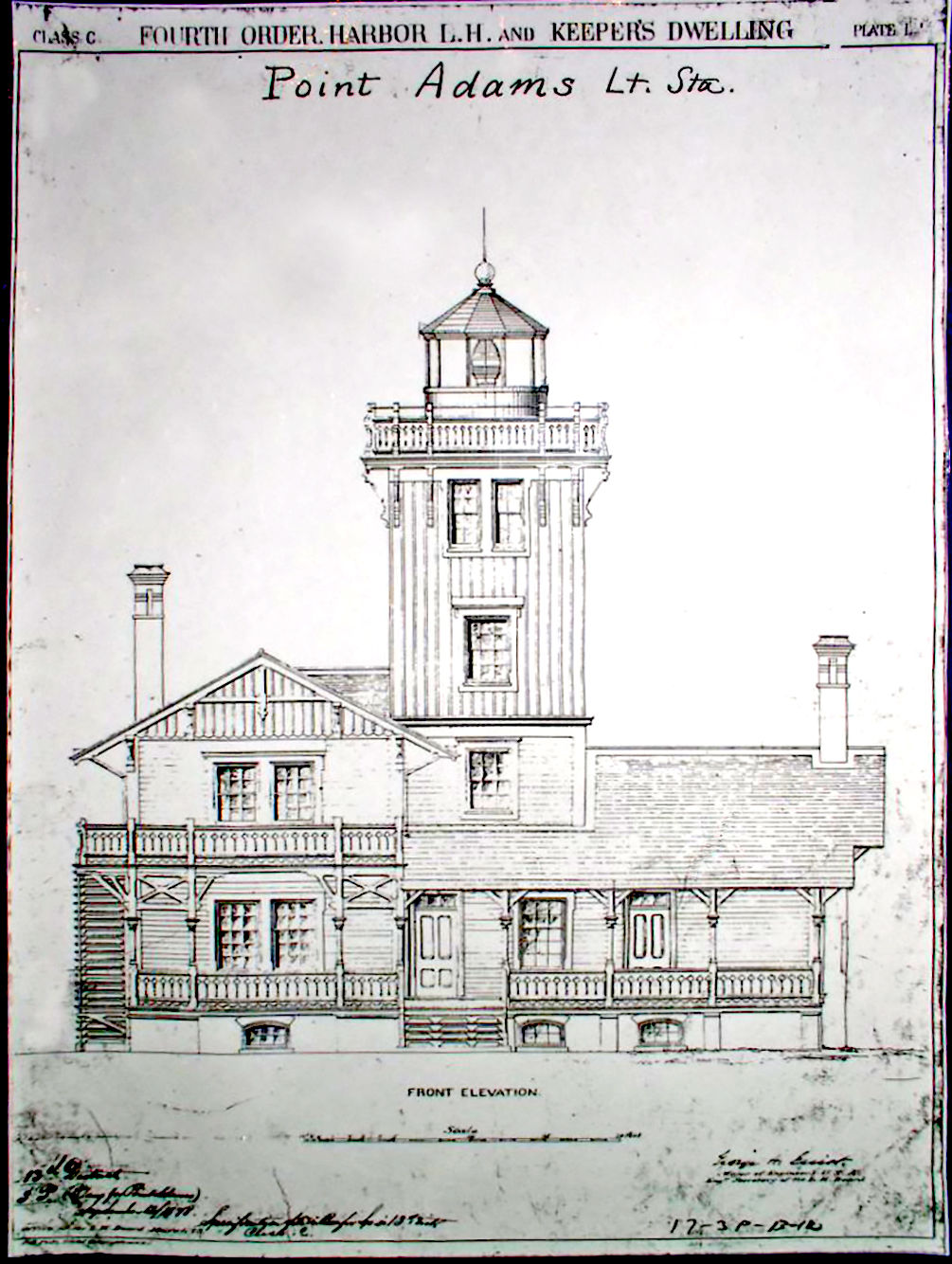 An architectural drawing shows the original design for Point Adams Lighthouse, completed in 1875, burned down in 1912. It was intended to guide ships away from Clatsop Spit and into the entry of the Columbia River. 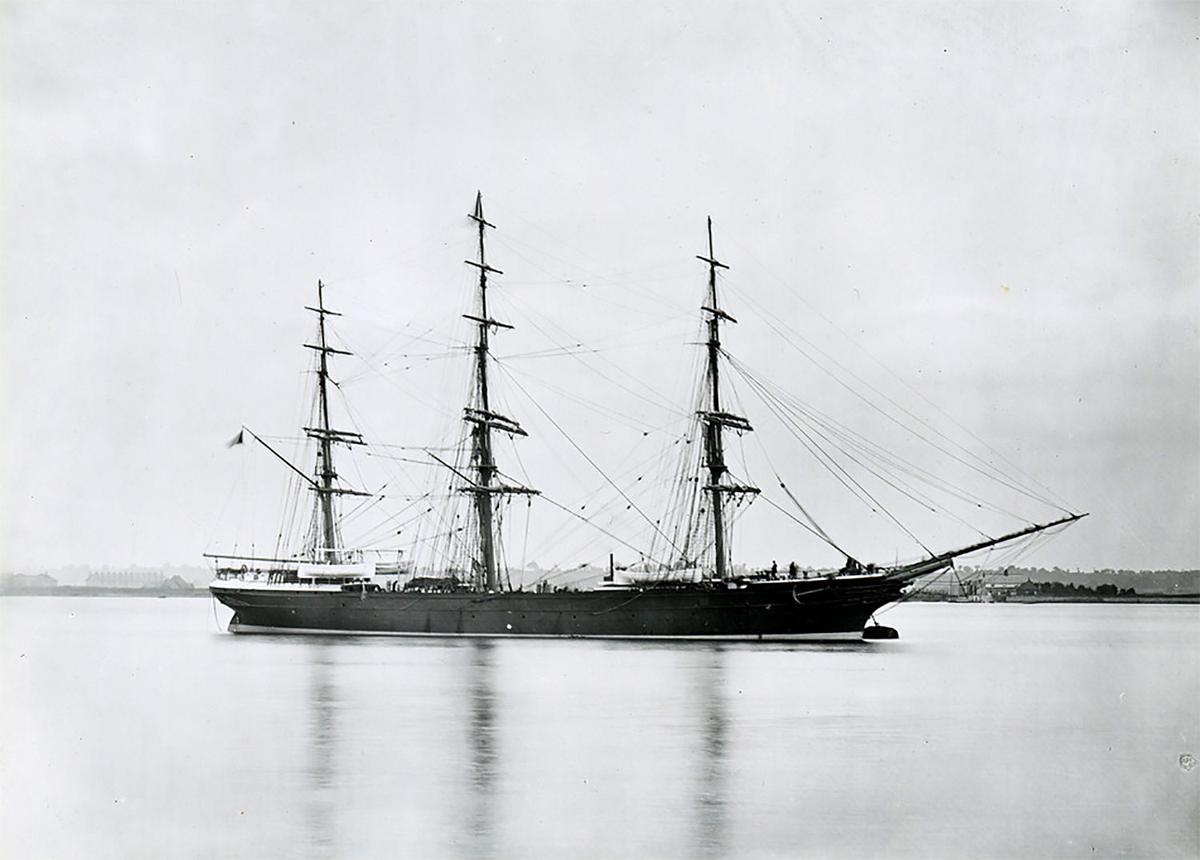 The iron ship Fernglen, 818 tons, was photographed moored at Gravesend, U.K. “From the time of her launch until 1881 under charter to New Zealand Shipping Company and carried many migrants to New Zealand,” according to the Library of South Australia. The ship was destroyed on Clatsop Spit in 1881, while bound for Wellington, New Zealand. 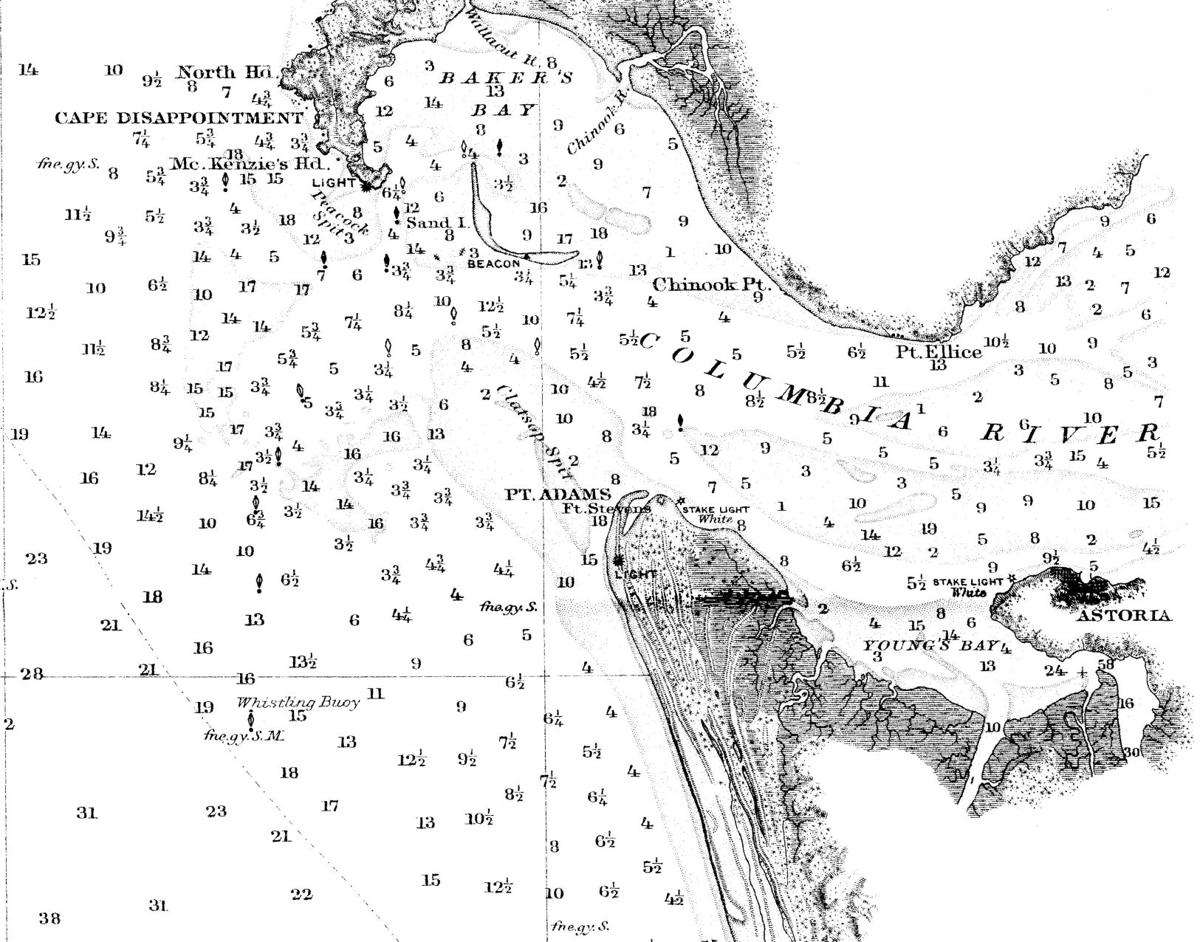 Clatsop Spit at the south channel of the Columbia River, charted here in 1884, was fraught with danger for sailing ships. 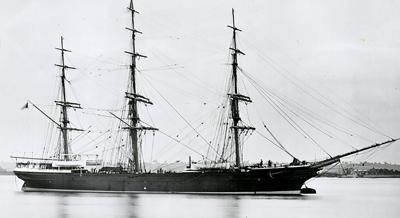 When we drive north over the Astoria-Megler Bridge at dusk and look off to our left at the colorful evening sky, the Cape Disappointment Light blinks at us. Its distinctive white-pause-red-pause repeat flash pattern is a characteristic of that light. Each lighthouse has an individual signature flash color and timing pattern by which boats at sea can identify it.

By the 1870s the federal Lighthouse Board understood that the region of the Columbia River needed more lighthouses than just Cape Disappointment (1856) and Shoalwater-Willapa Bay (1858). The next lighthouse they would build, in February 1875, would be on the south shore of the Columbia River at Point Adams. It was a charming wooden Victorian building housing the keeper’s quarters and the light room. The light itself was a fourth-order Fresnel which originally flashed between red and white.

'Being a stranger to the Columbia river entrance, and having no reliable charts to guide him, he did not use the lead [to measure depth of water] when he saw the red light at Point Adams.'

Board of inquiry into the 1881 wreck of the Fernglen

In 1881 Point Adams’ flash pattern was changed to solid red so it would not be confused with the soon-to-be operating Tillamook Rock Light to its south; its flash was to be white every five seconds. While the Lighthouse Board issued a “Notice to Mariners” every time they made a change, the word was often slow to reach the captains far away at sea in the days before radio.

Unfortunately, that change is credited with causing the British vessel Fernglen to ground.

On Oct. 19, 1881, the Morning Astorian reported, “the British bark Fernglen which went ashore on Clatsop spit last Sunday morning is a total wreck. … The following is Capt. Bubb’s account: ‘We sailed from London for Wellington with passengers on the 1st of May. Made a very good passage and left Wellington on the 22nd of August.

“ ‘Arrived off the bar at 4 o’clock last Sunday morning; made Hancock [Cape Disappointment] light and was puzzled, saw a red light and expected to see a red and white flash; took bearings and thought I was in good position, being sufficiently far to windward, then wore ship to stand off till daylight, when I could make the bar and pick up a pilot.

“ ‘About six o’clock found the ship striking and a very strong tide, of which I was not aware, setting us in. About 3 p.m., the life boat came alongside, and the Capt. told me that he thought there was no danger; that she would probably drive over the sands, so determined to stand by the ship.

“ ‘The vessel lay tolerable easy all Sunday night, but on Monday I found that she had worked astern; I got the steam winch ready and hove out ballast. About 4 o’clock she commenced leaking and I then made preparations to leave. At 7 a strong wind blowing from the S. E. and the ship striking heavier, let go both anchors.

“ ‘She bumped heavily all night; I got out starboard lifeboat, but could do nothing; she stove almost immediately; at 9 o’clock Tuesday morning the ballast shifted, the vessel laid over on her beam ends, with her masts in the water. All hands clung to the ship’s side; I saw the life boat trying to get to us, but the sea ran so high it was impossible. About 10 o’clock she began to break amidships, and at noon, seeing no other chance, and finding we must make some effort, we launched the only boat we had left and after great effort were taken on board by the Columbia.’

“The crew, some twenty in number, saved nothing, and were fortunate in escaping with their lives, for it was a rough day outside. The vessel, which now lies southwest of Fort Stevens, is fast breaking up.”

The next day the paper added, “the captain and mate went down to see if there was any chance to save anything, but with little success. Considerable surprise was expressed that an iron ship should break to pieces the way she did, but it was simply a strain. When she keeled over, probably the sand worked away from under her bow and stern, leaving her on a pivot, when her own weight tore her apart.”

A month later, in mid-November, 1881, The Washington Standard of Olympia wrote, “A court of inquiry, which met in Portland … lays all the blame of the wreck of the Fernglen and the Lammerlaw, to the Captains of those vessels. The latter, it is found, committed a “very grave error of judgment in standing in towards the light at night,” as it “would have been common prudence to have kept off till daylight.” The Captain of the Fernglen is censured and his license suspended for four months, because “being a stranger to the Columbia river entrance, and having no reliable charts to guide him, he did not use the lead [to measure depth of water] when he saw the red light at Point Adams; that if he had taken this customary precaution he would have seen how fast he was drifting in, and in what direction.“

As for the loss of the Lammerlaw, mentioned above, the Sacramento Daily Union reported it this way: “Portland, November 2d. [1881] … The British bark G. Broughton, coal laden from Brisbane, went ashore at Leadbetter Point, Shoalwater Bay, yesterday and lies high and dry at low water. She is in an easy condition in a sheltered position. The crew is aboard. The captain came overland to Astoria to get assistance. … She is owned by P. Iredale, Liverpool, and consigned to Henry Hewett & Co., of this city.

“The same day the British bark Lammerlaw, coal laden from Newcastle, N. S. W., sunk six miles north of Shoalwater Bay. The captain, who was injured, and crew were saved, and are now at South Bend. The absence of telegraphic communication prevents getting particulars.”

Three days later, the Morning Astorian added, “the wrecked Lammerlaw had nothing but her mainmast above the sands last evening and by this time has disappeared. Capt. Payn[e], of the Broughton, left here for his vessel yesterday, hoping to be able to save her, but the southeaster that blew up at noon, threw her on her beam ends, and at six o’clock last evening the tide was dashing over her; she is a total loss. The wrecks lie at the entrance to Shoalwater bay, about six miles apart, and some forty miles from Astoria.”

Sacramento’s Record-Union newspaper said, on Nov. 12, 1881, “A Court of Inquiry, consisting of James Laidlaw, British Vice-Consul, Captain Jarvis, of the British ship Thunderbolt, and Captain Johnson, of the British ship Trafalger, to-day rendered a finding: First, that the Lammerlaw, which was wrecked October 30th, was lost through an error of the Captain in mistaking the Shoalwater Bay lighthouse [which exhibited a flash characteristic of a fixed white light with an additional white flash every two minutes] for that on Cape Disappointment [which, in those times, exhibited an unbroken fixed white light with no flash]; second, that he committed a grave error in standing in toward the light during the night, when common prudence would have prompted him to keep off till daylight. In the investigation of the wreck of the Fernglen on Clatsop Spit, the Court charged that the loss was attributable to the carelessness of Captain Bubb, who did not stand off when he saws Point Adams lighthouse, and when he hove to did not use the lead. They suspended his license. The second mate was severely censured for gross incompetency and neglect.”

“In the case of the Great Broughton, the court of inquiry, which finished its work Friday afternoon, found in accordance with the facts of the case as reported at the time, and returned to the master and officers their certificates.” The Morning Astorian, Nov. 20, 1881.

These vessels were in for wheat shipments out of Portland. They were coal-mine canaries of a complicated navigational dilemma extremely difficult to modify.

The Lighthouse Board continued to build lighthouses in the vicinity — Cape Meares (1890), the Columbia River Lightship (1892), Grays Harbor (1895), Desdemona Sands (1901), and North Head (1898). The Corps of Engineers continued to build jetties — South Jetty extension, North Jetty, Jetty “A” — in an effort that would continue 50 years the first time around, and into the present as they repair them.

Sir Edward Belcher was, if anything, rather modest in his long-ago assessment of the mouth of the Columbia River as a “nest of dangers.”

This Nest of Dangers: Sidebar — The U. S. Life Saving Service and the Fernglen

The official U.S. Life Saving Service report of 1883 tells a story about the wreck of the Fernglen which differs considerably from that of Cap…

These are the problems with Covid-19 testing accuracy