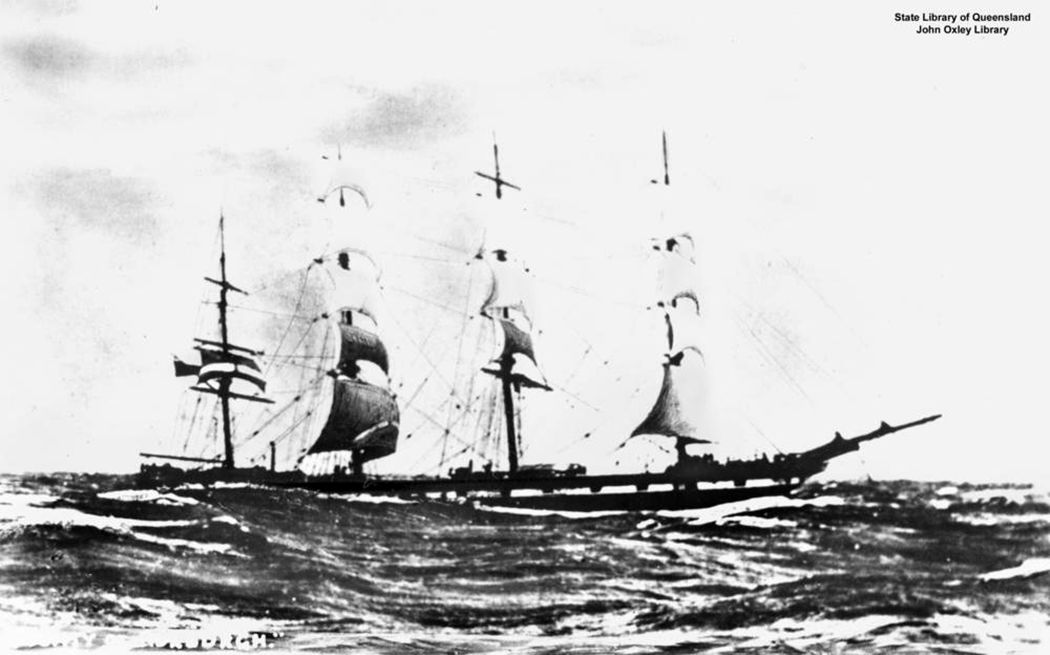 The County of Roxburgh, an elegant four-masted merchant ship that sailed all over the world, has its own website: www.county-of-roxburgh.com. 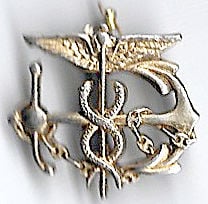 The U.S. Public Health Service logo shown on this old lapel pin demonstrated the agency’s original mission of dealing with illnesses that arrive by ship. 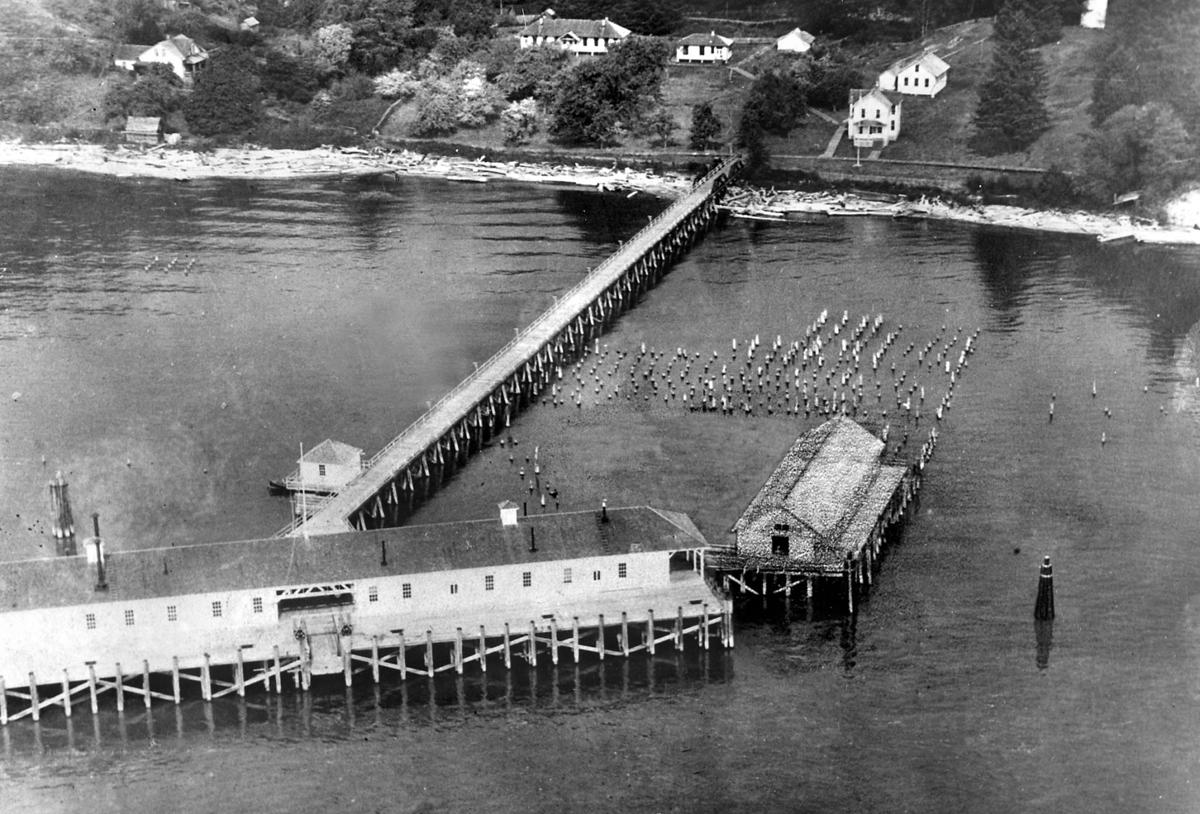 In the first half of the 20th century the U.S. Quarantine station in Knappton — at the time an isolated encampment across the Columbia from Astoria — protected Americans from shipborne infections. In our time, nothing but a few pilings remain of the facility’s once-extensive over-water buildings.

The British ship County of Roxburgh arrived in Astoria in 1902 with ballast suspected of being contaminated with cholera from Shanghai, China.

Notice to Pilots and Ship Masters

“Every Pilot or Ship Master who shall bring into the port of Astoria any ship or vessel having on board any persons or goods infected with Small-pox, Cholera, Leprosy, or other contagious diseases, or which shall have had on board any such infections during the voyage, or which he suspects, from the bad sanitary condition of the vessel may be capable of propagating disease, shall anchor such ship or vessel below Smith’s Point, and give immediate notice to the Health Officer. In any violations of the foregoing regulations the law will be strictly enforced. S. W. DODD, M.D. Health Officer, Astoria.”

As can be the way with research, subjects sometimes harmonize. Several items have recently struck home:

“Last evening,” read the Morning Astorian in January 1895, “the British bark County of Antrim, in ballast from Rio de Janeiro, was towed into the harbor and anchored below the Seaside cannery. Boatman Bradford went aboard of her as soon as she dropped her anchor, and was told by the captain that on the trip up one of the crew was down with the small-pox, but had eventually recovered.

“Upon hearing this, Mr. Bradford, who is boatman for the health officer, advised the captain not to let anyone go ashore until after the health officer visited the bark. He at once notified Dr. Walker, who deputized him to return and place the vessel in quarantine until this morning, when he will personally visit the bark.”

Two days later, the Morning Astorian reported, “The small-pox flag was raised over the British bark County Antrim Sunday morning, and no one is allowed on the vessel … Pilot McVicker, after taking a hot bath and donning a complete change of clothing, was allowed to land yesterday.

“The vessel will be thoroughly fumigated, and in speaking yesterday of the disinfectants to be used, Dr. Walker said: ‘It will take from 100 to 200 pounds of sulphur, and ten barrels of 1 to 1,000 parts solution of corrosive sublimate.

“ ‘With the latter the whole vessel will be carefully washed, and even the ballast thoroughly disinfected. All the old clothing that is liable to contain a germ of the disease, will be burned, though I shall save all that is possible.

“ ‘Four pounds two ounces of sulphur dioxide will be burned to every 1,000 cubic feet of space on the bark.’ It will be two or three days before the job of disinfecting is finished, after which the vessel will be taken up the river.”

In that same issue, the newspaper added, “Health Officer Walker deserves thanks from the entire community for his prompt and thorough precaution against possible contagion from the ship County Antrim. While he feels pretty well satisfied there is little danger, he yet deems it best to enforce the usual rigid quarantine measures, to the end that all possible public apprehension may be effectually quieted.”

A few days later, another vessel came in with small-pox aboard. “Health Officer Walker had his hands full yesterday looking after a small-pox vessel, the British ship Grassendale, which arrived in 66 days from Valparaiso in ballast.

“On Dec. 2, fifteen days after the Grassendale left the South American port one of the crew showed a pure case of varioloid. He was able to resume work on the 22d of the month, and aside from this the vessel shows a clean bill of health.

“Pilot Staples brought the vessel in and anchored her below the Seaside cannery. Soon after Customs Officials Campbell and Peterson and Boatman John Reid went aboard. Soon after Health Officer Walker arrived in the scene, and learning of the case of varioloid, placed the vessel under quarantine.

“No one was allowed to leave the ship until evening, when a complete change of clothing was sent off to the customs officers, and they were permitted to come ashore. Boatman Reid is still on board. The ship will be thoroughly fumigated before being allowed to proceed up the river [to Portland].

“The County of Antrim will probably be released from quarantine today. Yesterday the entire crew, with one or two exceptions, were vaccinated by the health officer, but not without a great deal of persuasion on the part of the officer.

“Tuesday the vessel was thoroughly washed with the sublimate solution, and all the crew’s clothing, blankets, etc., were placed on the lines in the hold, the hatch battened down, and from 300 to 400 pounds of Sulphur burned. This was kept up for 48 hours before the hatch was removed.

“Tuesday night was a memorable one to the crew, and it is safe to say that they do not care to spend another like it. Without blankets or bedding, they were forced to spend the night, inhaling the sickening fumes of the burning Sulphur, and when morning dawned, there was scarcely a man aboard who was not ready to desert the ship. They refused to obey the mate’s commands, and an encounter followed, in which the mate was badly used up.

“So much for not having a quarantine station at this port, where such cases could be properly handled.”

Small-pox was a rapidly spread, fearsomely infectious illness said to kill three or more persons out of every ten who contracted it. It has bedeviled the world since before the times of Egypt’s pharaohs.

Down through the centuries, different cultures came to understand that vaccination would protect people. According to the World Health Organization, by concentrated and relentless world-wide efforts, the disease was eradicated just forty years ago.

The principle of quarantine — “separating and restricting movement of people who have been exposed to a contagious disease to see if they become sick,” (says the National Centers for Disease Control) — is an old one. The first quarantine station in the U.S. was built in Philadelphia in 1799. The illnesses which required isolation and fumigation were cholera, small pox, yellow fever, leprosy and bubonic plague.

Until 1900 in our corner of the nation, vessels and individuals requiring quarantine had to sail north to the nearest station which was near Port Townsend. That 300-mile-trip out of their way was mightily inconvenient, and by that time the Columbia River was receiving so many immigrants and vessels coming from foreign ports that a local quarantine station was required. The Knappton Cove station was opened in December 1900.

Pacific County historian Larry Weathers once described the quarantine process: “For several decades the routine of ship quarantine on the Columbia remained essentially the same. Ships crossing the bar anchored at the Port of Astoria. An inspector went aboard and checked for infestation and communicable disease.

When quarantinable problems occurred the ship was sent immediately [across and up river] to Knappton Cove for fumigation. At the cove the ship was moored to the old [Eureka and Epicure Packing Company salmon] cannery wharf, passengers disembarked and fumigation commenced. Fumigation was accomplished by burning sulphur in pots throughout the ship. Immigrants bunked on the U.S.S. Concord, a decommissioned veteran of the Spanish-American War … They showered in the remodeled wharf buildings. Their clothing and baggage were deloused in huge retorts nearby. Diseased persons were kept in isolation. When the hospital building on shore was finally completed in 1912, isolation cases were kept there for observation. Fumigation of a ship required 48 hours. It was a brief inconvenience.”

It is that hospital building, known as the “lazaretto” or the “pest house,” which remains on the grounds, and today houses a small museum. The Columbia River Quarantine Station at Knappton Cove served as a mini-Ellis Island of this Pacific Northwest district and welcomed thousands of immigrants from Asia, Europe and South America.

Between the world wars, changes in fumigation and infectious disease inoculation, plus the curtailing of foreign immigration lessened the need for this station. It was closed in 1938 and its responsibilities transferred elsewhere.

In 2012, Knappton Cove Heritage Center developer and director Nancy Bell Anderson organized a centennial celebration for the station. U.S. Public Health Service Assistant Surgeon General Rear Adm. Patrick O’Carroll came west and spoke at that event, “Quarantine is something we’d better not forget how to do … Diseases are spread person to person, and can be interrupted by just separating people … quarantine isn’t about the protection of one — it’s about the protection of many. And that’s what public health seeks to do.”

In the meantime, at the turn of the 20th century, the Quarantine Station was kept busy. In October 1902, for instance, “the British ship County of Roxburgh, which arrived yesterday from Shanghai is still in quarantine and it is not yet known when she will be released from it,” reported the Astoria Daily Budget. “While the vessel was at Shanghai one of her sailors died of cholera … and the ballast she took on there was soft mud from the river bottom. Her consular bill of health there states that the health of those on board was good, but that the ballast was dangerous. This latter fact has caused Dr. Earle, the government quarantine officer, to consult the authorities at Washington [D.C.] before he permitted the vessel to enter. … All those on board the ship are in good health.”

Three days later, the Budget reported, “the British ship County of Roxburgh will be taken across the river to the quarantine station sometime today and the work of removing the ballast and freeing it from possible infection will be commenced.

“Captain Leslie was permitted to come ashore yesterday afternoon to attend to some business, which included procuring the necessary articles to assist in removing the ballast.

“This work will be done by the crew with hand winches and it is expected that it will be completed within three weeks. As the ballast comes out it will be sprayed with a solution of acid of bromide of mercury which will kill any cholera germs that may exist in it.

“Of the 1,000 tons of ballast there is about 100 tons of rock which was taken on board before the vessel reached Shanghai. This will be placed back again after being fumigated, and together with a few tons of rock from the beach near the quarantine station, the vessel will be able to proceed to Portland to load … The work being done in this way by the crew, the expense to the owners will not be anything like as great as at first expected, the delay being the principal loss.”

A new royal baby! Everything we know about Lilibet Diana Mountbatten-Windsor

Cary Grant: The life story you may not know