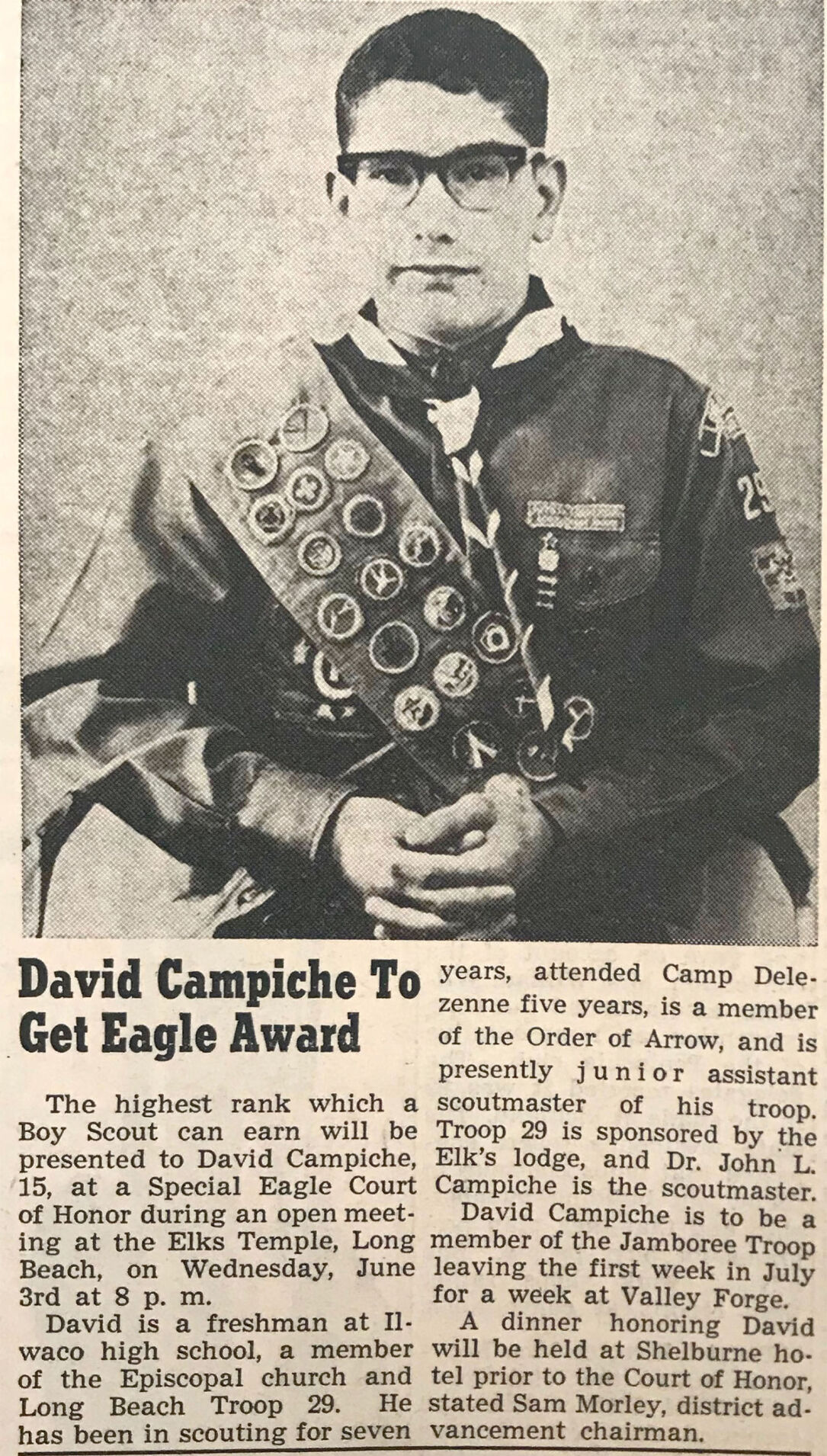 Along with sports, Scouting was an important part of growing up on the peninsula in the 1960s. Gawky freshman David Campiche would soon be navigating through the social minefield of Ilwaco High School. 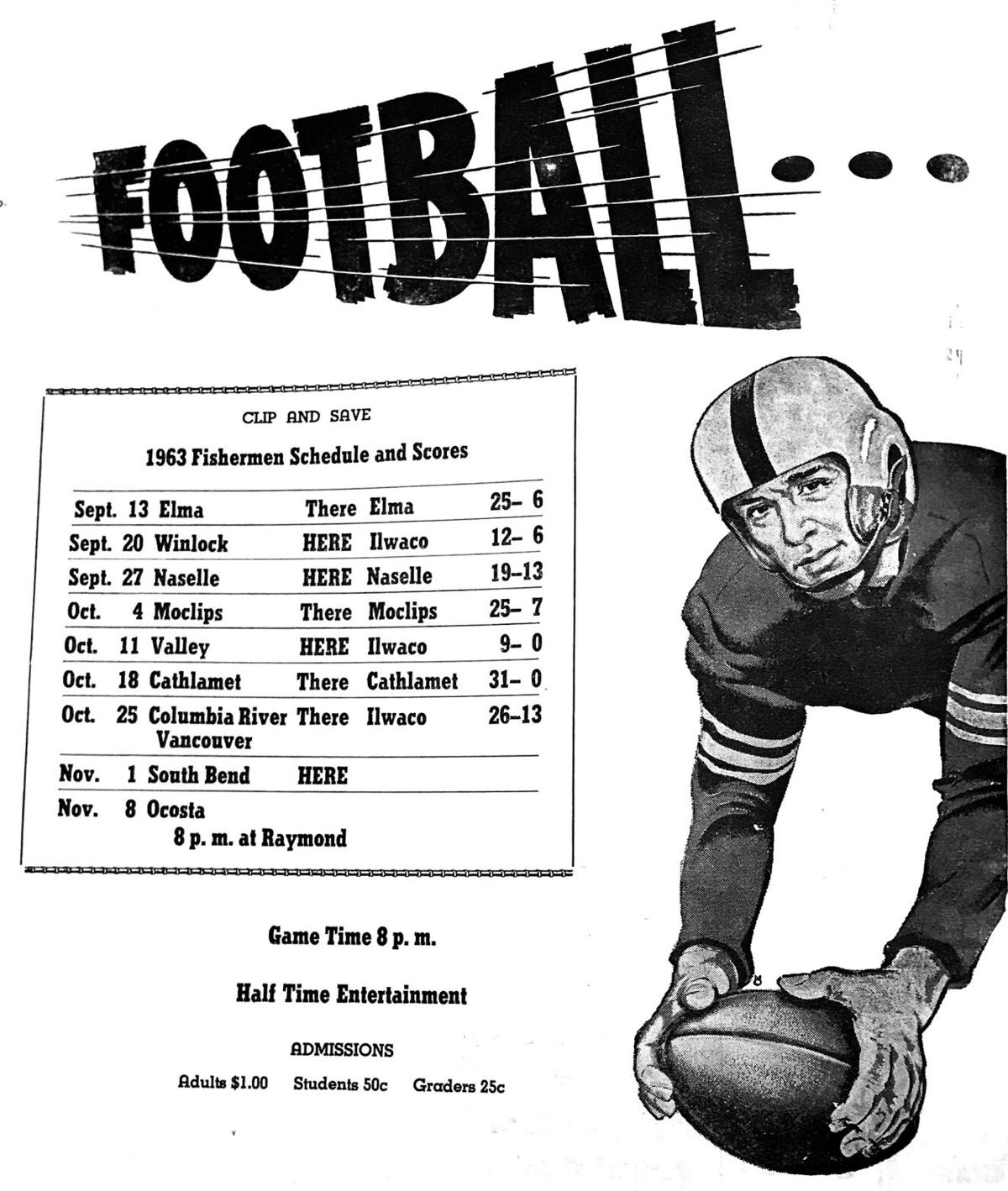 Playing football was one key to social acceptance at Ilwaco High School in 1963. 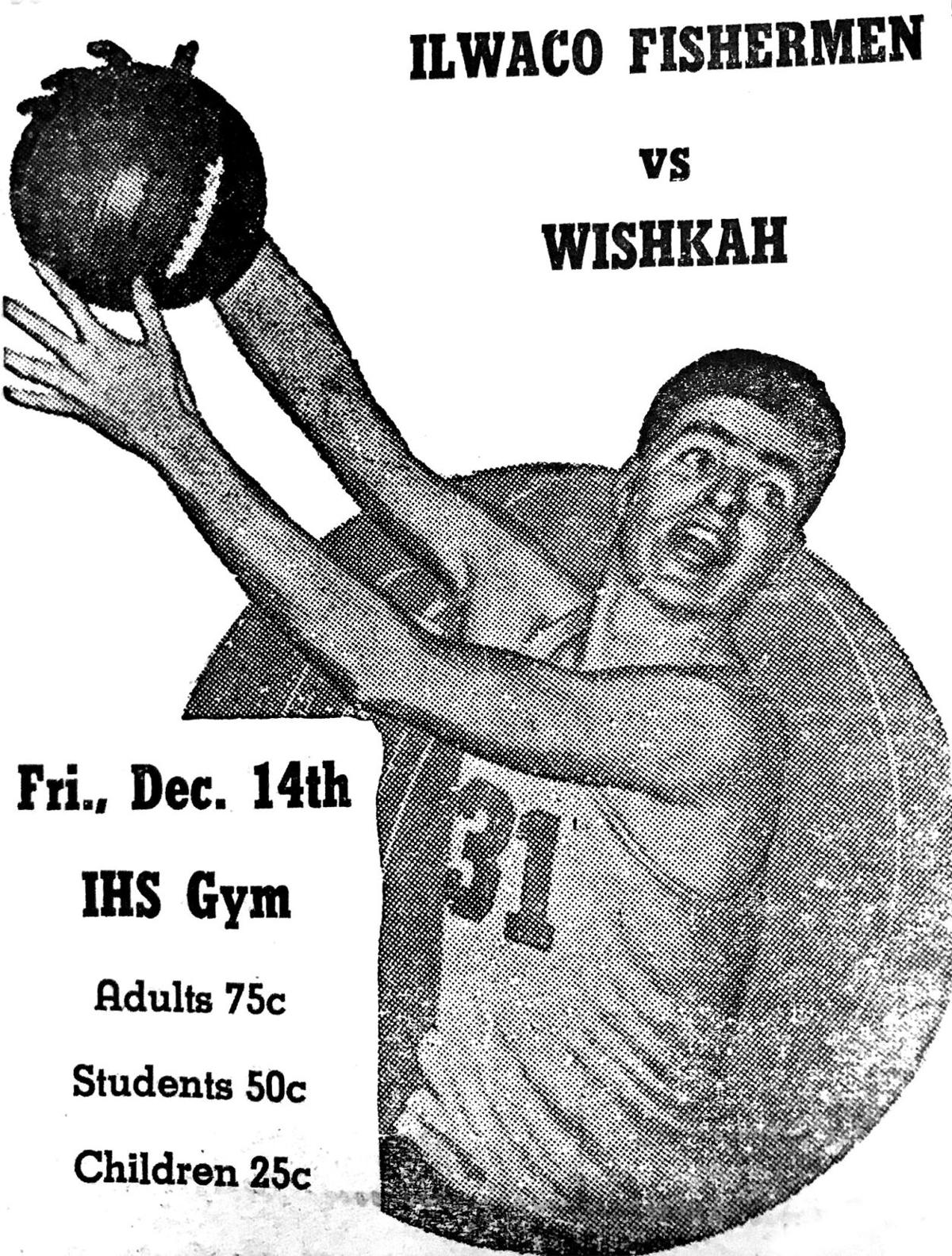 The mid-1960s were a time of gloriously victorious seasons for the Ilwaco High School basketball team, led by Phil Oman. This advertisement in the Chinook Observer, featuring a generic player, promoted each week’s game. 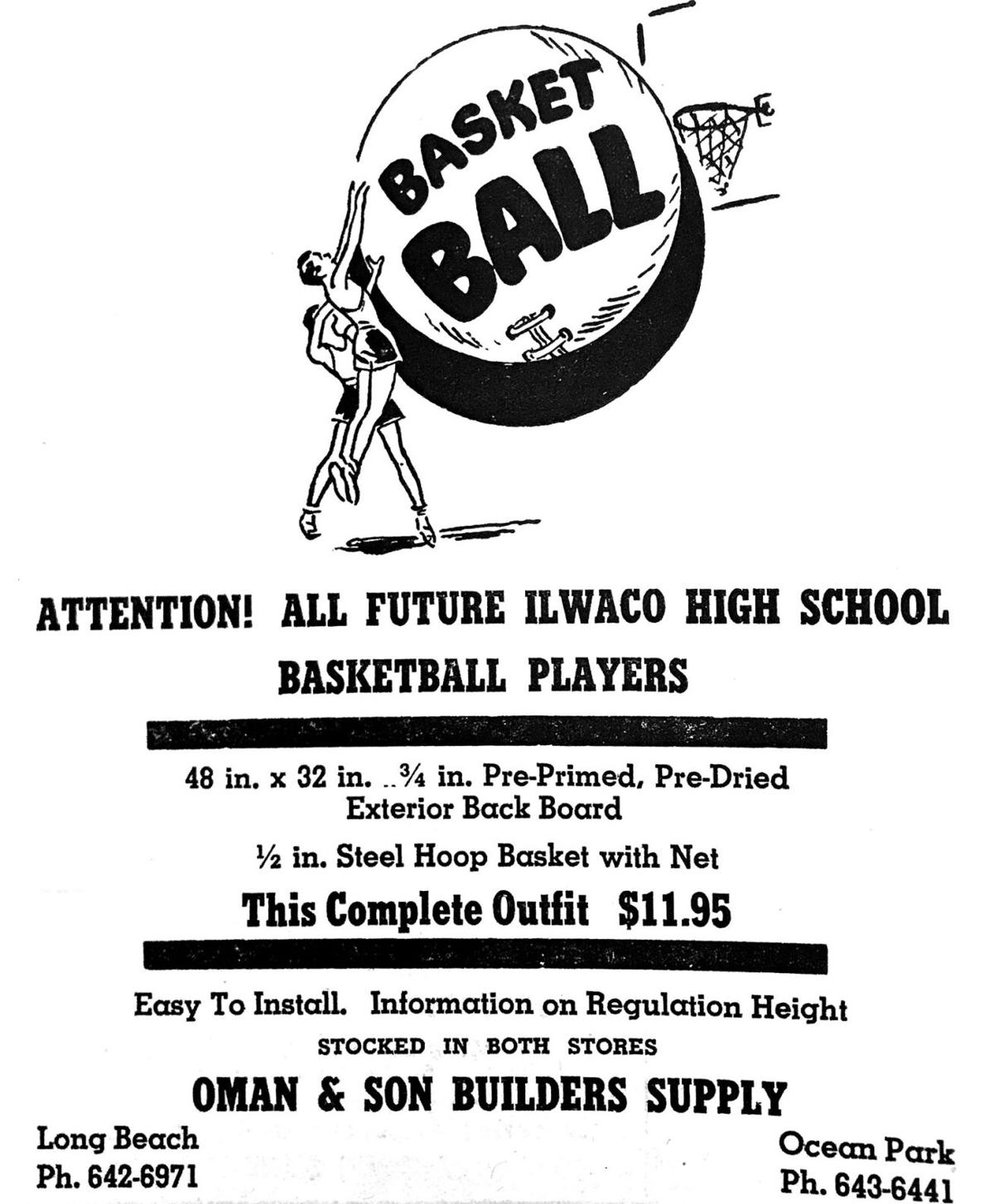 A Chinook Observer advertisement for Oman & Son from 1963 appealed to the basketball-crazy families of Ocean Beach.

In the early 1960s, the bad boys were drinking beer, not smoking pot or imbibing in psychedelic drugs. On Friday nights, a few of the athletes would sneak a beer or two, after a football game. Most of the games were successful in those formative years, and in a school as small as Ilwaco — I believe the student body hovered around 200 — everyone knew everyone, or at least, thought they did.

The students were white, with two exceptions, and one in specific, felt the sting of discrimination every single day. His sister, a natural beauty felt it in different ways. Good looks mattered in our school. I suppose it does everywhere, but at Ilwaco that allure of beauty absolutely cast one into a higher strata of popularity. Those fortunate few became the cheerleaders and class officers. And it seemed that many of the premiere athletes were handsome, though truth be told, if you could dunk a basketball, you were “in.” Certainly they were more privileged. One of the few teachers who took exception to that rule was one, Miss Gloria Hause. Someone had to uphold the writers and poets and musicians. Still, I believe that even Gloria got caught up in the excitement of a near perfect basketball season.

I hung out with one of the gifted. Greg Reese was tall, handsome, and in relative terms, a talented athlete. To some degree, he was a savior to this short, bashful kid who played ball (football and track) in order to get himself a date and, just as importantly, to scratch out whatever line of popularity that one could beg or steal. I had enough brains to be a smart aleck. Somehow this covered up natural vulnerabilities, allowing this kid to squeak by without too many bumps and bruises.

I don’t entirely know what other kids did on weekends — perhaps they were dating those special girls. Perhaps they were practicing ball. Or gorging on the contents of a red plastic burger basket: fries, cheeseburgers (the holy grail of cuisine), and milkshakes at Chuck’s Drive In. Greg and I hunted and fished and wandered through what was then old-growth forest. My love of nature began along the shores of Willapa Bay, or in the virgin backwoods of Deep River, or exploring the old growth forest on Long Island. Greg got his dates, too. I remember a number of the lovely girls. At times, I was allowed to tag along, never very sure of myself.

Self-awareness came about in the back of study hall where we passed Henry Miller novels between covert glances from the study hall teacher who was generally absent. Kathy Holway would later sing at the New York Met. Helen Tarter — another compatriot — went on to teach at Swarthmore. Both were so talented, but in high school, they were teased endlessly. In the long winter of our dissatisfaction, we grouped together like pioneers with circled wagons and waited for the bell to ring, predicting our daily escape.

'I don’t entirely know what other kids did on weekends — perhaps they were dating those special girls. Perhaps they were practicing ball. Or gorging on the contents of a red plastic burger basket…'

Generally, football began just after sixth period. We spent more time on the field than in math, science and English classes combined. I don’t think that I traveled home — generally after dark from football practice — with any homework. Or rarely. My grades reflected this lack of motivation. My father, a scholar who studied physics with Enrico Fermi, remained particularly unimpressed.

Al Lord, our principal, was both a gentleman and an egalitarian. Fairness guided him, and he insisted on its application. Generally, he was overwhelmed. Most everyone was. Ask me, what difference does fairness make in a world of seven billion human beings? Well, to this one, it made a big difference.

In my time at Ilwaco (I do not mean to make this sound like a prison sentence), we competed well in all athletic events. We rated high in state football. As I recall, we took the district basketball title during both my junior and senior year. We became known as “the run and shoot Fishermen.” We played very well at State. Excepting for one bad call at the end of regulation, we should have taken the grand enchilada, at least once. I was the manager. Phil Oman was the star. His cast of supporters were exceptionally talented. Phil seemed to walk on air, up high and proud. In one ball game against a junior college in Longview, he threw in 54 points. For years he held state records in shooting. Perhaps they still stand. We played eight-minute quarters. That is a lot of straight shooting in a short ballgame. Phil also stood above the pale as a boy who was fair when it came to dispensing a kind hand and encouragement to the less talented. Several others did too. No one was perfect.

This was the era of the Vietnam War. Debates were uncommon in history class. The most insistent opposition came from me, the rabble rouser. My father hung to the left of Sen. Wayne Morse, one of the earliest dissenters to this tragic slaughter. When I followed suit — as children do reiterating the sage advice of their parents — I was grounded on the football field. Dean Carter, history teacher and coach, believed in the Domino Theory and never appreciated my objections. Widespread opposition to the conflict would not raise its head for a few more years. Several of my classmates signed up with the military. Soon, others were drafted. By 1968, loyalty fell out, and unfortunately, there was plenty of divisiveness. I am sorry. Those boys were brave and believed in their country. They deserved a nation’s support. Our support. They still do!

John Kennedy was gunned down in 1963. A shadow fell over the student body. School was closed, or perhaps the weekend just fell upon us. We spent hours watching the funeral procession and listening to the deafening hum of sorrow. Perhaps that was the time when we — a nation — lost our innocence. That innocence would soon be shattered, and repeatedly. In that same decade, Martin Luther King was murdered. When I was a sophomore in college, Bobby Kennedy met the same fate as his older brother. Outrage and sorrow roiled. Fifty years ago in May, the National Guard killed four students at Kent State, and two blacks at Jackson College. Anger boiled, left and right.

One wonders how we went from drinking a few beers to a youth culture who endorsed the use of drugs? As near as I can tell, there were none — or truly little of that use — in high school. One thing for sure: Johnny Mathis and Herb Alpert were smothered by the Beatles. Modern jazz took a back burner. School dances reflected Guan Tana Mera and the same pervasive culture of the young and beautiful. OK, I was a wallflower. Greg and Bob (the forward with pogo stick legs) danced the night away. Most of the athletes did. They had first choice. Mostly, the dances represented a culture still in the throes of the late 50s. In a year or two, that would all be blown apart. Along came Bob Dylan. The Doors. One door opened, another closed.

The years have played out. Many of my classmates have passed. The rest of us are no longer fleet of foot. Generally our brains are mostly intact, but certain memories shun us. These are mostly good memories. There is certainly an argument to be made that these were, in many aspects, good times. But didn’t the Buddha say that suffering is part of being human? We learned, often the hard way, and there were casualties.

More than 50 years have passed. We have gone from slide rules and typewriters to the most dynamic computers. Today’s accomplishments of modern science, many which would have flabbergasted the best minds of the 1960s, roll on and on, a marvel to witness. Two years after high school graduation, we landed on the moon. Now these children of the 60s, and particularly their offspring, are exploring the depths of our galaxy and universe, and recent science suggests more, much more.

Finally, I toast my classmates for the memories.