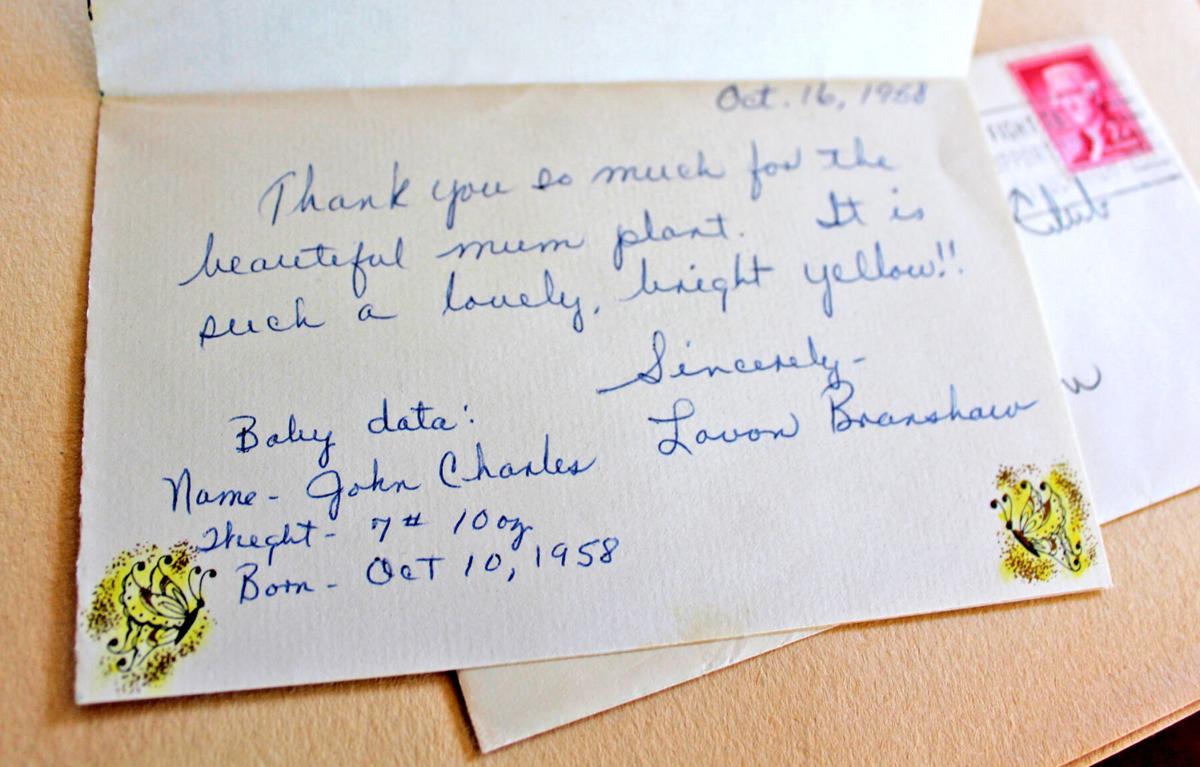 A notecard sent from Lavon Branshaw to Loretta Brockhoff to thank her for the gift of a plant on the birth of her son in 1958 was among items the women discovered when they went through the scrapbook. 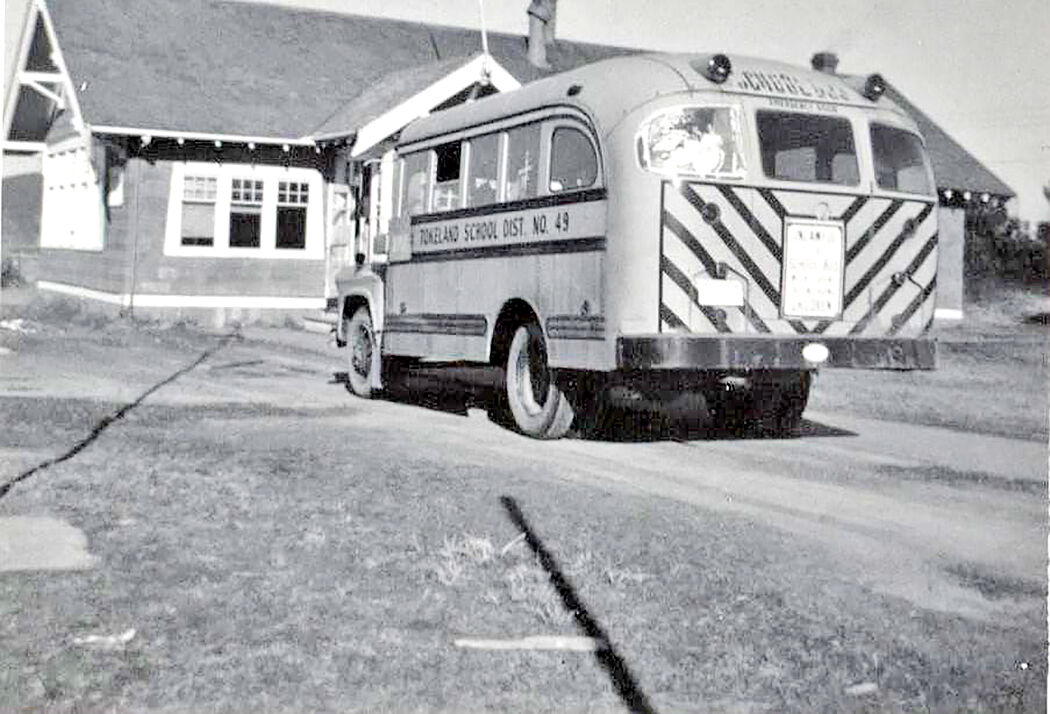 This 1960s photo shows the old Tokeland School and the bus, bought by the Tokeland Mothers Club. The group raised funds for items not covered by the school budget. The largest items included the bus and a lunchroom. 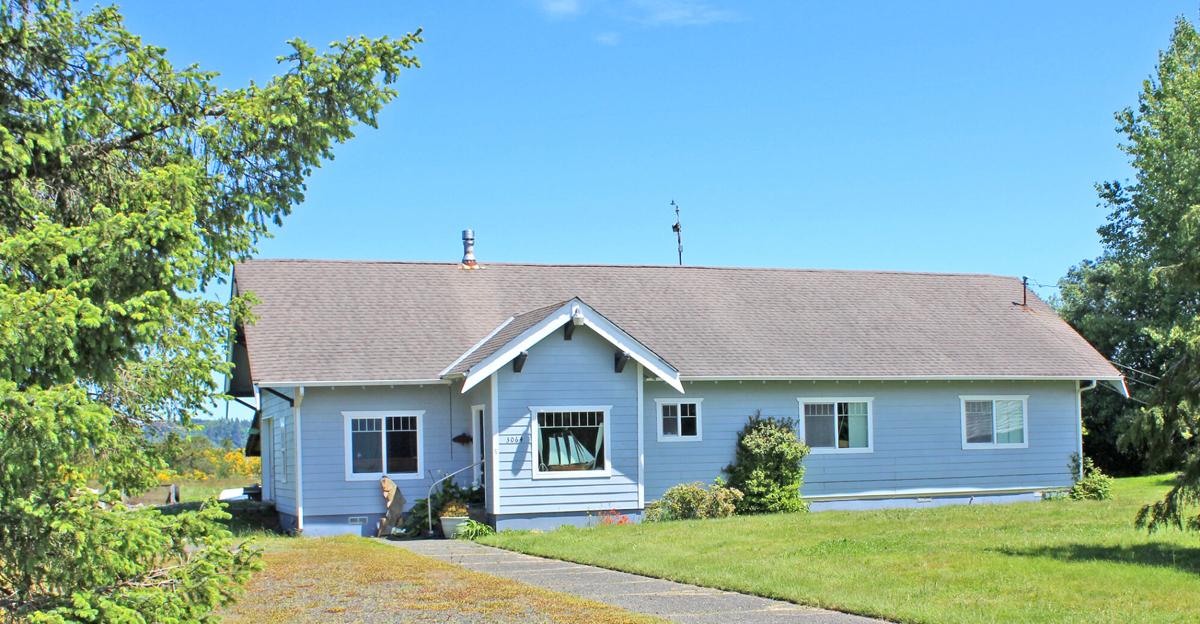 After the consolidation of the Tokeland Schools with Ocosta in 1968, the Tokeland schoolhouse was auctioned and converted into a private residence which still stands today. 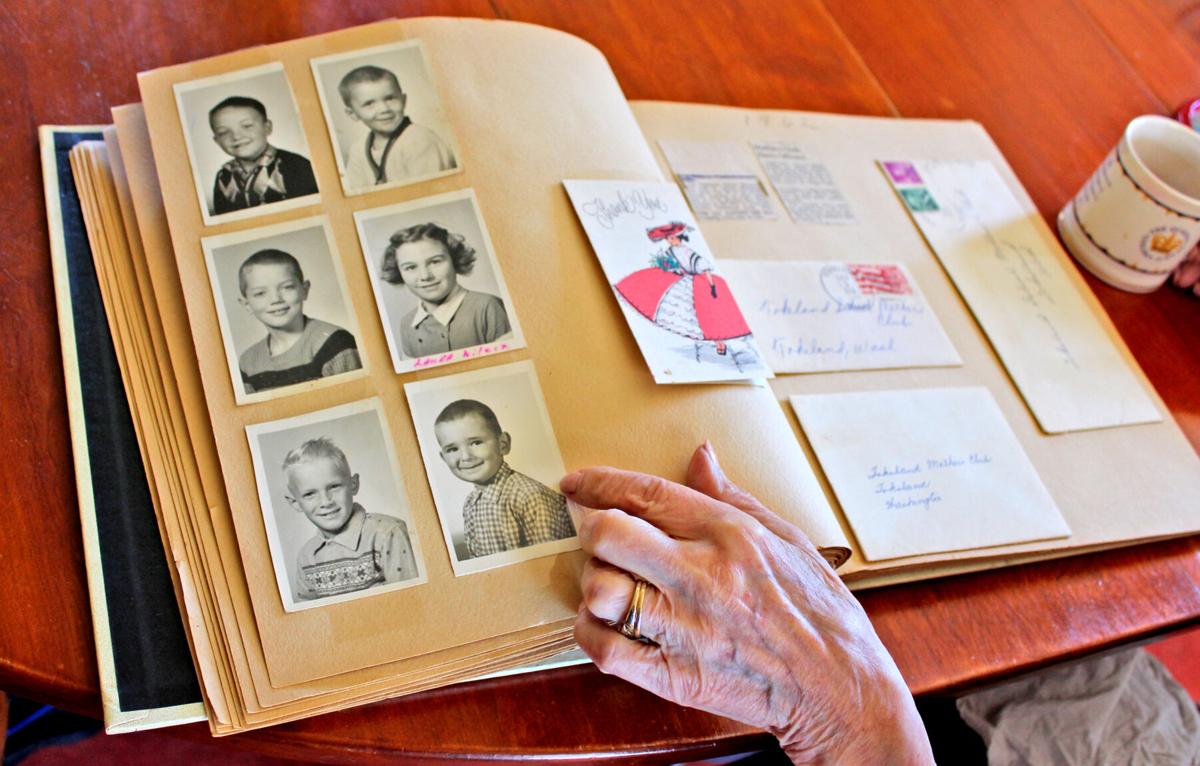 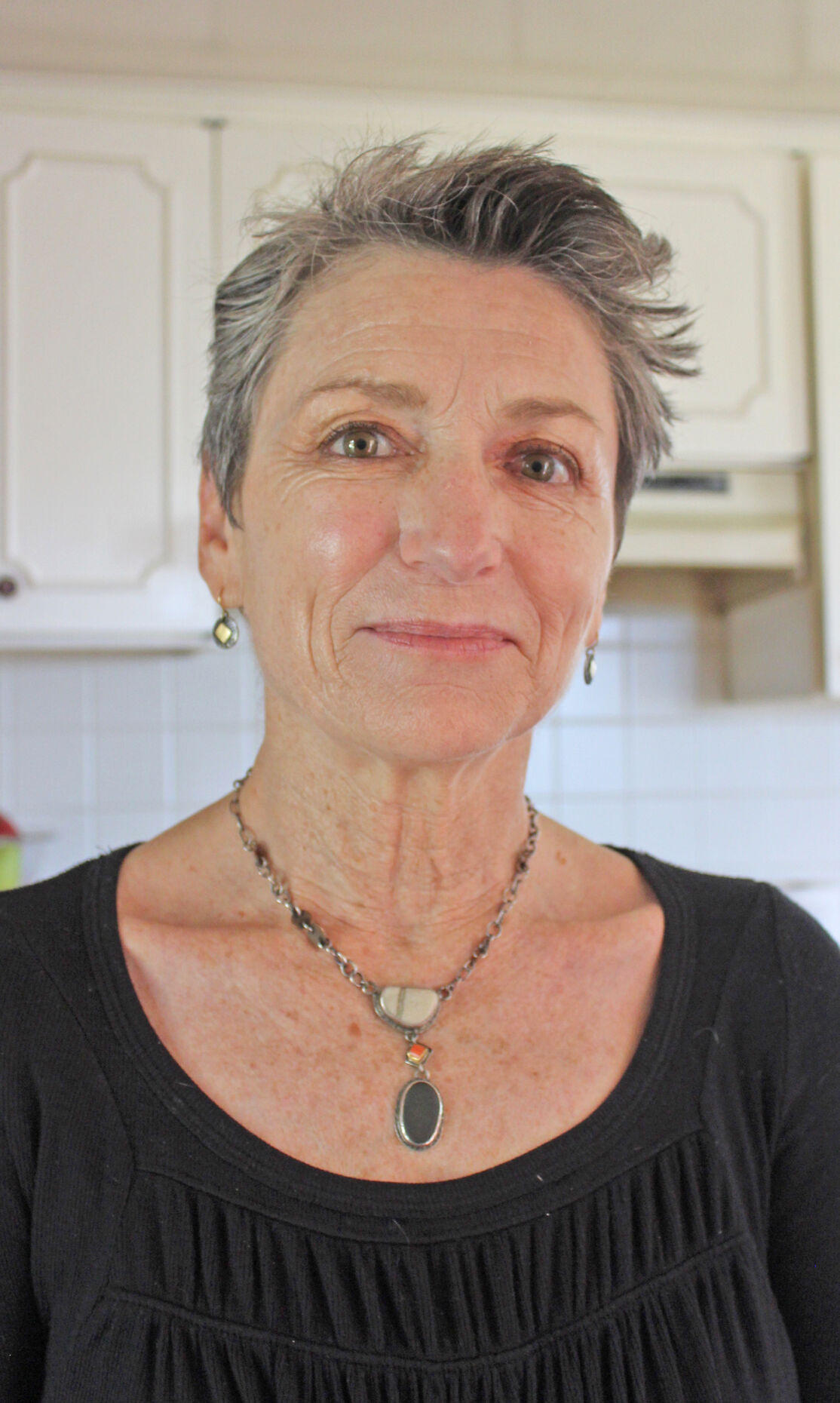 ‘It gives a real picture of what life was like.’ — Judith Altruda Tokeland artist and historian

Loretta Brockhoff, left, Lavon Branshaw look through the 1950s scrapbook for the Tokeland Mothers Club. The group’s two surviving members, aged 91 and 90, plan to present it to a museum. They were young mothers in the 1950s and delight in telling stories of adventures with their husbands, who were both commercial fishermen.

As lifelong friends Loretta Brockhoff and Lavon Branshaw thumbed through a 1950s’ assembly of letters and yellowing news clippings, one checkered card stood out.

Loretta Brockhoff at the FisherPoets Gathering in Astoria 2020.

Perfect cursive spelled out a message from one young mother to another. “Thank you so much for the beautiful mum plant. It is such a lovely bright yellow!”

Across her kitchen table, Judith Altruda, who helped save the scrapbook, beamed.

The treasure was in the moment.

Altruda is a key figure in the preservation of the history of Tokeland, where she lives overlooking the ocean. In addition to her creative work as an artist in metal and other media, she is researching the remarkable life of Eugene Landry, a severely disabled painter who chronicled the lives of fellow Native Americans on the Shoalwater Bay Reservation.

Ronnie Wilcox, whose family had operated the Tokeland Wilcox Grocery Store, contacted Altruda when he discovered the scrapbook of the Tokeland School Mothers Club. “He was concerned about what was going to happen to this book,” she said. “It was recognized as an important historic artifact that we didn’t want tossed.”

Brockhoff and Branshaw are the two surviving members of the club, which thrived in the 1950s and 1960s, serving as the booster club for the school.

They plan to present the scrapbook to the Pacific County Historical Museum in South Bend — but not before savoring its contents.

“There was not much else going on,” smiled Brockhoff, when asked about how the Mothers Club became the hub of the community. “If you had a kid in school, you became a member.”

She and Branshaw both married fishermen and each had five children.

The club acted as a fund-raising arm of the Tokeland School, a two-room schoolhouse that existed from 1897 until Tokeland consolidated with Ocosta in 1968. Mothers took turns being president; members organized raffles, wiener roasts, rummage sales and dances. They hosted potlucks and an annual school picnic at Dexter-by-the-Sea.

“We all had young children and we stayed home. It didn’t take too much to entertain us in those days,” said Branshaw with a laugh. “TV ruined it all.”

“It was the only social thing outside of the tavern in town,” added Brockhoff, who is Tokeland’s oldest resident.

In a published history, Branshaw, of Westport, explained the context.

“Events revolving around the two-room school house in Tokeland were the major social attraction during the time we lived in the community ‘at the end of the road,’” she wrote.

“The time was prior to the completion of the Tokeland-Raymond highway link in the early 1950s and the little town seemed a long way from nowhere.”

In those days, Mr. Christensen taught grades 4 to 6 in one room and Helen Walls taught students in grades 1 to 3 in the smaller room next door.

Branshaw noted that she, Dave Hawthorne and Virgil Wilcox served on the school board for a time. “Dave was a bookkeeper for Nelson Crab Co. and he held tight rein on school funds. The school made do without extras deemed necessary by today’s educational system.

The basic Three Rs, as well as respect for other’s property, and social graces such as ‘please’ or ‘thank-you,’ were high priority for the teachers.

“The annual Christmas program filled the school with parents, grandparents and younger siblings of the students.

“In addition to being a social outlet, we raised funds for the school and were even called upon to clean a few sacks of clams confiscated from some renegade clam digger by fisheries agent Hans Schmidt.”

The scrapbook contains black and white and early color snapshots, faded newspaper clips of elections and events, plus letters and postmarked envelopes, some with 3-cent stamps. “It gives a real picture of what life was like,” said Altruda. “All the connections to personal lives. They sent flowers to mothers who moved away. It’s a beautiful record.”

Remembering fund-raisers elicited richly detailed anecdotes from the nonagenarians, including tales of party line telephones, traveling by boat to Raymond and South Bend before the highway east was constructed, and the influence of Croatian fisher families who moved from Aberdeen.

One event raised money to buy a blanket and pillow for children to use when taken ill at the school. Another raffle was for an electric blanket, a novelty introduced to American consumers in the 1940s. It was won by someone who lived in a trailer — without electricity. Yet another was for a doll, and all the mothers made clothes for it. The $100 it raised was big money back then, they recalled.

The club bought two sets of encyclopedias and, later, even a bus, although Brockhoff said that was amusing because most kids only had short walks to school. “We didn’t need a school bus,” she laughed. “We also built a lunchroom. They all lived so close, but they got to eat together and didn’t have to walk home on a stormy day.”

Bleak weather was a constant. The 1962 Columbus Day storm took its toll — everyone’s electricity was cut off and one house washed into the road.

Brockhoff, who attended Ocosta schools, “grew up in the backwoods 10 miles out of Aberdeen with a three-quarter mile walk to the school bus stop.”

As a mid-teenager, she flirted with the idea of joining a friend in Seattle who worked for the telephone company. Instead, she was lured to Tokeland to work as a crab shaker, processing 20 pounds of meat a day. That could earn her $12, well above most jobs for women that paid 5 cents an hour. “I came here because of discrimination — low wages for women,” Brockhoff recalled.

She and her fisherman husband, Jack, raised five children, Bob, Alan, Joe, Shirley and Jennifer, and have 13 grandchildren. Bob and Joe followed their father onto the water; Shirley was named for her dad’s boat. Jack died in 2007.

Branshaw’s links with Tokeland were rooted in family. “I thoroughly enjoyed living in Tokeland because my husband had such fond memories of growing up in the community with his grandfather,” she said.

Dick Branshaw died in 2016 just short of his 89th birthday. He was a Hoquiam boy who worked at the Nelson Crab Co. cannery in Tokeland before serving in the U.S. Navy. He and Lavon, of Grayland, married in 1949. They had five children, Randi, Beth, Jon, Tom and David, and eight grandchildren. Randi died of cancer in 2012, aged 62.

With a partner, the Branshaws built the Windward Café and Charter Service which operated during summers near the Tokeland dock. Dick was a longtime commercial fisherman, a 61-year career that took the family to live in Cordova in Alaska, returning to Westport after the 1989 Exxon Valdez oil spill devastated fishing and tourism. He retired in 2010.

Memoirs from the beach

Brockhoff is 91, Branshaw 90. The connections between the two women are significant.

Brockhoff ran the mail order gift department for the Nelson Crab Co. until her retirement. Her sister, Ruth, married Earl Davis, who was the first chairman of the Shoalwater Bay Tribe when it received federal recognition in 1971. Davis, who had attended the residential Chemawa Indian School in Oregon, was a contemporary and friend of Branshaw’s husband, Dick.

Both women have published memoirs. Branshaw’s “Second Fiddle to the Sea,” was a reminiscence project suggested by older daughter, Randi, to occupy her mind during Dick Branshaw’s final illness.

‘It gives a real picture of what life was like.’

Brockhoff’s short stories of growing up in Grays Harbor County during the Depression-era, “Our Father’s Children,” were published in 2019. She has also produced, “Surfing My Memories: Poems, Prayers, Dreams and Promises.” She earned a standing ovation at the 2020 FisherPoets Gathering at the Liberty Theatre in Astoria reading her creative work, a performance preserved on a YouTube video. Organizer Jon Broderick said her appearance was memorable.

This is called ‘progress’

The discovery of the scrapbook delighted both women, as well as Altruda. All are grateful to Wilcox for realizing its importance. “We wanted the community to know that this is going to be at the museum,” Altruda said.

One 1957 Christmas thank-you card in the book is from the artist, Landry, whose legacy she is dedicated to preserving. His struggle to create memorable artwork, despite the debilitating impacts of tubercular meningitis, took him to the Cushman Indian Hospital near Tacoma where aides dropped him, causing even further disabilities.

Landry’s card thanks the Tokeland Mothers Club for a subscription (sadly, it is not explained). “The ladies of the club didn’t forget Gene, even though it had been years since he had been at the Tokeland School,” smiled Altruda.

For the record, the Mothers Club opposed the 1968 consolidation with Ocosta, citing travel time worries. They disbanded once the merger was approved. Their last president had been Corinne Wilcox — Ronnie’s mother.

The schoolhouse was auctioned and renovated as a private home, now at the intersection of Third Street and Emerson Avenue.

Branshaw’s published reminiscence contains an apt quote. “I get nostalgic at times and wish the area could be like ‘the old old days,’ but realize that this is called ‘progress.’” she wrote.

Katherine Ryan gives birth! Did you know that these 10 stars also kept their baby news quiet?