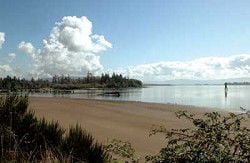 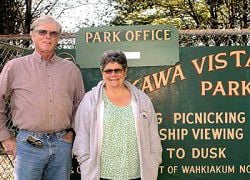 SKAMOKAWA - "The ships come by so close it seems like you can touch them," Port of Wahkiakum No. 2 Manager Bob Robinson says. "We have made many improvements at the port including the facilities at Skamokawa Vista Park and we want to make more. Our long-term goal is to pay for everything with only our income and not have to levy any taxes."

The port includes boat launches, a camp ground, and a recreation area and is located 30 miles west of Longview and 48 miles east of Long Beach. Its 70 acres features beach front property and a 180-degree view of the Columbia River. Title 53 of the RCW of Washington is about forming, setting the purpose, and defining the powers of port districts. "Ports are primarily created for economic benefits such as transportation by ships, trucks, or airplanes. There is also a section in the RCW about ports maybe providing for recreational uses. We take full advantage of that," Robinson says with a smile.

Port of Wahkiakum has a boat launch at Vista Park in Skamokawa and one on Puget Island. The port also helps maintain nearby buoys and the beach area. The park has camping and recreation facilities and amenities comparable or surpassing many county and state parks.

"We have 45 full hook-up or electric campsites available and five yurts for rent and in the summertime we have over 50 additional campsites with fire pits and picnic tables. We are at full capacity (about 100 sites) almost all summer. In the winter things slow down, but many fall weekends there are still a lot of people here enjoying the park and the river," Robinson explains.

There are basketball and tennis courts, a gigantic playground set, soccer fields, a softball field, a horseshoe pit, a Lewis and Clark historical kiosk and several sheltered picnic areas. Yurts are heated and have mattresses and many campsites have sweeping views of the Columbia River and the Oregon hills to the south and many are relatively concealed for privacy.

The biggest draw is the river and beach for boating, fishing, lounging or taking a stroll. There is also a walking trail in the nearby woods. The area is a hot bed for kayakers of all skill levels. "The kayakers love the sloughs and the unpopulated islands in the Columbia," Robinson says. Hobie cats are a new watercraft that is becoming popular on the river.

Robinson was hired this year as port manager to make sure it is in compliance with all regulatory requirements including in the financial and operational areas. He is also in charge of keeping the water system on line and in compliance and in making capital improvements, such as re-roofing the buildings this past year. Another of Robinson's duties is negotiating public contracts, including the selling of dredge materials through the Department of Natural Resources.

During routine dredging of the Columbia River channel, the dredge material in the form of sand is deposited on the Vista Park beach. That sand is then sold to local contractors for a profit with the proceeds going to help maintain port facilities. Some of the dredge material has also been used to build up the western shore and fill in a large area that was eroding.

"Before I took the job I made sure the commissioners had an outstanding office manager," Robinson says. "Port chairman is Brian O'Connor and other commissioners are life-time residents Kayrene Gilbertsen and Carlton Appelo and they know just about everything there is to know about this great area. They hired a great person in Janet Bryan."

Bryan's office duties include handling reservations, day-use fees, boat launch fees, accounts payable and receivable, and watching over the one full-time and two part-time maintenance workers. The office is open 11 a.m. to 2 p.m. from September to May Monday through Saturday. In the summer it is open 9 a.m. to 5 p.m. seven days a week.

Bryan, who is "an almost life-long resident of Skamokawa," says, "I love to work with people so this job is ideal for me. This is a family-oriented facility. Because of its location and the people who come to visit this a really fun place to work."

Campground fees and reservations are available by by e-mailing or calling 360-795-8605. Information can also be found on the Web.

Bob Robinson: from court to port Bob Robinson has come full circle, or one could say from court to port. He grew up in Ilwaco and graduated from high school in 1967. Robinson teamed with Phil Oman and many other local stars to finish fourth in the state 1A basketball tournament as seniors, but that team's main claim to fame was scoring points and Robinson and Oman were the best tandem in school and possibly district history.

Robinson poured in 1,182 points and Oman 1,316 in their three years of varsity hoops, sixth and fourth best in school history, and their combined total of 2,498 points is tops. "We could have been state champions, but lost to White Swan by one point in a game that we should have never lost," Robinson says shaking his head.

Actually the Fishermen lost the quarter-final game to White Swan 38-35, but led by Robinson and Oman they averaged 98 points per game in their other three contests. That average is far and away the state scoring record for three games at any classification level. Robinson "played all the other sports" including football, track and baseball. He also loved boating and fishing for salmon.

But Robinson almost never became an athlete. "I really liked playing in the band, but my coaches influenced me to play sports." He attended two years of college and then took a job with the local telephone company. He spent 20 years as a district engineer construction manager, with the majority of those years on the Kenai Peninsula in Alaska.

Robinson then returned home to be Port of Ilwaco manager for five years. Later he moved to Shelton and became port manager there for 10 years. "After that my wife, Barbara (currently Surfside Homeowners manager), and I decided to move back to the beach and our home in Vandalia. I spent time building onto our house and we took second in the Tuna Classic," Robinson says of the highlights from his brief retirement.

"When I saw the advertisement for the Port of Wahkiakum No. 2 manager I thought I might have the qualifications they needed. My only concern was that they had an outstanding office manager and they did have in Janet Bryan so I am able to work part-time and she takes care of everything else."

Robinson says, "Now I do just about anything from fixing a toilet to proposing the budget. I'm working to make sure we are in compliance with the regulatory agencies. And I'm happy with the progress we have already made at Skamokawa Vista Park."