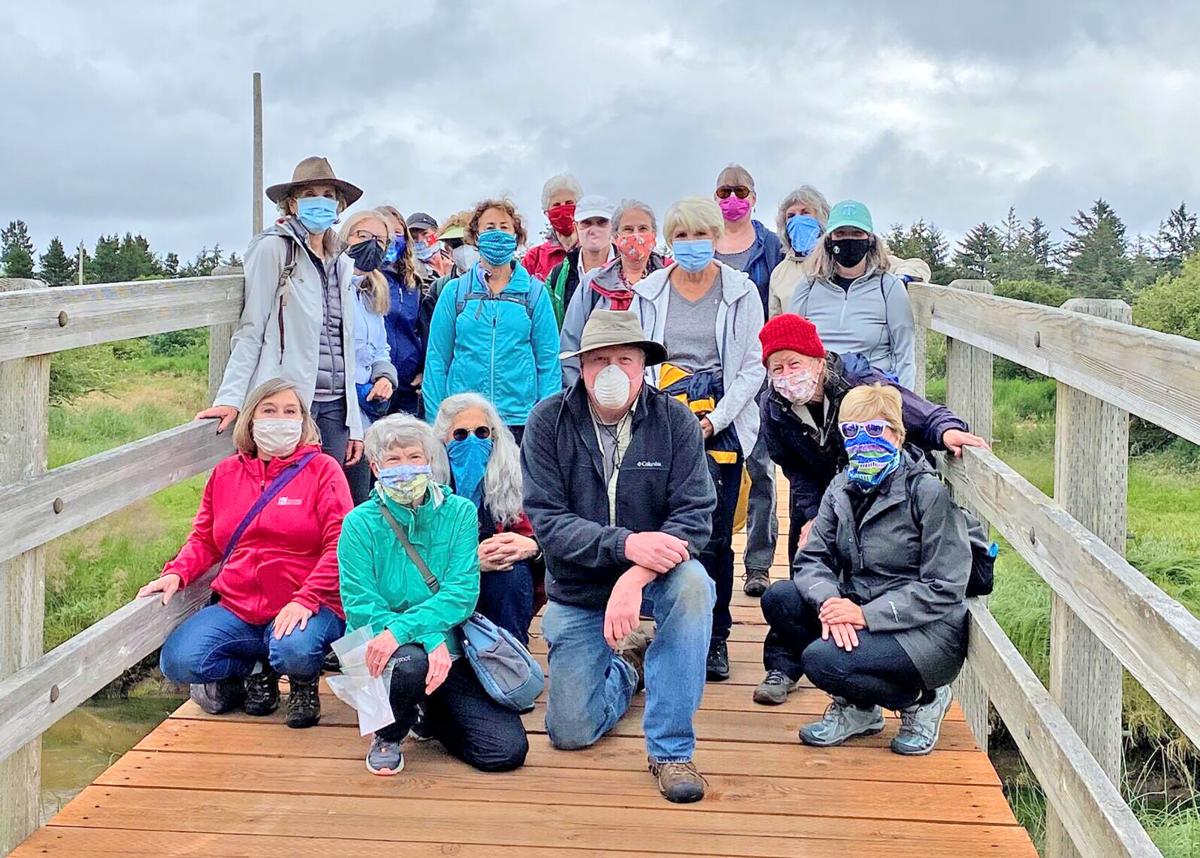 The club on a recent hike at Fort Stevens State Park. 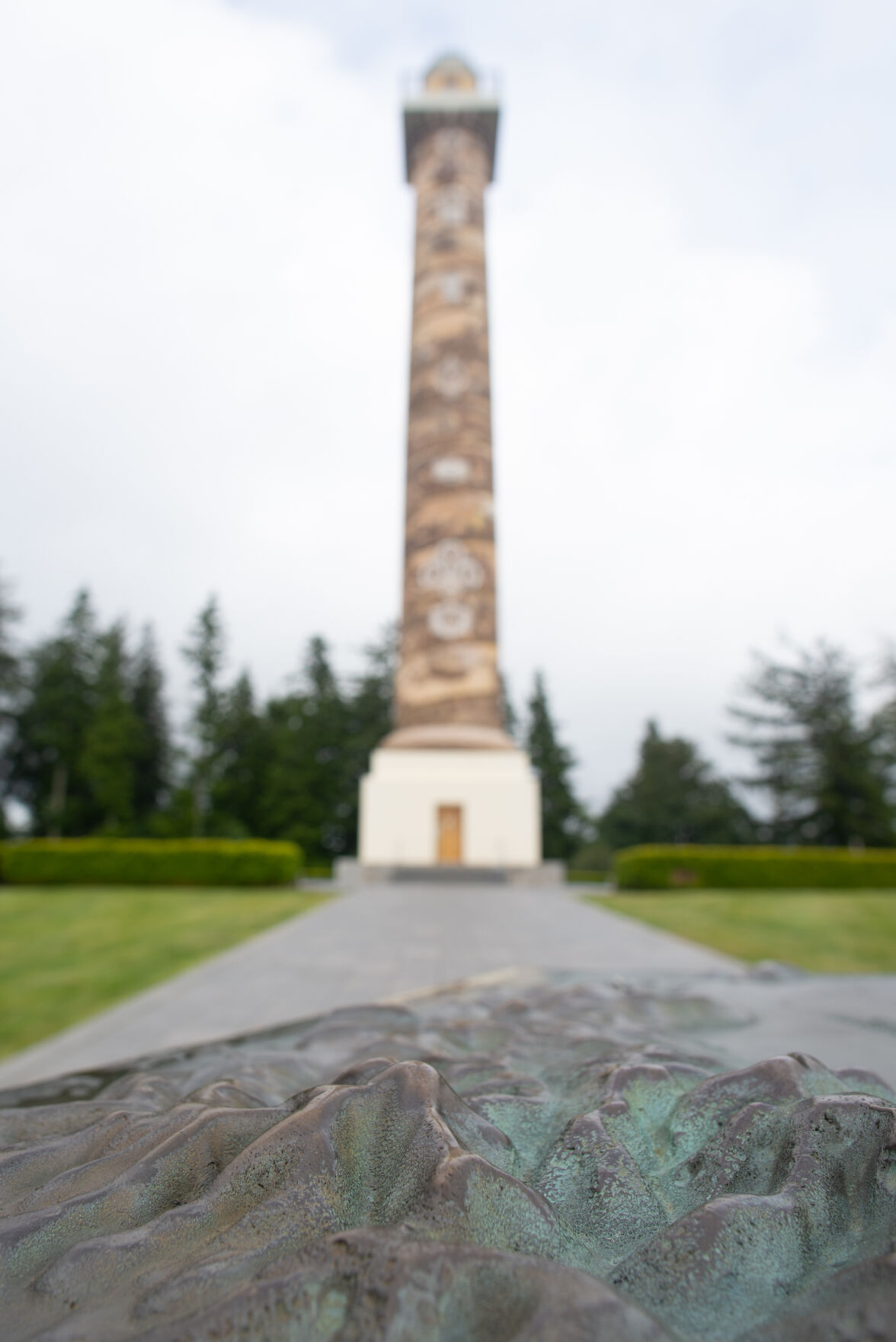 The 3D map at the Astoria Column of the North Coast donated by the club in the 1960s. 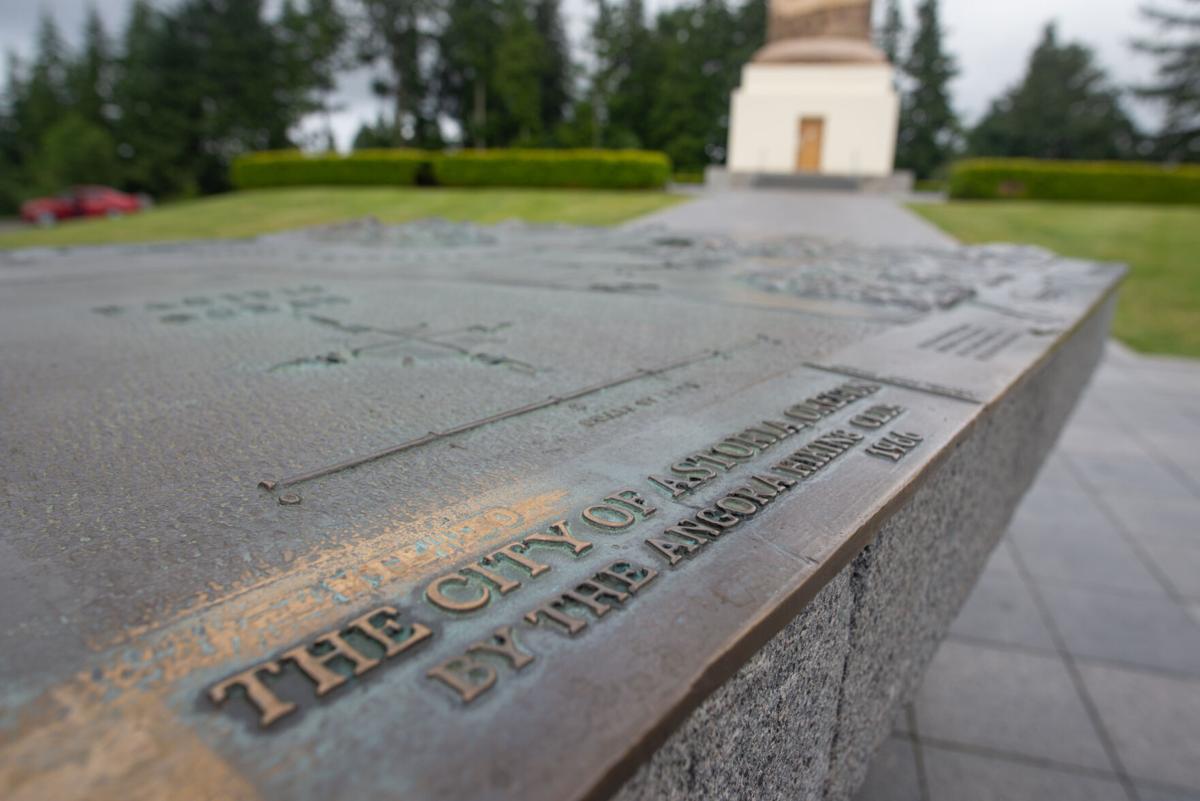 The 3D map of the North Coast at the Astoria Column. 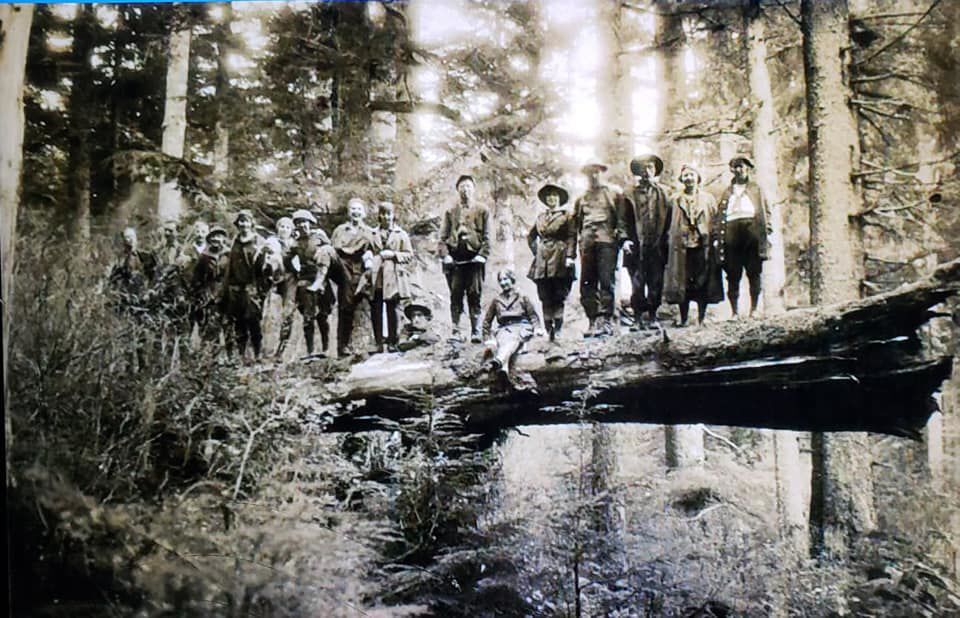 The Angora Hiking Club in the early days. 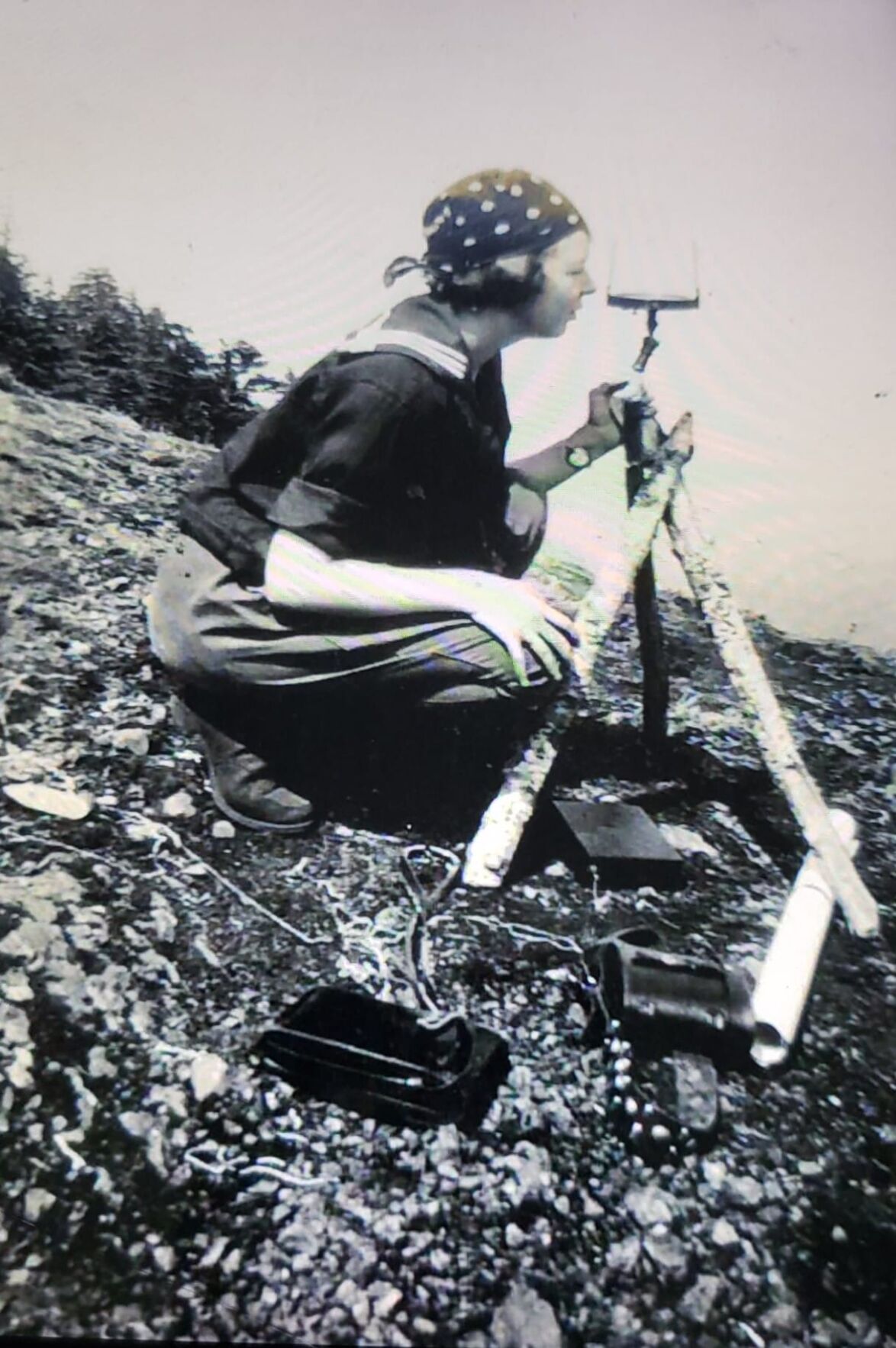 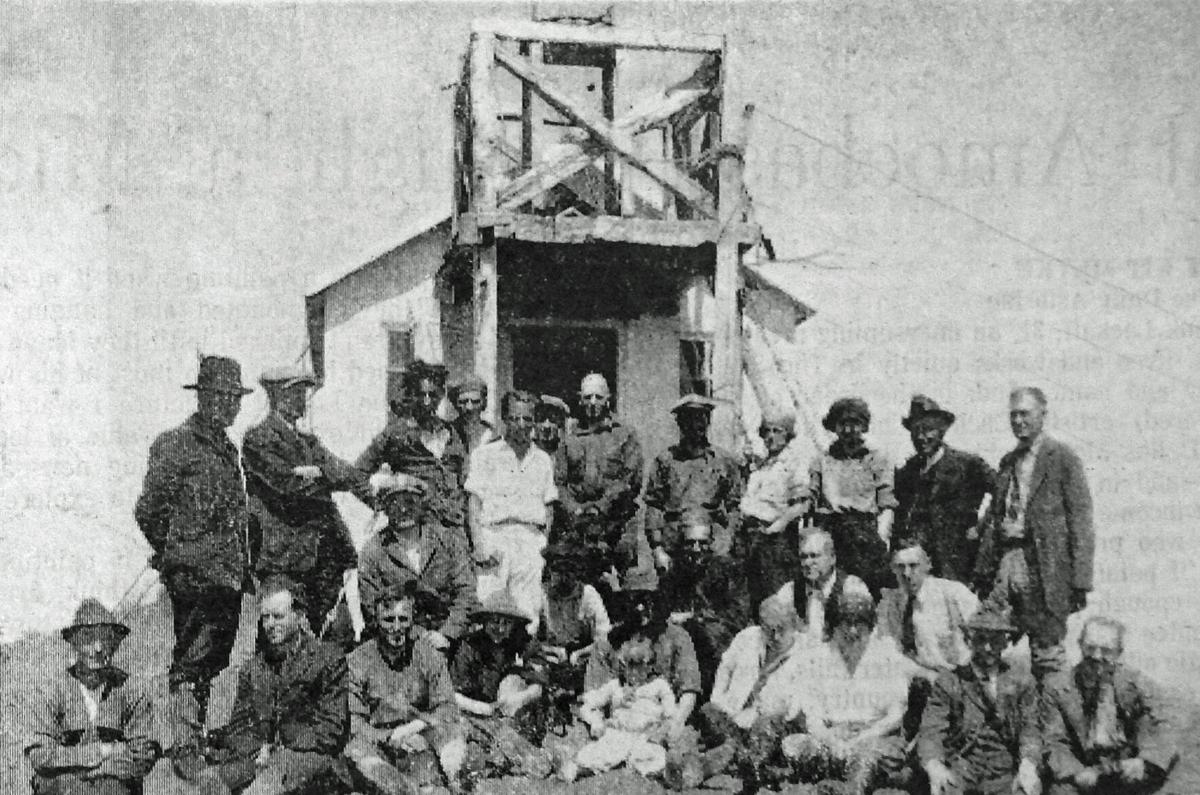 The Angora Hiking Club celebrates the club’s 50th anniversary in 1970.

The club on a recent hike at Fort Stevens State Park.

The 3D map at the Astoria Column of the North Coast donated by the club in the 1960s.

The 3D map of the North Coast at the Astoria Column.

The Angora Hiking Club in the early days.

The Angora Hiking Club celebrates the club’s 50th anniversary in 1970.

Visit angorahikingclub.org for information on hikes, membership and club history.

On a recent misty morning, nearly 20 masked strangers and friends ambled through trails at Fort Stevens State Park on the Columbia River mouth’s south side.

Some were locals, others had moved from New Mexico, Seattle and Welches. Some were retired, while others still work. One woman was spending the summer in Knappa with her goats. Washington state residents are welcome.

All have an enthusiasm for the outdoors.

One hundred years ago this month, 18 hikers summited Saddle Mountain, thus beginning a century of exploring through the Angora Hiking Club. Those who went had to use the logging railroad to get to the mountain, which also didn’t have a formal trail to the top.

The club has even done hikes on the coast where the start of each hike eventually spells Angoras: Altoona, Naselle, Gnat Creek, Oysterville, Rockaway Beach, Astoria and Seaside Prom.

The original members were part of the Knights of Pythias, a social group like the Elks or Moose. They spent Halloweens and Thanksgivings together and took part in parades and service projects.

An account of the July 4, 1920, hike in the Astoria Budget said, “Probably most unique among the Fourth of July celebrations held in Clatsop County was the one which members of Astor Lodge No. 6, Knights of Pythias, of this city, staged on the summit of Saddle Mountain at an altitude 3,210 feet at 8 a.m. yesterday morning.” The club read the Declaration of Independence and sang “The Star-Spangled Banner” atop the mountain.

The group’s motto? “We blaze the trail.”

The club etched itself into local history through the naming of Angora Peak near Cannon Beach after the club. A 3D relief map at the Astoria Column donated by the club in the 1960s shows our area and its various terrains.

Arline LaMear, Saturday’s hike leader and a former Astoria mayor, has been part of the club since 1998.

“We just want people to enjoy walking,” she said.

LaMear writes on the club’s website, “It (the club) has survived the Spanish Flu of 1918, the Depression of 1929, World War II, and the pandemic of 2020. How has it managed to survive all these years? It has offered a respite from work, stress, and depression, inviting folks to come out and enjoy nature.”

Before the hike started, LaMear explained the terrain and some of the area history. Because it was a weekend hike — a little over 6 miles out to historic Battery Russell and then to Coffenbury Lake — it was longer.

Participants formed a circle and introduced themselves. Some were first-timers while others were mainstays of the club.

The Angora goat, the club’s mascot, could be seen billowing in the wind on LaMear’s car window flags.

Many there said they come for the comradery, exercise and love of discovery the club brings.

“We offer a variety of trails from very easy to more difficult … we try to do different hikes each year, new hikes we haven’t done before, as well as repeating our golden oldies,” LaMear said. “… We walk on both sides of the (Columbia) river and try to get people out to see things that maybe they’ve lived near all their lives and just have never hiked there.”

Kathleen Hudson, the club’s president, moved to the area in 2000. She joined to learn about the coast and good places to walk.

Hudson said she tries to bring an educational component to the hikes by inviting rangers and those with specialized knowledge of areas to lead some of the hikes.

She has also seen the club’s membership rise. A 100th member recently joined.

“I think the lack of requirement helps it to continue to go up, and for people to have social gatherings that is not political,” she said.

Bob Westerberg, a retired pharmacist in Astoria, started going on hikes with the club when he was 16 and a sophomore at Astoria High School.

He said introducing people to “neat places right in your backyard” is something he’s always enjoyed about the club.

Westerberg and his family were also there for the club’s 50th anniversary in 1970, when the club hiked Saddle Mountain.

Climbing the mountain and Angora Peak were once requirements for joining the club. Now, club leaders say all you have to do to join is show up to one potluck.

It’s also cheap to join: the club only costs $10 per year.

“We’ve been just a simple hiking club most of the time and sort of pride ourselves on the lack of bureaucracy,” Westerberg said.

Westerberg said in the past, young, single people would meet through the hikes, particularly single teachers. A photography teacher and math teacher at Astoria High School met through the club in the 1950s.

LaMear, a lifelong librarian, said at one time there were three librarians in the club.

The club skews older. Forty is young for a club member, LaMear joked.

The club usually has three to four hikes per month. Wednesdays are easier, while Saturday’s hikes are more difficult.

“Most of us don’t mind walking in the rain as long as it isn’t the horizontal type and pouring,” LaMear said.

Westerberg said during hunting season, the club chooses hikes away from the woods. “Generally, we’re not in the places you can get shot at,” he laughed.

Westerberg said a memorable hike was when the Oregon Coast Trail first started and the club hiked its length from the mouth of the Columbia River to Tillamook Bay. The group would do it in six or eight relays every month and participants would earn a golden fleece certificate in honor of the Angora goat.

The club has even done hikes on the coast where the start of each hike eventually spells Angoras: Altoona, Naselle, Gnat Creek, Oysterville, Rockaway Beach, Astoria and Seaside Prom.

LaMear said the hardest hike she has done recently was when she turned 80 and climbed Saddle Mountain with the club last June.

“I kind of scrabbled up there the last few feet but I made it,” she said.

What keeps them going?

For LaMear, it’s the beauty of the area.

“I grew up, my dad was a surveyor, spent a lot of my childhood in the woods and usually in the Sierra Nevadas, so I was so delighted to find people here who like to get out and hike,” she said. “We have so much beauty here from the ocean. Yeah, the ocean, the river, the hills, all of it, the incredible state and national parks we have nearby, so all of that is to me — that’s my place, is outside.”

Those on the hike Saturday finished back in the parking lot after nearly three hours of walking. While stopping at Coffenbury Lake to rest, hikers saw an eagle dart down to the water’s edge and powerfully up again — steady, like the Angoras.