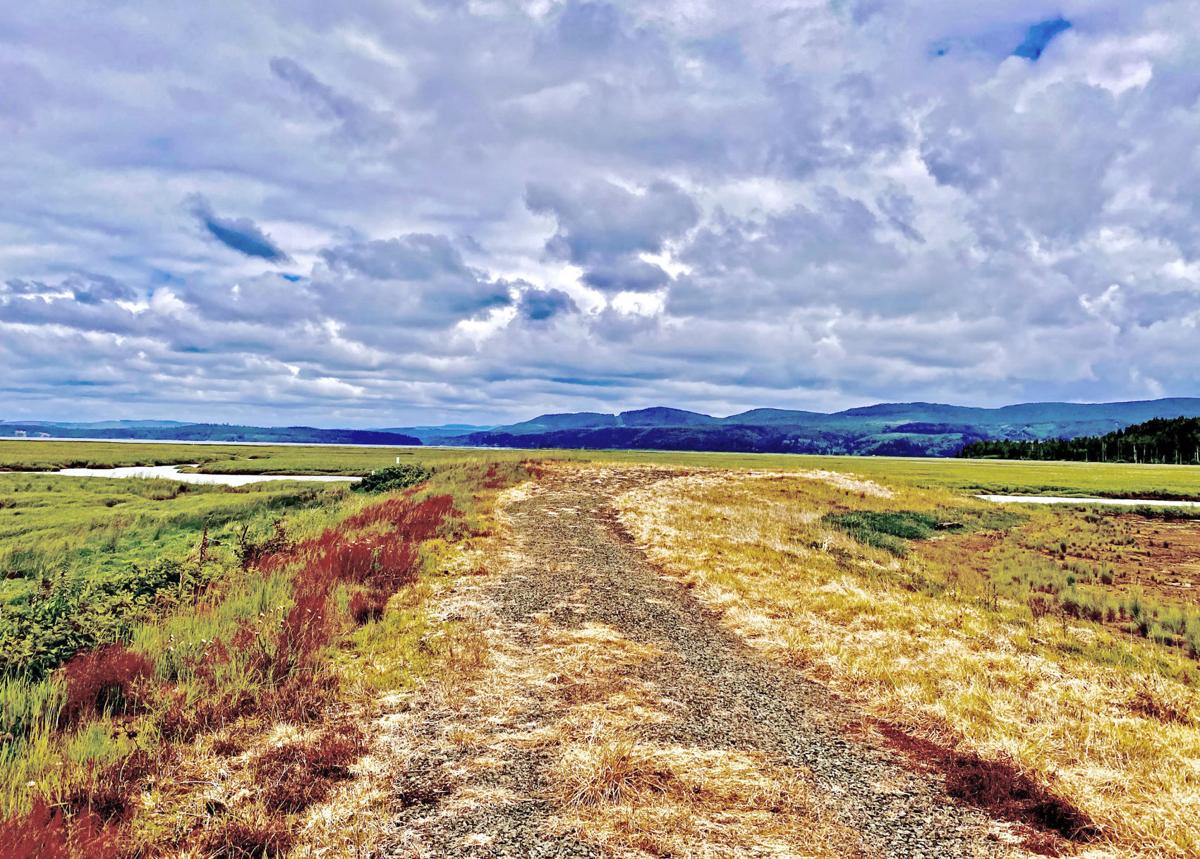 Storm clouds gather over Willapa Bay. This dike and others used to curve around most of the bay’s southern shore. Now, the southern tideflats are returning a more natural condition. 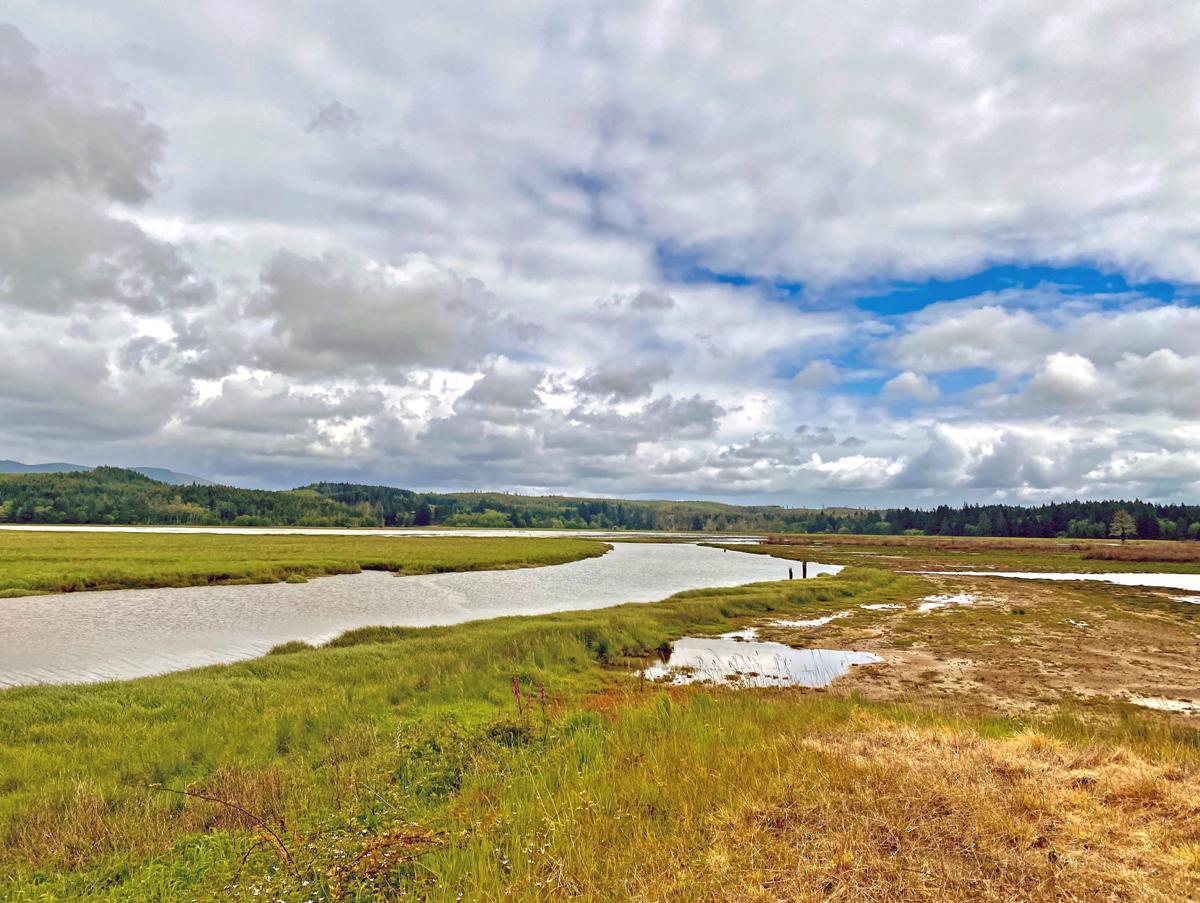 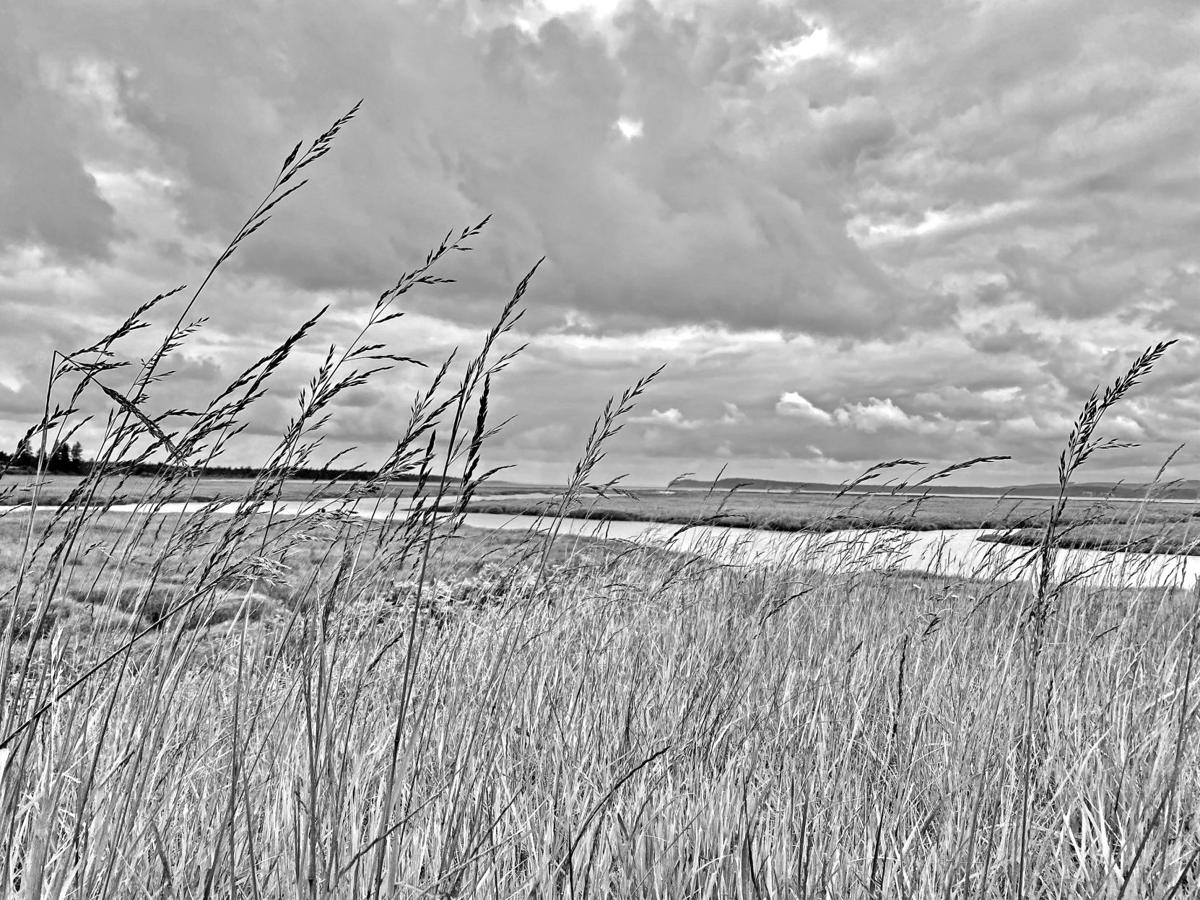 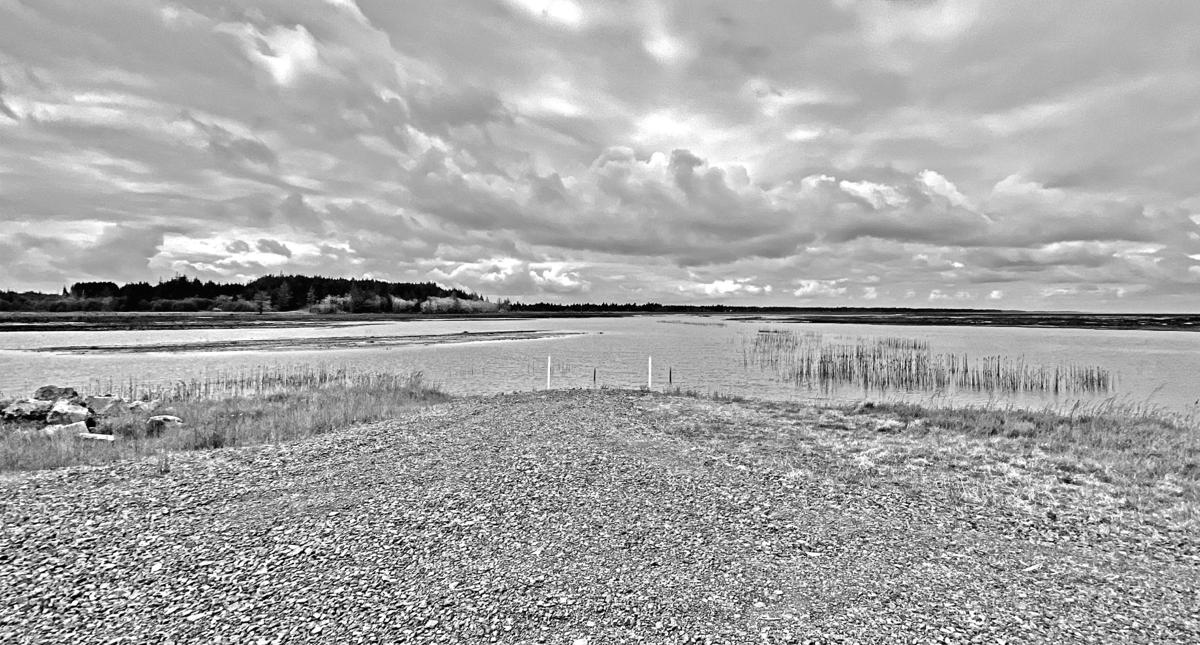 A graveled ramp in the Reikkola Unit of Willapa National Wildlife Refuge is a perfect place to laucnh kayaks. 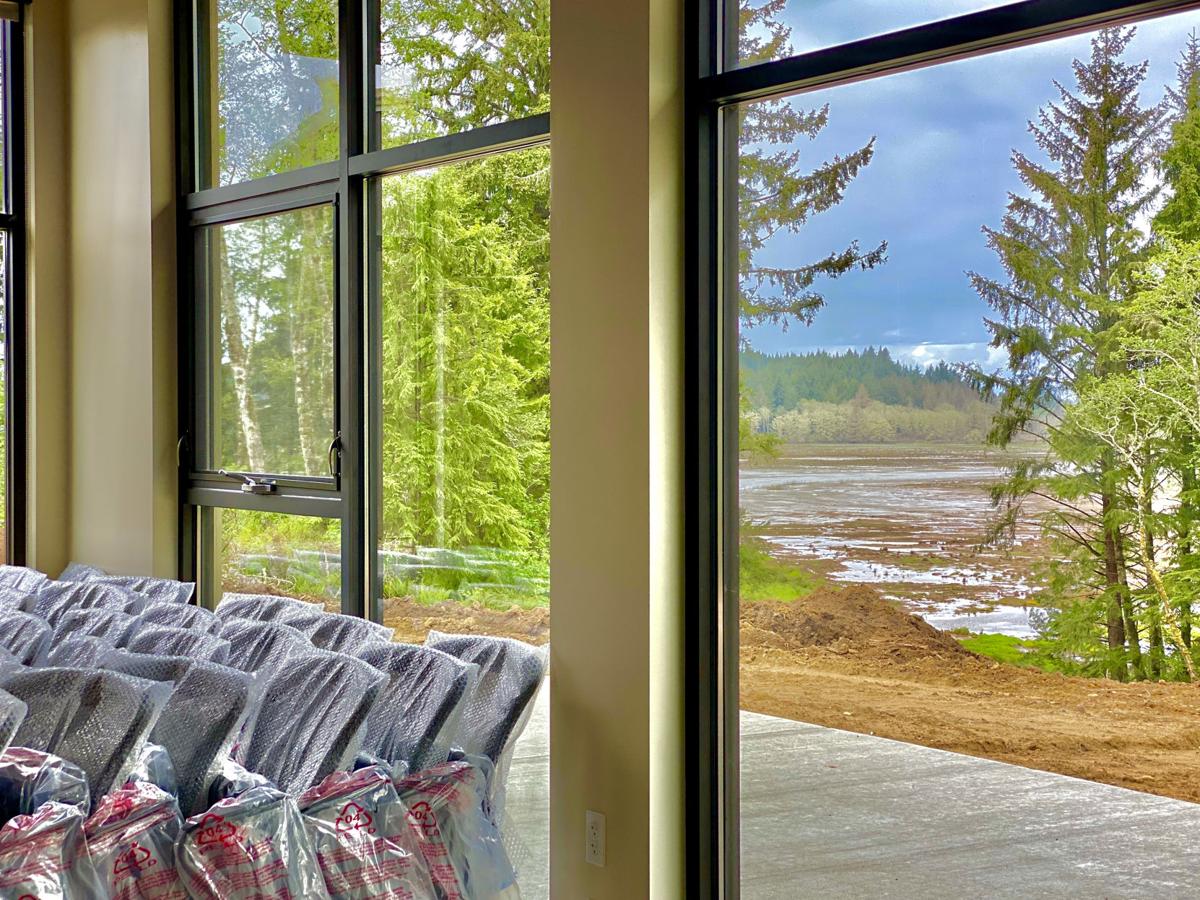 A meeting space in the new Willapa National Wildlife Refuge headquarters comes with a view of the bay’s southern tidelands. 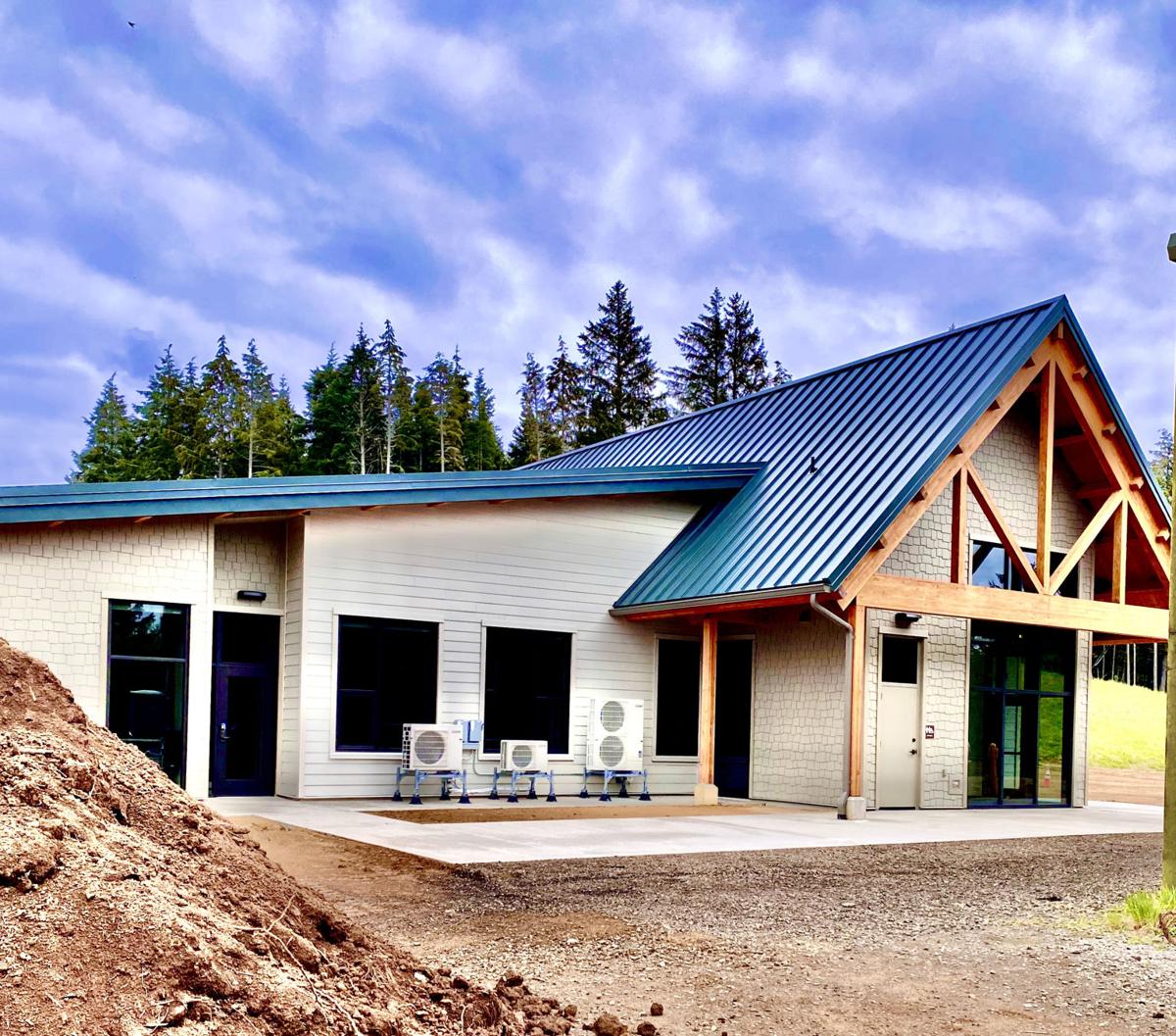 Willapa National Wildlife Refuge’s new headquarters at the eastern end of 67th street east on Long Beach is well on its way to completion.

Storm clouds gather over Willapa Bay. This dike and others used to curve around most of the bay’s southern shore. Now, the southern tideflats are returning a more natural condition.

A graveled ramp in the Reikkola Unit of Willapa National Wildlife Refuge is a perfect place to laucnh kayaks.

A meeting space in the new Willapa National Wildlife Refuge headquarters comes with a view of the bay’s southern tidelands.

Willapa National Wildlife Refuge’s new headquarters at the eastern end of 67th street east on Long Beach is well on its way to completion.

As a young man, I hunted the south tidelands of Willapa Bay, an area known today as the Riekkola Unit or the South Bay Unit of the Willapa National Wildlife Refuge. My mission was to shoot the majestic Canada goose — the Tavenger honker, or to be more specific, the largest and most majestic of the geese that feed on the rich green grasses that grace this estuary. At the time, the alluvial fields lay behind man-made dikes that snaked beside the bay and restricted the natural flow of bay waters surging off the Pacific Ocean and into the Willapa. Though I seldom fire my old double-barrel shotgun anymore, happy memories linger of my hunting excursions.

In the last decade, the landscape has changed dramatically. Gone are several miles of dikes. Those have been replaced by thousands of acres of tidal flats and the return of the natural ebb and flow of the saltwater. Along with the reappearance of indigenous habitat — fish, plants and an unobstructed view that extends this exquisite panorama for miles and miles — is now an offering akin to the gift of a basketful of fresh wild mushrooms.

This project is the culmination of a decade of hard labor by many U.S. Fish and Wildlife Service employees, but particularly, this dream was spearheaded by a determined and vigilant woman by the name of Jackie Ferrier, the project manager of this wildlife refuge. Another organization, the Friends of Willapa National Wildlife Refuge (let’s call them The Friends) chipped in mightily.

The mission is simple: Wildlife first. Every national refuge is established in law for the conservation of a particular species (the Columbian white-tailed deer in Cathlamet, for example) or a suite of species. The Willapa unit’s mandate is the conservation of migrating birds. Stand on the tideflats or beside one of the hundreds of sloughs that inundate this estuary and one quickly reaches the conclusion that, indeed, the confluence of waterfowl, and their swelling numbers (a quarter of a million a year), is dramatic and generally in synch with the rapid beating of a heart. The area is vast — and so is the array of waterfowl, songbirds and raptors. Otters swim their enchanting way up and down the sloughs, deer and elk roam, and bear maraud. This land is their land!

Linking the refuge’s far corners are two new trails, each weaving through the Willapa Hills, through the tall evergreen and then alongside the borders of the refuge at tideland. Here are hundreds of acres of bird hunting from the eight waterfowl and goose blinds to further access of boundless acres that crisscross the march lands on the edge of the Willapa. Hunters are allowed to trek across this vast pristine landscape. Lo and behold: Fees have been dropped to encourage refuge use.

On the hillside overlooking the lovely visage is the refuge headquarters. A new office headquarters is nearly completed, and it’s a beauty. Its offerings and benefits will be many. A second project calls for an expanded visitor’s interpretation center. All this is attributable to Jackie, her dedicated staff and hundreds of supporters including The Friends.

The visitor’s center will temporarily be housed in the new office building and later moved to its own facility. Refuge expansion will also include an expanded network of trails for visitation and exploration. School excursions are part of this plan.

Tarlett Slough extends easterly from Pioneer Road at 67th. Trails and viewing platforms punctuate this large slough and culminate on a ridge, perhaps a half-mile from trailhead. From this knoll, a spectacular view unfolds of the south end of Willapa Bay that can happily compete with many of the extraordinary vistas in Southwest Washington, and certainly with other National Parks that scatter across our country. A plan to enhance this vista is in the works with a viewing platform and indigenous plantings. If a person takes in the entirety of this project; takes in the miles of bay and shoreline and the perpetual dance of sky with the kaleidoscope of dynamic Pacific weather, then one can appreciate these efforts as the marriage of dedicated men and woman from our government, as well as an outpouring of energy from local participants.

On an afternoon when the weather was as changeable as a six-course feast, I visited with Ferrier. We walked along one of the recently developed trails that exposes the full extent of this huge refuge. We were joined by a family of four. The father, Dustin Wanke, lingered and began to express his appreciation for the refuge and the sacrifices of so many who had offered the opportunities for him and his.

“Making nature user-friendly,” he explained. “That’s ultimately important.” Wanke described himself as a fan of conservancy, as well as a conservative. “Balance,“ he stated. “A balance established between the needs of human beings and the importance of protecting our environment.” He essentially suggested that the Riekkola Unit achieves all that in spades. “Launch your kayak, pop in a slough and paddle to the bay — the opportunities are many.”

Ferrier was so pleased to hear kudos from one of the Peninsula’s faithful that her face lit up like the intermittent sun ball that briefly burst through the pewter-colored clouds.

“Connecting,” she said. “The project is reconnecting the natural evolution of plants, animals and the tidal water of a bay we think of as ours, as home. “

“I could have left (the Peninsula),” Wanke said. “There were opportunities. But I love it here.” Truth be told, you could not drag him away.

We stopped at Parker Slough and I marveled at its reincarnation. All around, the new landscape — just like the unspoiled bay of long ago — unfurled in the soft afternoon light. The edge of the bay had been resurrected and reborn to the eye’s delight.

“Our job is to reconnect nature, all its intricate offerings. At the same time, we seek to connect with our citizens. How can the project like this fail?” Ferrier asked.

The economic impact is clear to see. So is the physical and emotional. In an age when human beings congregate in massive numbers, and quarrel incessantly, here is an opportunity to explore a rare and pristine environment as well as a trumpeting of joy that can be shared by all. Here is Willapa Bay at its finest. Build it, and they will come. Or more aptly put: It’s happening here, and the benefits are as far reaching as the long tongue of tides, and the living, breathing entity we call Willapa Bay.