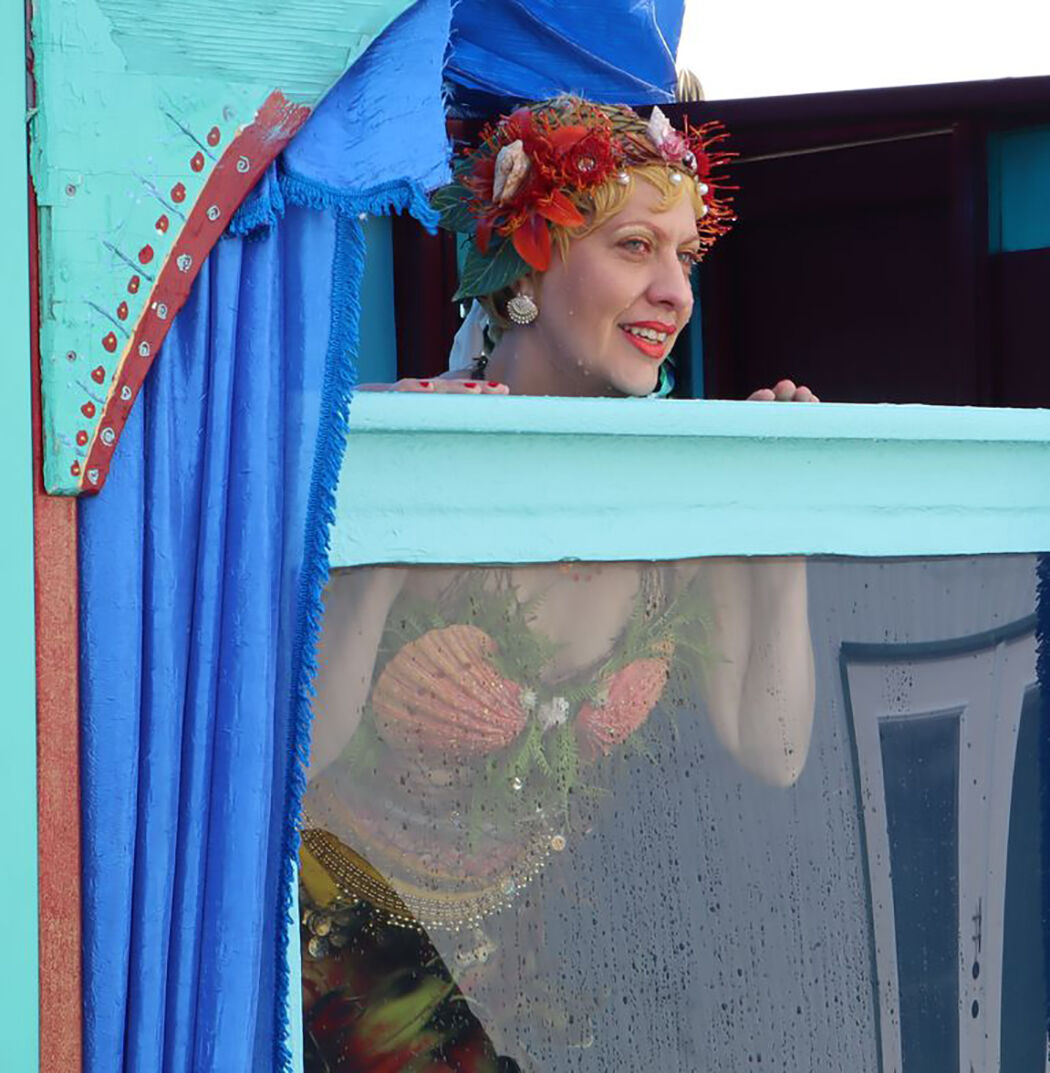 Una the Mermaid is based in Portland. 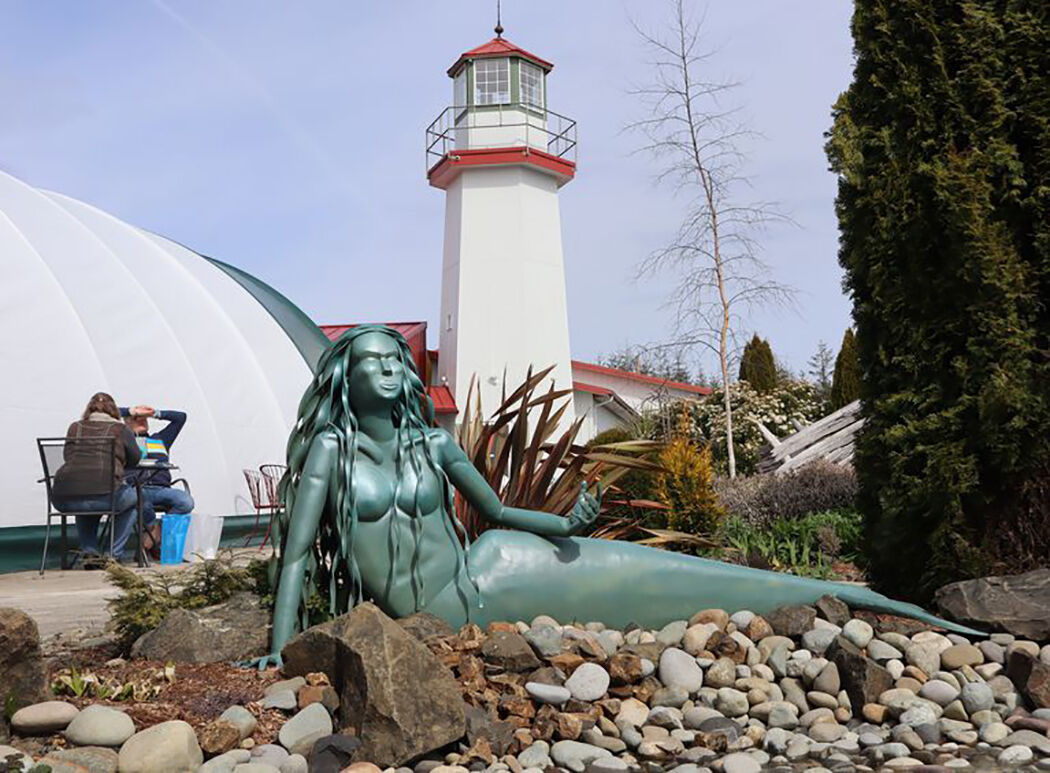 Mermaid sculptures adorn the grounds of the mermaid museum and adjacent Westport Winery. 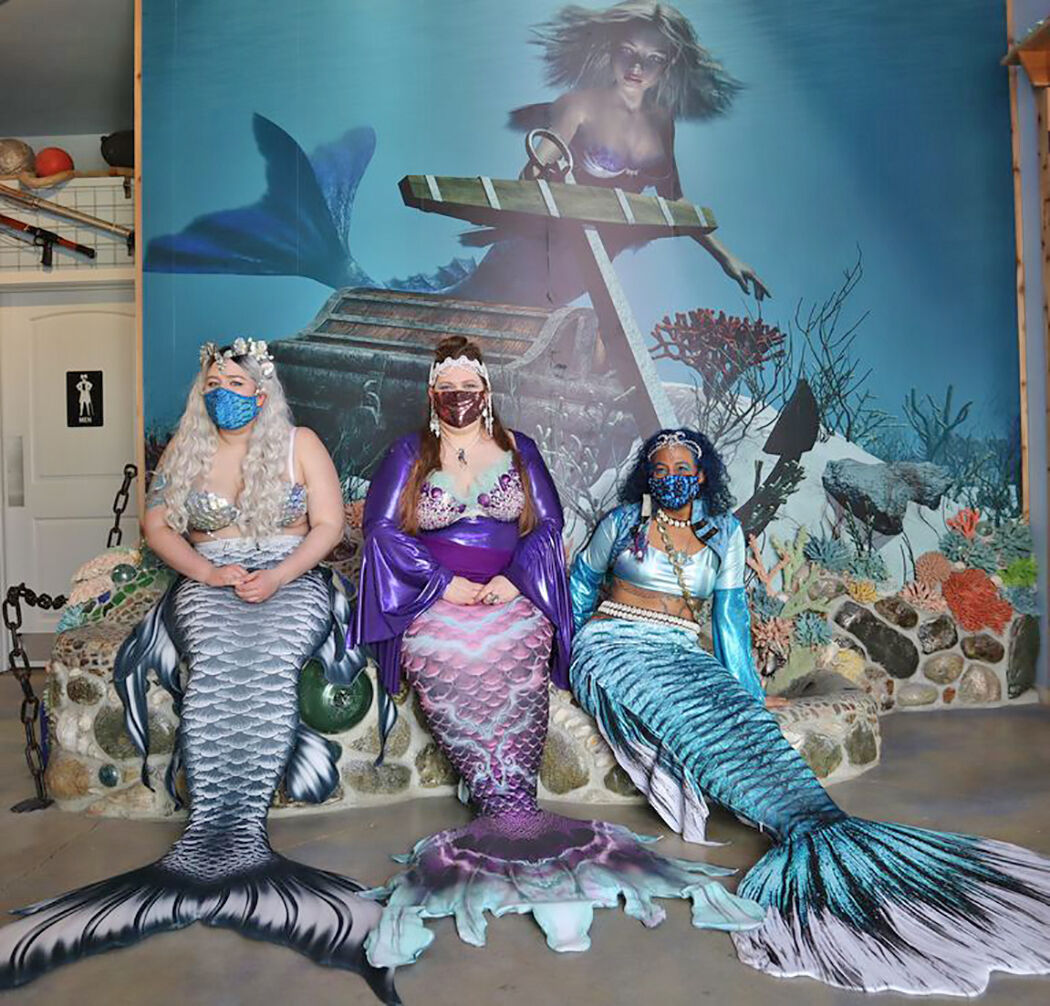 From left, Mermaid Siren Ophelia of Seattle, Mermaid Asherah and Mermaid Merina both of Portland, at the opening of the new International Mermaid Museum. 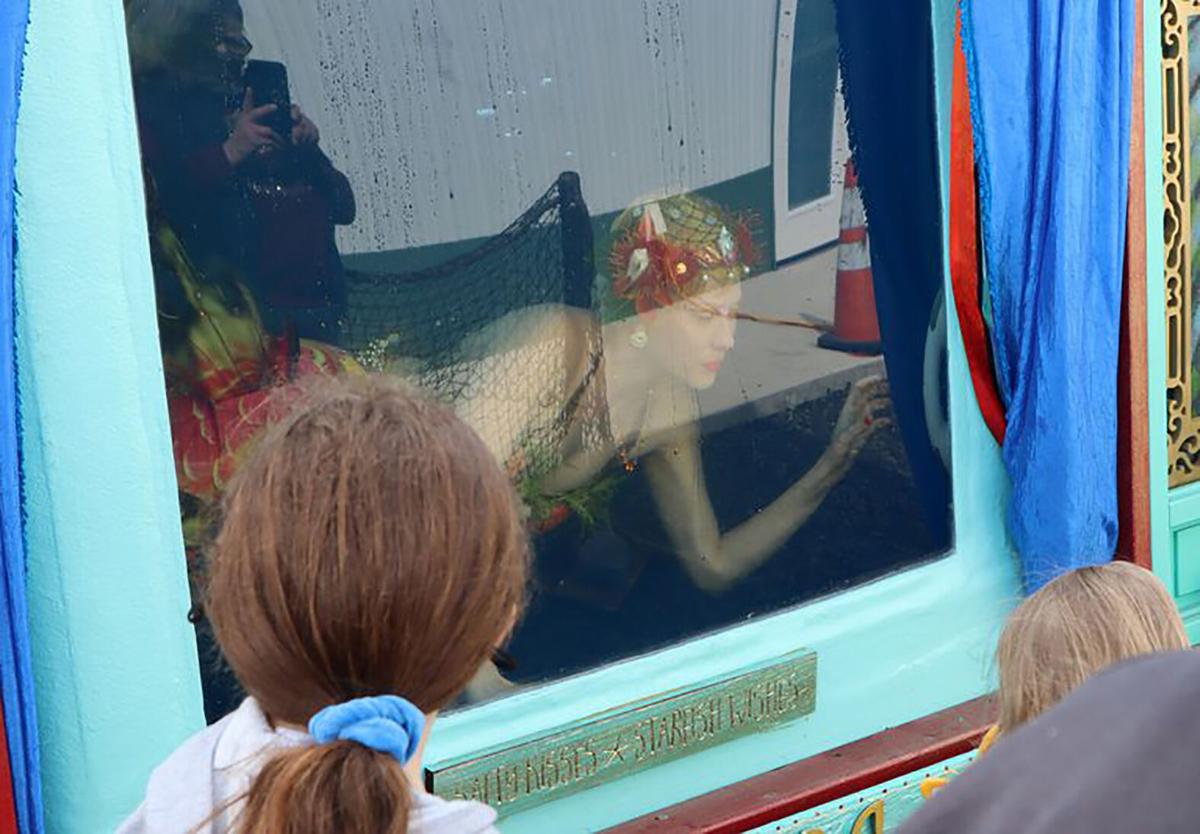 Una the Mermaid mesmerized youngsters who flocked to her traveling show tank, which was parked beside the new museum.

WESTPORT — The Pacific Northwest might seem like an unlikely place for mermaids and mermaid culture to catch on given the cold water here. Yet, putting on an eye-catching tail and pretending to be a mythical sea being is a thing across the Northwest, including on the south Washington coast.

The museum’s grand opening this past week accounted for multiple mermaid sightings. One was spotted playing a harp. People observed another with a gray and white tail reclining on a mermaid throne. Yet another, get this, appeared at a book signing.

The liveliest mermaid twirled in front of the underwater viewing window of a traveling show tank painted in turn-of-the-century circus wagon style. The tank belonged to Una the Mermaid, a 41-year-old professional entertainer from Portland.

“There is something magical about the silence of being underwater,” Una said during a break from swimming in the 90-degree water of the converted dunk tank. “Then hearing music and then seeing little ones approach and getting excited. I just love that. I love that magic. I like making people happy.

A steady stream of parents and children bubbled with delight when the half human-half fish creature periodically reached over the lip of her tank to give gifts of sea shells. Una inhabited her mermaid role so thoroughly, she declined to give her “Muggle” or human name.

Una said she missed out on some of her childhood because of abuse. She said she took on the mermaid identity around 2012 in part to connect with her daughter in a playful imaginative way.

“Also, [it was] a journey of how I found my own personal healing as a survivor of family trauma and violence,” Una said. “And reconnecting with one’s inner child and helping others to reconnect with that as well. That’s a big part of who I am and why I do what I do.”

The grand opening of the International Mermaid Museum near Aberdeen provided an occasion for many mermaids to gather. Una said a grouping is called a “pod,” as with whales. An aggregation of mermaids can also be called a “gossip,” by some accounts. The Portland area is home to several pods whose following has grown sufficiently to stage the annual Portlandia Mermaid Parade in summers since 2015.

Seattle, Spokane and Vancouver, Canada, also have sizable pods. The merfolk include men and women and welcome all body types. Some people splash into mermaiding as a hobby or for exercise. Others make it a side gig by hiring themselves out for birthday parties, events and photo ops.

The Mermaid Museum is a project of the Roberts family, which also built the Westport Winery Garden Resort. The museum is located next to the winery about halfway between Aberdeen and the coastal beaches.

“Four years ago, it started to matter to me what I was leaving,” Roberts said. “We didn’t know if I would still be here today. This is my thing, this is my legacy.

A family friend’s donation of a massive shell collection got the ball rolling. The museum displays feature lots of mermaid mannequins. There is also a World War II dive helmet used at Pearl Harbor and a 300-year-old wooden carousel carving of a mermaid.

Roberts said there’s a point here besides conveying mermaid lore. She wants each exhibit to teach ocean ecology, too.

“The mermaids are the spoonful of sugar to make the medicine go down,” Roberts said in an interview after the ribbon cutting. “Because if we just built an ocean ecology museum, I’m not sure it would have as much interest as a mermaid museum. But we can tell both of those stories together.”

Admission to the new museum is free during the month of April, if not longer. For visitors intrigued by mermaiding, the next to last display alcove includes information about how to join the scene. Key pieces of advice include how to choose the right monofin and to never swim and dive alone.

After conversing with the professional mermaids at the museum opening, Shelton, Washington, mother Rochelle Freeman said she came away inspired to plunge in.

“As a kid I always imagined myself as an ocean creature,” Freeman said. “I got my first monofin last year. I made my own mermaid tail at home. So, that’s been really fun and a cool way for me to express my artistic side during all this COVID stuff going on.”

Freeman says she was introduced to mermaiding by YouTube videos.

“I’ve just been seeing it online. So to actually meet ladies doing it all the time and actually seeing it as a reality is really awesome,” Freeman said.

The museum opening also offered a showcase for another pandemic project, the book release event for “Mermaid — A Dream Made Real” by Aura Stiers of Poulsbo, Washington. The performance artist made for an unusual sight among many arresting sights with her large, bright orange tail poking out from under a table arranged with a stack of picture books ready to sell and sign.

“I love being a mermaid,” Stiers said. “It’s so much fun to see people’s eyes light up when you come into a room and stuff like that. It’s the most fun thing you can do. If you’re following your passion, I mean you’re not really working. It’s never work.”

Why this new rapid coronavirus test could be a game-changer