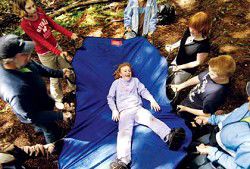 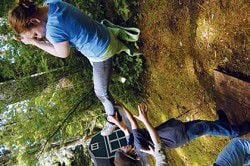 <I>DAMIAN MULINIX photo</I><BR>Jadie Cobb swings across to "Prouty's Landing" where she is caught by classmate Taylor Zinn.

<I>DAMIAN MULINIX photo</I><BR>Jadie Cobb swings across to "Prouty's Landing" where she is caught by classmate Taylor Zinn.

"It looks way higher when you're standing up there. And it's scary in mid-air because you don't think anything is there at first. It feels like you fall forever," said Chelsea Smallwood after her successful attempt at the trust fall challenge at Bruceport County Park last Friday.

"The stronger you are with these skills, the less chance you that you're going to be at risk for drug and alcohol or [other] problem behaviors," said Kevin Beck, assistant director with PHHS. "We're working with all kids, not just certain kids."

Beck works with Pat Shults, prevention coordinator with Providence Addiction Recovery Center, which contracts services with the county to provide prevention services in schools. Though there is no emphasis put on drug prevention within the program, Beck said he believes that if the students develop the "10 essential skills," they will indeed learn to say no to drugs. The skills they identify are: communication, cooperative teamwork, conflict resolution, decision making, goal setting, risk taking, leadership, relationship building, self confidence and self esteem.

"We feel they're important for lifelong success," said Shults.

Beck said that by going through the course, made up of eight challenges, those skills will be put to good use, especially if they want to be successful on the course.

"Basically you have to work on communication, teamwork and problem solving in order to be successful on the challenge course," he said. "It really forces those skills to come together."

With each visiting class, the kids are separated into small teams of five to 10 students. All of the obstacles they face on the course are team-oriented and require participation and interaction by all on the team.

"You can't be successful individually; it takes everybody working together to be able to accomplish it," said Beck.

This is perhaps most on display at the trust fall - a four-foot-tall platform where one participant falls backward into a mat held by teammates.

"You have to count on them, trust them, and that may not be happening in the classroom," said Shults.

The Adventure Days, which began on May 8 with a class from South Bend, is the first of its kind here. The program was recently given control of the land at Bruceport Park by the county in order to create the course - which is closed to the public.

"The feedback we've gotten is that classes would like to come out twice a year," said Shults. "We're just really glad to get the course built and get every sixth-grade classroom out here."

"I really like taking kids outside of the classroom, where they have to count on each other and interact, communicate in order to accomplish a task," said Beck. "You've got kids stepping up in roles that they don't have that opportunity to operate in."

Shults said that is an important element to the program, where they are offering opportunities to do things outside of what sixth-graders normally would. Shults agreed that students may be identified in one way or another and on the course they have an opportunity to shine in different ways, to step up and be a leader. Beck said it is interesting to see different roles emerge even just throughout the short course. One student may start out shy but end up a leader by the end of the day.

"That quiet kid hanging back maybe all of a sudden has the idea for how to solve a certain problem, and they step up," he said. "There's a role for everybody."

Over at Prouty's Landing, another group of students was working to cross an imaginary ravine, on their way to an imaginary wildfire. But first they must capture a rope swing that is out of their reach. The group discussed a plan that saw them doffing their sweatshirts and tying them together in hopes of lassoing the rope. Once in hand, the students had to one-by-one swing across and land on a small platform. As the platform became full, the students swinging had to rely on the others to catch them and help them to land. One student said he learned a valuable lesson from this and other obstacles.

"Teamwork can get a lot of things done, and with teamwork you can make friends and stuff," said Tanner Hovan. "Even though it can be hard, it can also be fun, too."

Listen to leaked call of Trump bashing Fauci to his staff

Political analyst: Is Trump running a campaign from 1954?