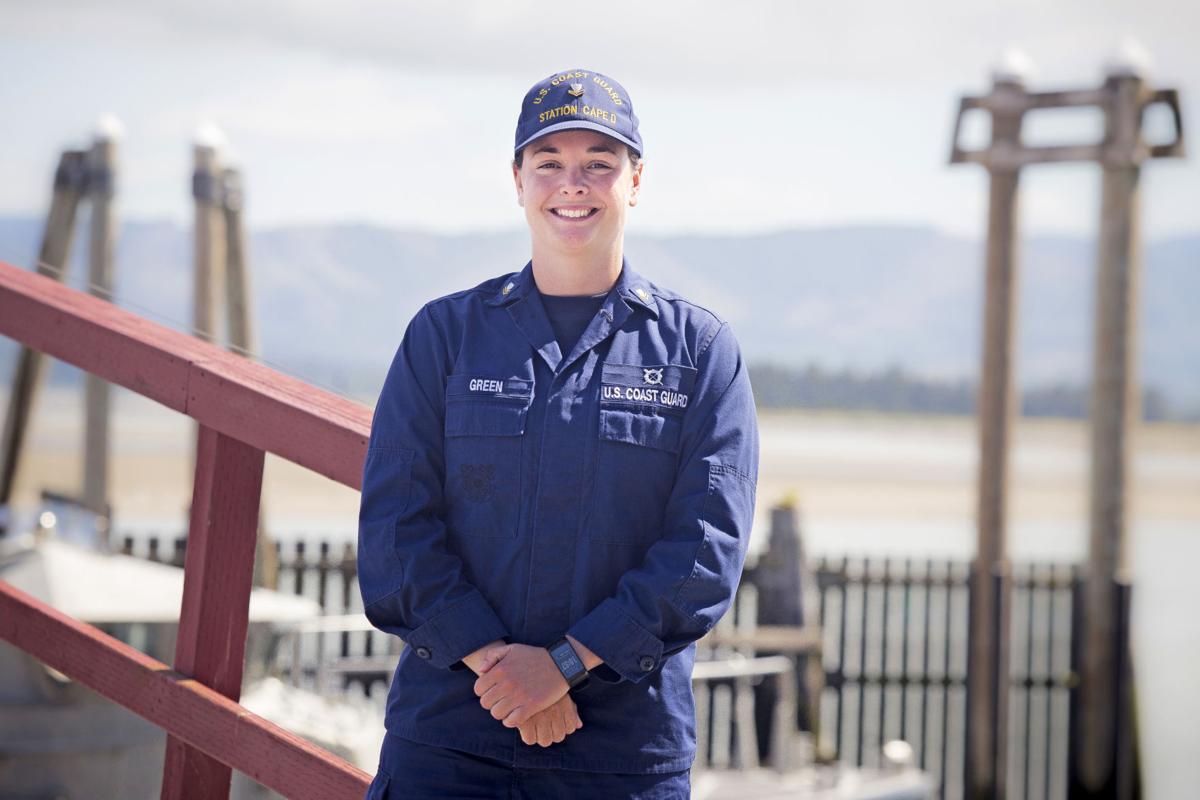 In September 2019, Amanda Green, 28, became one of four active female surfmen in the U.S. Coast Guard among more than 40,000 Coast Guard members nationwide. 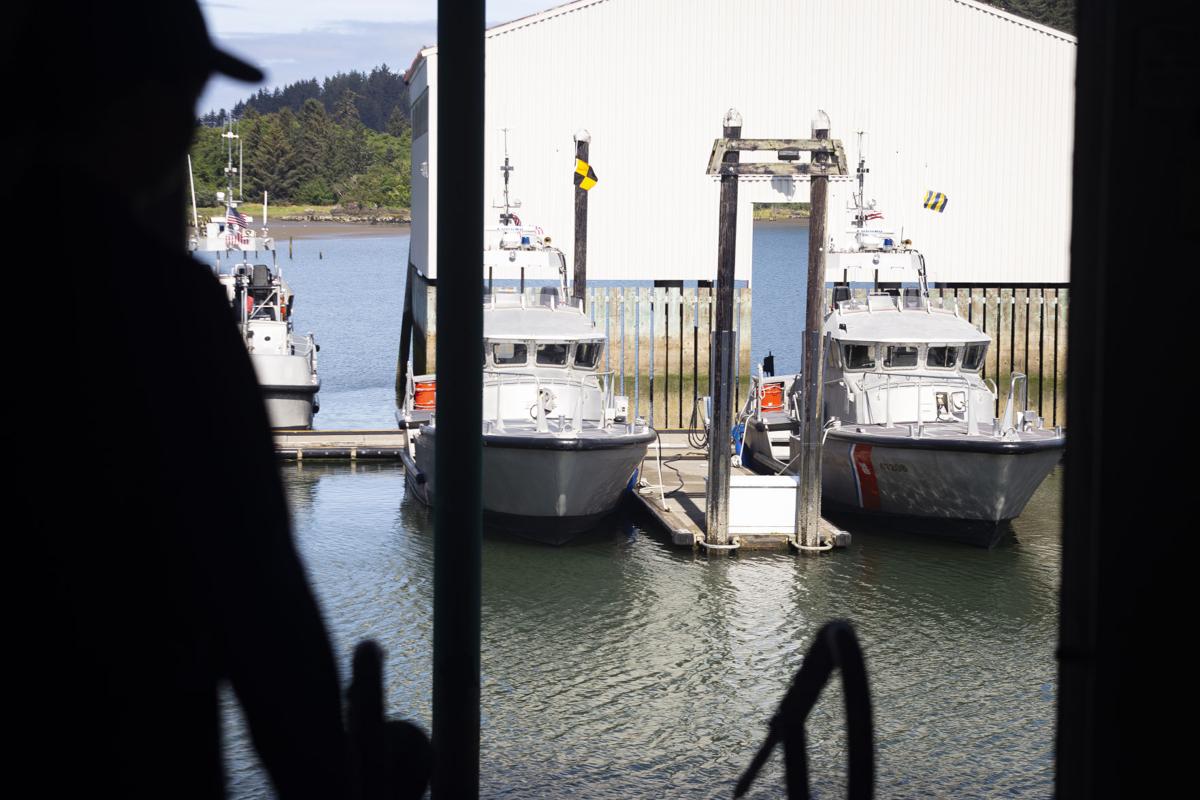 Green was a young girl when she watched a movie about a fishing vessel and crew lost at sea and the frantic Coast Guard rescue that followed. “I remember seeing movies like ‘The Perfect Storm’ and thinking how scary it would be to be on that boat or be the person who has to go out there and save people. It was a fear of mine I wanted to get over and pursue,” she said.

The 47-foot motor lifeboat has self-righting capabilities, allowing the vessel to survive being capsized and return upright in under 30 seconds.

A common misconception is Coast Guard boats are rolled intentionally.

“Even though the boats do roll over, a lot of people think that we get underway and just roll them,” explained Green, who has experienced a few "knockdowns" but never a "full roll."

“The boat is designed to come up if you find yourself in that situation, but that’s our biggest training — we don’t try to roll the boats at all.”

Green only has one superstition once underway:

“Nope, not really,” Green said when asked about any tricks to overcoming seasickness.

“The book says don’t be below deck, get fresh air. A lot of people bring ginger or ginger ale — that seems to help.”

ILWACO — Amanda Green was a young girl when she watched a movie about a fishing vessel and crew lost at sea and the frantic Coast Guard rescue that followed.

“I remember seeing movies like ‘The Perfect Storm’ and thinking how scary it would be to be on that boat or be the person who has to go out there and save people,” Green said. “It was a fear of mine I wanted to get over and pursue.”

With more than 40,000 Coast Guard members nationwide, Green is in rare company. Across 21 active surf stations in U.S. there are 200 active surfmen, and only four are female, including Green.

One of the others is Lt. Jessica Shafer, 39, commanding officer at Station Cape Disappointment.

Where the Columbia River meets the Pacific Ocean is unique and dynamic environment, where surging river water collides with ocean current and groundswell creating some of the most turbulent water conditions anywhere in the world.

The approximately 18-square-mile-area — where swells sometimes combine with waves exceeding 30-feet — is well plotted, and vessels cross according to the tide, when conditions are most ideal.

A series of rock jetties help hold the once-shifting shoals and sandbars in check, areas named after famous shipwrecks, like Peacock Spit, acquired after the sinking of the 118-foot U.S.S. Peacock in 1841.

Peacock Spit, located on the north side of the Columbia River entrance, is one of thousands of shipwrecks in the greater geographical area regarded as ‘The Graveyard of the Pacific.’

“We have Clatsop Spit on the south side and then around North Jetty we have Peacock Spit,” Green said.

“Peacock is the worst part of the bar. It’s dangerous because you have waves coming from different areas. They refract and bend around the jetty if there’s a northwest swell. Swells come in and bounce off the south jetty and collide with it. There’s not only the swells but the current.”

Green’s fellow surfman and commander, the station’s Shafer, shares her obsessions about the Columbia’s treacherous entrance. She told the Seattle Times this summer, “That’s what will keep me up at night. It’s always in the back of my brain: What’s the bar doing?”

Green said the conditions around the bar are worse than anywhere else she’s been stationed, including South Carolina and New Jersey, where waves were sometimes choppy but not as big or unpredictable.

“Pacific storms have miles and miles to travel. They can build a ground swell up. It’s more defined when it hits the coast. If you look at the contour leading up to shore on the West Coast it’s like a shelf, it’s deep until all of a sudden it hits the shallower water. When the waves come in you’re getting all that power that’s traveled miles and miles, versus the Atlantic Ocean where they’re locally driven and you get choppy swells. The shelf leading up to the shoreline on the East Coast is more gradual, which can disperse the wave energy as it comes ashore,” she said.

The Coast Guard Station at Cape Disappointment, with roughly 55 active personnel, conducts an average of 450 to 500 search and rescue cases annually.

“We get a lot of cases,” Green said. “In the winter months we see more commercial cases like the crab boats. Those cases are more complex because we have the seas, wind, rain and shorter days. In the summer time we see more recreational cases, the smaller boats. They’re typically quicker.”

The past year came with several memorable experiences for Green, including a January nighttime case on the 52’ Triumph responding to a distressed vessel roughly 15 miles from the mouth of the Columbia.

The vessel was the Lisa Marie, a fishing vessel renowned for appearing on The Discovery Channel series “Deadliest Catch.”

“She was DIW (Dead in the Water), about five miles offshore of Ocean Park,” Green recalled. “We were out there for 15 hours towing them in — that was a memorable case for sure. I realized at that moment that I could accomplish whatever was thrown at me.”

Attaining each qualification brought new challenges for Green, a Pennsylvania native who joined the Coast Guard in 2012 before joining the station at Cape Disappointment in 2015.

“They’re all difficult in their own ways, but in my opinion the most difficult to get here was the basic coxswain on the 47, because you have to know everything,” Green said.

“The heavy-weather training had more extreme surf, you have to know how to handle the boat in bigger seas,” she said. “Surf training was the most fun for sure. Just the training and putting a motor lifeboat in the surf is pretty fun. Nobody else in the Coast Guard can really say they’re able or can do that besides surf units. It’s definitely a well-rounded training environment. Everyone has to be on their game with communication on the boat, just relaying the ranges and telling whoever is on the helm where they’re at in the zone. We work together well as a team.”

For anyone considering a career in the Coast Guard, Green said to stay focused and embrace small achievements along the way.

“I’ve been here for four years in October, so I made surfman after three and half years of being here,” she said. “There were many small goals within that.”

Green compared the evaluative process of becoming a surfman to a running a race.

“It’s like running a marathon, you see the main goal of it, but you don’t see the small goals a long the way,” Green said, comparing each qualification to adding a mile to endurance.

Getting pinned as a surfman in April was a momentous occasion for Green, who coincidentally ran her first half-marathon in June, but not what she considered the best part.

“The ceremony was pretty cool, but the journey was the best part. It’s the experience and the friends that you make.”

MD: THIN MINT CHALLENGE TO HELP THOSE IN NEED

Cooper: Trump's a little man, despite his girth and size