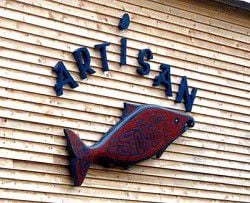 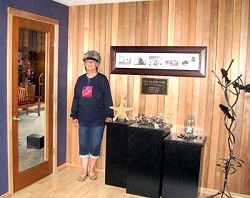 Donna Rew in the entrance of the newly remodeled lobby of the Artisan building in Ilwaco. She and her husband, Truman, have completely transformed the vintage building since they purchased it two years ago.

Donna Rew in the entrance of the newly remodeled lobby of the Artisan building in Ilwaco. She and her husband, Truman, have completely transformed the vintage building since they purchased it two years ago.

ILWACO - A gently used vintage building in downtown Ilwaco has been transformed by Truman and Donna Rew into an expansive multiuse space.

Artisan, at 114 Main St., will host the Peninsula Clay Artists show and sale Aug. 13 to 15. But the building has hosted a number of events since the Rews took possession two years ago and began extensive remodeling.

Chris Jacobsen's former sign shop is now a large studio space where artists can work on pottery, stained glass, wood-working, glass-blowing or any number of projects. Jackson Pollock-like paint spatters on the concrete floor are all that remains of the sign business and Donna Rew says she's going to have Jacobsen sign the floor. There are two large kilns and two small kilns for potters, a potter's wheel, and cutting equipment for stained glass work. "It's messy," she said, but that's not a problem. The studio already was used this year by a group of seventh- and eighth-graders who did pottery projects and donated 100 pots for a PACE fundraiser.

During its long life, the building also housed, among other businesses, the Taylor Lumber Co. in the 1940s and it was the Victor Roofing Co. for a while. "It took us 15 months to get it up and running," Donna said. "The floors are all original. When we got it, the only thing holding it up was the piles of 'collectibles' cramed into every available space." A little creative scrounging by Truman Rew is evident in the reclaimed barn boards and lumber he found at auctions. "It's the first time I've been able to slow him down long enough to have some fun," Donna said.

Now the spruced-up main entrance contains old photos of the building and a brass plaque commemorating the folks who had a hand in the restoration - Truman Rew, his son, Steve, and Brian Dudley, Donna's son-in-law. Salvaged barn doors and rails with handles from Italy lead to the two-story event and classroom area where a large room that includes a stage has already played host to several big parties, including a going-away party for former Ocean Beach School District Superintendent Rainer Houser and an Ilwaco High School jazz band fundraiser. The annual Ocean Beach Education Foundation auction will be held there in September.

Several local bands and musicians use the space for practice and artist Eric Wiegardt held a watercolor class in the spring. "All together, there's room for about 250 people," Donna said. That includes an adjoining room with a full kitchen and a restroom that features a slate countertop and glass-bowl sink with shiny pebbles and Swarovski crystals, a souvenir from when the Rews owned Nautical Brass at the Port of Ilwaco.

A patio garden on the west side of the building is a work in progress designed by Donna and her son-in-law and will soon feature quaking aspens, a wind, water and motion art garden and a gazebo designed and built by Truman, with plenty of room left over for a large tent for outdoor events. "The building can be a lot of things," Donna said, adding that she hopes to host holiday parties and a winter artists' fair.

Outside, Artisan is covered with cedar siding and a Truman-made sign featuring a large wooden salmon rescued from the old Dog Salmon restaurant in Long Beach. The sign on the corner was salvaged from Marie and Randy Powell's Shoalwater Gallery at the port. "We're the first thing people see when they come off the east end of the Discovery Trail," Donna said.

Upstairs, a bright roomy space is available for classes such as life drawing or yoga and it could be used as a gallery. Truman, his son and Dudley designed and built the sturdy stairway and salvaged numerous windows to let in the light year round. "The building took on a life of its own," Donna said.

The first big artists' show will be held this weekend when the Peninsula Clay Artists hold a show and sale which opens Thursday and coincides with the August Port of Ilwaco Art Walk, from 5 p.m. to 8 p.m. The show features David Campiche, Susan Raymond, Karen Brownlee, Renee O'Connor, Jan Richardson, Rodney Maxwell-Muir and Brigid Byrne and will continue on Friday from 11 a.m. to 7 p.m. and Saturday from 11 a.m. to 5 p.m. with raku and wheel throwing demonstrations.