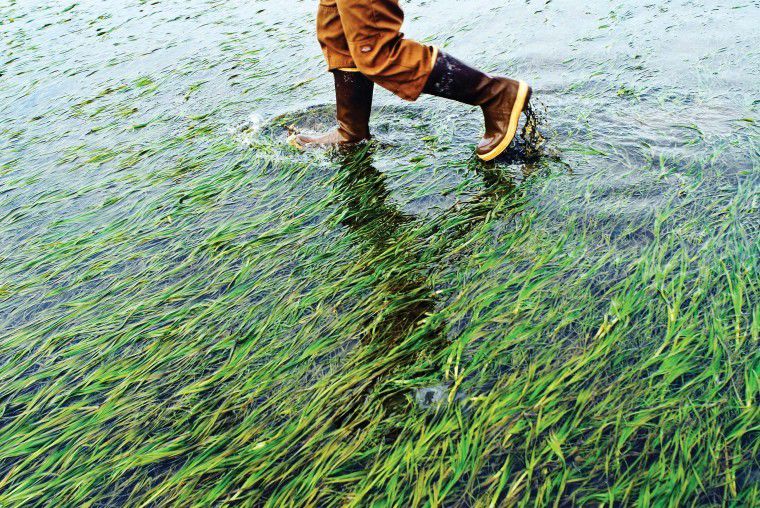 WSU research unit technician Nick Halderman sloshes through a field of intermingled eelgrasses on the Willapa Bay. Of the two types of eelgrass that grow on the bay - the native Zostera Marina, which is wider and longer, and the non-native and invasive Zostera Japonica - the Japonica has taken over much of the tidal areas of the Willapa Bay, negatively affecting shellfish production. 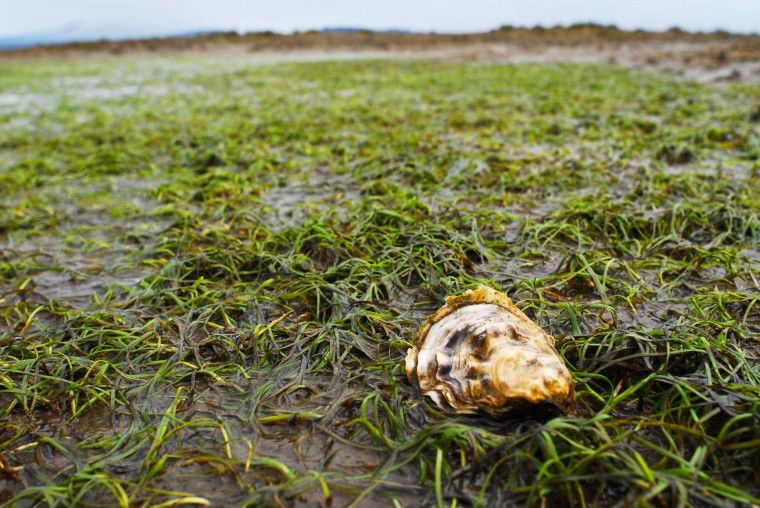 A native oyster sits on a dense bed of the non-native japonica grass on the Willapa Bay.

WSU research unit technician Nick Halderman sloshes through a field of intermingled eelgrasses on the Willapa Bay. Of the two types of eelgrass that grow on the bay - the native Zostera Marina, which is wider and longer, and the non-native and invasive Zostera Japonica - the Japonica has taken over much of the tidal areas of the Willapa Bay, negatively affecting shellfish production.

A native oyster sits on a dense bed of the non-native japonica grass on the Willapa Bay.

Jim Neva, MRC chair, said, Last year our conference was a two-day affair but that was too much. This year we decided on one day with a range of presenters and it went very well.

Change in the Bay is Normal

High on the list of crowd pleasers was Alan Trimble, Ph.D. and University of Washington research scientist, who spoke about what research, in some cases gathered over the past 50 years, tells us about the ecology of Willapa Bay.

Trimble had one general observation, Ecological change in the bay is normal and expected, which he illustrated by sharing a variety of graphs concerning salinity, temperature and pH balance.

When asked the million dollar question, at least in the minds of oyster farmers  Will there be a good set this year?  Trimble responded, I think there will be a set this year but perhaps not as big as folks would like or in the right places to make anyone in particular happy.

He continued, After all there has been a small set every year somewhere in the bay, but just not enough to always rely on for sustainable commercial exploitation.

Trimble also included mention of a fact many locals have observed that in the old days, folks used to check Ted Holways pear tree in Oysterville. This seemed to be as reliable predictor of a good set as anything else.

Another topic discussed animatedly during the day was the effect  positive or negative  of non-native eelgrass (Zostera Japonica) in Willapa Bay. Kim Patten, Ph.D., WSU extension officer and researcher at the cranberry extension and research unit presented a review of data entitled, Japanese Eelgrass, Friend or Foe.

Pattens findings were inconclusive. One of the problems, as stated by Patten, is to do an experiment correctly you need a control [in this case a portion of the bay that does not have eelgrass on it] but there is no part of the bay that we could use for a control, so we cannot study the effects of eelgrass at the scale of the entire estuary.

Patten had hoped to illustrate findings that proved statistically relevant effects of japonica on feeding ground for shorebirds, oyster spat and recruitment and other shellfish related issues. In 15 to 20 plots at different sites, Patten and his team took various measurements.

There were only a few statistically relevant data points, but none which painted a complete picture of the effect japonica is having on the bay as a whole ecosystem. In general, Patten said that it appears there is more oyster growth without japonica present and that the presence of the grass may inhibit softshell production by 44 percent.

It was earlier stated by Patten and others present that Taylor Shellfish had abandoned 10,000 acres of manila clam-producing tidelands to japonica; using this finding, that could represent a reduction in gross revenue loss of $4,000 per acre for softshell clams, a growing industry in the bay.

Other Points of View

Dick Sheldon, longtime resident and oyster farmer, made it clear that he doesnt like the stuff. I have watched it cover the bay. It lays over flat when the tide goes out, trapping fish, and makes the bottom into a kind of gumbo.

Sheldon talked about how some of the oyster growers are dicing under the grass but that this tends to just allow it to drift and take hold in other places. We considered it an annual and it was maybe four or five inches high but would die back in the winter. Now its several feet high.

Dan Driscol, of Oysterville Sea Farms also had clear and negative things to say about japonica. Its like trying to harvest through a shag carpet. It has really changed the environment and is not good for the bay.

It was noted by many in the room that non-native eelgrass had been designated as a noxious weed in California and that their state is proceeding with removal. Many present at the conference wondered how long our state and county officials would wait before addressing the problem.

Mike Nordin, past MRC facilitator who is moving to a full-time position as the Pacific County Director of Vegetation Management, had this to say, We cant do anything about it until officials tell us to do something about it. Anything new is going to be controversial.

Trimble weighed in on the matter by noting that there was a scientific report published in 1980 indicating that japonica was the number one threat to Willapa Bay. He also pointed out that it changes tidal height and dramatically changes inter-species relationships.

Patten feels that it may be impossible to eradicate the non-native eelgrass at this point. There are over 10,000 acres of it in and around the bay, he said. As Nordin said, Some people dont like chemical poisons and there are jurisdiction issues too.

Patten did indicate that without a management plan for japonica on commercial shellfish beds million of dollars in annual revenue and hundreds of jobs are at risk.

The morning began with a showing of the Keith Cox documentary, Willapa Bay Oysters, a close-up look at many of the oystering families and how they ply their trade around the bay.

The documentary, the first in a series, includes footage and clips that illustrate what it is like to farm oysters. It emphasizes that every oyster farmer has a different and unique way of seeding and harvesting his or her catch; and it emphasizes the inter-relationships between the oyster growers and the processors.

The documentary is offered for sale and can be viewed at Cox’s website http://willapabaydocs.com/.

Another portion of the day included a video lecture by Ray Hilburn, professor in the School of Aquatic and Fishery Science at the University of Washington, who published a recent article in the New York Times last month called Let Us Eat Fish.

Hilburn argues that the overall record of American fisheries management since the mid-1990s is one of improvement, not of decline.

Perhaps the most spectacular recovery is that of bottom fish in New England, specially haddock and redfish; their abundance has grown sixfold from 1994 to 2007. Few if any fish species in the United States are now being harvested at too high a rate, and only 24 percent remain below their desired abundance.

Hilburn did not comment directly on the many species of salmon on the endangered list but he did note that often there is a species conflict that exists; he mentioned specifically the numbers of sea lions and terns  both on the endangered list  that have grown in recent years and may be partially responsible for salmon decline.

Hilburn does admit that there are some species of fish  like the bluefin tuna  which exist in numbers well below the target set by the International Commission for Conservation of Atlantic Tunas. He noted that because these stocks are fished by international fleets, reducing the catch requires global cooperation and American leadership.

Hilburn went on to compare the ecological footprint of standard agricultural practices and the relatively much smaller impact of eating fish. We are caught between the desires for oceans as pristine ecosystems and the desire for sustainable seafood, he said. Are we willing to accept some depleted species to increase long-term sustainable food production in return?

After all, with fish off the menu, we will likely eat more beef, chicken and pork, he continued. And the environmental costs of producing more livestock are much higher than accepting fewer fish in the ocean, lost habitat, and the need for even more water, pesticides, fertilizer and antibiotics, chemical runoff and dead zones in the worlds sea.

Some might argue that agricultural practices need to be improved to address the concerns he lists rather than settling for the lesser of two evils  the possibility of depleting the oceans.

Multi-stakeholder Planning for the Ocean

The last presentation of the day, delivered by Paul Dye, director of Marine Conservation for the Nature Conservancy, was an overview of a new planning tool called Marine Special Planning. Dye was joined by a consultant working on the project, Jennie Hoffman, Ph.D., and senior scientist and director of projects for EcoAdapt, a non-profit organization focusing on climate change education and planning.

Hoffman said, Climate change is real  its not a problem of the future, its a problem of now. We need to change the way we look at conservation and resource management in order to ensure the future of ecosystems.

Hoffman used a sample list of concerns and issues that often find their way onto a water resources agenda and noted that climate change was a single item on the list, rather than something that was going to affect everything on the list. Their message was that with the proper computer tools, stakeholders from multiple locations could provide input on marine planning options.

You wont have to go to all those meetings and yell at each other, said Dye.

Some in the room said that computers were not their preferred method of communication. Sometimes we like to go to meetings and yell at each other, said Driscoll, to the laughter of many in the crowd.

Hoffman mentioned the Western Snowy Plover habitat restoration at Leadbetter as a positive example of what can happen with stakeholder collaboration, without realizing that it is an issue of concern with some citizens on the Peninsula.

Naftali: Today we see a much weaker Mitch McConnell