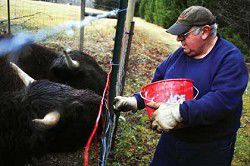 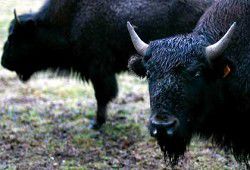 Maggie and Molly are Johnson's two female bison. He said that by this time next year he expects to have more than 20 bison on his ranch. Male and female bison both have horns.<I><BR>DAMIAN MULINIX photo</I>

Maggie and Molly are Johnson's two female bison. He said that by this time next year he expects to have more than 20 bison on his ranch. Male and female bison both have horns.<I><BR>DAMIAN MULINIX photo</I>

WILLAPA RIVER - Living on a 70-acre farm that has been in his family for 100 years, Raymond resident Bob Johnson is a prime example of a respectable farmer and community member. After years of raising cattle and contributing milk to Darigold, Johnson has recently stepped away from traditional methods to start a new farming venture - raising a herd of plains bison at Johnson's South Fork Ranch along the Willapa River.

"I've done a lot of things in my life," says 64-year-old Johnson, who brought buffalo to his property in May 2006. "I've started a lot of projects, and over the years I have helped start the EMS and transit systems in Pacific county, spent 25 years in the courthouse and was the county auditor for 19 years. I wanted a project othern than cows and there seems to be a growth in the demand for buffalo."

According to Johnson, the Raymond area is becoming a popular choice for development by retirees of the baby-boomer age group. With some of the new houses being used for summer homes and others as permanent residences, Johnson has chosen to take advantage of the market growth by developing and providing a healthy food source. As a healthy beef alternative, buffalo meat is considered much leaner than the average beef product and cooks at a lower temperature, around 160 degrees.

Officially referred to as "bison," buffalo date back as far as the Ice Age and faced extinction in the late 1800s when hides could bring in as much as $50 apiece. Despite the attempts to save them, Johnson says there are only three types of buffalo left in the world - the wood, wisent and the plains bison.

To make his business prospect a reality, the cattle farmer contacted a Sedro-Woolley resident, Dana Studebaker. With 20 years of buffalo-raising experience, Studebaker provided Johnson with helpful information, as well as a couple males to get started.

While he had bought the first two animals at the Sedro-Woolley ranch, Johnson says he was quite amused when he made a trip to Graham to purchase a couple females - who happened to live at the back of a very nice gated community.

Though Johnson had most of the required space and materials to house such large animals, he said one necessary change was to the existing fences.

"We had to have taller fences," he says, describing the six-foot-tall adult bison. "Buffalo can run at 35 mph and can leap a six-foot fence. The general rule is, if a buffalo can reach his head over the fence, he's out."

With two bulls, Bubba and Billy Bob, and two heifers, Maggie and Molly, to breed, Johnson says he isn't in the meat business quite yet, but will be in a few years. Though his four breeders are only two years of age, they will reach maturity around four or five and can live to as old as 25. At their young age, Bubba and Billy Bob each weigh close to 800 pounds and Maggie and Molly weigh around 650 pounds each. Feeding on home-grown grass hay and nibbles of bracken fern, the hefty ladies will weigh between 1,400 and 1,600 pounds, with their male counterparts tipping the scales at 2,000 to 2,200 pounds when they reach maturity.

Although these bovines weigh in at an incredible size, Johnson says their appetites aren't as hearty as one might think.

"Buffalo are very efficient on food, they consume less than cows. By living on the plains, they've learned to live on nothing - during the winter months, they can lose up to 200 lbs. and still survive."

Once he starts to develop a larger herd through breeding, he hopes to make a profit with help from a friend who has experience in the meat cutting business and making specialty products like buffalo jerky and sausages.

Having already attracted more than 500 visitors from Cub Scout groups, church groups and others in nearby areas, Johnson hopes to share his daily adventures with the public by creating more formalized tours in another year or two.

In the meantime, Johnson says he and his wife, Karen, are simply enjoying the company of his new farm residents. Janessa, their three-year-old granddaughter and the fifth generation to live on the family farm, has an early appreciation for bison and is proud to have Maggie as her very own pet.

Though the females aren't accustomed to human interaction quite yet, the friendly males will line up to eat apples, alfalfa cubes and other treats from their owners' hands. Such moments of bonding are what Johnson says he enjoys most about his new project.

Student shares frustration on possibility of having to leave US