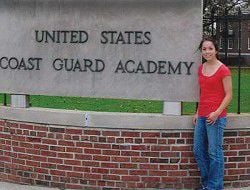 <I>Contributed photos</I><BR>Cameo Ulbricht visited the USCG Academy as part of the "Cadet for a Day" program and her experience helped her receive a scholarship to the academy in New London, Conn. 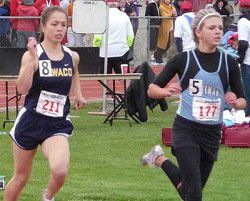 <I>Contributed photos</I><BR>Cameo Ulbricht visited the USCG Academy as part of the "Cadet for a Day" program and her experience helped her receive a scholarship to the academy in New London, Conn.

OYSTERVILLE - "When I was in the eighth grade I decided I wanted to go to the Coast Guard Academy. I love being on the water and I want to give back to my community and my country for all the things they have given me," 2010 Ilwaco graduate Cameo Ulbricht says. "I would like to be in a leadership role and the Coast Guard gives women the most opportunities to do that."

July 19 Ulbricht will leave her home in bucolic Oysterville and fly to New London, Conn., the home of the USCG Academy, where she will be sworn in the next day. She graduated from IHS June 5. "Right now I'm having fun hanging out with my friends and I'm busy moving my things out of my bedroom so my brother Ryan will be able to move in when I leave," she explains. "He's excited to get my room, but I know deep down he'll miss me."

Ulbricht will miss her parents, Rick and Ramona, as well as Ryan, her many friends, and her idyllic home in Oysterville. "I've been away for church and sports camps before, but this will be a big change for me. I'm sure I'll miss home a lot, but they will keep me busy in New London and then in New Mexico where I will go to prep school."

Path to the Academy The first 20 days at the academy will be orientation and then for three weeks in Roswell at the New Mexico Military Institute she will not be allowed to use a cell phone, computer, or telephone to communicate. "I will be able to write letters," Ulbricht states. She will go to the Military Institute from August until next May where she will get the equivalent of a two-year junior college education with a bend toward her military career in 10 months. Besides English, history, chemistry and math, she will also learn military discipline, integrity, teamwork, leadership, and go through rigorous physical conditioning.

"I was excited to be accepted to New Mexico because they have track and cross country programs and the other institute did not," Ulbricht explains. "I went to New London last summer as part of their Cadet for a Day program. The cadet I shadowed was a varsity runner and I was able to practice with her. I admit I was nervous as I knew I was being evaluated by the academy as to whether I was a worthy candidate, but when I began to run I felt at ease."

The academy's track coach wrote an influential letter that helped Ulbricht receive her $35,000 scholarship to New Mexico and if she maintains a B (3.0) grade average she will receive a scholarship to the USCG Academy worth about $275,000. Upon completion of her studies at the academy in five years, she will receive a full appointment to the USCG and a five-year tour of duty.

Ulbricht's scholarship acceptance letter states, "As a recipient you will be defending our homeland, saving lives, protecting our environment, and defending our freedom for years to come."

Life in Oysterville Cameo came to Oysterville to live with the Ulbrichts when she was six years old after a challenging beginning to her life. "I have always wanted to turn my past into a positive future," she says with quiet conviction. "It is better to look ahead and prepare than to look back and regret."

Ulbricht competed for the Lady Fishermen in four state track meets and four state cross country meets, finishing as high as sixth in both. "One of my favorite things to do is to run on the quiet roads around Oysterville and now I'll be able to compete in college," she humbly relates.

Besides running Ulbricht enjoys scrapbooking, camping, fishing and basketball. She was a member of the National Honor Society and leadership at IHS. On many family vacations to Minnesota she spent "hours every day" on the water. "I love to catch walleye and they are the best eating," she smiles. Her favorite class in school was English and fire cadet training. "I love to read and the fire training helped me consider the Coast Guard as a career."

Ulbricht says, "My parents have been the backbone to everything in my life. They encourage me to try new things, but also to stick with the old things I am good at. My godmother, Joyce Jones, has also guided me and given me many very valuable life lessons."

Another influential person in Ulbricht's life has been Ocean Park's Lou Place, a member of the local USCG auxiliary. "He gave me information about the academy and helped me get into the Cadet for a Day program. He gave me websites to look up and helped set up visitations at Group Astoria and Cape Disappointment."

Getting out on the ocean One item on Ulbricht's immediate "bucket list" is to go out on a 47-foot motor lifeboat. "As much as I love the water I have never been out on the ocean," she shyly admits. "I'm going to have to see if I can get a ride on a motor lifeboat before I leave for Connecticut."

A ship few people have been on is the Eagle, a three-mast USCG vessel that is the pride of that branch of the service. "Part of my orientation will be aboard the Eagle as we travel to South America and then to Canada," Ulbricht explains. "I want to see a lot of the world and definitely I want to live in different places in the U.S. That is a big reason I wanted to be in the Coast Guard."

As for running competitively for the military schools, Ulbricht laughs, "I never want to be last. I've competed with some fast runners in high school, but now I realize the runners will be even faster." She will major in government, leadership, or marine environmental science. "I know that one day I want to be in a position of leadership. I want to be prepared to make the difficult decisions and to also be there to support those who will be under my command. I'm grateful to all those who have helped me get to this place in my life and I don't want to let them down."

Ulbricht concludes, "I'm guessing that after I see other places in the United States I will still want to come back to retire in Oysterville." In the Ulbricht front yard there is a flagpole with the American flag and beneath it her dad proudly flies the banner of the USCG. It's a good bet those two flags won't be coming down any time soon.

Remembering the Original 9, the pioneers of women's tennis