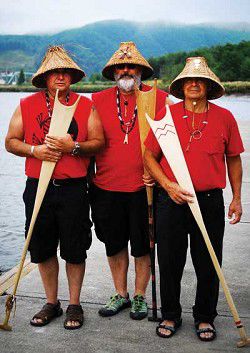 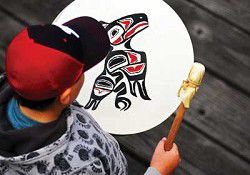 Gardner said Friday he is optimistic about the Chinooks' prospects for becoming a recognized tribe, an important status that brings prestige, federal funds and a renewed sense of self-esteem to people who have made their homes along the Lower Columbia River for several thousand years.

"They feel this will go right through," Gardner said, regarding the congressional staff.

U.S. Rep. Brian Baird said Monday, "We're not there yet but we've got a dang good bill." He said odds are "very good" the legislation will pass the House and that it then will be up to the U.S. Senate whether it makes it the rest of the way to President Obama's desk this year for a signature.

Any known potential objections to Chinook recognition have been dealt with over the past couple years during talks about earlier versions of Baird's legislation, which technically restores federal status for the Chinook tribe that was granted by the Clinton Bureau of Indian Affairs (BIA) but subsequently cancelled by the Bush administration.

"All reasonable concerns have been addressed," Baird said. These include last-minute modifications to make sure that any fishing and hunting engaged in by tribe members comply with state laws and don't conflict with rights already held by other tribes.

The latest bill, HR 3084, eliminated the need for a separate hearing before the U.S. House Ways and Means Committee by removing reference to the tribe's future tax-exempt status. All recognized tribes are tax-exempt anyway, since tribes are in effect sovereign governments within U.S. borders.

"Unless the committee has major concerns, and I don't think they do - this may be back to the full Congress in a week," Gardner said. Parallel legislation would then be introduced in the U.S. Senate.

"I hope that Sens. Murray and Cantwell will support this," Baird said. "I think they will, but I can't speak for them." He said Washington's federal senators have expressed an interest in the Chinooks' cause and have been following the legislation's progress through the House.

The BIA has been generally supportive of the restoration of Chinook rights, Gardner and Baird said.

The Chinook case has just been further strengthened by a vote of support from the Grand Ronde Tribe, which is centered in the Oregon Coast Range east of Lincoln City. The Shoalwater Bay Indian Tribe in north Pacific County previously passed a resolution in support of the Chinook. Other area tribes, including the Quinaults, which sought to block Chinook recognition in 2001, have remained silent until now.

Baird said, however, that the Quinault have just asked to be placed on Wednesday's agenda to testify, though he doesn't know the nature of what they wish to say or whether the committee has time to do more than accept written comments from them. Even if they are still opposed to the Chinook, "that shouldn't be a deal-killer," Baird said. No tribe or other interest group has veto power over the rights of other people in America, he noted.

Gardner said that although only he is currently on the Natural Resources Committee's agenda to testify for his tribe, he anticipates that both Hawks and Robinson will also have their words entered on the record. The hearing will be a crucial milestone in tribal history to which all three will bear witness, a key role in the oral story-telling tradition of the Chinook. Tribal attorney Michael Mason also will attend.

Explaining his strong feelings about obtaining federal status for the Chinook Tribe, Baird said, "It's about ending an injustice and getting history right." The whole matter has dragged on for decades, despite the manifest rightness of the Chinooks' case, he said.

"It would be hard to find a more significant tribe in this nation's history," Baird said, ranking the Chinook along side the legendary tribes that assisted the founding of the original 13 English colonies. Without the Chinook's life-saving support, it's easy to imagine the Lewis and Clark party would have perished in the winter of 1805-06, becoming little but a historical footnote instead of major national heroes, Baird said.

With restoration of their federal recognition, the Chinook have the potential to contribute as much to our region's future as they did to its past, Baird said. This will mean improved health care, educational and cultural opportunities that will enrich everyone's lives on the Lower Columbia, the congressman said.

"I'm really proud of this legislation," he said.

The Chinook Observer will report additional details next week following the committee hearing.

CNN reporter asks Harris what her first job will be. See her response