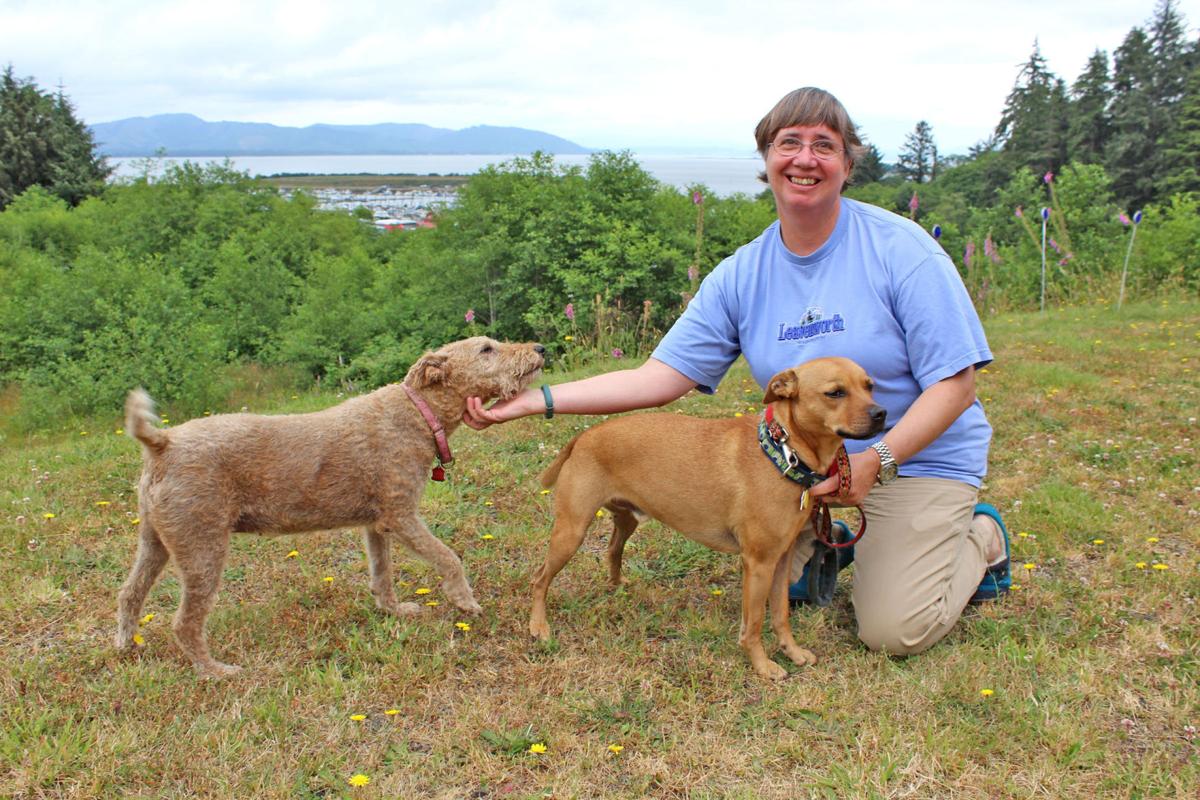 Agnes Waliser enjoys a quiet moment at home in Ilwaco with her dogs, Lola and Tommy. The professional lifesaver from Pacific County Fire District No. 1 will be honored by the American Legion at the weekend as the state Firefighter of the Year. 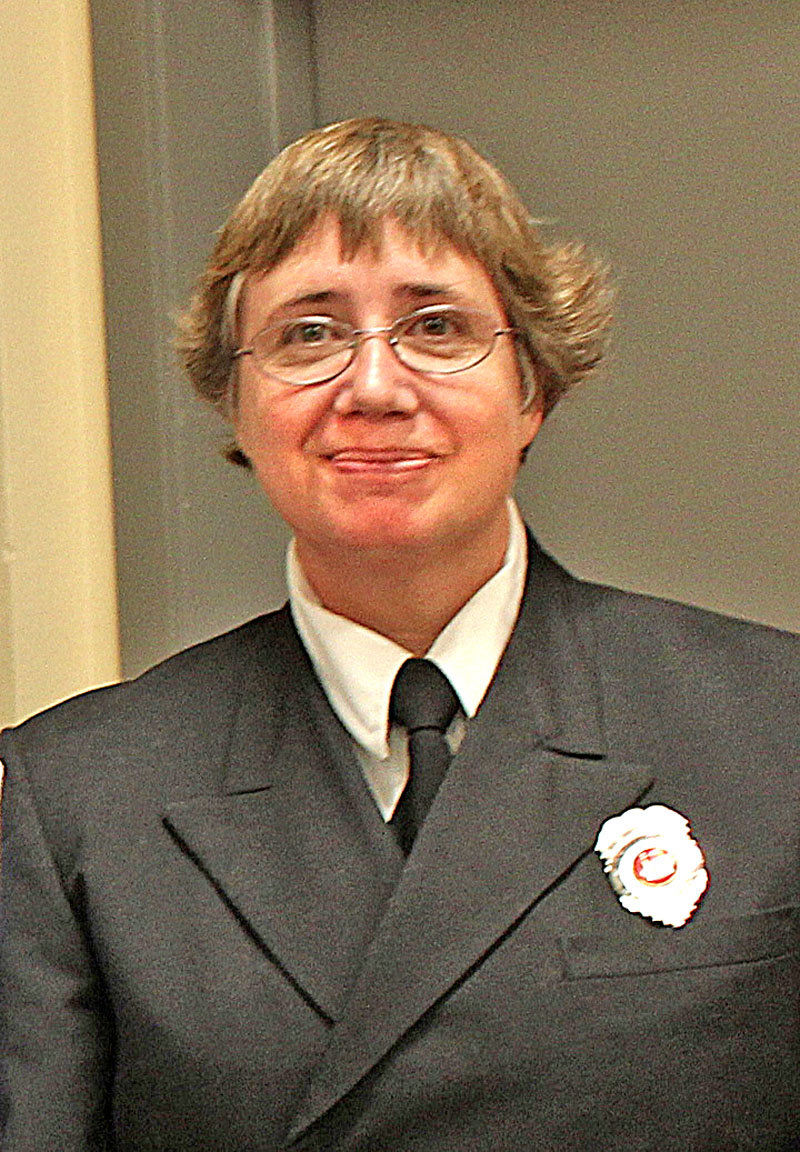 Agnes Waliser enjoys a quiet moment at home in Ilwaco with her dogs, Lola and Tommy. The professional lifesaver from Pacific County Fire District No. 1 will be honored by the American Legion at the weekend as the state Firefighter of the Year.

‘You can’t pass the buck to someone else. … You have to cope.’

2017 Washington Firefighter of the Year

Agnes Waliser didn’t set out to be a pioneering female firefighter.

She had a different career path in mind.

Growing up in Switzerland, Waliser watched ocean scientist Jaques Cousteau on TV and dreamed of strapping on her Scuba tanks and diving with dolphins.

Instead, Waliser is about to retire after a career as a professional firefighter on the Long Beach Peninsula.

But before she does, she will be honored this weekend at the American Legion state convention in Kennewick as Washington’s Firefighter of the Year.

“I know I was kind of a pioneer,” she said, noting that fewer than one in 10 firefighters nationally are women.

Waliser’s parents were Hungarian artists who fled to Switzerland when Russian tanks rolled into Budapest in 1956.

She grew up first speaking Hungarian then French in Lausanne, on the banks of scenic Lake Geneva. After earning a degree in zoology at her hometown university, and qualifying as a Scuba diving instructor, WaliserWaliser wanted to research the intelligence of dolphins. She began that path with an internship at the University of Hawaii and later studied killer whales in the San Juan Islands.

Life took a different direction when she met and married a man from Ocean Park.

Becoming a volunteer firefighter with Pacific County District 1 seemed natural, working with the Peninsula surf rescue team to use her Scuba training and strengths as a competitive swimmer.

She was the first female in Pacific County to become a Washington state certified firefighter. Adding to her experience and training with emergency medical technician and other credentials, Waliser was hired as a paid firefighter in 2001.

“We had female volunteers, but I was the first paid female firefighter with the district,” she said.

“I spent a lot of time trying to prove myself. I was female; I am not as strong as the guys — I never will be. But I felt I was ‘one of the guys’ fairly quickly.”

In 2007, after considerable competitive testing, Waliser was promoted to captain. She supervised a crew of four split between the Ocean Park and Seaview fire stations. She earned her certification as a fire officer in 2014.

Last month, she relinquished that role and returned to firefighter rank to ensure a seamless transition when she retires in early September.

“I wasn’t a bossy captain, it was all collaborative,” she said. “The welfare of my crew has always come first. I was the ‘softer’ captain, not one of those ‘type-A’ guys.’”

Gender has never been her biggest issue. Instead, she said, it is her voice. She has encountered numerous medical patients who could not immediately understand her questions — spoken in English, but in her noticeable Swiss-French accent. She said that sometimes co-workers have had to “translate.”

Her successor as captain, Matt Beaulaurier, said understanding Waliser has never been a problem for those on her crew. “We are used to her accent — we don’t even pay attention to that, although sometimes when we are dealing with older folks who cannot hear too well we have to help.”

At 6-3, Beaulaurier offers a contrasting build to Waliser, but he said there have never been any questions about her effectiveness. “Being shorter in stature, she is the type to find a way to work smarter, not harder,” he said.

He is full of praise for the manner in which she has made their job-swap a smooth transition. “She has helped me out in ‘passing the torch,’ so to speak. She has been so good to work for. She is someone who always puts others first.”

But back pain and sleep deprivation issues from 24-hour shifts helped Waliser make the decision to retire.

“I will miss it. I can still fight fire, but I am not as fast as I was,” she said. “It’s getting harder for me to do the physical part.”

Shift rotations mean repeated 24-hour stints then four days off. Crew members sleep during part of their shifts at the fire station so they are available to respond immediately.

“I don’t recover as fast as I did 20 years ago,” she said. “And even if we don’t have a call, you sleep with one eye open and one ear up. You have to be ready when the bell goes off.

“You have to be 100 percent ready — physically and mentally. You have to be on top of your game. Physically there is no chance to warm up your muscles.”

But Waliser, 51, has enjoyed these challenges

“I have loved the job,” she said. “I have enjoyed going to calls. Every one is a little different. You have to think on your feet — quickly figure things out. There’s a puzzle to solve quickly, so it doesn’t get worse.”

“You can’t pass the buck to someone else. You are 911 — you have to cope. You are ‘it.’ There’s definitely excitement in successfully figuring out how to resolve the problem and make it better.

“You can’t save everyone, but we certainly try. You have to put your heads together and figure it out. That is the very rewarding part of it.”

Away from the job, Waliser has continued her passion for working with animals at the Wildlife Center of the Northwest in Astoria. She and its late founder, Sharnelle Fee, shared many adventures, and she serves on its board.

After a divorce, Waliser remarried in 2011. She met her husband, Mark, through a shared interest in golf; they also encountered each other when her ambulance brought patients into Ocean Beach Hospital in Ilwaco where he worked as an emergency room doctor.

This weekend’s awards event will be her second time attending the American Legion convention. Waliser represented her District 1 colleague Joyce Tuerck, who died in 2015 one month before she could receive the Legion’s state EMT honor. She acknowledged that the awards generally highlight community service — going beyond the job.

That was reflected in District 1 Fire Chief Jacob Brundage’s recommendation letter for the local Legion award in November. “Whether it is random acts of kindness, or helping out a co-worker in need, Agnes is there to help,” he wrote.

Waliser noted she has fed patients’ cats when they are in the hospital, and joined with colleagues to purchase and deliver Christmas groceries for people they have aided.

“It’s the right thing to do,” she said. “We can’t help everybody, but if there’s a way I can do a little extra, I will.”

That, and a positive disposition are key. “Most people on the Peninsula have been awesome, but some people still come in and ask the guy firefighter their question, even though I am the captain,” she laughed.

She’s a willing role model, having spoken on a panel at Clatsop Community College about women in leadership roles. She relishes the chance to put on her uniform and drive the fire truck to schools during the annual Fire Prevention Week.

“I tell little girls, ‘You can do this, too. If that’s the career you want, everything is possible.

• When Agnes Waliser is honored as state Firefighter of the Year at the American Legion state convention in Kennewick this weekend, Harley Wait of Ocean Park will be honored as Washington’s emergency rescue technician of the year. He will be profiled in next week’s Observer.