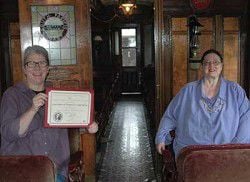 <I>KEVIN HEIMBIGNER/Chinook Observer</I><BR>Columbia Pacific Heritage Museum director Betsy Millard and collections manager Barbara Minard proudly hold a certificate they received Oct. 14. That certificate put the railroad car Nahcotta on the Washington Heritage Register of Historic Places. The car has been at the museum in Ilwaco since 2003. 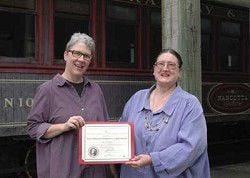 <I>KEVIN HEIMBIGNER/Chinook Observer</I><BR>Columbia Pacific Heritage Museum director Betsy Millard and collections manager Barbara Minard proudly hold a certificate they received Oct. 14. That certificate put the railroad car Nahcotta on the Washington Heritage Register of Historic Places. The car has been at the museum in Ilwaco since 2003.

The narrow gauge railroad car Nahcotta was built by Pullman's Palace Car Company in Chicago, Ill. The car was ordered on April 5, 1889 by Jacob Kamm and completed for shipment June 25, 1889 to the IR&N where it became an important part of "the railroad that ran by the tide," which fueled the economic growth in this region. It served the IR&N and its successor companies until the last run on Sept. 9, 1930.

With the significant amount of original material still under the present façade, the Nahcotta holds the physical record as an extant example of an 1889 narrow gauge Pullman passenger coach according to Minard. "There are only about 20 narrow-gauge cars still in existence." Following the closing of the railroad, the car was sold and used as a cottage. Another car was used as a cottage and is currently on North Alley Road north of Cranberry Road, but it was not a Pullman-made railroad car.

In the 1960s it was acquired by Henry Welzel, a private railroad collector. As a bequest in 2001 he gave it to the Ilwaco Heritage Museum (now CPHM). The Nahcotta returned to Ilwaco in 2003 and a covered courtyard and raised platform were built for its display just a half block from the original rail line.

"The Nahcotta continues to play an important role in the community as it is the center piece of the region's railroad interpretation and embodies much of the history of this quirky railroad which continues to fascinate the public," Minard said. "Its story has spawned several books, clubs, and an annual event, Clamshell Railroad Days held each summer during the third weekend in July at CPHM."

CPHM is located at 115 South Lake Street in Ilwaco. Hours are Tuesday through Saturday 10 a.m. through 4 p.m. and Sunday noon to 4 p.m. Thursdays admission is free, including seeing the railroad car, thanks to sponsorship by the Ilwaco Merchants Association.

FILE: JUDGE ORDERS "TIGER KING" OWNERS TO GIVE UP CUBS

He bonded with Biden over stutter. Then got call to speak at inauguration