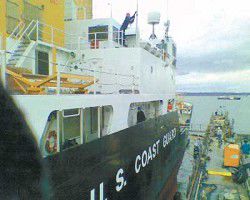 <I>Submitted photos</I><BR>The cutter Fir is worked on in drydock in Bellingham. 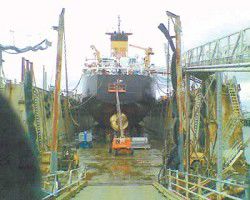 <I>Submitted photos</I><BR>The cutter Fir is worked on in drydock in Bellingham.

ASTORIA - As the commanding officer for the U.S. Coast Guard Cutter Fir, Lt. Cmdr. Mark Vlaun might not relish having his ship in the shop.

His 53-person crew took a 10-week break from their usual duties onboard the 225-foot buoytender in mid-January while the 5-year-old ship got its first regular scheduled $2 million maintenance at a Bellingham shipyard. The refurbished ship was scheduled to arrive back in the Lower Columbia midday Tuesday, and will then head to its home berth at Tongue Point for some high-tech engine tuning.

But for Vlaun, the break from the routine was made easier by the impressive nature of the work being done. He described the detailed process used to get the ship out of water and into Fairhaven Shipyard's massive dry dock.

"It's a pretty slick operation," he said. "The dry dock itself is like a shoebox without a front or back," he explained. That shoebox then is submerged about 25 feet so the ship can slowly navigate its way inside. Then, divers go under the ship's hull and strategically place wooden blocks underneath, so that when the water drains out the ship will be held firmly in place.

Only then will the vessel be ready for its "stem-to-stern" makeover job including about 80 separate projects, Vlaun said. Work will be completed on many of the systems on board, including an overhaul of the cranes and winches that hoist behemoth metal buoys out of the water and onto the buoy deck for repairs. Monitoring and fixing those aids to navigation makes up about 40 percent of the Fir's regular workload, and the remainder of the time they're working on the Coast Guard's other law enforcement and environmental protection missions, Vlaun said. Buoys weigh up to 9 tons and can be as wide as 9 feet across, so having top-notch lifting capability is always important, he said.

The hull of the ship was treated to a sandblasting and full repaint, giving the steel outer walls of the vessel protection from the elements. About five coats of anti-turbulent paint will be applied to the underside of the ship, creating a lasting smooth surface that will move Fir through the water efficiently, Vlaun said.

"The hull takes a beating in the salt water. It can corrode right through to the steel," Vlaun said.

The propeller was removed and given a buff and polish treatment as well, its seals were replaced and the completed mechanism was tested for full functionality, said Ensign David Pipkorn, Fir's public affairs officer.

"We want to make sure it's good to go for another five years," Pipkorn said.

While contractors complete most of the technical work during the dry dock, about one-third of the crew remain in Bellingham as inspectors to monitor the ship's progress. With so many tasks to complete, it's important that even small jobs are done correctly the first time, Vlaun said. As time gets short, work needs to kick into high gear, he added.

"It's an important collaborative process. It's been nearly 24 hours a day for the last five weeks. We haven't gotten much rest," Vlaun said.

While some of the buoytender crew did do a share of the maintenance jobs, a number of them returned to Astoria to clear out space at Tongue Point for the new boarding teams that will be arriving this summer from Portland as part of the recently announced Captain of the Port transition. Still others were able to go to get federal law enforcement training qualifications during the down time.

Several tests will be conducted on all the ship's systems before the cutter leaves Bellingham for its short trip to Seattle. The crew will also complete a couple of long days doing drills, getting back to the familiar rhythm of being at sea before making the 22-hour trip to Astoria, Vlaun said.

"It's a bit nerve-wracking getting back underway. It takes a bit of time to get comfortable again," Vlaun said.

'Don't come to Delaware' | With cases on the rise, Carney urges caution and asks neighbors not to bring COVID-19 here