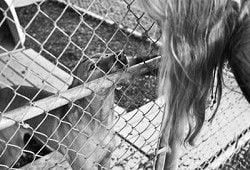 <I>DAMIAN?MULINIX/Chinook Observer</I><BR>Shelter director Diana Galbreath spends some time with Daisy, one of three dogs being cared for at the pound. 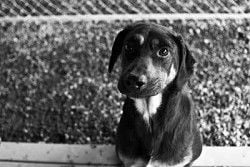 <I>DAMIAN?MULINIX/Chinook Observer</I><BR>Shelter director Diana Galbreath spends some time with Daisy, one of three dogs being cared for at the pound.

LONG BEACH - At the end of last week, an animal hoarding situation in Graham, just south of Puyallup, came to the attention of local rescuers and the network of women - from transporters, to resources providers, to shelter directors - moved into action. So far five of the dogs have landed at the Long Beach no-kill shelter with more to come this week.

"There is a lot more hoarding this year," says South Pacific County Humane Society Shelter Director Diane Galbreath. "Every year it gets worse."

"People may start out with a couple of animals - they feel sorry for them - but they can't get them all spayed or neutered and then things get out of control, and we need to step in."

Patti Mauldin of Valhalla Rescue confirmed that the situation in Graham just got out of hand.

"These people originally thought they were going to set up a rescue facility - it was a daughter and her father, and we think they did file a 501(c)3 with the state - but for whatever reasons, they just lost control of the situation. The father died and the daughter was in denial about what was going on," Mauldin said by phone.

She confirmed that there were 60 dogs on the premises and 15 cats. The dogs were all caged, many with a variety of illnesses from flea infestations, to tumors, to ear and eye infections.

"There were senior dogs that were heavily matted, one had lost the sight in one eye," she continued. "They were all manic and had never been out of their cages."

Mauldin said that the conditions on the property were horrendous. There was garbage strewn throughout the grounds and some of the dogs were living in cars. In fact, the bank had started foreclosure proceedings on the husband and wife owners of the property.

"Hoarding is a mental illness," Mauldin continued. "You have to gain the trust of the hoarders. You don't want them to shut down and start hiding animals. So we didn't come on in full force - the woman didn't want a whole lot of people on her property. We contacted Animal Control in Pierce County and just started slowly."

"She is living there with her husband, and they were living just as badly as the animals."

Anna Allred, Bay Center resident and board member of Harbor Animal Volunteer Association (HAVA), was one of the crew of women who mobilized to transport the dogs to other facilities for medical treatment and, ultimately, to shelters where they could be adopted out to permanent homes.

There are many steps in the process of rescuing animals from a property, and the whole process requires the coordination of many helpers.

"When we first got the call, I said, 'OK, let's do what we do,'" said Allred. "There are women who do the transporting, then there are others who have contacts for resources like food."

"You don't understand the scope of the problem when you're talking about 50 or 60 dogs - that many dogs eat 100 pounds of food a day. I just hauled 350 pounds of food and there's another 2,000 pounds coming from Olympia and 800 pounds from another source."

"Eight hundred pounds sounds like a lot of food, but that's basically a week's worth," she added.

Allred confirmed that denial was at play in the Graham hoarding situation. "When we first pulled up, the owners were sleeping in their car," she said.

Facebook is more than social networking. The animal rescue network up and down the west coast - from southern California to British Columbia - has connected on Facebook within the last year. It provides a means of communication utilizing postings of hoarding situations, calls for help with transport, and posted pictures of animals that need homes.

Local resident and educator, Robbie Richeson, is one of the instrumental forces in creating this rescue network.

"Unfortunately, I had a stroke on New Year's Day in January and I got bored really quickly. I couldn't walk and I couldn't hear out of one ear. And I couldn't watch television or read all day. So I got started on Facebook," Richeson said. "It went crazy."

"I started connecting up with other animal lovers and now I'm all hooked up with small no-kill shelters all up and down the coast. When I post out to my friends and they repost to their friends, it really works."

In fact, the network of women animal lovers have connected themselves in a complex web that extends geographically and across organizations. (Most of the women agreed that they have amazing husbands who get dragged along for the ride. "They must really love us," said Allred, "We're always saying, 'but it's just one dog!'")

Allred continued, "In north county, we tend to get more cats. But if I have a dog to place I usually call the south county folks." Once the women understood which organizations and individuals did what, the cooperation really took off.

Galbreath confirms, "We started talking to each other a couple years ago but this last year has been amazing. Everybody is really on the same page."

"We're not in competition with each other, we cooperate all the time. If we're down in numbers I might call another shelter and say, 'yes, go ahead and send us some dogs.' And if we get stuck, we make calls out."

Allred confirms that when they have extra kittens, she organizes a transport to Pumpkin Patch in Snohomish. They have a record of adopting out, on average, 10 kittens a week through their school visits and weekend petting events for families.

"And I just got off a transport leg from Mt. Shasta - there were some animals coming up from California because they needed our help up here," Allred said.

The Long Beach no-kill shelter has the capacity for about 18 dogs and three more in isolation cages. There is a bit more room for cats in the play room, but Galbreath says, "I don't like to count the cats, it gives me a headache!"

What you can do

Richeson remarks that the Long Beach shelter always needs volunteers for all kinds of tasks. They are especially in need of some younger, stronger ones.

"I go down and walk the dogs whenever I can. But we always need volunteers. Some of our volunteers are in their 60s or 70s and when a 50-pound bag of dog food gets delivered, it's great to have a teenager on hand to haul it in."

Galbreath notes that there are currently three Graham rescue dogs in the shelter, "Let's see, we have Daisy - a yellow lab mix, she's really friendly. Then there's Bear, he's a Shepard mix. And Lefty, a black lab and he might have some Great Dane in him too."

"They're all two years old and up and they've all been spayed and neutered. They probably need a few more days of acclimating but they should be ready for adoption by next week."

Adoption fees at the Long Beach shelter are a very reasonable $65. (In other places like Portland or Tualatin they can run upwards of $250 to $300.) While hoarder-dog situation goes on, Peninsula real estate broker Cheri Diehl is willing to pay half the adoption fee for any of the shelters current dogs in order to make room for more rescued pooches.

Richeson also noted, "Dennis Co. is going to donate a big bag of Blue Buffalo dog food for every dog adopted in November." In general, Richeson expressed thanks to everyone on the Peninsula for their tremendous support.

"We are so blessed in the Northwest to have no-kill shelters," she continued. "Oregon leads the way on this and Washington isn't far behind. But I'm sorry to say, in the Midwest, they still have puppy mills. But animals are not commodities."

For more information on the animal rescue network, check out the Facebook sites of Robbie Richeson and Patti Mauldin Valhalla Rescue.