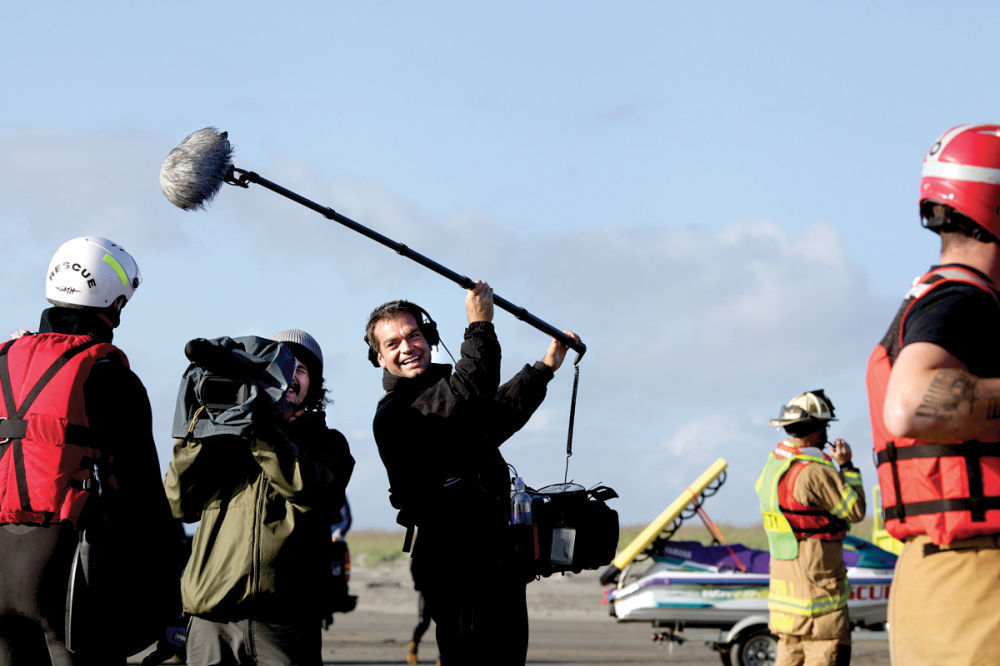 <p>Boom mic operator Peter Sample and videographer Reubon Dandoval interview Doug Knutzen following the joint surf rescue training drill Monday night at the Seaview beach approach. The film crew was on hand as part of the taping of a TV series about the Coast Guard. The South Pacific County Technical Rescue Team may be included in the show.</p><p></p> 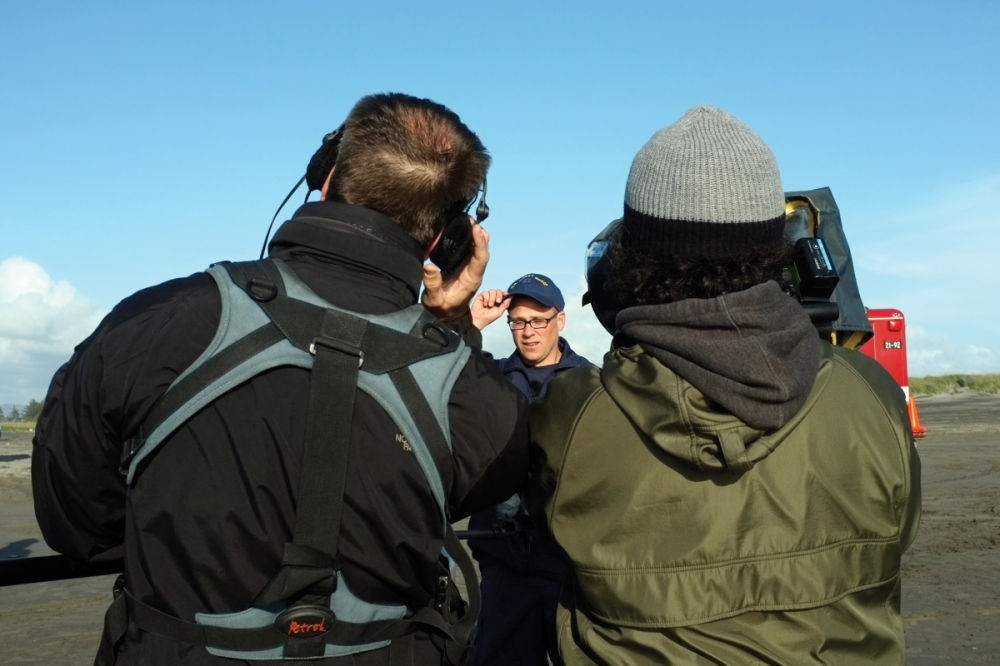 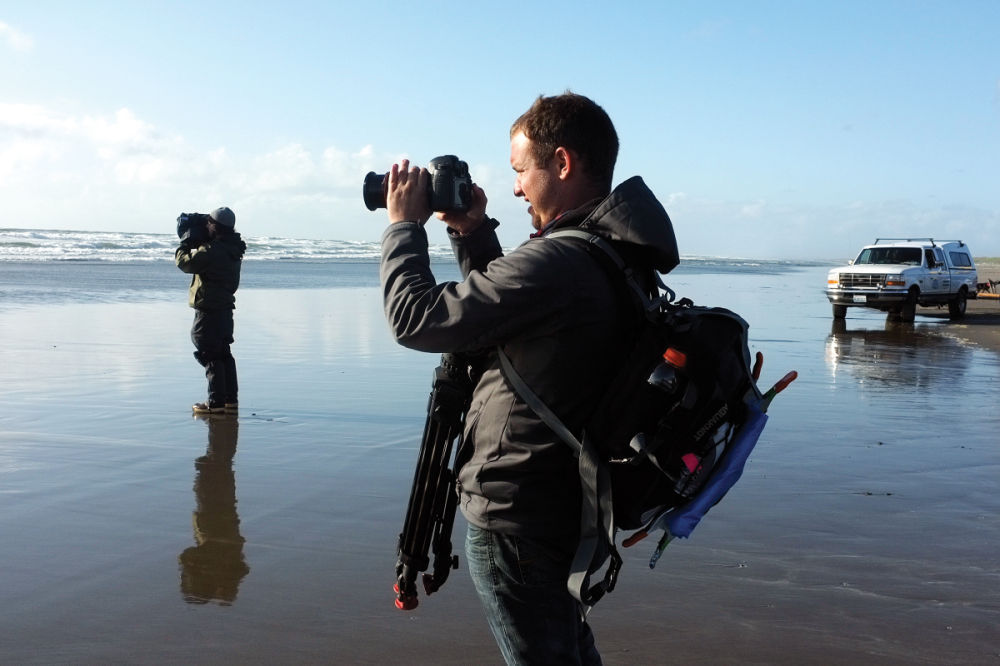 <p>Boom mic operator Peter Sample and videographer Reubon Dandoval interview Doug Knutzen following the joint surf rescue training drill Monday night at the Seaview beach approach. The film crew was on hand as part of the taping of a TV series about the Coast Guard. The South Pacific County Technical Rescue Team may be included in the show.</p><p></p>

ILWACO  The agencies participating in Mondays surf rescue drill had a bigger audience on the beach as camera crews from The Weather Channel recorded the action for an installment in their latest Coast Guard television series  Coast Guard: Cape Disappointment/ Pacific Northwest.

Following the footsteps of Coast Guard: Alaska and Coast Guard: Florida, the first season is expected to have 13 episodes following personnel at Station Cape Disappointment in Ilwaco and Air Station Astoria.

Series producer Cork Friedman says film crews have been in the area for almost two months and they plan to film here for a year to create a true documentary through the eyes of the Coast Guard.

The shows production company is Al Roker Entertainment with C. Russell Muth as the executive producer. Muth is creator of the Coast Guard series franchise  Coast Guard: Alaska is currently in season three and Coast Guard: Florida is wrapping up the end of its first season.

Muth says the location was chosen for the show because of the local Coast Guards long- standing tradition of life saving on the Oregon and Washington coasts.

And there are a lot of ingredients for pretty incredible weather, he adds. It goes on the Weather Channel so it kind of has to have decent weather conditions that justify being on that channel. And some of the conditions these guys encounter are the most severe in the country, so it only makes sense.

Friedman worked in both of the other locations and says his experience in the Columbia-Pacific region has already proved to be much different than anything hes seen before.

Its drastically different in every way and we hope to convey that on television, he explains.

Friedman says when his crew filmed in Florida, the district they filmed had a much different focus, with most of the action being law-enforcement related, such as drug smuggling and migrant intervention. Whereas while shooting the Alaska series, much of their footage was helicopter-focused.

The production crew at Air Station Astoria consists of two cameramen and a coordinating producer.

Upon arriving at Cape Disappointment, Friedman says he quickly discovered that he would need a slightly larger crew to be able to capture the excitement that develops aboard the 47-footers in 20-foot seas. So the Cape D film crew has four people, with two on the station premises at all times.

Friedman says the crews success partially depends on the personality of his cameramen and their abilities on the boat.

He admits that his hiring process for Coast Guard: Cape Disappointment/Pacific Northwest film crews was the opposite of what he usually does. Instead of scoping out the best cameramen around, he started with people who are already comfortable on boats and then taught them how to operate a camera.

They have to be extremely physically fit, Friedman explains. We dont want to be a liability on the water. They cant be looking over their shoulder worrying about us, they need their eyes on the water.

Friedman says when he filmed footage for the Coast Guard: Florida series, a helicopter was sent to respond if the seas were higher than 12 or 13 feet. But Lt. Scott McGrew, Station Cape Disappointment commanding officer says his limitations for response by boat are 30-foot seas and 20-foot surf.

One [cameraman] has already left, he couldnt get comfortable on the boat and was getting seasick, Friedman laments.

Friedman says its been a learning experience when it comes to shooting footage in area waters  he even had to purchase new equipment that holds up to being submerged by waves.

Saltwater is not kind to equipment, Friedman smiles. I drowned one on my cameras right off the bat  and I sustained some injuries. It became real obvious that this is going to be a real different animal to shoot  and hopefully it conveys that on TV.

Lt. McGrew, agrees. The first day it was windy, 40-plus knots, waves were stacked up on top of each other. It was miserable. There was rain, hail, the wind was howling. You had to find moments to breathe where there isnt salt in your face.

I have done a lot of boating, but it was humbling, Friedman states.

Muth adds, We had some surf conditions, but when we get into the season, its going to be tremendous.

McGrew says the addition of the film crew has been seamless and he is anxious for them to experience his departments busy season, as well as the Northwests unmatched weather conditions.

Over the winter, we had seven hours of sustained hurricane force winds, says McGrew. The rest of the country doesnt know the weather is like that here. On the East Coast, that would be all over the news, people would be evacuated! But for us, its just Tuesday. People just live their lives here.

McGrew says, What youre going to see is what happens on the water in the Pacific Northwest  Buoy 10, weve got tuna boats out there, the crab season, the summer recreational season.

If it involves a commercial size boat, its not quick, he adds. It makes for a long day, waiting for the tides to change to tow them across the bar. Nothing happens fast here.

McGrew says it isnt unusual for his crews to go out as far as 50 or 60 miles off shore and spend 18 hours at sea.

The show is driven by what theyre doing and them talking about it  hearing it from the Coast Guard in their own words and seeing their experiences through their own eyes, Friedman explains. The formula is to show what they do, how they train and the payoff.

People dont know what happens here, he continues. When they find out, theyre going to be absolutely intrigued with the Columbia River and the ebbing tide.

You can watch it and hear the Coast Guard tell it as they know it. Thats pretty special.

Muth confirms, I think were going to have incredibly dynamic, never-seen-before footage of these crews.

He continues, In this case, the jobs these guys do, its just unbelievable. Theyre all rockstars, theyre in shape and ready to go. And of course, there are women that work there, too!

Friedman says that the film crews will also be filming the Coast Guards interaction with the community, such as when the station had an entry in the Loyalty Days parade.

Muth says that since it takes approximately 150 hours of filming to be able to produce one hour of the show, the air dates arent confirmed yet. He estimates that the show will air starting in December 2014 or January 2015.

McGrew thinks that the show may bring notoriety to our area, as he has met people who made a trip to Kodiak, Alaska, specifically after seeing it featured on Coast Guard: Alaska.

What makes me so proud of this series is that its family friendly and an intelligent show, says Friedman. We owe a huge thank you to the Coast Guard for them allowing us to be part of their world ... We are experiencing things that other civilians dont get to see.

Station Cape Disappointment is top gun compared to everything else  and Ive been there, so I can say that! Friedman confirms.

To get the behind-the-scenes Coast Guard experience before the show airs, head down to Cape Disappointment this Saturday, May 18, for their open house and blood drive. From 9 a.m. to 3 p.m., the public will have the opportunity to tour the station and boats, see the rescue gear the professionals use, buy a barbecue lunch, donate blood for the American Red Cross, and schedule a vessel examination with the local Coast Guard Auxiliary.

There will also be representation from local fire departments, Columbia River Bar Pilots, Washington Department of Fish and Wildlife and others. A trolley will be available to shuttle those who cannot walk to the station from the Cape Disappointment boat launch parking lot.

He lost his husband to a deadly hurricane

NPR reporter: Pompeo asked me to find Ukraine on a map