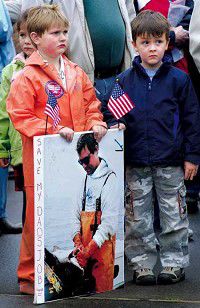 The protesters came in all sizes, including the two boys, above left, who produced a sign that read "Save my daddy's job, please." DAMIAN MULINIX photo

John Grocott of Ilwaco, right, and Brian Tarrabochia of Astoria, left, were two of the nearly 200 local fishermen and supporters at a rally last Thursday protesting proposed federal limits on ocean salmon fishing.

The protesters came in all sizes, including the two boys, above left, who produced a sign that read "Save my daddy's job, please." DAMIAN MULINIX photo

John Grocott of Ilwaco, right, and Brian Tarrabochia of Astoria, left, were two of the nearly 200 local fishermen and supporters at a rally last Thursday protesting proposed federal limits on ocean salmon fishing.

ASTORIA - Cutting fishermen's salmon catch is not the way to recover healthy salmon runs, commercial and recreational fishermen agreed at the Fishermen's Rally for Salmon Solutions Thursday in Astoria.

"Restricting fishing is not going to bring back the salmon," said Hobe Kytr of Salmon For All, well-known former director of the Ilwaco Heritage Museum. "It's a smokescreen to focus on fishing restrictions and then ignore the hydropower system."

A couple hundred fishermen and politicians at the rally in front of the Columbia River Maritime Museum voiced opposition to the Bush administration's defense of Northwest dams and policies that reduce fishing opportunities.

John Grocott, Ilwaco fisherman and alternate board member of Salmon For All, attended the rally and was pleased by the turnout.

"It's nice to see that there's so much support up and down the river and the coast," he said. "We're all harvesters in different manners of the same species and we're all very dependent on the salmon."

Studies have shown that the dams account for approximately 80 percent of salmon mortality in the Columbia River system, said Jim Wells, president of Salmon For All. Habitat loss accounts for another 15 percent, he said, and fishing of all kinds - tribal, commercial and sport - makes up the remaining 5 percent of salmon deaths.

But the government's response is to promote ways to curb fisheries.

"It'll kill coastal communities like ours, it's not the way to do it," Wells said.

U.S. Rep. David Wu spoke to the assembled fishermen and warned the administration, and Bush's environment and natural resources advisor James Connaughton, not to cut into the salmon catch.

The salmon crisis is the result of the administration's mismanagement of upriver water resources, Wu said, but the response to fishermen has been "a sharp stick in the eye."

He said that if the fisheries managers close the salmon season, fishermen should come back in August with a couple tons of dead salmon to dump at the National Oceanic and Atmospheric Administration regional headquarters in Seattle.

"If they dare to close our salmon season, we will lay the dead fish where they belong, at the doors of the people who made the bad water policy that caused the problem in the first place," Wu said.

He asked the administration to work toward improving ocean conditions, the Columbia's estuary, upland spawning beds and passage for fish around the dams.

Representatives of fishing organizations spoke up as well.

Zeke Grader, of the Pacific Coast Federation of Fishermen's Associations, said that the administration's "wrong-headed" policies call for "saving the dams, killing the fish and closing the fisheries."

"It's clear here that until we fix the problems of fish passage around the dams, and until we remove those four Snake River dams, things aren't going to get better," Grader said.

Ilwaco fisherman John Grocott agreed that dams, not harvesting is the root cause of the problem.

"I think they started building dams and didn't know when to quit," he said latter. "If those dams were removed then the Snake River stocks could rebound."

Looking at salmon from an angler's point of view, Bob Rees of the Northwest Guides and Anglers Association said that people get excited by the chance to come to coastal communities to fish. Together they spend millions of dollars while they're here.

"And now our government is telling us they want to take this all away," Rees said. "They have the audacity to point the blame at harvest ... while hydropower quietly sends millions of juvenile salmon through the turbines in the name of progress."

It's vital that fishermen from along the coast unite to oppose the administration's policy, said Dale Kelley, executive director of the Alaska Trollers Association. "The one thing we haven't tried is unity, and we must," she said.

"In a just world we would all be pursuing our livelihoods or our recreation," instead of making or listening to speeches, said Bruce Buckmaster. He said that there are "well-informed and powerful people" who know that cutting the salmon catch won't help, but don't want "any solution that is politically or economically inconvenient."

Grocott echoed that common sentiment. There's no point in blaming a dripping faucet for a water shortage when there is a broken mainline.

Prior to the speakers, Joel Kawahara of the Washington Trollers Association said that the rally was a way to protest and publicize the federal government's anti-fishing policies.

"I want people to know how badly the Bush administration is screwing fishermen," he said. The rally is a watershed one, he said, in that it's bringing all kinds of fishermen together.

Grocott emphasized that the salmon and the fishermen were not the only ones threatened. Entire communities were fighting for their existence.

"I don't know that the Peninsula realized how dependent on salmon that thay are, as far as the tourism goes and the local economy. When fishermen are doing well they're buying new trucks and eating at restaurants and buying marine gear," he said. "When the salmon stocks were down in the early 90s, the port of Ilwaco was almost empty. You could see the same thing with this kind of management attitude."

Another who attended was Bart Oja, a gillnetter from Astoria.

"The fish deserve water to be left in the river, that comes first," he said, a feeling shared by Grocott. The administration needs to do what is best for the salmon, not what was politically expedient or fiscally easy. "By attacking harvest and hatcheries they're trying to silence the voice of the salmon. I think that really is the issue."

Oja added that he hoped the rally would bring a change in policy and changes within the hydropower system.

Still, as a fourth generation fisherman, he said that he is optimistic that future generations will be able to fish the river.

"I'm always hopeful. That's the nature of being a fisherman."